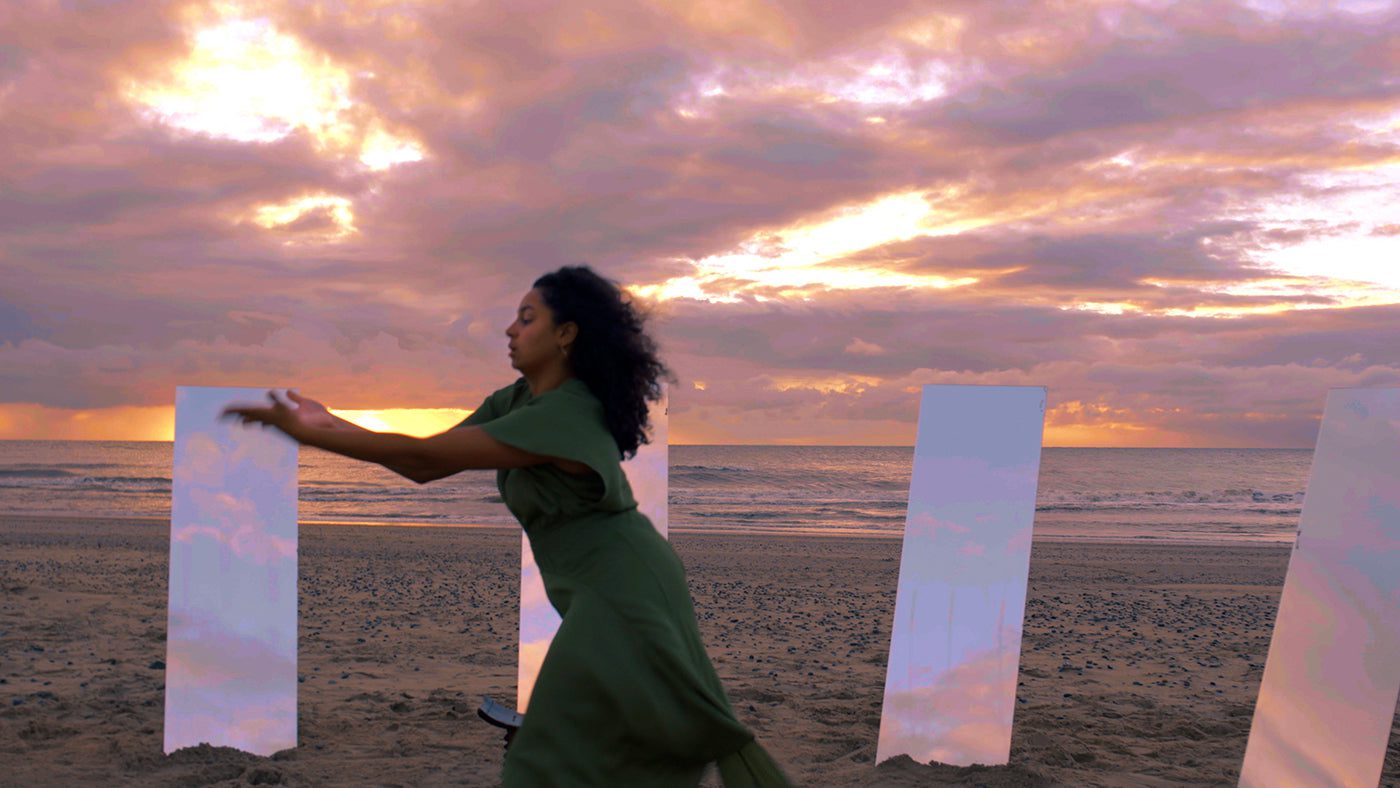 As Glasgow’s famous Tramway venue remains closed until further notice, Unlimited have commissioned a short film screening for those missing this superb live dance festival. This particular film is a superb example of the artists who would be participating on the stage throughout the spring, and feels entirely apposite, given its overarching theme.

We are, it seems in these tentative days of riding out the pandemic, always watching—watching space; watching our distance, watching eyes, watching our own reflections and those of others, watching reactions, too. Director Douglas Tyrrell Bunge’s film, with chillingly precise poetry, written and narrated by Ellen Renton, What Athena Saw When Tiresias Looked, takes as its jumping off point a kind of voyeurism—arguably, the original tale of the male gaze—the myth of the goddess of wisdom Athena and the seer Tiresias. Athena, according to some tellings of the tale, was watched bathing by Tiresias, caught by her, and so, as an act of punishment, she permanently blinded him.

In this absolutely exquisite, yet disturbing, short film, with an incredible, simmering postrock soundtrack by Lord Of The Isles, Athena (Anu Walters) dances a goading kind of goddess dance on the beach. She dips down low and sways upright, or mimics ecstasy with a back arched, hands running down her neck and through thick, dark locks. With a slender arm extended, beckoning, she starts spinning, fully in control of her movements like a mighty tree, yet always mindful of being watched by another. She is female archetype and prototype, dressed in a simple but tailored green dress, surrounded by a circle of freestanding mirrors. Her own gaze is thus reflected back many times, reminiscent of all eyes on her.

In direct contrast, the prophet Tiresias, portrayed by Douglas Reddan, is clad in white, and moves with bigger, bolder gestures and combative posturing. He seems blithe, insouciant, almost immune to any such notions of being gazed at. He swaggers. The verse states that, “he watched her like she was his inheritance,” “learned to live without edges,” and would “chalk clouds in his mind, then slink off.” Accordingly, he is something of a predatory figure, eyes darting with ever darkening thoughts—he is first shown hiding in the shadows with blood trickling down his face. He moves almost without second-guessing, without a care. The beach and the woods are his domain, the world, and seemingly women, his playground. At least, at first they appear to be—he is the epitome of toxic masculinity, of brute narcissism and entitlement.

It seems that the Jungian shadow self is being explored here—the psychologist Carl Jung spoke of the unconscious, darker aspects of the human personality, and also of the female and male energy forces contrasting in the opposite sex. Athena, with her powerful, curving body lines is Animus, the male side within the female; and Tiresias, all quick, sharp and cunning, is Anima—feminine energy inside of the masculine. Neither one—initially, at least, transcends the prescribed gender roles—until halfway through when Athena works her spell and roles are ever so subtly reversed; yet, conversely, the script is reframed through Athena’s eyes. Her vision emulates the vision of the audience, staring out at Tiresias, as his sight is magicked away from him, leaving him powerless.

Indeed, the closing shot is left deliberately portentous—as Tiresias skulks off, tail between his legs, the image behind him in the glass is that of Athena, watching, biding her time, and ever alert, perhaps to the next act of vengeance.Her next dance will have quicker, easier steps, as the choreography of settling scores is finally mastered.