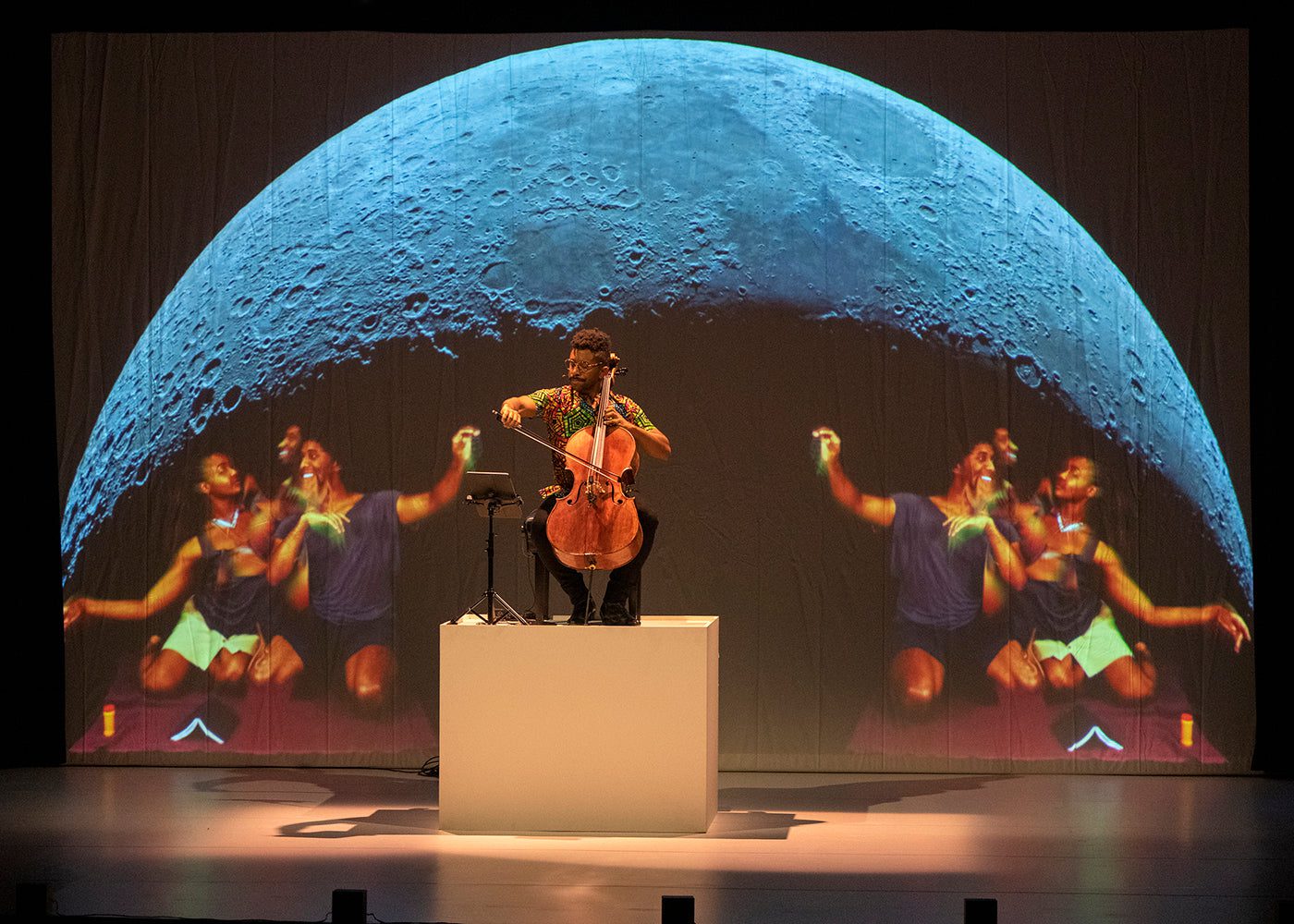 Honoring the past with stories from the Great Migration

Roderick George paints maps with his movement. In “asinglewordisnotenough,” his body trickles like delicate tributaries then trembles as if moving over rocky terrain. His legs extend to point in all directions—north, south, east, and west—and his arms carve out pathways, inviting travelers.

George is one of many collaborators on cellist Seth Parker Woods’ “Difficult Grace” multi-media recital which explores narratives and themes from the American Great Migration. The work premiered as a solo recital in 2020 and had its New York debut—dancer included—in November at the 92NY.

Woods is an accomplished cellist who recently accepted a faculty position at the prestigious Thornton School of Music at the University of Southern California. He was a 2022 Chamber Music America Michael Jaffee Visionary Awardee and has served as artist-in-residence for a number of national and international symphonies and music centers.

Woods began working on “Difficult Grace” while artist-in-residence at the Seattle Symphony. Charged with commissioning and creating a new work, he reached out to a number of contemporary composers, including Grammy-nominated Ted Hearne and Dev Hynes aka Blood Orange (who has worked with Solange Knowles, A$AP Rocky, and Jazmine Sullivan, and was recently at Madison Square Garden with Harry Styles).

Dance was the final component added to the program. George, an internationally celebrated dancer who has worked notably with William Forsythe and Cedar Lake Contemporary Ballet, is an old friend of Woods’: The two grew up together as high school classmates and gymnastics competitors in Houston, TX.

“We both went to Houston’s High School for the Performing and Visual Arts, and became connected through our academic classes,” George said. “Even so, until now, we never really had the opportunity to collaborate artistically.”

“To witness his brilliance over the years has been incredible,” Woods said of his friend. “He’s danced so many places. That body holds a lot of history.”

History—embodied and documented—is the driving force in “Difficult Grace.” Grammy-nominated composer and musician Nathalie Joachim was another commissioned artist on the project and, after bonding with Woods over a shared fascination with Isabel Wilkerson’s acclaimed 2010 book on the Great Migration, The Warmth of Other Suns, became Woods’ key historical advisor.

“When we first started talking about this work, I had just finished reading The Warmth of Other Suns,” Joachim said. “It really changed the course of my artistic practice, and I wanted to dig deeper into [the Great Migration].”

Living at the time in Chicago, she began looking into the archives of the historic Black newspaper the Chicago Defender.

“The notion of the Chicago Defender to me was so fascinating,” Joachim said. “It was published weekly, contained stories of migration and of people who had migrated not just to Chicago but to all of the great city centers that came to be as a result of the Great Migration.”

In particular, she and Woods were struck by the writing from one specific year: 1915.

“There is a pushback against calling Black people ‘negroes’ or more negative ‘n-words,’ but really reclaiming a power in referring to African Americans as ‘the race,’” Joachim said. “It was clear that this was an intentional shift, an empowerment to calling ourselves ‘the race’ as opposed to some forgotten or disregarded people.”

Joachim read through every issue of the 1915 paper. She read news stories, national and local, and letters printed from people writing to inform their kin that they had landed somewhere safely.

“There was a piece of music, a hymn that I found on one of the pages of The Defender, printed out. I think the title of it was ‘Praise God, We are Not Weary,’” Joachim said. “You see notions of self-care, of community support, this widespread movement to allow Black people to name the horrors that were real that the rest of the country was turning a blind eye to, but also to give people hope.” (Joachim quotes this hymn in her own piece for “Difficult Grace” entitled, “The Race: 1915.”)

“We were so captivated by those stories, many of which we connected to our own relatives and ancestors,” Woods said.

The Great Migration is often thought of as movement out of the South and into the North, Midwest, and West Coast, but many African Americans migrated within the South itself, from rural areas to urban ones. Woods’ native Houston is an example of one of these southern cities which saw a huge influx in population during the Great Migration, including members of Woods’ own family. Woods says he draws upon his family history when performing “Difficult Grace.”

“My mother always talks about how even in the early 1950s, when she was born, her mother was still a sharecropper—was still picking cotton in fields. Her water literally broke in the cotton fields,” he said. “It was after that, they finally packed up and left and moved to Houston.

“I did not live through the Great Migration, but I had ancestors who moved through that,” Woods said. “I am adjacent, in a way. ‘Difficult Grace’ is a way of me honoring these past histories that are very much still present.”

“When I’m in the space, I’m trying my best to truly unlock something and be carried by people that I hope are around me,” he said. “I always talk about my father who passed a few years ago and how I feel like I’m a dream of something that he’s always wanted to do. I have fulfilled that. I feel that he’s giving me a lot of vocabulary that I didn’t know I was able to speak.”