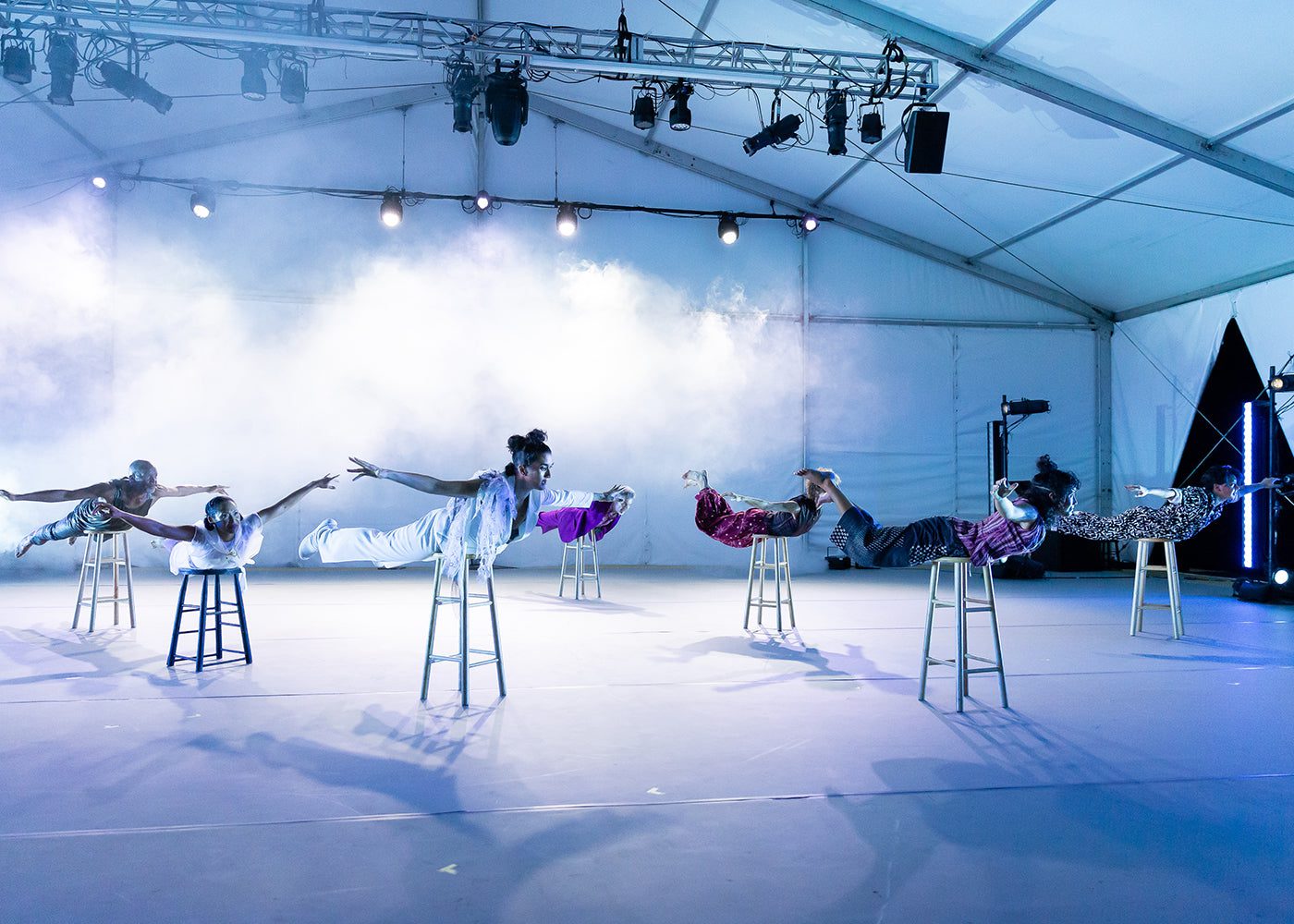 Some might consider that a circus tent deep in the Berkshire mountains, with a full moon rising, might prove adequate to evoke a gathering of witches. With the tent sides propped open to frame glowing sections of the woods outside, it was as if we had indeed joined a witches celebration in the forest. Despite this setting for her sold-out premiere of a long anticipated “Wicked Bodies,” Liz Lerman wasn’t taking any chances of leaving her audience in the dark. The evening began as an interactive experience to prepare us. Approaching the performance tent, we first encountered an altar designed by visual artist, Brett Cook, where we could each conjure a spell. Once seated inside the tent, cast members asked us to consider, “What are you the witch of today?” Though “Wicked Bodies” has been delayed two years by the pandemic, this week of the full Sturgeon supermoon, this locale of Jacob’s Pillow Dance Festival, our current moment of political culture, seemed perfect for an evening of stories about the outsiders and gifted people whom we have labeled “witch.”

The term itself is cast broadly in the show. My thoughts ran from Wicked Witch of the West, Glinda the Good Witch, Cinderella’s stepmother, Shakespeare’s “Macbeth,” the Salem witch trials, to the twitching of Samantha’s nose in TV’s Bewitched. Shaman, soothsayer, shape shifter, mystic, healer, sage, Wiccan, warlock—the term “witch” is not restricted to women or to supernatural ability. The stories related in “Wicked Bodies” are personal in nature. They are about identity, the experience of being an outsider, persecution, healing, love, family—the way we acquire beliefs about ourselves and the natural world.

Once the house lights dimmed and the music volume rose, the performers shifted from lec-dem mode into bird-like forest creatures to roam between and around the clusters of seating. Will Bond, who plays a kind of twitchy master of ceremonies engaged the audience in a Q&A about witch behavior. In constant motion, flashing a wicked grin, he projected a likeable presence but was perhaps not to be completely trusted as he verbally constructed the world we were about to enter. Then the witches were formally introduced: Ancestral Witch, Witch of T and Transformation, Blood Witch, Witch of In-between Places Seeking Grace in the Elsewhere, Witch of Blackness Who Carries the Wind in her Mouth, and Witch of Survival, who is a woman tried by King James I in the 1590s.

“Every witch has a story,” is one of many captions projected digitally, and each of the cast members has created a persona to reveal their story. The idea, conceived by Lerman after she viewed an exhibit of grotesque paintings and drawings of witches, was choreographed collaboratively with the cast that included Keith Thompson as co-choreographer and rehearsal director. Multi-generational, the dancer bios include such prominent companies as Bill T. Jones, Urban Bush Women, and Trisha Brown, along with an impressive range of educational credentials. In addition to Bond performers included Leah Cox, Miko Doi-Smith, Elisa García-Radcliffe, Nia Love, Paloma McGregor, Ruby Morales, and Vincent E. Thomas. The magnificent longtime Lerman collaborator, Martha Wittman, presided over it all, larger than life on the digital screen.

Each performed their own dance of eccentric gestures, while standing, crouching, and variously moving to and from the ground. When all appeared at once, it was hard to decide where to focus. Yet I began to see repeated gestures—the way the elbows can be raised as if to cradle the head while sinking into a crouch; plucking something from the air and caressing it between the palms, then tossing it away; the twitch of a shoulder; a particular crooking of the arm. In a post-show talk we learned that the group developed an entire alphabet of gesture that lends overall cohesion to the way they move.

There is much to take in: the sections where Bond breaks the fourth wall to speak directly to the audience and the witch’s stories told in movement and lyrical poetry are but one layer. There is a spell for witches and their familiars. One through-theme is that of birds and flying, and a section is given to the story of the last living passenger pigeon, Martha, whose death marks the species’ extinction. The digital screen is a constant, creating a changing atmosphere with collage, lines of text, color. During Thomas’ story of the Witch of In-between Places, a digital wall of rain appears as if to shower him. Paloma McGregor in an all-white pantsuit is a striking presence as she directs the witches in their activities. At certain imperative moments she appears like a bolt of lightning with a flash of thunder. She also seems to have a direct connection with the video presence of Wittman. For instance, during a particular movement demonstration—perhaps a spell?—Wittman says, “That’s not quite right. Do it again,” and the two repeat the phrase together. Because the scale of Wittman’s presence tends to overshadow the humans onstage, this connection, like the shared gesture vocabulary, is an example of how Lerman bonds the many elements of the show.

After intermission the focus gels as the story of each witch is related. The cast has now changed costumes from a shimmery black sorcerer theme to street clothes of brilliant colors that express their personalities: Bond, in a deep purple suit; Cox wears floral balloon pants; Love’s multi-colored skirt billows in waves as she twirls; Thomas’ shirt features shiny gold polka dots. This show of true colors serves to humanize the witches. We can identify with them. We’ve all had outsider moments or have been ridiculed or feared for our beliefs. We too could be witches, right?

Memorable is a duet with Bond and Cox, who are well-matched in performance gravitas. Their story as Witch of Memory and Witch of Revenge offers the suggestion of a trial—perhaps that of a witch persecutor rather than the witch—with Bond holding a flashlight to his own forehead while he repeats, “Do you promise to tell the whole truth.” Cox’s angular and spacious dance takes centerstage as she conveys the essence of torture she endured. In her revenge moment, she is an animal biting into the soft belly of the inert Bond. She holds a bit of innards in her mouth, then spits it out and sits in vigil over his body like a vulture.

That gruesome story is followed by a joyous one, where the Witch of T and Transformation (García-Radcliffe) has their breasts wrapped in a luminous strip of cloth. They become a gossamer dragonfly, with the two long ends of cloth extended behind them. Once bound, García-Radcliffe breaks into a huge grin and all the witches join in a lively disco dance moment, complete with flashing disco ball.

The show works like a spell. I saw it twice and as I write, I have been thinking about it for nearly a week. Like the best poetry, it eludes direct explanation. Rendering these witches as individual human beings allows us to feel the atrocity of how woman and other outsiders are treated. And yet there is wonder and awe—and at the end, a moment of elation as we hear Wittman’s voice compelling the witches to go to Texas (seemingly a current news reference to the state’s abortion ban) “Every country has a Texas. Every body must be protected.” As the stage fills with fog, the eight witches each balance prone atop wooden barstools (the best stage prop ever) and arch their backs into a swan dive. Like a flock of migrating birds, they fly.

Next
Inspiration in Mexico