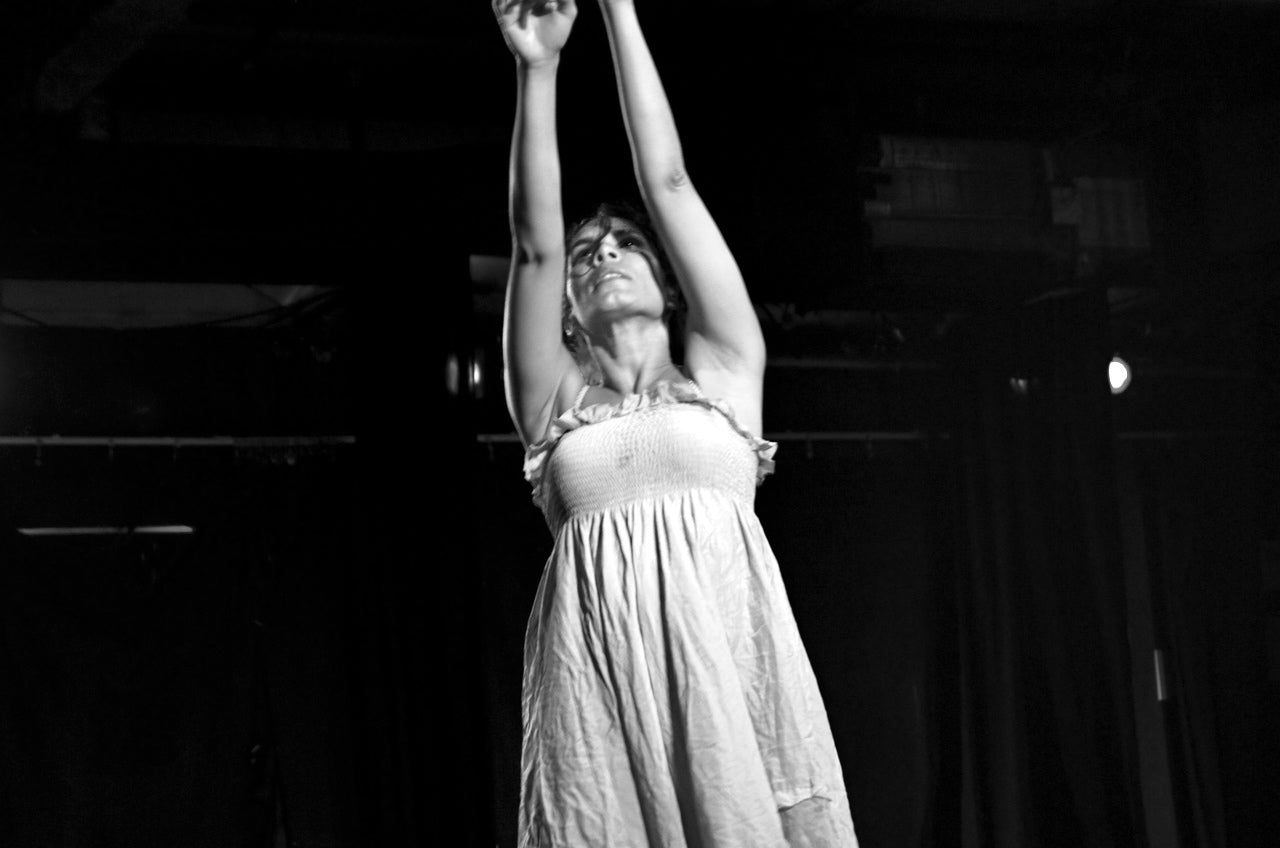 “I got an email from the director of the Pillow,” recounts Marsha Parrilla, cupping a mug of hot chocolate inside the warmth of a bustling Cambridge, MA, coffeehouse on a frigid February night. “She said I’m interested in talking to you about a potential opportunity, please reach out—and then I read it and I freaked out!” she laughs, her eyes beaming. “So I contacted her and she expressed interest in having us there for a residency.”

Originally from Puerto Rico, Parrilla is the founder and Artistic Director of Danza Orgánica, a contemporary dance theatre company celebrating its milestone tenth year in Boston, MA. She and her company were recently invited to hold a residency at the world-famous Jacob’s Pillow in Becket, MA, by its new director Pamela Tatge. From February 20 through 26, Danza Orgánica will be actively working at the Pillow. While the majority of the residency will be focused on creating new choreography, the company will also provide a community engagement component, presenting a Dance for Social Justice workshop and performing excerpts of its most recent work “Running in Stillness”—created to bring exposure to the emotional and physical issues faced by incarcerated women and their families—at the 10×10 Upstreet Arts Festival in Downtown Pittsfield, MA.

With the residency just a few weeks away, Parrilla took time to sit with me and discuss her story, her choreographic work style, and her vision moving forward.

“I do process-based work,” she explains. “I can do commissions, but I prefer even within a commission to go through the actual research method that will lead me to the process…that will lead me to who knows where! Even when I started [“Running in Stillness”], I had an initial idea of what would be interesting based on the collaborations that I wanted to get involved with, but I didn’t know what was going to happen until we were in it—in the process. That’s the way I like to work, as opposed to having a prescripted idea of everything at the beginning.”

And this process isn’t for Parrilla alone. It’s an active component of the company members’ work as well. She describes this as “happening in parallel.”

“I was doing a lot of research and bringing it to the company and then we were doing [movement] research together in the space. I went out and found our community partners, I did the interviews, I would then have [the dancers] listen to the interviews, so I was the one gathering information but they were also processing the material with me.”

These interviews for “Running in Stillness” gave Parrilla a first-hand glimpse into the world of penitentiaries and female incarceration. She found her interviewees through a group entitled Sisters Unchained—a now independent organization that was formerly a branch of Families for Justice as Healing. Yet their involvement didn’t end there. The women she interviewed gradually came to serve a larger role in the work, coming to rehearsals and mentoring Parrilla as the piece unfolded.

“This evolved, as did everything in the process,” Parrilla says. “Through [Sisters Unchained] I found the people who I ended up incorporating into the piece. Monique was formerly incarcerated. She came to rehearsals, she was involved in the entire thing. She would also fact-check things we did and make sure we did them right.”

When inquiring about her choice to interview only those not currently incarcerated, Parrilla explained her thought process and struggle. “[It] was the easiest thing to do without entering into this whole other legal process that I didn’t have the time for. I have the desire and energy, and I’ve applied for a grant that—if I receive it—is where I want to go next with this project, but at the time it was much easier to do this with people who have been incarcerated [in the past], because they could be [physically] with us. They could come to our rehearsals; they could tell their stories; they could speak freely. So there were many reasons why this was a better choice.”

Watching Danza Orgánica’s eight company members (Parrilla included) perform “Running in Stillness,” it is clear that they are each embodying the work uniquely. Even in unison, the goal is not to make sure all are identically in sync. Instead, each appears to remain their own person—maintaining a cohesive feel to the work without the traditional “corps” approach. When commenting on this, Marsha grinned and nodded.

“One thing I did,” she said, “is that I listened to one of the women that I interviewed and it became apparent to me that there were many, many layers to her personality. So what I did is I literally made different characters based on that. Then I gave the dancers different characters and they each explored that…So that’s why they are each so different. When you look at the piece, each one is so engrossed in their character, because from the beginning this is something they’ve been exploring: That process, through the eyes of that person.”

“It seems like you care about having them truly live the material,” I commented. “Absolutely,” she replied. “I encourage it!”

Parrilla’s engagement with social justice through dance spans the entirety of her career. Growing up in Puerto Rico, contemporary dance was not yet in her repertoire. Instead, she learned the vibrant traditional dances of the Caribbean—salsa, merengue, bomba, and rumba.

“Those were my introduction to movement and dance,” she recalls. “I started taking experimental dance when I was in college, while getting my B.A., and that was incredible, because it was an introduction to dance composition and to movement in a studio setting, but very, very progressive and interesting—and it was not about shape or right or wrong.”

Now grounded in theatre, dance, and visual art, Parrilla moved to New York, working as a bilingual educator in New York City public schools. She continued this work for the next eight years while pursuing a Masters in Dance Education from NYU.

“That [more clearly] defined my career. It came from being something I was really excited about—and doing all kinds of million things—to being defined with more focus.” And she chose the field carefully. “ I am an educator,” she said, sitting up proudly, “and I love dance, and I wanted to bring those two together. From there I was teaching dance and ended up moving to Boston in 2008. When I moved here I started from scratch, getting to know who was who, and knowing Danza Orgánica was me.”

Her work in social justice is in many ways a continuation of her work with merging dance and education, this time with the wider public in frame. Yet “Running in Stillness” is just one part Danza Orgánica’s upcoming residency at the Pillow. Her new work tells an unrelated story—one near and dear to Parrilla on a personal level.

“It’s completely different [from ‘Running in Stillness’] and it’s a piece that’s close to my roots as a Puerto Rican woman, but more broadly to the Puerto Rican community and the diaspora, and the issues that we face related to misogyny, race, and identity. Along those lines there is a whole political climate in Puerto Rico that is falling apart in many ways, and that has a lot to do with its relationship with the United States. So it’s very intricate . . . and at the same time, as a [Puerto Rican] woman who lives here, what does that mean? For my ancestors? So [I’ll be] delving deeper into my [own] upbringing, but I’m also looking into finding a character in history that did that, that took that leap, and what his or her experience was and how that can reflect what I’m looking for.”

Sitting for a moment to collect her thoughts, Parrilla goes on to put into words her reasons for diving into this particular project during her creation period at the Pillow. “The whole idea of the Puerto Rican identity, being able to work that, there, for me is really meaningful. I feel like I’m representing my country in a good way. I think it’s two-fold: I’m representing my community, but also I think Puerto Ricans don’t always get great opportunities. And a lot of us, when we get great opportunities, we are stereotyped. We are a maid in the movie, or the sexy whatever, whatever. I’m just excited about it being about nothing like that. I am exploring the Puerto Rican identity, and all that, but it’s in a very raw way—in a very historic place—so that’s meaningful to me.

As Parrilla prepares to bring the company to Jacob’s Pillow, it is clear she views this as an opportunity for both herself and her dancers to further develop as a whole.

“I love retreats with the company; I love when everybody gets to be together in a magical place, and that’s something I’m super excited about,” she beams. “To be able to go to the Pillow, for me, with a group of diverse dancers—our group is really diverse in many ways—the Pillow means something really beautiful for each one of us. Everybody has a different experience with it.”

And what is the experience Parrilla hopes, herself, to have?

“I want to take advantage of every little aspect of the residency—so the time, the space, the archives. And honestly just enjoy it and take it in for the amazing opportunity that it’s going to be.”

Marsha Parrilla brings Danza Orgánica to Jacob’s Pillow next week, Feb 20-26, where she will begin working on her new project. She aims to show excerpts of the new work through open rehearsals and small showings later in the year as it develops.

Next
A Language for Life