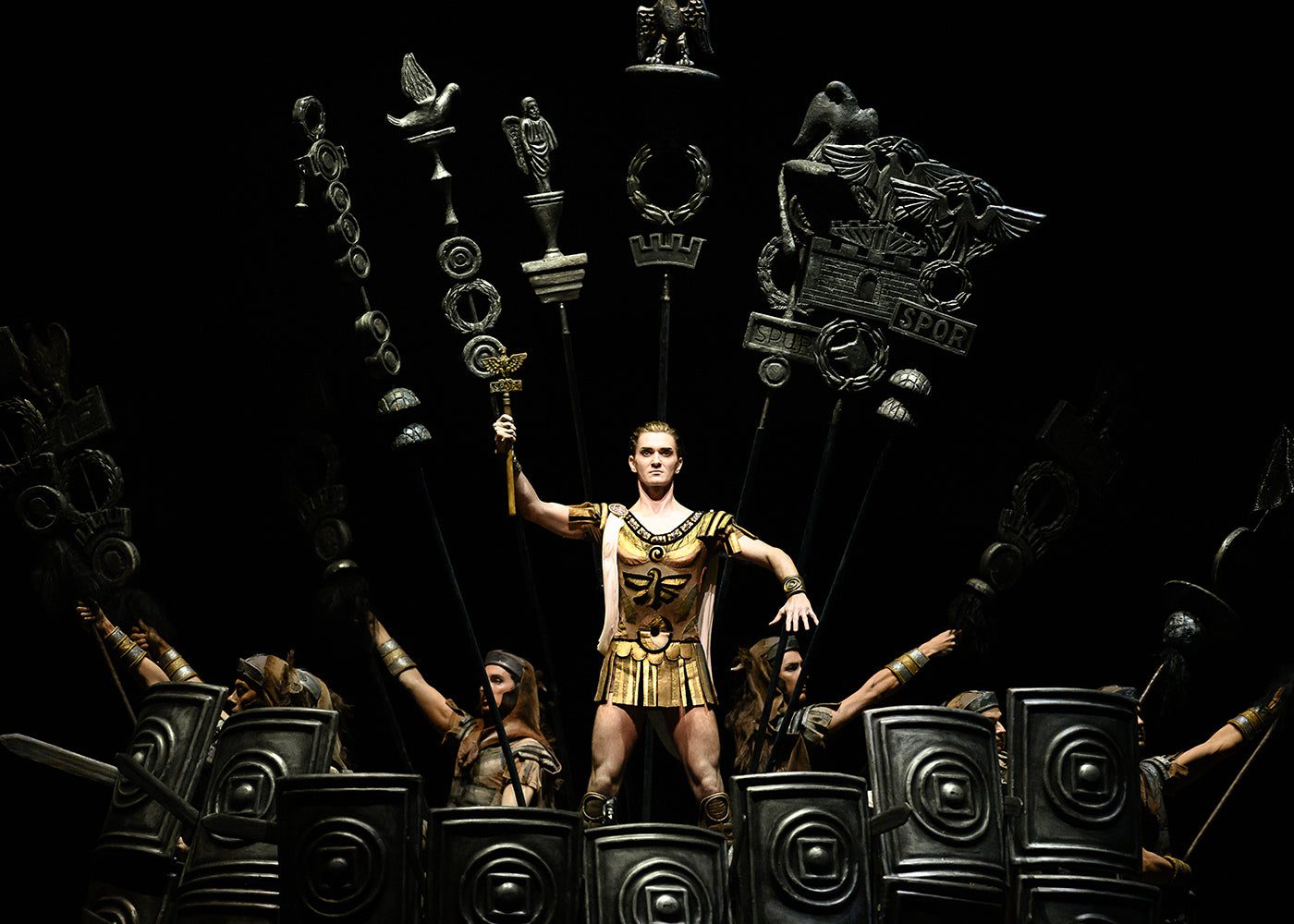 In the vast repertory of the Bolshoi Ballet, “Spartacus” holds a unique place. A thrilling mix of energy, athleticism and drama, this ballet is widely regarded as the famed Russian company’s most iconic work —the quintessential Bolshoi. Prominent dance critic Clive Barnes called it “the most successful Soviet ballet since ‘Romeo and Juliet.’”

In April, “Spartacus” was streamed by the Bolshoi Ballet part of the company’s online season, which also included “Le Corsaire,” “A Hero of Our Time,” “The Bright Stream,” and “Don Quixote.”

Based on a true story about a legendary gladiator named Spartacus, who led an uprising of slaves against Imperial Rome in the first century B.C., the Bolshoi’s production was often perceived in the West, during the Cold War, as an artifact of Soviet propaganda. Yet those times have been and gone; and, over the years, “Spartacus” has been embraced all over the world for its universal themes of heroism and struggle against brutality and oppression, with the title role being a brand name for the physical strength and athleticism of the male dancer.

The music for “Spartacus” was written by Armenian composer Aram Khachaturian, who began his work on the composition during World War II. Completed in 1954, the score was symphonic in sound and theatrical in nature, brimming with melodies dense with dramatic force and vigor. It was Khachaturian’s music that inspired Yuri Grigorovich—then artistic director of the Bolshoi Ballet—to create his own version of the ballet.

There were two productions of “Spartacus” to Khachaturian’s score before Grigorovich’s. The first staging was presented by the Kirov Ballet (now the Mariinsky), in 1956, choreographed by Leonid Yacobson and based on the libretto by Russian playwright Nikolai Volkov, who drew his inspiration from the novel of the same title by Raffaello Giovagnoli and from Plutarch’s “Biographies.”

In 1958, the Bolshoi Ballet unveiled its first “Spartacus,” also based on Volkov’s scenario, created by Igor Moiseyev. It was this version that first made it to the West, performed by the company in New York at the Metropolitan Opera House, in 1962. Yet neither of the two productions survived the test of time.

Grigorovich was an experienced choreographer when he made his own version of “Spartacus.” His artistic resume already included two original ballets—“The Stone Flower” (1957) and “The Legend of Love” (1961), both created for the Kirov (Mariinsky), where he danced as a soloist until 1962—and his staging of “The Nutcracker” (1966) for the Bolshoi Ballet.

To realize his vision, Grigorovich approached Volkov’s scenario as an astute dramaturge: he tightened the plot, omitted a number of secondary characters, thus streamlining the story and enhancing the flow of the action. In doing so, he ultimately created his own libretto, concentrating primarily on the four main characters: a gladiator-turned-military commander Spartacus and his wife Phrygia; and a leader of the Roman army Crassus and his mistress Aegina. The fight of Spartacus and his followers against Crassus and his forces constitutes the focal point of the ballet.

Grigorovich’s “Spartacus” premiered in Moscow at the Bolshoi Theater on April 9, 1968, featuring some of the greatest stars in the Bolshoi Ballet’s history—Vladimir Vasiliev as Spartacus, Yekaterina Maximova as Phrygia, Maris Liepa as Crassus and Nina Timofeyeva as Aegina. The production gained wide acclaim and enjoyed an unprecedented success with the audience. (On YouTube, there is a historical video, from 1970, with the original leading cast.)

Vasiliev’s portrayal of the title role is widely regarded as iconic as the ballet itself. Today he is one of the most recognized and admired male ballet dancers in Russia. As homage to his legendary career and to commemorate his 80th-anniversary, the Bolshoi Ballet scheduled the streaming of “Spartacus” on his birthday, on April 18. (The company planned to celebrate the event with a special gala, which was canceled, as was the rest of the season, because of the Covid-19 pandemic.)

Visual spectacle and high-octane theater permeate this “Spartacus” from start to finish; the action moves with an ample speed; and the suspense and dramatic conflict build up gradually but steadily. Grigorovich constantly switches the action from one warring army to the other: contrast, tension and dynamism are the key principles of his choreographic concept.

Divided into three acts, the ballet unfolds as a visually gripping kaleidoscope of solos, duets and group dances. The solos are envisioned as intimate, psychological monologues, revealing the inner-world of main personages; while the extensive ensembles create an apt juxtaposition between the two opposite camps: Roman soldiers and regal patricians versus the rebellious slaves.

Mikhail Lobukhin was utterly compelling in the title role. From Spartacus’s first moment onstage, as a captive in chains; to the central scene of the uprising, when he emerged as a brave freedom fighter; to the tragic moment of his death—Lobukhin played and danced his role with conviction, delivering a poignant account of the tormented world of the hero-gladiator.

A dancer of formidable physique and strength, he was impressive in his high and mighty jumps, all executed with ease and abandon. His space-devouring leaps looked like an unbroken flight, his feet barely touching the ground; and his partnering skills in the athletic duets with Phrygia were splendid.

One of the most exciting male principles in the Bolshoi’s roster, Vladislav Lantratov gave a terrific portrayal of a ruthless General Crassus. He infused this role with loads of charisma and nervous energy, accentuating a devious nature of Spartacus’ nemesis. Performing with virtuoso technique and panache, the dancer made his character a truly magnetic presence onstage.

Anna Nikulina was a gentle and loving Phrygia. With nuance and ardor, she captured the transformation of her heroine from a fearful slave in Act I to a symbol of courage and hope as she mourned the death of her husband in the ballet’s monumental finale. Lithe and poised, she brought much needed subtleness and harmony to the story; her affecting love duets with Spartacus inspired some of the most poetic moments of the ballet.

The visually striking choreographic imagery floods this “Spartacus” to the brim. The ballet opens with an eye-catching scene: a lone figure of Crassus towers above the dark stage, frozen in stillness, like a statue. He is surrounded by a barrier of silver shields of his soldiers, who, a few seconds later scatter across the stage—wave upon glittering wave—creating a breathtaking, pulsating with movement, formation.

Throughout the ballet, there are multiple images with religious connotations from “Crucifixion” to “The Removal from the Cross” to “The Emplacement on the Tomb.” The ballet’s final tableau, depicting the sorrowful Phrygia grieving over Spartacus’s body, is vividly reminiscent of Michelangelo’s Pietà.

Moreover, in his “Spartacus,” Grigorovich elevates the ensemble choreography, giving great prominence to the male corps de ballet. The Appian Way scene of Act II, in which Spartacus calls upon the shepherds to join the revolt, presents one of the most electrifying male dancing in modern ballet. The power of that dancing, fueled by testosterone and adrenaline, reflects the essence of the Bolshoi’s trademark style as well as the dedication of each corps dancer in the performance.

Previous
On the Front Line