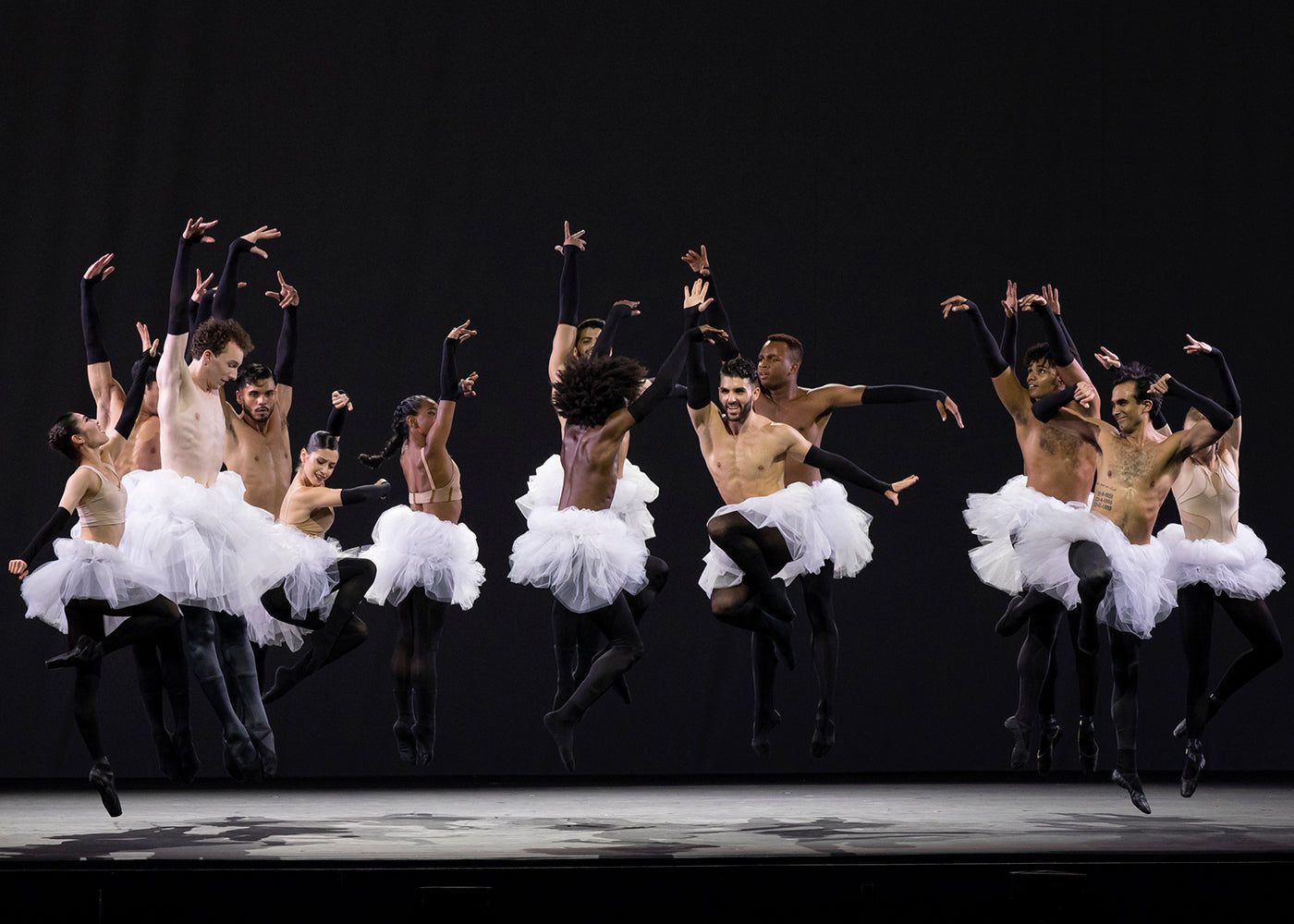 “One for All” by Annabelle Lopez Ochoa at BAAND. Photograph by Erin Baiano
Faye Arthurs·
Reviews
·8

For the second year in a row, Ballet Hispánico, Alvin Ailey American Dance Theater, American Ballet Theatre, New York City Ballet, and Dance Theater of Harlem came together for a week of free performances at the Damrosch Park Bandshell. There were way too many titles and slogans involved: it was officially the BAAND Together Dance Festival within Lincoln Center’s Summer for the City Festival, for which the tagline was: Remember, Reclaim, Rejoice. These phrases were plastered around the stage and surrounding areas. More simply, these shows are Lincoln Center’s attempt to create a summertime version of City Center’s successful Fall for Dance Festival, which is a great idea—though it needs more organization and streamlining in almost every respect. Case in point: the Reunions Dance Festival, the Summer in the City event I saw last weekend, started 10 minutes early without warning. The BAAND show started 40 minutes late, also without any communication. BAAND was delayed for lightning, which would have been helpful to know via email or text for those with advance ticket reservations, and kind to announce verbally to everyone standing forever in line. Instead, it was a frustrating mess with the confused audience queued up around the block for an eternity in intense heat and, apparently, the threat of lightning.

I must complain about the inadequacy of the digital programs for these multi-fests too. The Reunions program link was sloppy and incomplete, lacking musical credits entirely. The QR code for the BAAND shows landed you on Lincoln Center’s website, where you had to click on more offshoot links to get casting and other details for each piece separately—sometimes on a company’s website, sometimes not. During yet another long show without an intermission, it was like pulling teeth to figure out who and what we were seeing—and this after an announcement not to use our phones in the audience! Maybe you get what you pay for. City Center charges a nominal fee for Fall for Dance (when it began 19 years ago it was $10 a seat, this year of inflation it will cost $20). Perhaps that small sum goes farther than I thought. Or was the chaos just part of a nascent festival working out its bugs: BAAND’s terrible two’s? If it returns next year, I hope Lincoln Center can get its administrative act together. And I hope it does return, because the dancing is generally great—which you’d think would be the harder part to deliver on.

The innovation in year two was the addition of a crossover collaboration piece, using members from all five companies. This dance, “One for All,” was choreographed by Annabelle Lopez Ochoa, who has made works for most of these troupes separately. “One for All” kicked off the show with a bang, with AADT’s fabulous Chalvar Monteiro leading the cast of 14 in fierce moves to the fun mashup “Manteca” by Funky Lowlives/Dizzy Gillespie. The dancers all wore white tutus with black tights, with the women (a few of whom wore pointe shoes) sporting flesh-colored leos on top. It was a flashy rumpus, a candy-coated gift after all that waiting around. It also set the tone for the evening, and if this show and Beyoncé’s “Renaissance” are any indication, we are indeed heading into a roaring ’20s redux.

This fun, multi-company orgy was unfortunately followed by three long speeches. It is important and necessary to thank donors and sponsors, of course, but considering the tardy start, cuts in small talk could have been made. Though I very much appreciated when Mara Manus, the executive director of the New York State Council on the Arts, expressed her “gratitude to the dancers who didn’t give up” during the pandemic. It was also neat to hear that “One for All” was finished just that afternoon, since that was the first in-person meeting between the full cast. I wasn’t surprised, but I was impressed given its crisscrossing traffic patterns.

At long last, Constance Stamatiou of AADT took the stage for the physical and emotional marathon that is Ailey’s solo, “Cry.” I didn’t envy her in her long-sleeved white leotard and voluminous ruffled skirt, carrying a thick white shroud in the hot muggy air. By the final movement, she was drenched in sweat, her costume plastered to her.  She must have been miserable, but her soaking only enhanced her excellent and committed performance. Her full-body glandular outpouring echoed her dramatic catharsis.

Ballet Hispánico followed with “Con Brazos Abiertos” by Michelle Manzanales. It was wonderful, though it would have benefited tremendously from an intermission before or after it, since it was one of the lengthier pieces on the program, taking viewers on a thoughtful journey through Mexican symbology—and stereotypes—within American culture. Much as “Tiburones,” BH’s contribution last year (by Lopez Ochoa), examined Puerto Rican-American appropriation, “Con Brazos Abiertos” wielded humor and mockery (including the interspersal of racist jokes and campy tunes) alongside spellbinding, reverent representations of authentic folkloric music and dances. Dandara Veiga was terrific as a woman uneasily straddling Mexican and American heritages, especially in a solo of snaky floorwork in which she kept a giant sombrero aloft using her feet, her elbows, her knees. But it was the polish and élan of the group dances that really made the piece sing. The BH dancers are talented and expressive; they read as individuals even while possessing the best cohesion and togetherness in timing of all five troupes. Kudos to whoever designed the warm, sunset-orange lighting. The costumes were also great—and also uncredited—especially the gigantic unisex skirts in the finale.

Dance Theater of Harlem brought Helen Pickett’s slight, if pleasant, pas de deux “When Love.” The revelation here was dancer Amanda Smith, who was also a standout in “One for All.” Smith is a passionate and supremely musical dancer. Her sustained rapture here made me want to see her dance Juliet someday. Her dancing was another high point in an evening stacked with knockout individual turns (Monteiro, Stamatiou, Veiga). But ABT’s luminous Sunmi Park gave them all stiff competition in “Children’s Songs Dances,” by Jessica Lang. Park was in good company, all seven in the cast were strong, though three of them are still apprentices with the company and the other four are some of the newest corps de ballet members. ABT’s next generation is clearly overflowing with talent. Andrew Robare, a recent ABT Studio Company star, looks ready to waltz right into David Hallberg’s old rep with his princely mien and perfect proportions.

These young dancers brought Lang’s inventive choreography, set to piano pieces by Chick Corea (played live by Emily Wong), to nuanced life. And given the bombast and emotional intensity of the rest of the programming, these quiet dances were the hardest sell on the bill. No matter, Lang and her cast drew you into their engrossing world. “Children’s Songs” is like a moodier version of Jerome Robbins’s “2 & 3 Part Inventions.” Lang’s cast sported floaty practice clothes in lavender and blue (styled by ABT principal Isabella Boylston) in contrast to Robbins’s crisp whites, but both ballets have an innocent air and were made on young dancers. (“Children’s Songs” was created for a digital performance by ABT’s Studio Company during the pandemic; “2 & 3” was made on School of American Ballet students.) Lang’s piece touched more on fantasy: her youngsters, it seemed, could still see the fairies. Although the ballet stressed the performers’ youthfulness, their collective poise and stellar technique made it read as highly professional. I would not have known this was ABT’s junior league if I hadn’t seen the Studio Company so much.

New York City Ballet closed out the evening with Ulysses Dove’s “Red Angels,” which I fully expected to bring the house down. Set to a propulsive electric violin score by Richard Einhorn, which is always played live by Mary Rowell, it is generally the closest that ballet gets to simulating a rock concert. Unfortunately, with the exception of Davide Riccardo, the cast looked tentative and uncomfortable. They resembled deer in headlights walking on eggshells. It was surprising, and a total letdown. They were all debuting, and “Red Angels” is intensely side lit, which is disorienting, so I’m sure that contributed. But every other company really threw down while faced with intense challenges of their own. I mean, Stamatiou delivered hard for nearly 20 minutes in yards of soggy fabric under hot lights. And the young crop from ABT pulled off harder steps on pointe without mincing around. I sincerely hope that the City Ballet dancers settled in and found their inner divas for the subsequent performances, because that first night, the show opened with a bang and ended with a whimper.

Next
For Mythili Prakash, Bharatanatyam is Personal