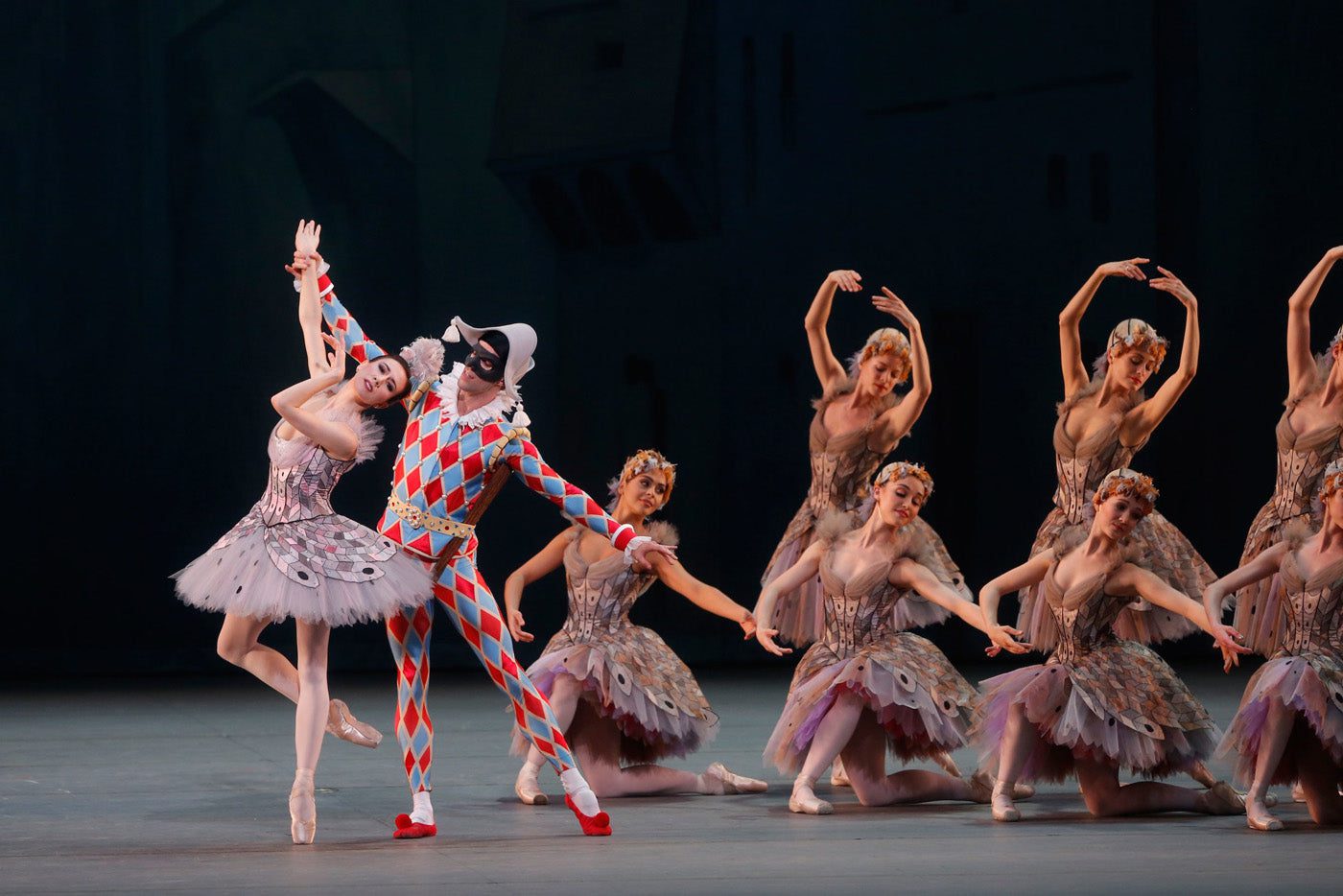 American Ballet Theatre unveiled world premiere of Alexei Ratmansky’s “Harlequinade”—an opulent reconstruction of Marius Petipa’s “Les Millions d’Arlequin”—at the Metropolitan Opera House on Monday, June 4. This is yet another large-scale production by Ratmansky for ABT, where he is artist in residence. Last year, the company premiered his evening-long take on Richard Strauss’ ballet “Whipped Cream,” which was part of ABT’s Ratmansky Project: “a five-year, $15 million fund-raising drive to support the creation of at least one new work a year by Mr. Ratmansky,” according to the New York Times.

Just like his “Whipped Cream,” the newly restored “Harlequinade” is an elaborate ballet-extravaganza, where designs, props and costumes take center stage. The set decorations and the dancers’ wardrobe, created for this production by Robert Perdziola, make for the strongest element of the show, reflecting the luxury and splendor of the Russian Imperial Court for which French choreographer, Marius Petipa (1818-1910), was a long-serving ballet master.

Petipa created his two-act “Les Millions d’Arlequin” at the age of 82, his best creative years and his masterpieces such as “The Sleeping Beauty,” “La Bayadere,” and “Don Quixote” far behind him. He based his libretto on the popular commedia dell’arte story about the quest of the penniless and crafty Harlequin to marry a beautiful Columbine despite disapproval of her greedy father. A lighthearted comedy, this new ballet was destined to honor Russian Tsarina Alexandra Federovna, wife of Tsar Nicolas II. The premiere took place on February 10, 1900 at The Hermitage Theater in St. Petersburg, with the royal family and members of the court in attendance. The starring role of Columbine was danced by Matilda Kshesinskaya. (Her romantic relationship with Nicolas II was the subject of the recent movie, “Matilda” (2017), which created quite a scandal in Russia even before the film was released.) The role of Pierrette was danced by prima ballerina Olga Preobrazhenskaya. Riccardo Drigo, the ballet’s composer, conducted during the premiere. The Tsarina was very pleased with the production; and three days later the ballet received its first performance at the Imperial Mariinsky Theater, remaining in the repertory for more than two decades (there were some 50 performances in total) until it was permanently dropped in 1923.

New York’s ballet audiences are no strangers to “Harlequinade.” In 1965, George Balanchine fashioned his own version of Petipa’s production for New York City Ballet. In his staging, Balanchine, who danced in the original ballet as a student of the Imperial Ballet School, didn’t attempt to replicate Petipa’s steps: “Who, in fact, remembers them?” he quipped. Instead, he created his own choreography in the “spirit” of Petipa, honoring the witty, carnival-like atmosphere and clarity of storytelling of the original.

A dedicated ballet scholar, Alexei Ratmansky, however, is on his own quest—to go far and wide to discover and rediscover the Petipa artistic trove in its uncluttered truth and authenticity. He wanted his new production to look as close as possible to the original Petipa work—not only in spirit but also in every little detail of the choreography. To achieve this, he spent countless hours in the library at Harvard University, which houses an extensive collection of Mariinsky archival records, deciphering and making sense of Petipa’s original steps, which were written down by using the Stepanov dance notation—a unique system of recording the choreography invented by Vladimir Stepanov, a teacher at the Imperial Ballet School. In his work, Ratmansky was assisted by his wife Tatiana, his frequent collaborator. (In 2015, they undertook a similar library exercise to restore to its new-born condition Petipa’s crown achievement, “The Sleeping Beauty,” also for American Ballet Theatre. This production I value and admire greatly.)

Yet the new “Harlequinade” left me with mixed feelings. On the one hand, I thoroughly enjoyed this production’s impressive décor. The lavishly-designed costumes— and there are more than 250 of them in this ballet, plus a multitude of elaborate hats, wigs, and other fashion-related paraphernalia—are simply gorgeous. Perdziola did a terrific job, outfitting this “Harlequinade” with taste and style, his designs inspired by the original costumes and decorations by Orest Allegri and Ivan Vsevolozhsky. There is also Petipa’s choreography as resuscitated by the Ratmanskys. And it’s charming and cheerful, with two romantic pas de deux for Harlequin (the indomitable James Whiteside) and Columbine (danced with a perfect blend of elegance and wit by Isabella Boylston), an array of lovely solos for the main personages, including a perky Pierrette (the mercurial Gillian Murphy), an allegorical vision scene that offers a chance for the female corps de ballet to shine, plus a delightful divertissement featuring a small army of children—the students of the company-affiliated Jacqueline Kennedy Onassis School.

On the other hand, as I was watching the performance, I couldn’t help wondering if this particular Petipa ballet deserved such a royal treatment. The truth is “Harlequinade”—authentic or not—is not a top-drawer Petipa. There is no substantial character development: the cartoonish main characters are too slightly drawn, their love story lacking emotional poignancy and dramatic depth; and with all the hustle-and-bustle happening onstage, there is hardly a moment of truly inspired choreography. The ballet’s music is appropriately bubbly and spirited, but never rousing and memorable.

In Balanchine’s version, with his newly-devised steps and roles, this ballet acquired an unexpected emotional dimension and it featured two great dancing parts, created for Patricia McBride and Edward Villella, who is mentioned in the program notes with gratitude for his “invaluable assistance during “Harlequinade” rehearsal period. Yet in this new Ratmansky-after-Petipa’s adaptation, “Harlequinade” looked and felt like a relic of the past, even if meticulously and beautifully restored.

Next
Dancing with Distinction