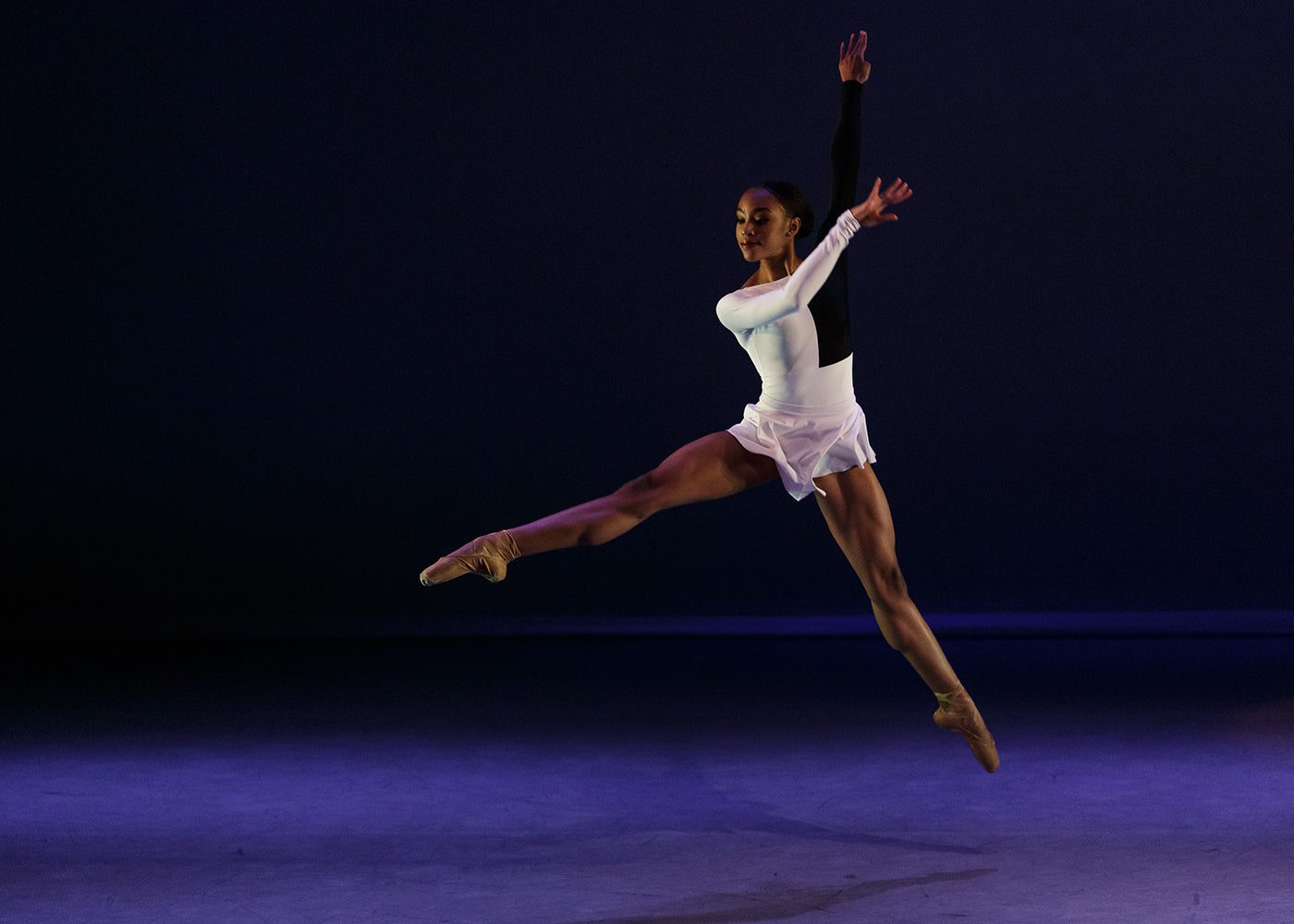 The American Ballet Theatre Studio Company aired performances of new works and excerpted classics over two nights this week, for free on YouTube. Actually, the shows were billed as two halves of one Winter Festival performance, separated by a 23-hour intermission. I appreciated the digestibility of this scenario, for watching ballet online is not the same as watching it in person—it is much harder to focus on a computer screen than a massive stage.

This “show” was filmed in the fall of 2020, after a seven-month Covid-19 hiatus. It featured two world premieres: one of which was choreographed right before the company’s shutdown, the other was created entirely during the fall bubble. Both evenings began with the same montage of the preparation involved in the making of the performance—including the troupe’s mandatory quarantine period at the Goodspeed Musicals campus in CT and the five-week rehearsal period and filming at the Kaatsbaan Cultural Park in upstate NY. It was impressive that the 15 talented young dancers of the Studio Company were able to perform at such a high level given all the restrictions and time off.

Case in point: the opening, virtuoso solo “Gopak,” danced by Elwince Magbitang. He easily dashed off the barrel turns, flashy leaps, and multiple pirouettes of this folksy variation. But this kind of bravura piece begs for the oohing and aahing of a live audience. I missed the collective intake of breath before every trick in a crowd, and the subsequent smirks and heightened showmanship that emerge when a dancer knows he is killing it. Magbitang had no feedback, no one to charm with his feats. I think it was because of this that sometimes he didn’t quite sit long enough in the poses, didn’t always wait for the note to hammer home a brilliant landing. It read like an Olympic time trial rather than a dance, or tough class exercises in a peasant blouse and boots. I felt similarly about the “Corsaire” excerpts on the following evening. Again, the cast was technically flawless. Elisabeth Beyer, Magbitang, Jake Roxander, and Kotomi Yamada dispatched the hard stuff handily. But it felt detached.

Likewise, the second evening commenced with a ballet class compilation by the Studio Company’s Artistic Director, Sascha Radetsky. It was called, aptly, “Class Concert.” It was cute, but I wasn’t excited about watching the troupe do frappés at the barre or straightforward petit allegro drills to tinny, even, piano renditions of Tchaikovsky’s “Swan Lake” and other famous ballet scores. It’s fine to be that dry in the morning when dancers are still waking up, sipping coffees stashed under barres in between combinations. But if you have just a few hours to dazzle people in their homes—and maybe accrue some donations—it’s best to stick with meatier fare. I found the show was at its best when it was more artistically ambitious. Luckily, with a slew of premieres and morsels from masters Alexei Ratmansky and Antony Tudor, there was plenty elsewhere to chew on.

One nice development was the world premiere of Lauren Lovette’s “La Follia Variations,” which closed Act I. This was the best piece yet by Lovette, a New York City Ballet principal dancer as well as a choreographer. With the dancers minimally costumed—a little black belt on the ladies’ white practice tutus was the lone flourish—the focus was on the steps. This simplicity served Lovette well. She used Francesco Gemignani’s danceable score of the same name (which lives in the rep of her home company as the basis for Lynn Taylor-Corbett’s “Chiaroscuro”) inventively. In “La Follia” she demonstrated a new fluency in transitions and small group work. I loved an interlude with Cy Doherty and three ladies that seemed like a riff on Balanchine’s “Apollo.” Also neat was when Aleisha Walker formed the point of a long triangle and then pulled her chain-linked colleagues back through to invert it. Olivia Tweedy was great in a liberated solo passage.

Lovette often demanded a lot of her dancers. Some moves were difficult, and they appeared so. For example, an overhead press lift that descended onto pointe just barely worked, and Andrew Robare thrillingly executed a slow, jerky, grand rond de jambe to penché while staying on relevé. I was reminded that Ratmansky recently choreographed a solo on Lovette, perhaps this was his influence. He doesn’t shy away from challenging his dancers to try and possibly fail in performance. It adds to the suspense.

Closing Act II was the other world premiere, Hope Boykin’s “For What Is It All Worth?” It began well, with a soulful, fluid solo for Robare to piano compositions by Billy Laurence with spoken word by Boykin herself. After that it was uneven. She used two covers of Stephen Stills’s Vietnam era rock song “For What it’s Worth” (by Voices of East Harlem and Bill Porter). It was hard for me to square this antiestablishment anthem with the polished, eager Studio Company dancers, who earlier in the evening were shown diligently doing barre every day on the porches of their gingerbread cottages at the Goodspeed complex. The costuming didn’t help. Denim paired with a white t-shirt is a classic look, but it can signify different things depending on its cut and texture. The jeggings and cropped jackets the dancers wore looked more like a Gap ad than James Dean in Rebel Without a Cause. Robare and Tweedy fared the best, but I kept imagining Boykin—a powerful dancer with the Alvin Ailey American Dance Theater for two decades—dancing the piece in a faded, broken-in pair of real jeans. As it was, I had to settle for her inspiring introduction speech in which she said that even during Covid, the choreographic process had provided her with heart-filling, true, and hopeful moments.

Also well-spoken were Isabella Boylston and Calvin Royal III, ABT principals and Studio Company alums who served as hosts—one per evening. Both seemed wholly at ease as they reeled off stats: 80% of the current American Ballet Theater members were once in the Studio Company, including 7 soloists and 12 principals. The Studio Company is an interesting concept, it serves as a training ground for promising dancers aged 17-21. They are past their student days, but they aren’t yet officially apprenticed to the troupe (nor will they all be). My favorite piece was the one that met them in that space and harnessed their budding artistry and enthusiasm: Amy Hall Garner’s “Escapades,” from 2019.

In introduction, Garner said that “Escapades” was, “an homage to the spirit and passion of youth.” The driving, optimistic score by Ezio Bosso and Guy Sigsworth fit the dancers perfectly—as did the sleek black and white costumes. I loved the women’s white long-sleeved dresses with black color-blocking. The choreography was full of springy sissones, flexed foot accents, and jittery hands. Aleisha Walker’s expansive solo was a highlight, but the entire cast—Tristan Brosnan, Finnian Carmeci, Teresa D’Ortone, Tillie Glatz, Magbitang, Robare, Yoon Jung Seo, and Walker—was wonderful. Their buzzing energy was palpable even through my small screen.

Next
Christopher Wheeldon: Making Dances in a Pandemic