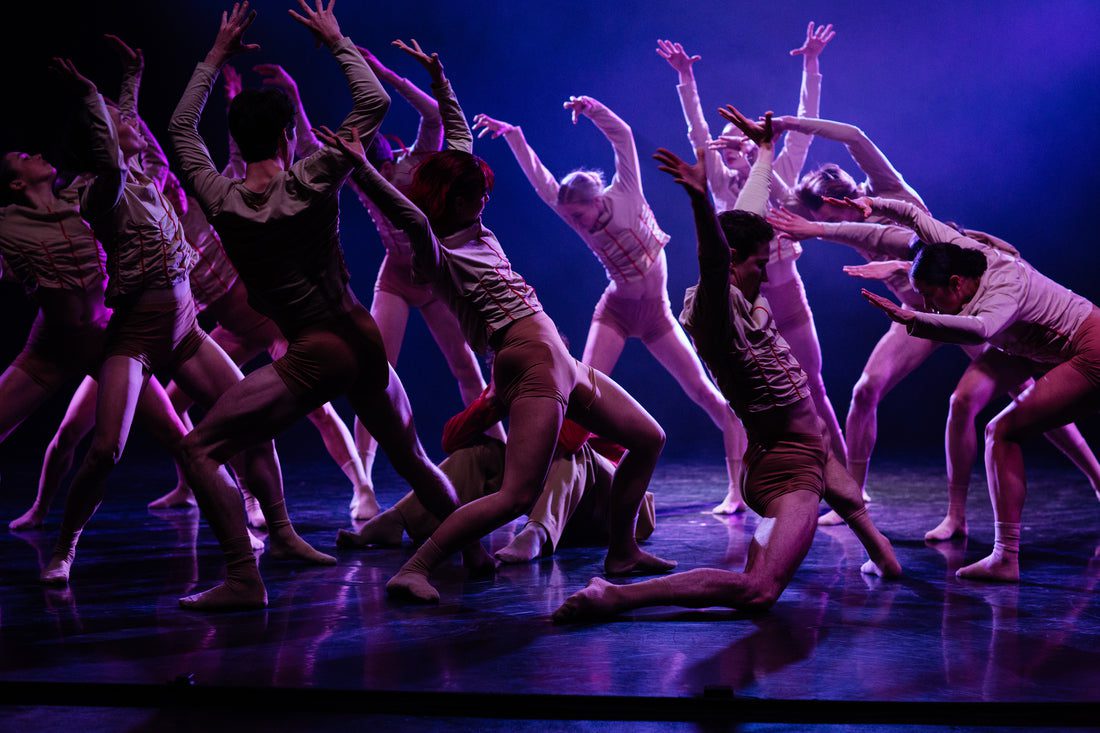 The Australian Ballet's “Bodytorque” returns to the stage

Under a sturgeon supermoon, I head to Transit Dance in Brunswick, to see the Australian Ballet’s annual Bodytorque program of new contemporary works. Were I in a different hemisphere, such a bright night would symbolise the start of the harvest season, which, I guess, is true of the Bodytorque choreographic showcase: a gathering of crops, this year from Jill Ogai, Mason Lovegrove, Timothy Coleman, Serena Graham, Benjamin Garrett, and winner of the 2020 Emerging Female Classical Choreographer, Xanthe Geeves.

After two years of Bodytorque inhabiting an egalitarian digital realm, we’re shifting someplace else now. Benedicte Bemet is no longer sat alone in the Great Hall of the National Gallery of Victoria, but alone on the stage, albeit momentarily. Bemet, with an air of casual restlessness meets inward reflection, is waiting as the audience finds their seats. She is soon joined by Karen Nanasca, Luke Marchant, Aya Watanabe, et al. and they each take turns peeling off from the group. Seats found. Lights down. Quiet falls. Begin, “in time.” Whose time? Yours, of course. When you’re ready.

From the internal world of 2020’s “Forma,” this time, for Bodytorque 2022, choreographer Jill Ogai is looking at the internal rhythms of six dancers who “have no relationship to the dystopian and expansive lines of Rosa Clifford’s composition, ‘Lines of a Consistent Hue.’”1 But this, like all things, is not where we stay. The next landscape is different again. It wriggles and fizzes. And with your hands you can draw the up and down of an elevator shifting floors, shifting states. With tiny fists, and arms in high and close, the appearance of bubbles, slowly coming to the surface. “Here,” explains Ogai, “the dancers are right on the music, the two bouncing together as equals.”

A glorious sense of “bouncing together as equals” is also within Mason Lovegrove’s “Angel//Alien,” and they are held together, the angel and the alien, by a uniquely beautiful score by Tomas Parrish. You and me. One and the same. The “I who’s also you” of poetry.2 Look again. “New Ghosts”, previous, and angels and aliens, now, though from another sphere, the “fluttering, falling, growing, contracting, thrashing, reaching, crying, laughing”3 conversation is relatable, human. Brett Chynoweth, Christopher Rodgers-Wilson, Jarryd Madden, Imogen Chapman, Rina Nemoto, Yuumi Yamada, and Callum Linnane are the rapid response on the stage. Their bodies, the words. In particular, Chynoweth and Rodgers-Wilson’s intimate, hold-your-breath pas de deux, where to each other they are the hollow of a bowl of water. Followed by Madden and Chapman’s green-stick tree limb pas de deux, unfurling in hope. Such tender, entwined movements, illuminated by lighting design by Graham Silver.

Xanthe Geeves’s “Pura Vida,” Serena Graham’s “In Ex Celsius,” and Benjamin Garrett’s “Kids These Days.” Their combined equation reads: Pure joy + Transference of emotional states + Freedom to be who you truly are = Energy. Found in living a full life, peppered by Boccherini performed live. Found in exploring Einstein’s observation that though energy readily changes states, without external input, the amount remains the same. Found beneath the ubiquitous grey marle hoodie. Lit up, one by one, like museum exhibits of Generation Z, in “Kids These Days,” a crash course for those outside: this is how it feels to burn bright now. Same as ever, but can you remember?

Just as you can play with the rules of syntax to change the meaning of words in a sentence, the same is true of dance. With steps as punctuation, clarify meaning with a tap of the foot for a full stop. Slide a comma up next to a word or a body, and leave no space for it on the other side to invite play, denote a pattern change, invite reflection: what is the meaning here? In Timothy Coleman’s “One Person Watching,” with music by May Lyon, word play is not just within the synopsis after André Breton, but within movements that conceal and reveal. Movements that are in the process of falling that then ascend, and rise up. Linnane makes poetic word-image combinations, as he inhabits the role of one person watching. One person watching a couple through the window, all the while shadowed by a cast of 14 other possible parts of themselves. Nerve endings, wincing. Panic and fear, within. “Presence and… absence in hopeless fusion,” as Breton wrote, “always for the first time.”

Six brave, electromotive works I can experience countless ways. Always, as if, for the first time.