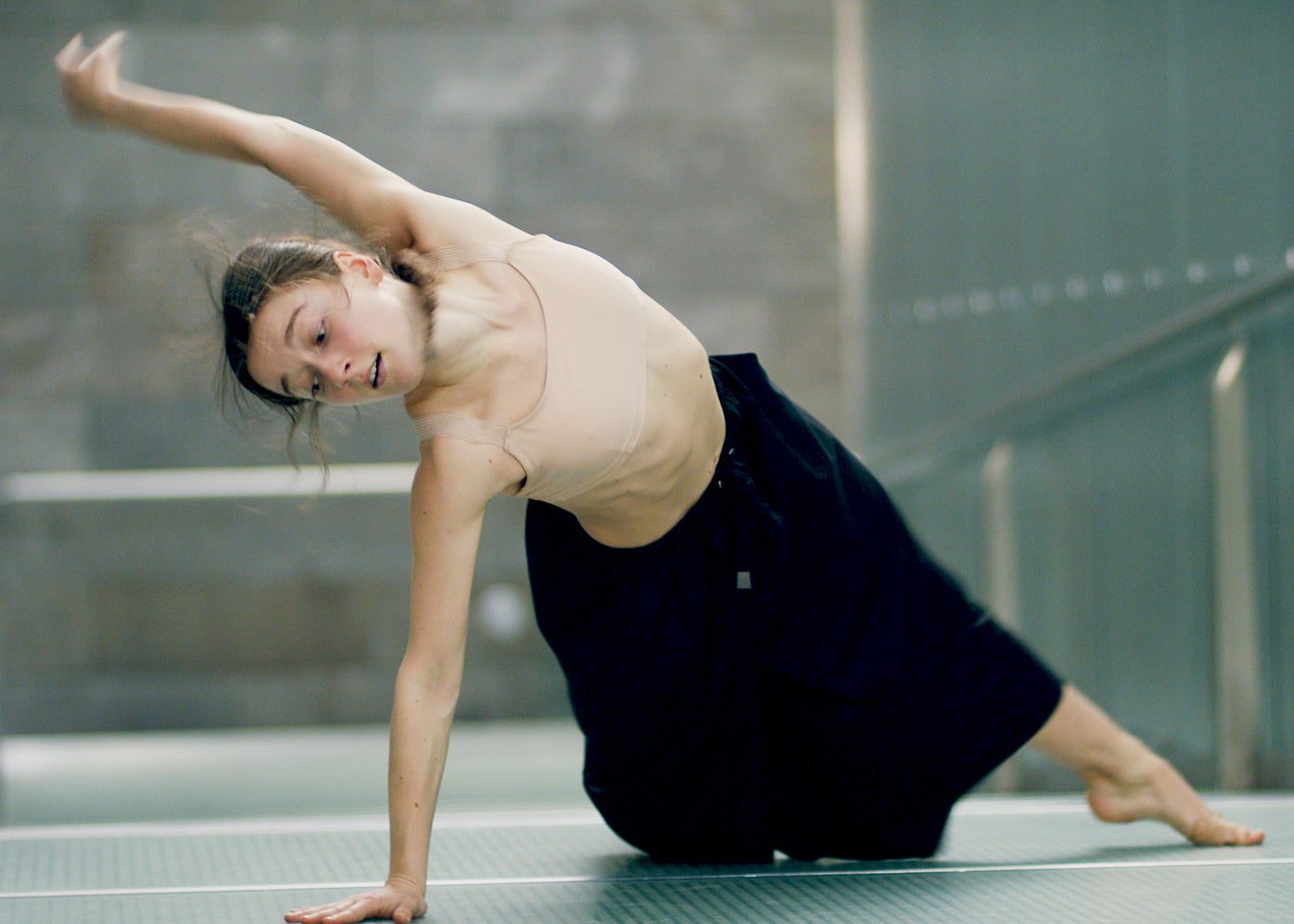 It begins in a place I know well. In the Great Hall of the National Gallery of Victoria. Benedicte Bemet, who was promoted to coryphée in 2013, to soloist in 2016, to senior artist in 2018, and to principal artist in 2019 with The Australian Ballet, is seated at the far end of the hall. Beneath the prismatic revelation of Leonard French’s Great Hall ceiling (1963–67), Bemet is alone.

The Great Hall has always felt like an invitation: lie down, look up, feel the bright coloured light, see a sun, and turtles too. But this is not the Great Hall as experienced by someone visiting the gallery, though it does perhaps call upon the familiarity that comes with a common space, it is a stage set for François-Eloi Lavignac’s “Capriccio.”

“Capriccio” is the first of five works presented as part of Bodytorque, which this year, like many things created in varying states of isolation, quarantine, and lockdown, is digital. Bodytorque.Digital is a light on the “endurance of creativity,” which, also like the Great Hall, is an invitation to “watch the next wave of ballet and the future of movement.”1 Works by Mason Lovegrove (Work Two) with dancers Serena Graham and Joseph Romancewicz; Jill Ogai (Work Three) performing to Telemann and Bach; Tim Coleman (Work Four) featuring a new composition by Georgia Scott; and Amelia Drummond (Work Five) with dancers Belle Urwin and Adam Elmes will follow. The dates for their screen reveal, not yet announced. For that one needs to calendar-sink and await a hopeful ping-ping.

Isolation colours “Capriccio,” whether always intended or not. It is there in the actions of Bemet wringing her hands clean, and tracing circles around her face. It is there in the series of loud bangs of something heavy being closed or dropped, to which I visualise the gallery, as if a person, boarding up its shutters. I am watching this from stage 4 lockdown in Melbourne. It is there in the supplied back story from Lavignac: “Benedicte and I started rehearsing via our computer screens using Microsoft Teams. For two months we called each other two to three times a week to rehearse and find the new version of this project we had started three years ago. We both enjoyed revisiting this content, giving it new meaning and also creating new content to represent us three years after . . . Benedicte and I had such fun with Brett Ludeman, our cinematographer, running around the gallery on our own (in a socially distanced manner of course), playing music, dancing, laughing, working. What a privilege this whole process has been. This project turned my isolation into something of beauty and purpose.”

In this form, to J S Bach’s “Lament” from Cappricio in B Flat, the work is also about friendship and trust. “Capriccio” is built upon a project between Lavignac and Bemet, which began in 2017 when Bemet was unable to dance as she recovered from injury. As Lavignac describes, “she sat on a chair and all I wanted was to remind her that she was still a dancer.” In every twitch, to me, Bemet appears to be calling on her own experience of pain and the slow path of recovery and adjustment, and the shared experience of us all in this time of restricted movement and access. Drawing upon the specific and the universal. Drawing upon what sustains us. As she moves through a space that is no longer open to the public, along corridors near to the hall, and from the balcony and alcoves that look down onto the hall, this space is familiar, and circular, as the name hints. We reach the beginning again: or do we?

Bemet is red and fast as she moves through Rei Kawakubo of Comme des Garçons’ deconstructed garments in the exhibition, Collecting Comme. It is only fitting that “reframed ideas of beauty, and [a] proposed . . . new relationship between body and dress”2 provide the background to inform the foreground here. The exhibition can be explored as a 3D space online, beginning with that familiar dolls house view, but I miss Bemet’s presence to animate it. It is in this moment that I see Bemet’s sweep-rise, beat-flutter movements like that of a swift in a nest. “As soon as they tip themselves free of the nest hole, they start flying, and they will not stop flying”3 for years to come.

In Helen Macdonald’s Vesper Flights she describes the ascent of swifts, those “miniature black stars illuminated by the reflected light of the moon,” as being “summoned by a call or a bell, [as] they fall silent and rise higher and higher until they disappear from view.”

In a sense, dancers and choreographers perform their own vesper flights which allow them to crest “the top of what is called the convective boundary layer . . . By flying to these heights, swifts cannot only see the distant clouds of oncoming frontal systems on the twilit horizon, but they can also use the wind itself to assess the possible future courses of these systems. What they are doing is forecasting the weather . . . At this panoptic height, they can see the scattered patterns of the stars overhead, and at the same time they can calibrate their magnetic compasses, getting their bearings according to the light-polarization patterns that are strongest and clearest in twilit skies. Stars, wind, polarized light, magnetic cues, the distant stacks of clouds a hundred miles out, clear cold air, and below them the hush of a world tilting toward sleep or waking toward dawn. What they are doing is flying so high that they can work out exactly where they are, to know what they should do next.”4 Swifts orienting themselves. Artists recalibrating themselves. Gathering information and exchanging it freely. Trusting the forecast, the process of collaboration; “trusting the human instinct and finding the room to feel,”5 tucked safe in the knowledge that everything, from swift soft beak to strong feet, is connected.

Like the beautiful images of the vesper flights of swifts appearing as smatterings upon a radar PPI display, “radar bird watching is, of course, no replacement for the normal methods of visual observing. It is a powerful new tool which must be used in association with visual watchers, but these few illustrations will serve to show that a great wealth of new information on bird movements is likely to result from its application.”6 The same could be said of viewing dance as a film uploaded to a company’s YouTube channel. No replacement, but a great wealth, and utterly beautiful.

“Capriccio,” at the intersection of things—open and closed, private and public, local and universal, in nature and artificial, perhaps even grounded and inflight—and at a time paused, my hope is that when “we emerge from Covid-19, a crisis curable only by science, surely more of us than ever will want to protect this one and only environment that sustains us.”7

Next
On the Front Line