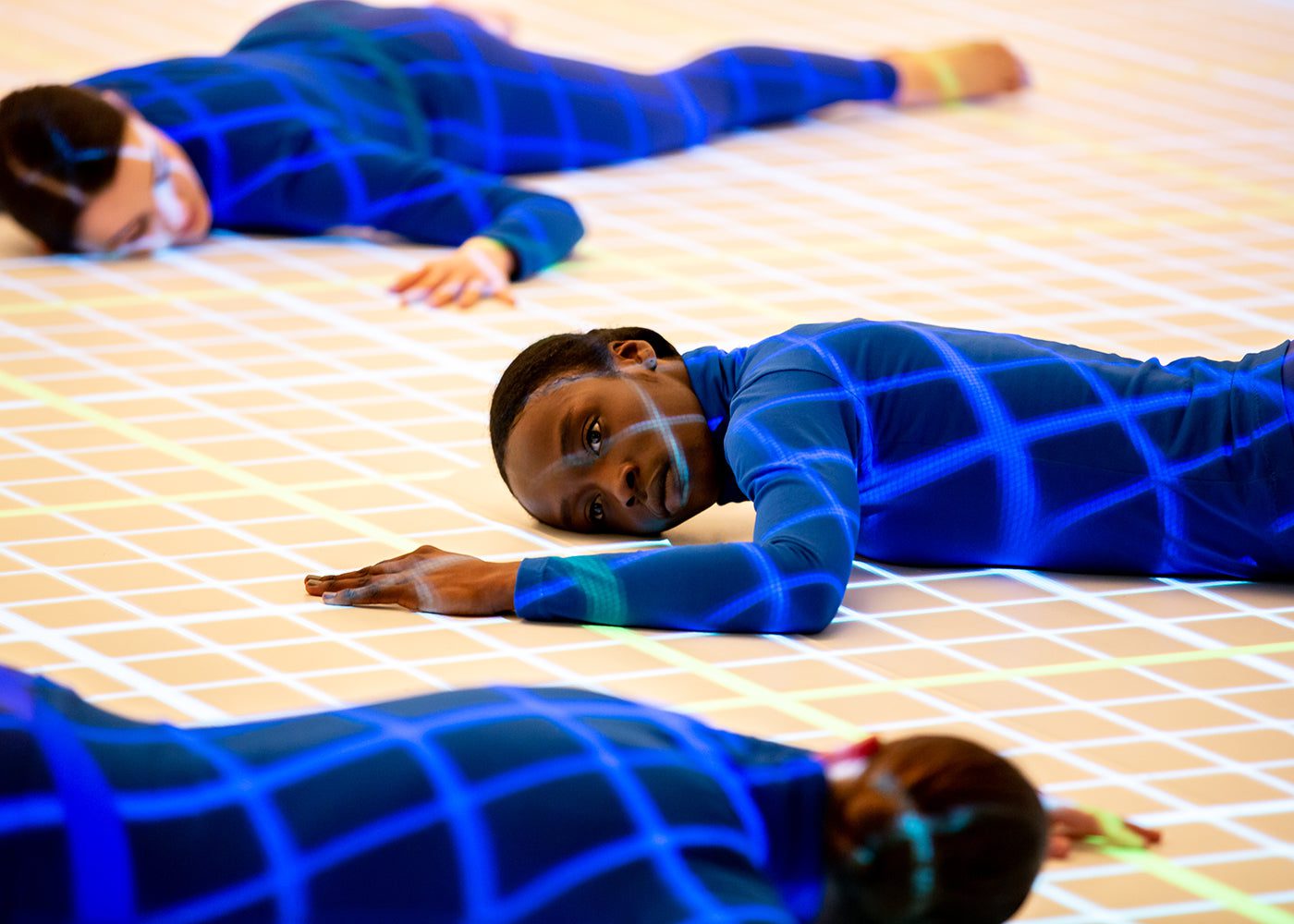 There’s about 14 different choreographies in this 13-minute long dance film, Dive. Some of them are bonkers. Some are sad. One has an alpaca.

Dive is the brainchild of the electric Scottish Ballet resident choreographer Sophie Laplane, once again alchemising a tautly choreographed film for the company, and director James Bonas of 2019’s The Crucible fame. It’s released alongside Soloist Nicholas Shoesmith’s Odyssey, both of which are produced in association with Forest of Black.

In Dive, we open in a completely white room. One lone dancer (Barnaby Rook Bishop), painted and garbed also in white, gazes sadly at the ground he lays on. He moves slowly and just so to Schubert, as though slightly stunned. A melancholy, Pierrot the Clown distress pervades the space.

Until. A blue box suddenly appears in the left-hand corner, heavy music slices across Schubert, and a figure in blue jumps up and down, coffee cup in hand. We career back to our lonesome figure, who now finds himself occupying a surreal comedy rather than an introspective solo. He is soon joined by two other immaculately synchronised dancers, and the film continues down its merrily erratic path.

These sudden shifts in visuals, music, tone and bodies is the dictating rhythm of Dive. We lose our focal character as more of the company come in, sometimes in duets or in larger group formations. The costumes encompass dusty, skin-tight bindings and mighty mushroom shaped headpieces.

Dive works best when you forget you are watching people in a room dancing. The superb editing flashes between blocky white and blue backgrounds, wobbling a knowable space. Aerial shots from above make the boundaries of the room get lost. Sometimes the dancers play at Tetris, becoming horizontal rectangles that judder back and forth into spaces. Or their contortions across the floor are played back in reverse.

There’s a fair few yoga poses, including some impressively held side-crows—a year of no access to a big studio, perhaps. Elevator music makes an appearance over an exquisite duet between Sophie Martin and an unknown dancer in a blue morph suit. Laplane hits a groove in one particular pulsating scene where the company moves with a pared-back robotic cool, while Rook Bishop stalks through them in ultraviolet blue shades and high heels. I feel he might try to sell me high-end vodka.

Is it all in someone’s head? Whose head? Is it a fantasy, an asylum? Are they happy? I’ve no idea what it’s about, and maybe sometimes the film doesn’t either. But it’s brashly enjoyable and another brilliant engagement with our visually over-stimulating digital world from the in-house digital team.

Odyssey by Choreographer Nicholas Shoesmith and Director Ciaran Lyons is a comparatively straightforward affair. Set in a game-like landscape, the ability to inhabit new virtual worlds comes tempered with both the fear and desire of the unknown.

With procedural efficiency, dancer Christopher Harrison exits from a lift and enters a rigged lit square, swapping in with another dancer before donning a VR headset. The film moves between shots of what he sees in his virtual reality and what he is doing in the ‘real’ space. Harrison seems made for the close-up, his eyes opaquely staring down the creatures that cross his path.

The three worlds (named in the credits as Saturn, Mars and Venus) have a touch of the ‘exotic’ in them. Long limbed creatures slide across on a sandy plane; two-headed bodies, slick in their all-black suits, threaten to engulf Harrison. He moves with hesitation until the third world, where elevated women up high on their pointe shoes gravitate around another (Constance Devernay) who seems to be their leader. She, too, is inhabiting both the real and virtual worlds. They touch and move together before Harrison reaches out a hand: she taps Harrison ‘out’ and remains in her own created world as he walks away.

There’s not much chance to settle into each world before we leave it for the next, but there’s a potential depth in the idea awaiting further probing. The second world in particular has a kick to it, the camera catching up with the movement and weaving between the dancers’ impressive attitude turns. Shoesmith’s choreography is interestingly contemporary, the dancers twisting into deep, satisfying Cunningham lunges with beautifully curved spines, or cartwheeling through fluid floorwork.

Though each film is unique to its creators, there’s a recognisable Scottish Ballet professionalism in these latest digital films. Slick, well-oiled, fun.