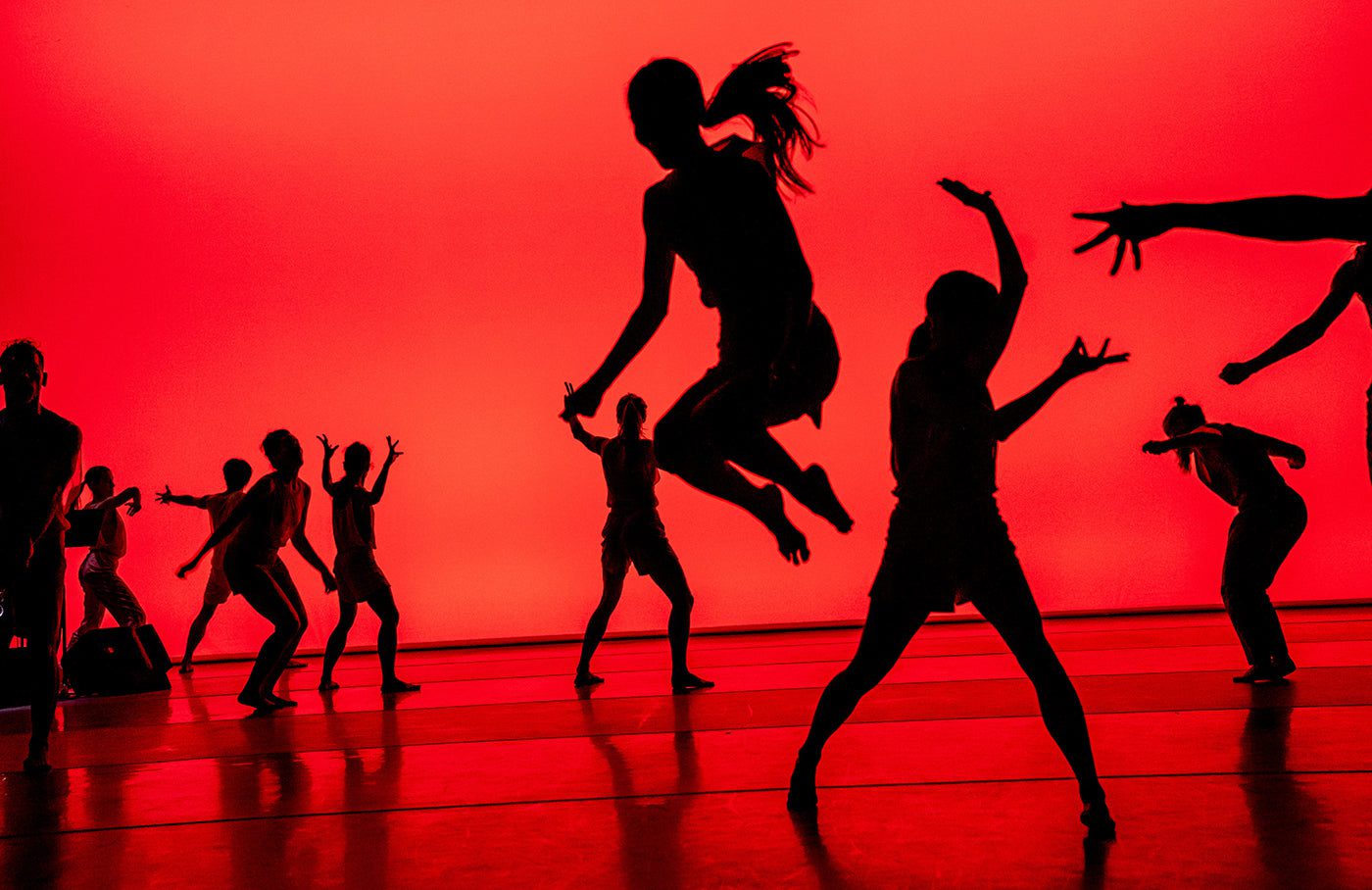 The dancers of Sasha Waltz & Guests and the musicians of Bang on a Can All-Stars walked onstage in silence, their forms making dark silhouettes against a saturated pink backdrop. For a few minutes they milled about, reconfiguring into different pairs, groups, and lines before the musicians eventually settled themselves at their instruments and the dancers found their marks. A bright chime sound, coming from percussionist David Cossin, set the the driving beat that propels Terry Riley’s iconic minimalist score “In C” forward. As more lights came up and the dancers warmed up with rhythmic shoulder rolls and head turns, dawn seemed to be breaking.

So began Sasha Waltz’s “In C,” a highly responsive dance choreographed to Riley’s highly interpretive score of the same name. Written in 1964, the open score can be performed by any number of musicians and instruments; adding to the variables, the musicians are also free to make choices about how long to play each of the 53 melodic fragments, or cells, and even whether to repeat it. Riley has cited John Cage and jazz pioneers like John Coltrane and Charles Mingus as influences, along with his training in Indian classical music. Bringing her interdisciplinary practice—which has ranged from immersive dance installations to reimagined story ballets and operas—to what is often hailed as the beginning of minimalist music, Waltz and the 14 dancers soaked up a sort of pure movement power straight from the source.

Waltz’s system also offered a discrete movement phrase for each building block of the score. In an early phrase, a turn with windmill arms swept up new dancers every time it was performed, and in this way it accumulated bodies and energy. Each shift by a musician triggered a dancer to begin a new move or set of moves in a style that was mostly formal, often cutting sharp lines and clear gestures, though at other times swaying and rippling out in undulations. Soon, other dancers folded in based on an internal set of rules regarding time and space. New patterns emerged as the different phrases were simultaneously stacked upon one another. This created chance as to the timing of when certain dance phrases might appear, overlap, and end, and accounted for endless variations on how the patterns swept across the stage and when or if, dancers might connect.

In such a highly structured form of improvisation, sculptural duets were born of proximity. Through all the repetition the audience was given the chance to see different versions of the same gesture: a curved arm slicing through the air when performed solo also held the possibilities of an embrace when the stars aligned. And align they did. A drop down to all fours eventually morphed into a moment of interplay between pairs of dancers, leapfrogging in a canon over one another. Seeing it appear in solos later came with a different feeling, a sensation of what was missed.

In terms of the execution of the dance steps, the dancers were completely in sync—whether in unison or canon—with a very specific musicality. No matter when it was performed, a kneeling kick would jut out in one sharp count and return down to the floor in two soft counts. This clarity was also its own kind of wonder—groups that formed so organically danced with a complete synchronicity that is rare to encounter in any kind of dance, let alone one that abounds with such spontaneity and is in direct conversation with equally spontaneous musicians, a few of them cycling through different instruments. Even the colorful lighting by Olaf Danilsen seemed to be triggered by shifts that were happening in real time, adding another layer of joy and life.

The dance was surprisingly multi-dimensional for a work set on a proscenium stage. The dancers explored diagonals and corners, coalesced up close near the musicians grouped on stage right, and spilled off the sides of the stage, looking especially expansive without wings. Those most downstage often faced upstage, all the better to see one another’s near imperceptible shifts. So consumed with their roles in this great interconnected and churning machine, the dancers were utterly consuming. Even rare moments of stillness—as when a woman in red seemed to suspend time, one hand grasping her foot, the other holding her chin—were surrounded by the same spirit of never-endingness, held aloft by the relentless swirl of bodies in motion.

This awareness of an order—however flexible and adaptable—holding up a great vastness, underpinned both the music and the moves. More pointed was the resulting harmony concerning the interplay of the individual amidst humanity. In Waltz’s words, reflecting upon the creation process against the backdrop of the pandemic and performances happening as the war rages in Ukraine:

“We constantly had to ask ourselves: How can we keep our personal liberty without harming society? ‘In C’ gives one example of how this can work: It is a piece about being part of a group as an individual rather than being an individual within a group.”

The answer to Waltz’s question was embodied in the deep listening and hyper-awareness “In C” required, of both the artists and the audience. You can’t do that work without being present, and such presence drops you into a state of flow. And so an indefinite duration passed, all of us absorbed in the hopeful and collective act of creating anew.

Next
A Season to Celebrate