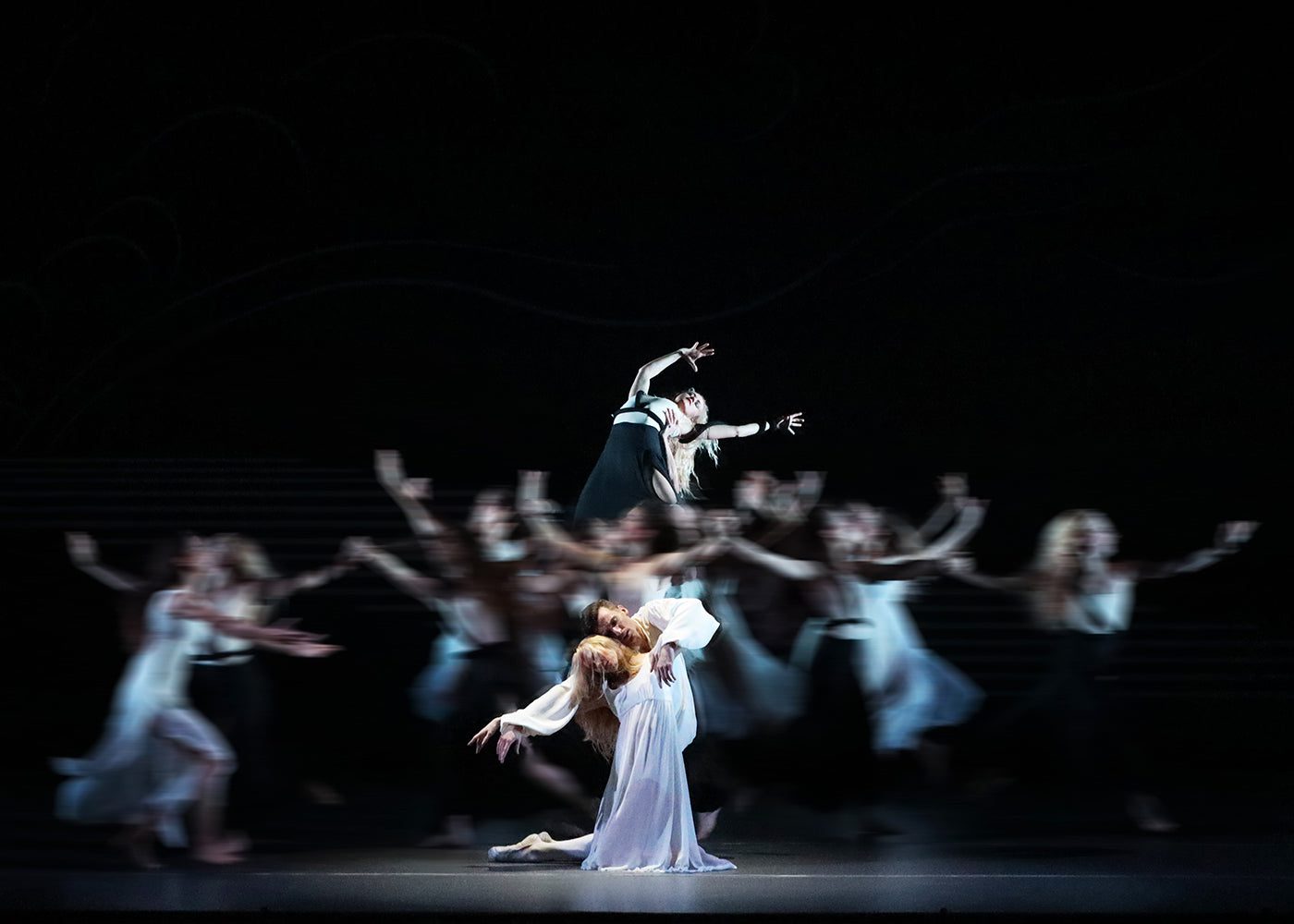 Everyone knows that Sarasota Ballet is Frederick Ashton’s unlikely home-away-from-home, on the Gulf Coast of Florida. Or not so unlikely, given that it is directed by Iain Webb and his wife Margaret Barbieri, both of whom danced for the Royal Ballet in London. Barbieri, in particular, worked directly with Ashton, as well as with Kenneth MacMillan, whose ballets are also performed here. The company’s second repertory program of the 2022-2023 comprised works by both, including two early ballets seldom seen anywhere. Each is a curiosity.

The two are “Danses Concertantes,” from 1955, made by MacMillan when he was just twenty-five, and Ashton’s “Dante Sonata,” an uncharacteristically modern-dance-like composition made in 1940, at the dawn of the Second World War. These were both company premieres, the first brought to the company by Grant Coyle (principal dance notator to the Royal Ballet) and the latter by Patricia Tierney (dance notator at Birmingham Royal Ballet). The program closed with the airy, virtuosic “Rhapsody,” originally conceived as a gift for the Queen Mum’s eightieth birthday in 1980, and, equally importantly, as a setting for the dancing of one Mikhail Baryshnikov.

It’s not easy to step into Baryshnikov’s shoes, but Yuki Nonaka, a young dancer who joined the company in 2019, did a more than respectable job in a role that includes every step in the book, from 360-degree revoltades in which the “free” leg whips all the way around in the air, to a neverending gauntlet of beaten jumps, little jumps, big jumps, and steps that go this way, only to quickly turn in the other direction. Nonaka didn’t dazzle, exactly, and not every fifth position was as tight as the strictest dance-master might aspire to, but he made it through with just enough flair, and could probably do even better given a few more opportunities to dance it.

His partner was the Argentine dancer Macarena Gimenez, who recently joined the company (with her husband Maximiliano Iglesias) after leaving her principal post at the ballet company of the Teatro Colón in Buenos Aires. Gimenez has the gift of musicality and ease. She makes Ashton’s extremely quick footwork, usually combined with lots of bending in the upper body and lush epaulement, look absolutely natural and right. She gave the impression of basking in the richness of the music, her upper body and port de bras filled with the breath of Rachmaninov’s Rhapsody on a Theme of Paganini. The grandiloquent score was played with panache by the pianist Cameron Grant and the musicians of the Sarasota Orchestra under the baton of the experienced ballet conductor Barry Wordsworth. With its neoclassical set—a colonnade and set of stairs—and sunny lighting, is a ballet that emanates an air of contentment and order. The corps de ballet of twelve is like moving architecture.

Gimenez is the kind of dancer who instantly makes you feel that you are in good hands, and who fills the stage with the amplitude of her movement, without resorting to majestic airs. She is also, obviously, used to projecting into large theaters, not only with her body but with her face; a slight toning-down of her smile might be appropriate for the Sarasota Opera House, where the company performed this weekend. (It is a bit of a tight fit for the larger ballets.) In general, as I’ve mentioned before, the company tends to smile too much.

“Rhapsody” was the crowd-pleasing closer on a program of oddities. “Danses Concertantes,” set to Stravinsky’s score of the same name, inevitably invites comparisons with George Balanchine’s work of the same name, originally made in 1942 and reimagined in 1972. There is a similarity in the playful, commedia dell’arte tone of both ballets, a response to the (ironic) friskiness of the score. Both Balanchine and MacMillan have a tendency to break the cast into groups of three.

But Balanchine’s ballet is more orderly, more neatly subdivided, with a big opening and an equally celebratory closing and a series of four trios, each featuring a different thematic step, in the middle. MacMillan, instead, has people constantly coming and going, and includes a pas de deux (danced here by the impressive Danielle Brown and Ricardo Graziano) and a Pierrot-like solo (Luke Schaufuss). The solo, full of humpty dumpty rises and falls, wiggles, and syncopated strumming for the arms, is especially interesting. Bot the pas de deux and the group sections use doll-like movements, wiggling wrists, and turns and tilts of the head (accentuated by Nicholas Georgiadis’s head-pieces) to give the work a vaudevillian, clown-like feeling. I was particularly taken with a little soft-shoe solo for one of the women. It is certainly an odd piece for MacMillan, who would later go in for hyper-dramatic ballets with much emphasis on complex and heavy-handed partnering.

The sturm-und-drang of Ashton’s “Dante Sonata” is a reflection of the time in which it was created, but also of Franz Liszt’s piece of the same name, expanded for the ballet into an orchestral piece, by Constant Lambert. The swooping piano part, with all its Lisztian scales and turbulent chords, was played here by Vedrana Subotic.

The ballet also hints at Ashton’s fascination with Isadora Duncan, whom he saw dance as a young man, and who would later inspire his “Five Brahms Waltzes in the Manner of Isadora Duncan.” (I can’t help seeing some Martha Graham, particularly her response to the Spanish Civil War, “Chronicle,” in it as well.) The women wear their hair down and dance barefoot, in flowing costumes by Sophie Fedorovitch. The cast is divided into two groups: the seraphic Children of Light and the fury-like Children of Darkness. The atmosphere is Dantesque, with a penchant for tempestuous encounters, grasping arms, and piles of bodies thrashing on the ground.

The seraphim, too, have their moments of rage, as when Marijana Dominis beats her arms furiously as she swirls around and around the stage. A married couple (she’s still wearing her wedding veil) emerges from the wings, only for the woman to crumple to the ground, dead. A man (Richard House, tall and statuesque) is crucified and carried off by a cortege. Subtle, it’s not, and at times the extreme drama verges on caricature. But it’s fascinating to see a work that defies all expectations about Ashton—usually so decorous—and that might have been lost if it had not been revived in 2000 at the Birmingham Royal Ballet after disappearing from the stage for half a century.

What impresses, always, is the commitment of the Sarasota dancers, who throw themselves wholeheartedly into whatever style and choreographic text they are given. They believe in it—or convincingly pretend to—and thus, so do we. I can’t say I’m dying to see “Dante Sonata” again, but I was more than willing to take the journey through Ashton’s darker imaginings this one time. The dancers make it worth the audience’s while. And there’s always “Rhapsody” to look forward to.