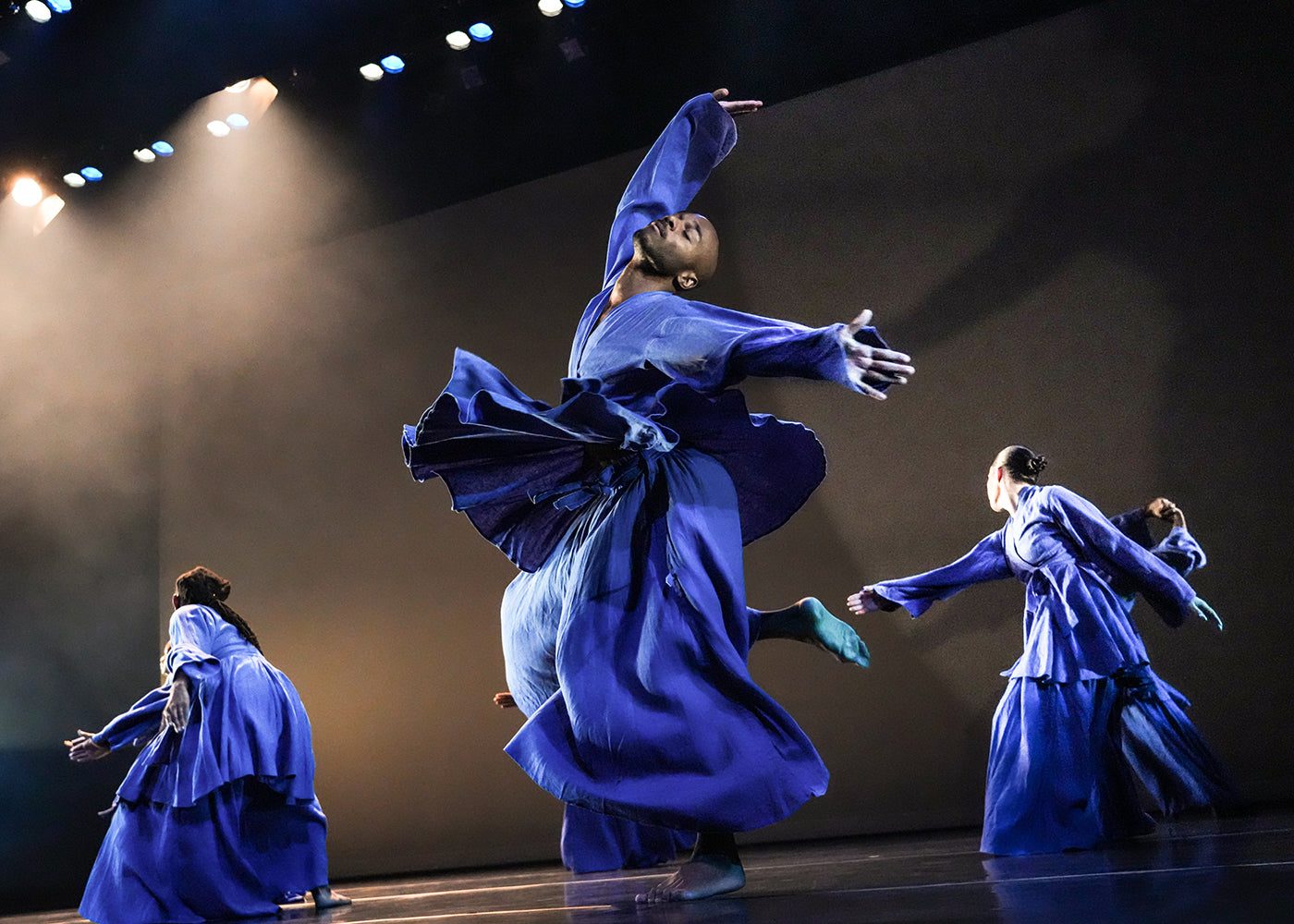 If an evening of dances from Ronald K. Brown/Evidence could be said to leave me wanting, it is surely only because the dynamic and spirited dancers in Brown’s rousing compositions leave me wanting more. On Tuesday evening at the Joyce Theater, this was the case once again. I would have happily stayed put in my seat late into the evening if the show could have gone on longer. The three works on the program charted a range of moods and explored the worldly with a divine nuance.

It also didn’t hurt that the curtain opened with the Afro Latin Jazz Ensemble accompanying the dancers in Brown’s “Open Door.” At the top of this life-affirming, audience-enchanting dance—originally choreographed for Alvin Ailey American Dance Theater—Shaylin D. Watson begins a primer on Brown’s expansive and articulate movement vocabulary. Lyrical and yearning, yet still fully in command, Watson floats through grande pirouettes and sweeps low with fast, syncopated feet that bring attention to Andrew Andron’s dynamic piano solo. With lighting design from Al Crawford that emerges like daybreak (and would take us on a journey deep into the night at a club), Isaiah K. Harvey takes over where Watson left off, gesturing to the world surrounding him and drawing it close. When Watson returns, we enjoy the same long phrase with the two side by side, in a practiced, yet still loose, unison.

The mood shifts to a funkier groove with the addition of more musicians and dancers. With the bass, shakers, horns, and drums, it becomes an all-out party. Elbows cut the air, hips rock, spines undulate, and shoulders shimmy. A jazz square doubles as a full body heartbeat, the dancers leaning forward, shoulders and feet tapping out vital musical notes. A repeating motif where a dancer flips from lying face down to flat on their back in an instant—seen first on the always captivating Joyce Edwards—delights every time it is performed by yet another dancer, and then again later, as an ensemble.

By the time it morphs into a mambo club, their deft, joyful dancing is a given and how they relate to one another as partners, as a community, feels most spectacular with its glittering eye contact and knowing smiles. They are having fun and so are we, much of the audience bobbing in their seats.

Likewise, the other two works on the program benefitted from what felt like a deep affinity for what they were dancing and for each other.

In “Grace,” the final dance of the evening, Shayla Alayre Caldwell sets a more reverent tone in a solo to gospel music. Her presence is sheer power, every extension of her limbs hits like a long pull of oxygen into the lungs, the low swoops of her shoulders a cathartic exhale. Her strength and the clarity of her technique, along with some nods to “Revelations,” makes it is easy to see how this work also originated with the Ailey company.

But as engaging as the solos and duets are, it is the group sections that draw the ‘oohs’ and ‘aahs.’ The dancers are at their most potent when they are in full force, whether it is the men roving in and out of diagonal patterns to a disco beat or the women confronting the audience in a line, their cool palms upturned toward us. And perhaps surprisingly, it is these smallest, most vernacular flourishes—like this flick of the palms up, the subtle thrusts of hips and shoulders, a hand swiping at a nose to begin a move, or even the almost throw-away, sassy walks off the stage—that show the immense individual style of these dance artists. Brown’s ability to combine such a mix of dance styles, from the African diaspora to jazz and modern, and gestures frames his work with the familiar comforts of the collective and aspirational dreams of where we might go together. Latching on to one, the other, or both, it doesn’t matter—all of it is takes off.

Utilizing speech and spoken word excerpts from the American political activist Angela Davis and a trove of black and white photographs from decades of Civil Rights protest (curated by Deborah Willis), the work delves head on into the never-ending fight for equality and justice for all. Davis’s sharp words and wise philosophy take on our notions of family and remind us of the mass incarceration of over one third of America’s population of young Black men. Original music from jazz pianist Jason Moran counters this vital public conversation with a sense of interiority and reflection.

Brown isn’t didactic as he weaves these elements with movement. The dancers don’t act out the big ideas; however, at times, the dancers accentuate every syllable of text, mapping the intricacy of Davis’s words with a startling quickness. In other moments, they quietly layer their magnified shadows over the photo collage streaming behind them, which includes images of women and children, activists being doused with fire hoses, marchers snaking in a line for as far as the eye can see, the poet Amanda Gorman reading at President Joe Biden’s inauguration, and what appears to be a mass grave. In an unforgettable solo, Demetrius Burns extends his chest skyward, arms overhead, layering his supple body over an image of a silhouetted fist and the Washington Monument

In an unforgettable solo, Demetrius Burns extends his chest skyward, arms overhead, layering his supple body over an image of a silhouetted fist and the Washington Monument.

From the earliest moments, Edwards and Burns lead the ensemble. Edwards’s stature is authoritative, but her refined quality is more complex, her lush port de bras and easeful style a blend of technical mastery and generous spirit. Burns is just as compelling in his multi-dimensional performance, equal parts strength and vulnerability. When his arms lift in a move that all too often presages police violence against Black people, it is easy to recognize the foreboding in that surrender but also possible to see something more spiritual, a gesture of coming in peace.

The flowing blue costumes from Omotayo Wunmi Olaiya extend and emphasize the movements of the dancers: the rhythmic side-to-side rocking, hands clasped in prayer, that returns throughout the dance and the wavelike undulations. The uniformity also adds to the camaraderie of the group, accentuating their attention to one another as envelop and slowly circle a weary and warning Breana Moore. When Burns removes the top of his costume and lays it gently down on center stage, it transforms into something else. As the work winds down, all of the dancers remove their tops and cradle them in their arms. One by one they offer this precious thing to the pile.

As the ensemble recombines into a group upstage right, the women place their hands on the backs of the men. A small gesture of care creating a strong final image and a buoy for the work ahead.

But the most uplifting moment of all? Brown, himself, walking onstage to join the cast for a curtain call—a simple move of huge significance after suffering a debilitating stroke in April of 2021. The theater was not large enough to contain his smile and so we took it, along with our notions of his perseverance, out into the night.

Previous
Off to the Races

Next
Isolation and Injustice