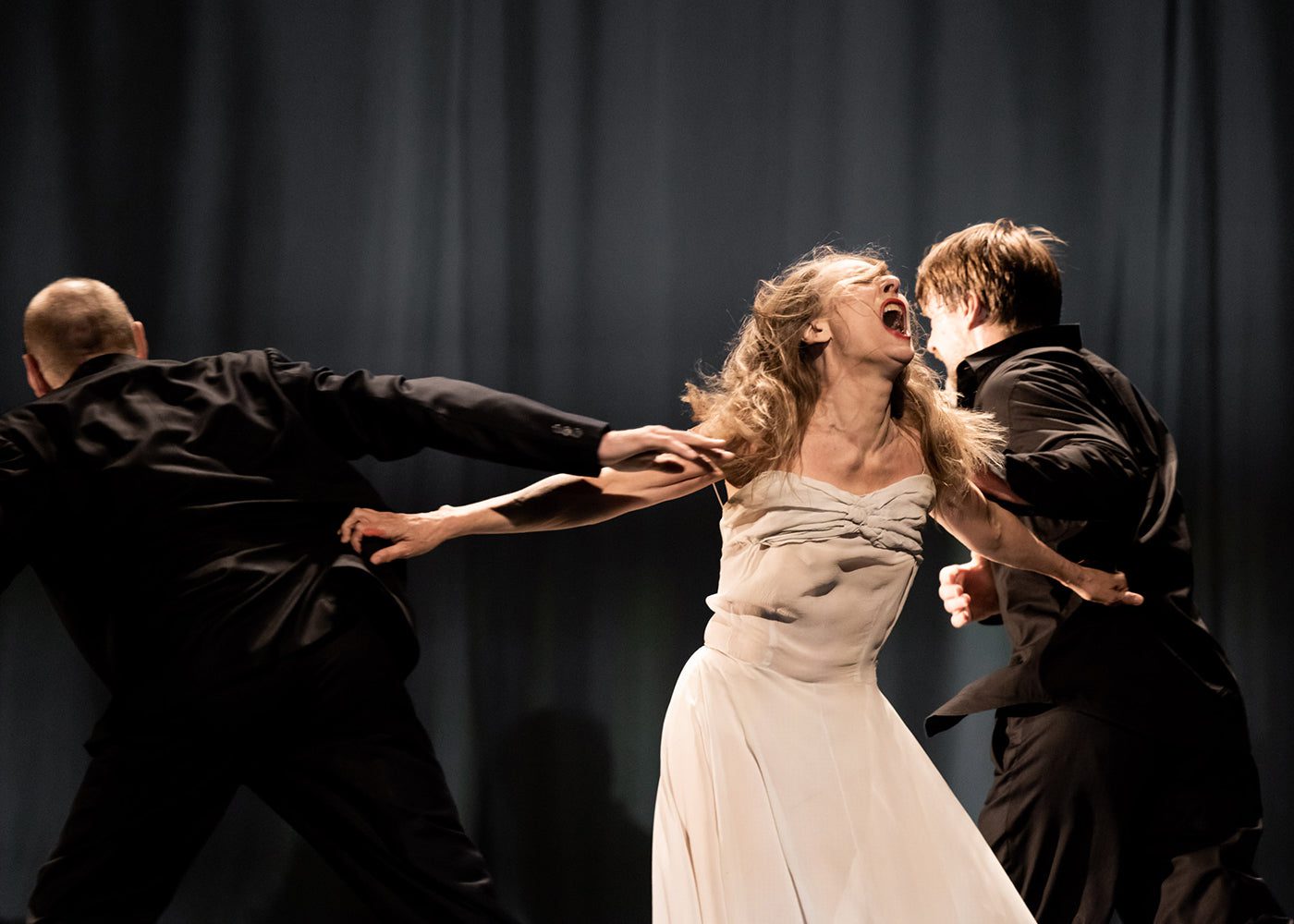 Pina Bausch’s penultimate work, “Sweet Mambo” premiered in 2008, following its counterpart “Bamboo Blues.” The two pieces were created in an attempt to explore how a single starting point—identical set design—could lead to two distinct pieces, developed by two different casts. “Sweet Mambo” was recently reconstructed by Alan Lucien Øyen, and performed in Wuppertal by the original cast, with the exception of Naomi Brito, company member since 2020/21, who danced the role originated by Regina Advento.

“Sweet Mambo” opens with a luminescent stage and white sheer drop curtains hanging from the ceiling and covering the back of the stage designed by Peter Pabst. Brito emerges from behind them proudly and elegantly, walking towards the audience with feline grace. As she starts speaking, she pronounces the name “Regina” a couple of times, as thought to teach us how to pronounce it correctly. She warns us not to forget her name, and maintains her gaze as she exits the scene, smiling. All the women, one by one during the piece, urge the spectators not to forget their names. It reads perhaps as an exhortation to remember them too, when one day they will leave the stage.

“Sweet Mambo” is composed of numerous such vignettes. At times, they are repeated, as though an invitation to look twice at certain images and find deeper meanings. The sequence of memorable acts, changing from despair to cheerfulness, creates a maze of emotions and thought, stimulated by skilful choreographic, dramaturgical and aesthetic choices.

As is usual in Bausch’s oeuvre, the performers often break the fourth wall speaking to the audience, and even asking them to do something. Julie Shanahan asks a spectator to open the zip of her dress. She is a shiny, sparkly character. Here she is bubbly and amusing speaking in English to non-English speakers and using various, random signs to communicate. At times though, hints of desperation seep out, and she transforms into an irritable person showing fatigue and boredom, having nervous and sudden breakdowns. A particularly striking scene when she screams “let me go” in a crescendo tone while trying to reach a voice screaming her name, and being constantly pulled back from Michael Strecker and Andrey Berezin.

An undercurrent of resigned desperation flows through many of the solos, duets and ensemble scenes. The performers’ staged aplomb and elegance bursts into fiery and harrowing moments. The level of tension builds with progressively higher and more strident outcries. Desolation and hopelessness are palpable in the compulsive running and falling, and abandonment of the body on the floor or in the arms of the men. Sensual nuances sink into frustration and detachment, formality merges with a silent helplessness steadily ingrained in the movements. Melancholy suffuses the whole performance.

The music, chosen by Bausch herself as with most of her works, and curated by Matthias Burkert and Andreas Eisenschneider, is an eclectic combination of songs and natural soundscapes. Excerpts of the black and white film Blue Fox by Viktor Tourjnsky are projected on the white curtains and appear to function as a utopian idyllic background, though colourless. The dancers, with their enchanting movements in front of the big screen, always lead the eye.

The performance by all the dancers is outstanding, radiating a never-ending energy, devoted passion and a fascinating beauty. The mens’ solos are energetic yet gloomy. At times they appear as evil, in other moments, victims of their own fault and of the women’s caprices. On occasions their masculine presence is participative, and engaged, other times aloof. The women, on the other hand, are constantly searching for a dialogue with the men. They embody dignity, grace, resilience, sensuality, as much as longing, dependency, frustration, and despair.

“Sweet Mambo” was the last piece for Héléna Pikon who leaves the stage at the end of this season. Nazareth Panadero retired last year but continues to dance as a guest. The other dancers remain company members, although they will perform less and less. The poignancy of this show was evident in the dancers. The audience too seemed emotionally touched; at the end of the show, the crowd exploded into a fifteen-minute-long standing ovation. Their chance to express full admiration, respect, fascination and love for a company that perseveres and thrives despite the physical absence of Bausch, and that continues to encourage us to connect and dream through a marvellous and magical yet realistic poetry.