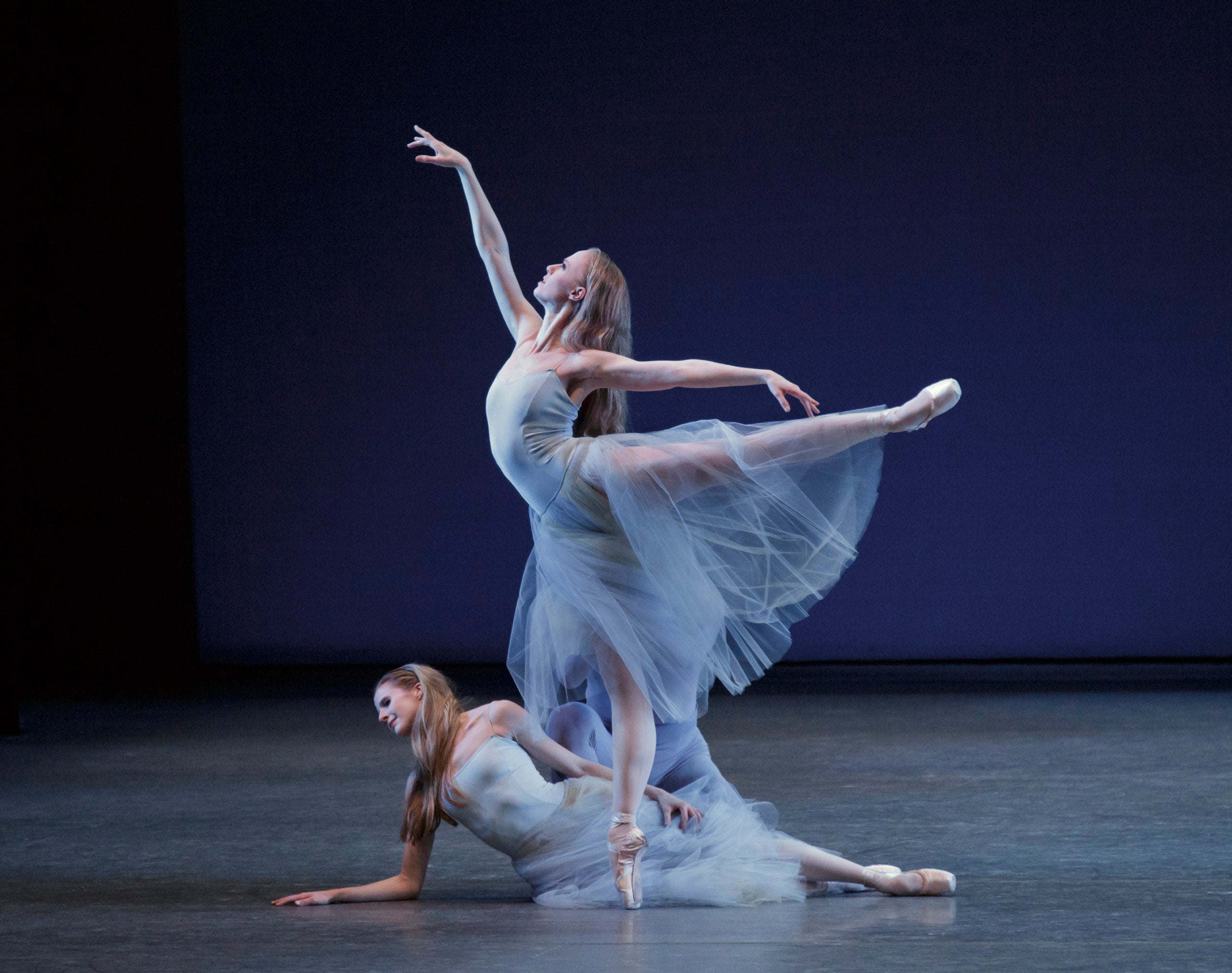 Saturday, January 24, was a big day for New York City Ballet as they held their annual birthday celebration for George Balanchine, called “Saturday at the Ballet with George,” which concluded with an evening bill that featured three timeless works from the great ballet master—“Serenade,” “Agon” and “Symphony in C.”

This program might have been subtitled “The Quintessential Balanchine,” for it included three ballets that encompassed some of the most essential principles of the Balanchine style, as well as a wide range of his choreographic aesthetics and innovation. Watching this program, one could easily understand why George Balanchine stands as the most important dance-maker of 20th century America—the choreographer who defined and shaped American classical ballet as an art form.

The moonlit “Serenade,” which Balanchine created in 1934 for the students of the School of American Ballet, was an important touchstone of his choreographic oeuvre and the first step in establishing the unique modern style of classical dancing in this country. It’s a deeply romantic ballet and the choreographic imagery inspired by its glorious music (Tchaikovsky’s Serenade for Strings) is replete with artistic invention and ethereal beauty.

No matter how many times I’ve seen it, the ballet’s opening tableau always takes my breath away. The vision of seventeen ballerinas in shimmering light blue gowns, standing solemnly still in diagonals, their hands extended forward and palms turned as if shielding them from the moonlight, has an air of eerie, rhapsodic mystery about it. They look like goddesses; and each of them is a personification of Balanchine’s ideal—a ballerina as a source of creative inspiration. This first scene in his very first ballet made in America encapsulates the central trait of the choreographer’s life-long artistic credo: “Ballet is a woman.”

As the music starts, the ballerinas gently lower their arms and assume a classical ballet stance. They no longer evoke divine creatures; these are simply ballet students taking their daily barre class. This sudden transformation carries the metaphorical meaning—and the very essence—of the creative process in ballet: it all starts in a classroom.

In “Serenade,” the movement vocabulary is strictly classical, but when looking at the dancers in motion, one immediately sees the novelty of Balanchine’s approach to choreography. The corps de ballet is no longer a static ornament framing the principal dancers, as was always the case in 19th century classical ballet. Balanchine gives the ballerinas of the corps a prominent part. In fact, in “Serenade,” the ensemble is always onstage, dancing non-stop. One can also notice how Balanchine changes the movement style itself. These ballerinas are hardly waifs or sylphs delicately skimming the stage on the tips of their toes in unhurried, floating manner. They look like feisty Amazons as they crisscross the space in swift, flying leaps as if born to be free of inhibition and restraint.

“Serenade” is an abstract dance; there is no story, nor are there specific personages, yet the imagery onstage is so rich and dramatically powerful that it creates an array of emotions and visions and inspires an infinite variety of interpretation. As a result, some of the roles have acquired their own names.

On this Saturday evening, rising to the occasion, the NYCB dancers gave a truly spectacular rendition of this iconic dance. Sterling Hyltin, as the Waltz Girl, was utterly romantic and poignant. This is the most coveted role of “Serenade,” for it offers plenty of dancing and interpretive opportunities for a ballerina. Hyltin brought to this role a sense of gentle warmth and purity, dancing with flawless style and wonderfully capturing in her movements the rich musical nuances of Tchaikovsky’s score. There is, however, a sense of tragedy and demise embedded in her role. The Waltz Girl is also known as the Fallen Heroine, who at the end of the dance is carried aloft by a trio of men in what looks like a mournful, funeral cortege. This final moment of “Serenade” is reminiscent of a communal prayer, rendering images that transcend both the music and the choreography. Hyltin’s performance was particularly heart-rending in this elegiac apotheosis of the piece.

Moving with luxurious spaciousness, Teresa Reichlen was superb in the role of the Dark Angel, a woman who blindfolds a young man (the excellent Ask la Cour), leading him to his fallen beloved. A principal dancer since 2009, Reichlen is one of the brightest stars among the company’s wealth of talent. She is stunningly beautiful, very tall and slim, with one of the most spectacular arabesques in business. Dramatically effective and stylistically pristine, her performance had an aura of otherworldliness and sensuality.

The spirited Erica Pereira left a memorable impression as the Russian Girl, bringing to the max the vivacious energy and gleeful charm of Tchaikovsky’s Tema Russo. Her partner, Robert Fairchild, fresh from his stint in Christopher Wheeldon’s musical “American in Paris,” was impressive as well, dancing with infectious abandon and zest.

“Agon,” from 1957, was the final ballet in Balanchine-Stravinsky “Greek” trilogy, which also included “Apollo” (1928) and “Orpheus” (1948). This ballet signifies a distinctively new choreographic style—a radically novel movement vocabulary which would become Balanchine’s hallmark. Here you will not find smooth, pure classical lines and flowing, elegant gestures; the movement lexicon in “Agon” is based on a thrusting impulse. Dressed in black-and-white practice uniforms, the dancers look like fearless athletes, slicing the air with their legs, thrusting their pelvises, twisting and turning their bodies in the most anti-classical manner. The choreography is sharp-edged, requiring precision, dynamism and super-energy in its execution. The fragmented nature of the ballet evokes an athletic exhibition of sorts, in which the dancers are arranged in intricate grouping and formations, all perfectly in sync with rhythmical complexities and unconventional textures of Stravinsky’s seminal score.

NYCB really knows how to pull off this technically demanding piece; and this “Agon” was a definitive winner—the cast was terrific at every level.

Of the principals, Maria Kowroski and Amar Ramasar created a sense of surreal magic onstage in the ballet’s central pas de deux. Theirs was not a conventional love duet. In it, the classical vocabulary is pushed to the extremes, with the dancers knotting their bodies into peculiar shapes and contours and demonstrating the most unusual partnering stances. The superb Kowroski was coldly detached as she stretched her limbs in super-human extensions, or was manipulated by Ramasar as if she was a marionette and he a puppeteer. But when she warped her gorgeous arabesque, wrapping her leg around his neck in the ballet’s most iconic image, she looked no longer a puppet but a dominatrix.

The excellent Megan LeCrone was composed, yet alluring, in her solo in Bransle Gay, responding to her inner metronome and the sounds of Spanish castanets with enticing movements of her shoulders; and Andrew Veyette gave an assured and rhythmically accurate reading of Sarabande.

The program—and the birthday celebration for Mr. Balanchine—culminated with a rousing performance of “Symphony in C.” I know of no dance with more powerful, life-affirming and mood-enhancing than this work. Taking inspiration from symphonic music of Georges Bizet, Balanchine conjured choreography that is at once astonishing and inspiring.

This dance has a special place in the company’s repertory; it was performed during NYCB’s inaugural program at City Center on October 11, 1948. (Two other pieces on the program were “Concerto Barocco” and “Orpheus,” both by Balanchine.)

The four movements of “Symphony in C” can be seen as a quartet of self-contained mini-ballets. Each has its own corps, two supporting couples and a principle couple.

The opening Allegro vivo sets the invigorating tone to the entire piece; and the lively Ashley Bouder and Chase Finlay as the leads brilliantly caught the vivacity and bubbly virtuosity of the choreography, accentuating from the start its dazzling quality and joyous spirit.

In the ballet’s tender Adagio, Sara Mearns made the most of her lush, expressive style of dancing, outlining softly and delicately her every movement. In its visual imagery, this section of the ballet evokes the romantic scenes of Odette and Siegfried from “Swan Lake;” and the emotionally-rich performance of Mearns imbued this moment of the dance with sweeping passion. The stately Jared Angle was her noble, sensitive partner.

The company’s rising star, Lauren Lovette, together with the spritely Gonzalo Garcia, brought loads of youthful spirit and invigorating gusto into the third movement.

Brittany Pollack and Adrian Danchig-Waring danced with remarkable speed and fluent skill in the concluding Allegro Vivace, before the entire cast joined them onstage for the exhilarating finale, giving Mr. Balanchine—and the ecstatic audience—a perfect gift of spectacular, unforgettable dancing.

Previous
In the Name of Freedom