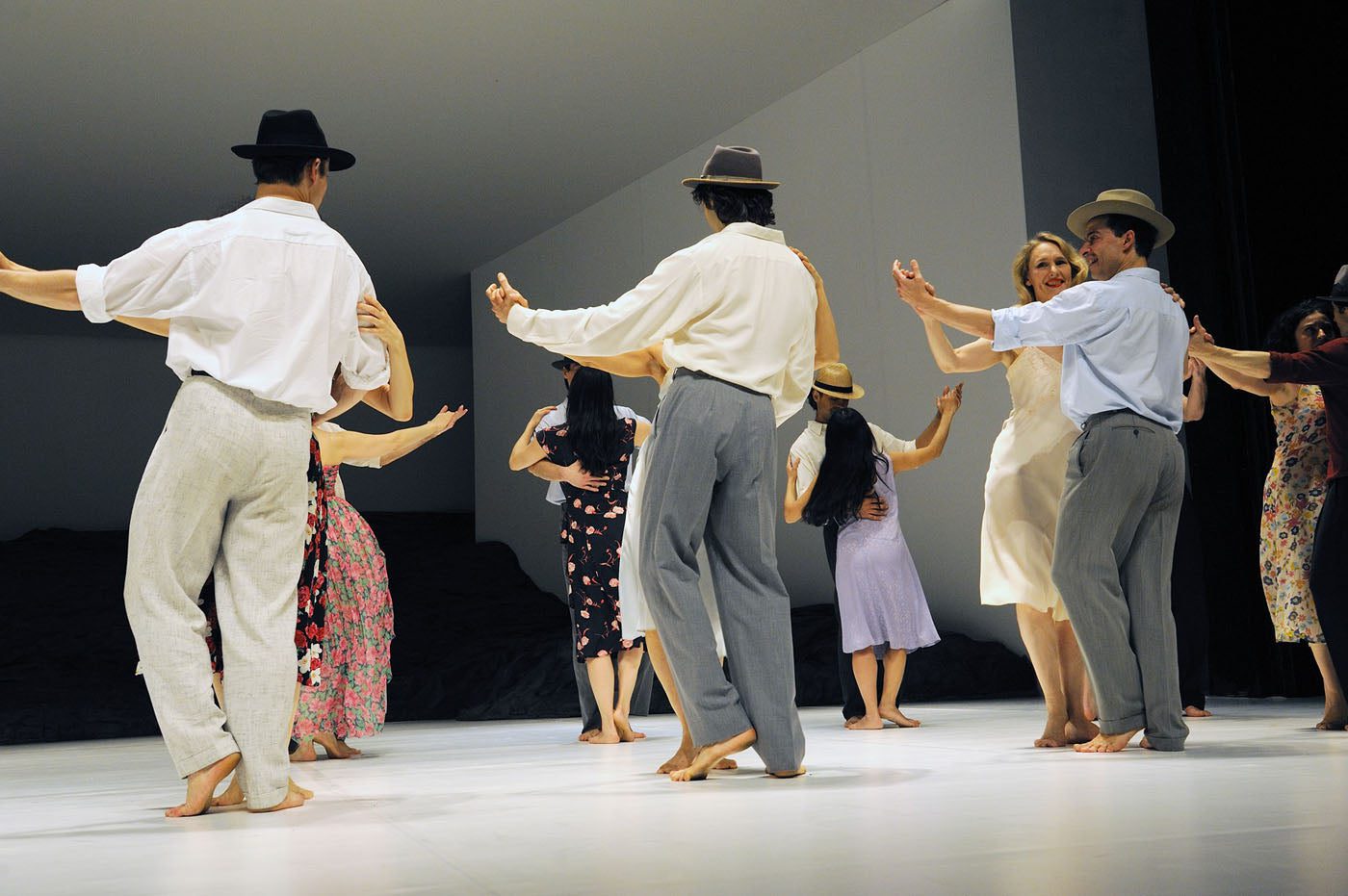 A Language for Life

Sambas, waterslides, live chickens on stage—nobody does dance theatre like Pina Bausch. The late choreographer’s Wuppertal-based company has just wrapped up a tour of “Masurca Fogo,” created during a three-week residency in Lisbon in 1998 as part of her World Cities series, a collection inspired by the cultures of various urban locales, from Rome to Budapest to Los Angeles.

It’s one of the more light-hearted works in the Bausch canon, an effervescent gambol of giddy grins and japes set to a medley that takes in Portuguese drumming and Duke Ellington alike. Like her darker material, though, Bausch’s trademark sensuality and surrealism are front and centre, as is her particularity of vision—emotionally charged and forged, as ever, in her aim of “finding a language for life.”

“Masurca Fogo” shares some of the same imagery as “como el musguito en la piedra (ay si si si),” Bausch’s final work before her death in 2009: statuesque women towering over adoring men, quirky displays of affection, bustling sun-soaked streetscapes. The vignettes it presents are whimsical, joyful, droll and anguished by turn, sometimes frivolous but by and large engaging as they mine rote human interactions for humour and pathos. A foreigner prompts giggles when she tries her hand at small talk in English. A frazzled woman abandons her primping in resignation after watching a young, effortless beauty glide by. A character jokes about a childhood teacher who demanded kisses, then is forced to bob for apples in a scene tinged with sexual violence. For every confession of insecurity or fear is an uplifting gag: a vandal pretending her spray paint is deodorant, an impromptu dance party in a beach hut assembled on the spot.

The languid procession of dresses, tresses and taut, shiny legs is a familiar Bausch device, one amped up here with a recurring motif of female pleasure: budding flowers projected onto the back screen, guttural sighs into a microphone, a winking run-down of the three phases of orgasm. It’s a gimmick to be sure, but one that works: it’s hard to turn away from the sight of a dozen glamorous women sunning themselves like lionesses, whether or not it sounds tired on the page.

It helps that there’s robust dancing to back it up. In another company’s hands, the work’s floaty knee-knocking and arm-waving might seem flimsy, but there’s potency with this 20-strong group, who dive into the fluid choreography with both individual flair and communal vigour, jogging, sauntering, falling, rearranging their limbs and rippling their arms like palm fronds in a storm. The transition from gentle to coarse and back again is steadfastly lyrical, lending a dreamy quality, as if they’re figures in some hazy, crazy hallucination. The reverie peaks in a daffy splish-splash set to “Smoke Rings,” complete with a slip ’n slide and a barking walrus.

At more than two hours long, “Masurca Fogo” isn’t totally judicious with its time: several sketches protract their punchline, and certain choreographic phrases feel out of place, including the spate of male solos in the first half. Still, it packs in a wealth of joy and emotional sincerity. What other choreographers transmute through aloofness and abstraction, Bausch tackles with candour and confidence—and how.

Next
Love, Lust and Death