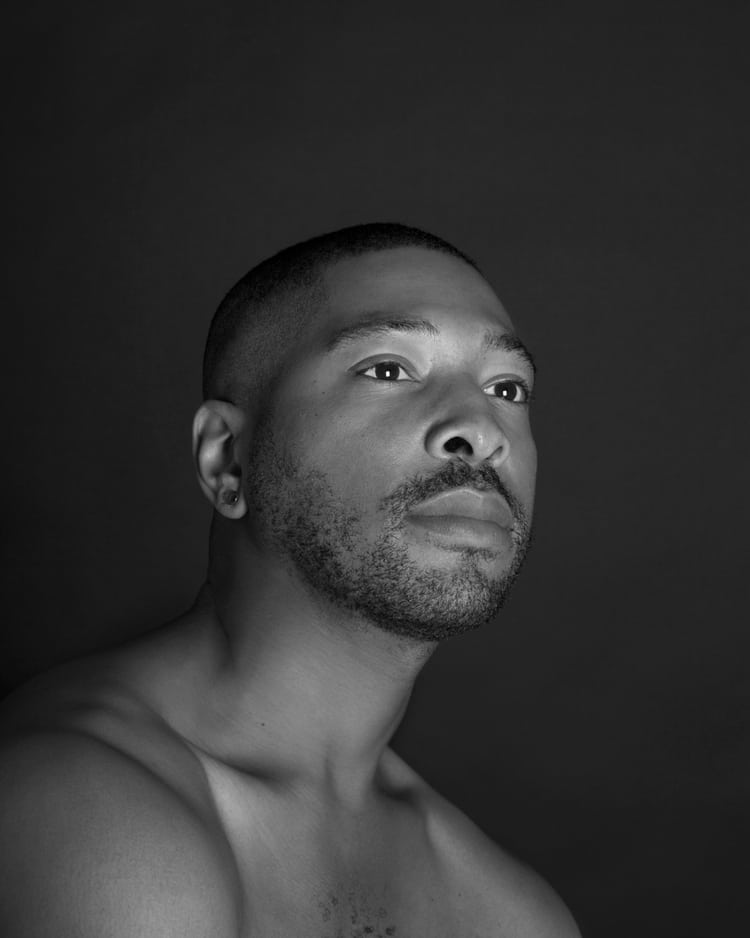 In conversation with Kyle Abraham

As the sun set on a humid Central Park the first evening of August, Kyle Abraham, the artistic director of A.I.M (a modern, genre-bending dance company formerly known as Abraham.In.Motion), spoke with Gibney’s new curatorial director Eva Yaa Asantewaa. In the few hours before A.I.M’s performance at the Summer Stage, they talked about Abraham’s performance style and influences, his advice to those who started dancing late in life, and his apprehension surrounding a piece he is currently choreographing for New York City Ballet.

“Everyone wants me to shake things up a lot,” Abraham told Yaa Asantewaa. “If you know me, it’s not good to give me too much freedom.”

New York City Ballet’s commission of Abraham in April of this year marked the first time Abraham would get an assignment quite like this. For starters, the company gave him nearly unlimited creative freedom and resources. If he wanted his piece to have a significantly longer run-time than the other performances in the program, he could. If he wanted the entire piece to be a solo, NYCB was ok with that. Not that he would, but that hypothetical freedom felt significant to Abraham. Here was an artist who, not too long ago, was unable to pay his company dancers a living wage. Now, his work was set to premiere at the Fall Gala of the most prestigious ballet companies in the United States.

This commission also holds an additional significance to NYCB. As the company continues moving forward in the wake of Peter Martins’s departure, the interim team’s new direction can be characterized by a desire to tap into the zeitgeist. In the same April announcement, NYCB also revealed that Emma Portner, a contemporary dancer and choreographer whose Instagram videos allowed her to leap to digital prominence, was also on the bill for the 2018-2019 season. Both Abraham and Portner are young, dynamic choreographers. Neither of their styles resemble the restrained cool of NYCB choreographic darling Justin Peck or others like him, and neither of their works have been set on large ballet companies before this.

During the discussion with Yaa Asantewaa, a man in the audience took the microphone and asked Abraham how he feels his choreography and racial identity was working to level the playing field for other artists of color. Abraham took a beat, then answered. “I mean, I’m just one person,” he said.

As a choreographer coming up in the dance world during the early 2000s, Abraham was made to signify more than himself. His rise spurred many (Yaa Asantewaa included, she notes in the interview) to draw parallels with that of Barack Obama. At NYCB, his commission takes on this additional weight.

“Not only am I a black choreographer I’m a modern choreographer,” Abraham told Dance Magazine writer Theresa Ruth Howard in May. With enough riding on it, opportunity can feel like both promise and ultimatum. “I have a fear that if this piece is seen as a failure, they will never hire another black choreographer again.”

Still, if his company’s performance at Summer Stage is any indication, Abraham’s work will be assured and nuanced—the work of a choreographer who is uniquely capable of creating work that captures what it feels like to be alive right now, while resisting simplistic associations for the sake of being topical.

The A.I.M. program on August 1st consisted of four pieces, which the company’s eight dancers performed with exquisite grace and technical strength. The first piece, Doug Varone’s “Strict Love,” was choreographed in 1994. Varone’s movement language—juxtaposition of hard and soft modalities, expressive arms and upper bodies gesturing and repeating, moment of quiet vulnerability, such as a tableau that finds the entire company held in a coccyx balance, then coming out of it to lie still on their backs—reverberates throughout Abraham’s work as a clear guide and influence. The dancers captured the nuances of Varone’s choreography. Though the music is familiar and joyful (Varone’s piece is set to hits by the Jackson 5 and Diana Ross), there’s a tension between sadness and joy, vitality and pain, that gives the piece its weight.

“Quiet Dance,” Abraham’s next piece, picked up where “Strict Love” leaves off. While a soloist roamed a small corner of the stage, groups and couples formed and reformed nearby him, accentuating the simultaneous power and vulnerability of taking up space alone.

The final pieces, “Show Pony” a solo choreographed in 2018 and danced by Marcella Lewis, and “Drive,” choreographed in 2017, broadcast a more immediately cool and confident feel. Both seemed to take pleasure in the dancers’ state of being alive and present onstage together. The house music that thrummed in the background of “Drive” was infectious and sexy and freeing; dancers pulsed and moved together, arms mirroring the isolation and quickness of voguing. But with this fun and fierceness came an unexpected edge; the presence of a threat, somewhere in the distance, demanding ferocity in response. Though this threat was never actually embodied onstage, the support and community onstage gestured at a larger need for this vulnerability. Abraham choreographed this piece after the election, and it shows.

“I wanted to scream,” he told Yaa Asantewaa, to “celebrate who we are.” Though he wanted “Drive” to “have a knock to it,” he wanted to convey something larger. That the company was a united front, that he could create a space for community and celebration onstage, and that there are many ways for people to “feel united and not alone.” As the packed audience at Summer Stage cheered and danced in their seats, it was clear they got the message.

Next
Drag Me To Hell