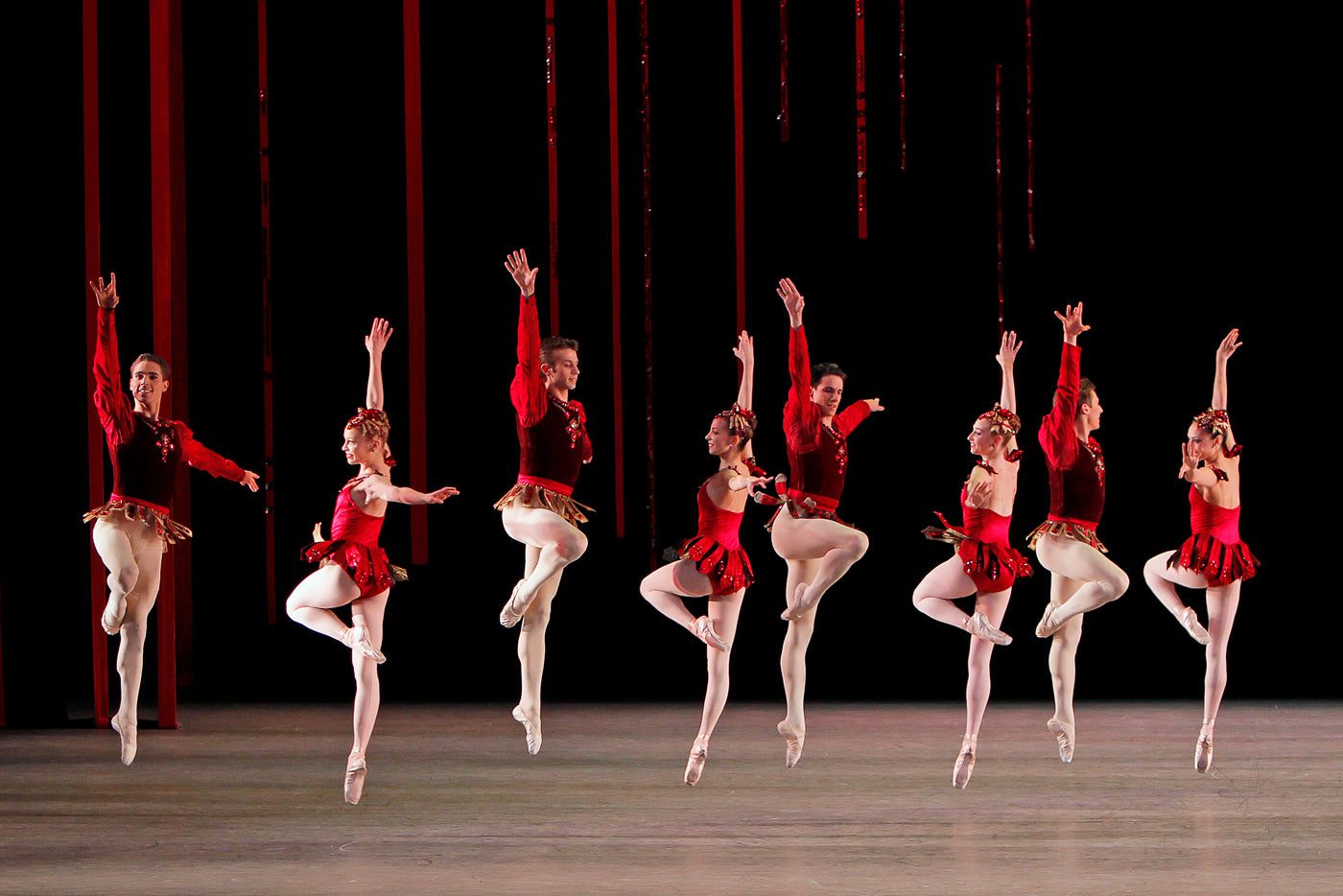 After attending the premiere of George Balanchine’s “Jewels,” on April 13, 1967, dance critic Clive Barnes described it in the New York Times as “too beautiful for words,” musing on the fact that at the time of its premiere the ballet had no title: “I can only presume that Mr. Balanchine must have taken one look at the extraordinary thing he created and at once found himself at a loss for words.”

More than 50 years after its creation, “Jewels” still retains its indescribable beauty, mystery, and power to leave audiences breathless. Balanchine’s choreography still casts its magic spell, revealing a myriad of new surprises and meanings. The performance I attended on Sunday, September 23 was no exception.

There was a palpable sense of urgency in the theater. Filling the house to the brim, the audience warmly greeted the cast before and after each act, and, on multiple occasions, rewarded the leads with numerous curtain calls. The dancers, in turn, showed their deep appreciation for the support. The atmosphere on the stage was electrifying; the dancing was consistently dedicated, spirited and often thrilling.

Three sections of “Jewels”—the pensive and poetic “Emeralds,” the dazzling and feisty “Rubies” and the regal “Diamonds”—bring Balanchine’s rich, multidimensional aesthetics into a sharp focus. With no story line, the ballet’s varied moods and styles are united by a common theme of precious stones; but the true beauty of “Jewels” lies enshrined in Balanchine’s unique choreographic exploration of the three musical compositions to which the ballet is set.

Accompanied by the soft-toned melodies by Gabriel Fauré, “Emeralds” shrouds the stage with serenity and sustained melancholy. This is the most mysterious part of the ballet: the choreography and the scenery create a vision of enchantment forest, animated with images of lovers and their romantic dreams.

Composed and stately, Lauren King moved through space with delicacy and touching grace, her flowing gestures accentuated the atmosphere of romantic reverie. She was partnered with ample assurance by the stately Daniel Applebaum—an elegant and courteous cavalier. The performance of Megan LeCrone, in the second ballerina role, alas, didn’t leave an impression. She seemed too stiff and stern for such a lyrical role; poetry and fragility, apparently, are not her strong suit. Yet I was impressed with the dancing of Harrison Ball in the pas de trois. He executed each step with an excellent definition and polish; his lines were clean, his jumps high, his manners generous. He has a noble bearing and he is an attentive and gracious partner—most definitely a principal dancer in the making. I am eager to see him in other leading roles.

A perennial crowd-pleaser, “Rubies,” brings a sudden shift of mood to the proceedings—from the lush, green pastures of “Emeralds” we are transported to a swanky night club where a party is in full swing. Gone are languid and silky-soft gestures. Forget a dreamy walk—the dominating movement motifs here are running and kicking. The playful and quirky atmosphere is established from the start, all fueled by Igor Stravinsky’s rhythmically propulsive and often acerbic score.

Sassily kicking and stabbing the floor with her long legs, Claire Kretzschmar was nothing less than a femme fatale at this gathering as she led a chorus of “showgirls” in what looked like a dazzling and visually stunning pageantry.

Lauren Lovette and Gonzalo Garcia brought loads of energy and mischievous glee into their dynamic duet (originated by Patricia McBride and Edward Villella). True to her name, Lovette is simply lovely in every role she takes. This part (which is usually danced by such powerful dynamos like Megan Fairchild and Ashley Bouder) seemed like a perfect fit for her sunny personality. She was beaming with joy while conquering, with effortless abandon, the choreography’s multiple athletic hurdles and sharply accented steps; and that sense of sheer happiness was absolutely infectious. Garcia matched her high-spirited disposition, vividly capturing in his dancing the choreography’s galloping pulse as well as its genuine wit and humor.

The ever-regal “Diamonds,” with its sweeping Tchaikovsky’s score, brings the entire ballet to a grand conclusion. With multiple allusions to the 19th-century classics, this final part of “Jewels” brings to mind the glory and glitter of the Imperial Russian Ballet of St. Petersburg.

In the central pas de deux, Teresa Reichlen inhabited the role of the ballet’s reigning queen to the fullest, radiating authority and an air of detachment. Her cavalier, the excellent Russell Janzen, provided her with able support, dancing with clean technique and appealing finesse. At times, their tender duet evoked a poignant love story, with images of the fragile Odette and her beloved Siegfried appearing before our eyes. When, at the end, Janzen dropped to his knee to kiss his ballerina’s hand it felt as if he completely and wholeheartedly surrendered himself in a worship of his ideal woman—the image that consistently resonates in Balanchine’s work.

It was hard to reconcile this iconic image with a deep crisis that New York City Ballet is currently going through. In the beginning of this year Peter Martins, a longtime artistic director of the company, abruptly retired amid the allegations of sexual harassment and abuse. The search for his replacement is currently under way. Then there is a lawsuit, filed in September by a former student at the School of American Ballet, Alexandra Waterbury, who accuses the company in fostering a “fraternity-like atmosphere” and condoning numerous aspects of the mistreatment of women. Three principal dancers—Chase Finlay, Amar Ramasar, and Zachary Catazaro—were fired as the result of this lawsuit for “inappropriate communications made via personal text and email” and for violating “the norms of conduct that New York City Ballet expects from its employees.” These are disturbing events and allegations that clouds the reputation and legacy of this company.

It was comforting to read the statement delivered from the stage by Teresa Reichlen at NYCB’s spring gala on September 27, in which she thanked the audience for their unwavering support during this trying time and reassured that the dancers of this company “will not put art before common decency or allow talent to sway our moral compass.” In her speech she stated that “NYCB dancers are standard bearers on the stage and we strive to carry that quality, purity and passion in all aspects of our lives.”

“We want to be role models and create an inspiring environment in which future generations of girls and boys will have access to both the joys and responsibilities that we have as dancers of NYCB. Each of us standing here tonight is inspired by the values essential to our artform: dignity, integrity, and honor,” she continued.

These are important and reassuring words. The dancers of this company are its most valued asset. They deserve to work in a safe and respectful environment. It’s up to the new leadership of NYCB to restore and maintain the ethical and moral integrity of the institution that has long been regarded as a cultural jewel of the dance world.