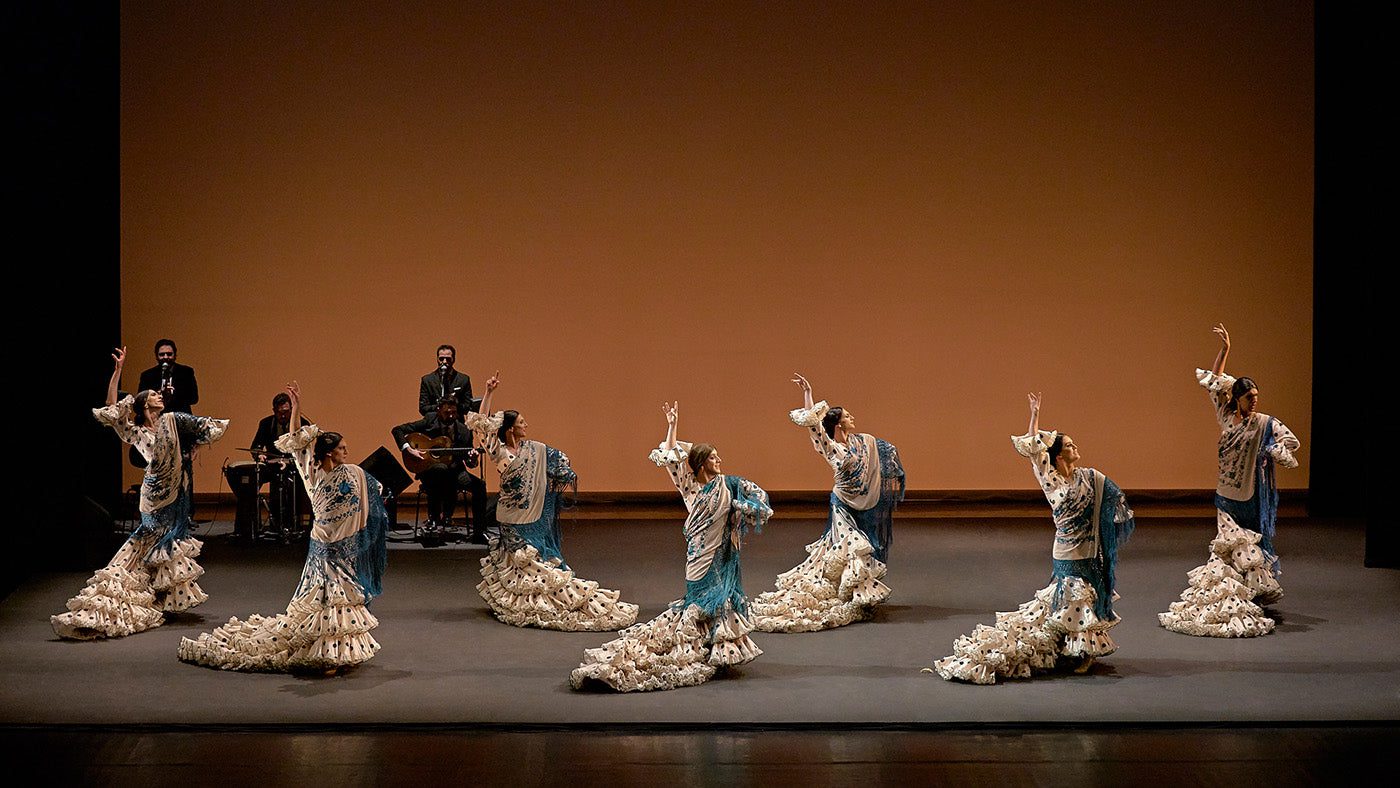 In March 2020, just as the Flamenco Festival was rolling into town, the world shut down. The dancers packed up their flamenco shoes and went home. The festival’s return, two years later, then, is also a welcome return to one of the city’s most celebratory yearly rituals. (This is the festival’s twentieth anniversary.) Even if this year’s edition is smaller than earlier ones, with just two dance shows at City Center versus four or five or more, the overwhelming sense is one of relief. The flamencos are back.

Back in 2020, I was particularly looking forward to the New York premiere of Manuel Liñan’s “Viva!,” a show in which seven male dancers perform in flamenco drag: long dresses, fringed shawls (mantones), flowers in their hair. The show has been a big hit in Spain, where it swept aside conventions of what was seen as acceptable on the flamenco stage. Liñan is a highly respected dancer and teacher, but only began performing in bata de cola (long-tailed flamenco dress) a few years ago. Now he is considered an expert in the genre. He has said in interviews that he had dreamed of dancing in a dress ever since he was a child.

Unlike groups like the Ballet Trockadéro de Monte Carlo, Liñan’s company isn’t performing for laughs, though the show is not without its sense of irony and camp. But there is an overarching impression that for these dancers, performing in drag is more about expressing something very sincere: their love of flamenco, particularly a style of flamenco that is now somewhat forgotten. “Viva!” retains the colorful and celebratory style of an older generation of flamenco divas like Lola Flores and Carmen Sevilla.

Liñan’s troupe dances, sings, and claps the rhythm; Miguel Heredia, tall, imposing, is the principal vocalist. There is also a small group of male musicians and cantaores (singers) in male attire who accompany and support the dancers. Each dancer gets a solo. Part of the attraction of the show is how different these solos are from each other. Each dance is like a mini-portrait. Liñan is dramatic, even melodramatic at times, and sincere. Jonatan Miró, a compact, forceful dancer, pounds and drills into the floor, his legs flying beneath him with almost anarchic energy. Hugo Lopez, tall and lanky, teases his fellow dancers with his high extensions, and then, with a wink, falls to the floor, fluttering like the Dying Swan.

Daniel Ramos and Yoel Ferré do a rather funny, and competitive, but also impressive, demonstration of the quick footwork of the more classical “escuela bolera.” But my favorite moment in the show is when Liñan dons the long, frilly bata de cola and begins to glide around the stage, soon joined by the others. This explosion of fabric, swirling, swishing, is as exhilarating as the moment in which dozens of dancers waltz across the stage in white ballgowns in Balanchine’s “Vienna Waltzes.” Pure joy.

I had two reservations. The show is over-amplified. Everything is loud. More dynamic contrast would add more power, not less. And there is a tendency toward melodrama. At the end of the show, whe Liñan removes his dress and dances with it on his back, the image is touching. But when he then kneels and dances to the dress, it feels like a step too far. The audience can understand what he is getting at without having things spelled out quite so clearly.

Over-amplification was a problem at the second show, a “Gala Flamenca,” as well. This was particularly egregious given the participation of a truly exceptional singer, María Terremoto. Only 22, she is the daughter and grand-daughter of flamenco singers, and possessed of a full, warm, expressive voice. A voice like hers deserves more subtle amplification, to allow for a fuller range of color and dynamics.

In other ways, the gala, also directed by Liñan, was highly enjoyable. There were six musicians and three dancers: Mercedes Ruiz, Eduardo Guerrero, and María Moreno. Each demonstrated a completely individual style of dancing. Each danced one or two solos, and took part in the group numbers. What the format lacked in spontaneity it made up for in variety and virtuosity.

Moreno, compact and grounded, danced an alegrías in a bright red bata de cola. As she revolved, it seemed to expand around her, engulfing her in a sea of flounces. The high point was the opening, in which she performed astounding feats with a huge, fringed shawl, or mantón, in silence. It flickered and billowed around her. The effect was magical.

Ruiz, slender, with a striking profile, performed two solos, one with Terremoto. The two women faced off, standing physically close to each other, the energy passing from one to the other and back again. Ruiz, in white trousers, displayed a great variety of rhythms. Her soleá, later in the evening, was also full of shifts. She shook her shoulders saucily, placed her hands on her hips, faced the audience; then she suddenly shook and crouched down, like a sorceress gathering her spells. At those moments, it seemed anything could happen.

Guerrero, in contrast, is a flamenco dancer in the Rockstar mold. Tall, long-legged, long-armed, with a striking face and large hands, he commands attention. He is also a master of the playful, dramatic pause, preferably on one leg, almost taunting his audience to beg for more. More interestingly, he twists and bends his body in surprising ways, moving his arms backward and overhead like pincers, twisting his hips this way while his torso goes that way. At times, his body seems to fold itself into shapes that seem almost impossible, like something out of science fiction.

With moves like that, and charisma to burn, he could dispense with the self-congratulatory smirk with which he ends his solo. Why not let the dancing speak for itself?

But then, let’s face it, such hammy effects are part of the fun. The Flamenco Festival is a purveyor of serious dance, but there is space, too, for spectacle, entertainment, and a level of exuberance that New York seldom gets to see.

Previous
Far Away and Personal with Janie Taylor

Next
Many Ways to Listen