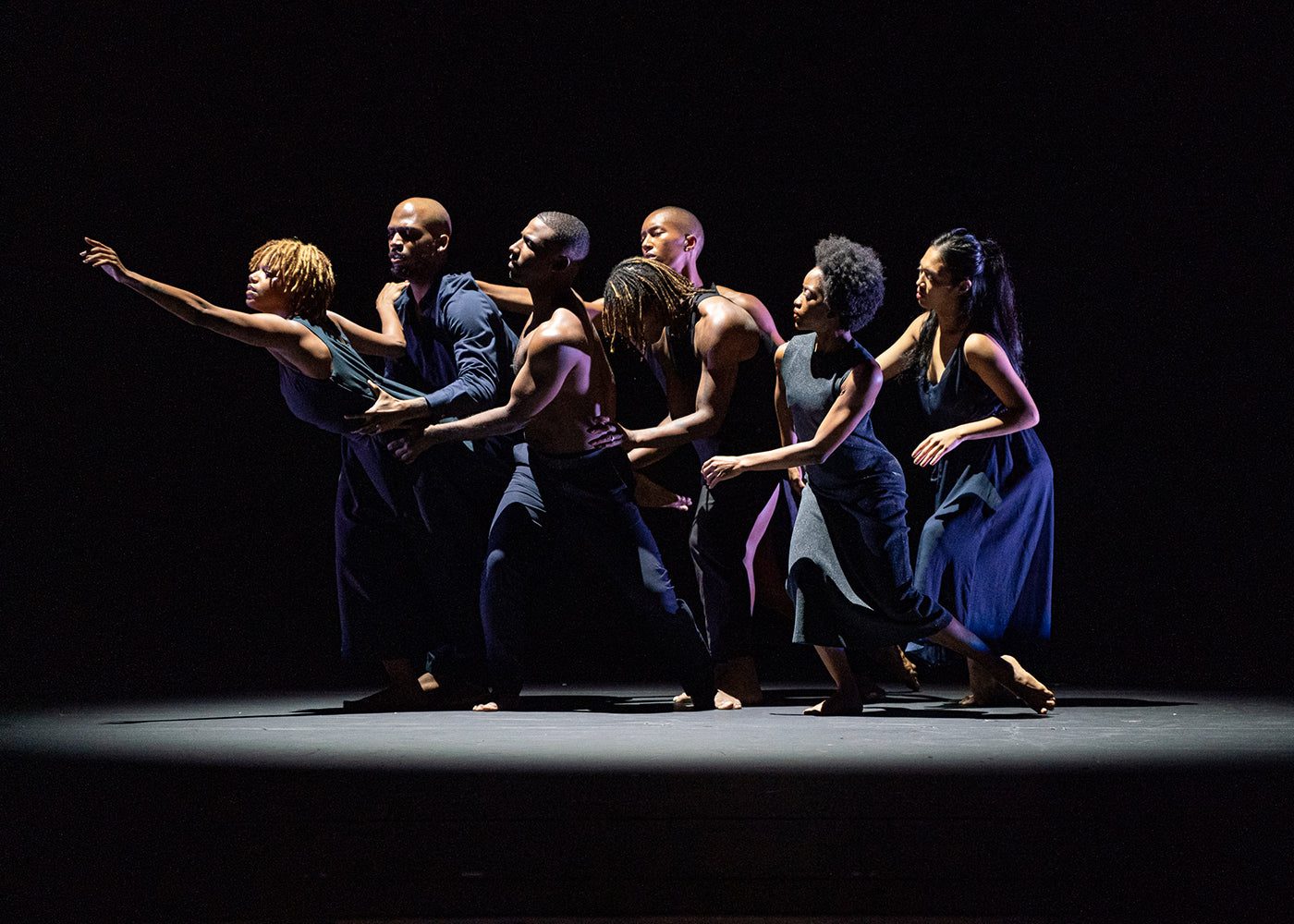 Chuck Schumer appeared at the opening night of the 2021 Fall for Dance Festival to proudly declare that the Save Our Stages Act passed by the Senate last year rescued all the arts in New York City. I’m not sure that’s entirely accurate, but I didn’t begrudge him the victory lap. And with the return of the live, giddy crowds to City Center for the FFDF, it did feel like business as usual in the dance world for a blissful moment. But when the curtain went up to reveal a massive triangular scaffold with three people dressed as ersatz superheroes perched atop it like pigeons, I found myself grappling with the surprising question: what exactly constitutes a dance?

The Streb Extreme Action troupe opened the show with a series of Evel Knievel stunt pieces. In the first, “Molinette,” the aforementioned trio of Action Heroes (that is how the company members are listed in the program) was affixed by their boots to the central bar. They rotated around it as if being roasted on a spit. There was some vicarious pleasure to be had in watching them succumb to gravity and centrifugal force, as one experiences while watching trapeze artists at the circus. The trio spoke their count-offs aloud and gleefully narrated their spinning methods—like “arch” or “curl”—which threaded nearly enough humor throughout the piece to overcome its inherent one-trick-pony problem. But was this dance, or an acrobatic stunt? It was gimmicky, but somewhat charming, and I wish the Streb group had stopped there.

The curtain dropped and the Emcee/DJ Felix Hess popped out to rile up the crowd in between set pieces, mainly to give the horde of drill-wielding stagehands on ladders enough time to dismantle and erect the elaborate gymnastic apparatuses. “Add” and “Pole Vaults” were the next actual segments, and they were done on solid ground before a translucent scrim while the noisy construction scene bustled in the background. These two works were wholly underwhelming: in the first, a new trio of Heroes wearing the same faux Captain America unitards performed, at high speed, what appeared to be a series of deranged Cross Fit tasks gone wrong. They splatted over and over again on the hard stage, the echoes of their body slams eliciting gasps from the audience. One Hero shouted a cue to start, but it was unclear if the three were supposed to be performing the sequence in unison or in canon—neither of which was accomplished. Was the timing here immaterial or imprecisely executed? “Pole Vaults” was even worse, with Jackie Carlson doing some high school Color guard moves with a long baton—though I liked the spunky style of her neon yellow mohawk and her bright red lipstick.

Then Hess returned with Hero Cassandra Joseph to kill more time while the crew put together a gigantic trampoline. They spelled out S-T-R-E-B with lame dance moves and unironically shot a t-shirt cannon into the upper balconies. I was really over it by the time Hess made the audience do the Wave and play call and response games. I’m just getting comfortable with the idea of sitting in a packed theater among other vaccinated, masked (though many improperly) strangers. Given the times, it was asinine to have a full house shouting—especially since the text was as insipid as: “when I say fall for, you say dance.” Jesus.

The last stunt piece, “Air,” had eight Heroes jumping on the supersized trampoline and then bellyflopping forcefully onto a thick mat at the front of the stage like some kamikaze Blue Man Group. Every now and then there was a pretty airborne moment, like when three Heroes bouncing in the plank position resembled flying fish cresting over a wave. Carlson and Daniel Rysak—who served as the team leader in “Molinette” and “Air”—clearly had been good gymnasts back in the day, and they performed some fancier flips. But, to a man, the cast all slammed their bodies facedown and flat as pancakes with each dismount from the trampoline. These faceplants were horrific. Though I could see the absurd humor in it, I took no joy in thinking about the beating their ribcages, spines, and breasts were taking. I wasn’t the only one: the oofs and winces coming from the audience were as much part of the soundtrack as the monotonous Freshbeatz track played by the onstage DJ. To be clear, the Heroes seemed beyond happy to be doing what they were doing. But that made it even creepier, like it was some cult challenge and they were all drinking the Koolaid.

I suppose my main problem with the Streb portion of the evening was not whether or not it was dance, but what niche it was supposed to fill at all. If I want to see dazzling aerial acrobatics, I’ll see far superior ones at the Cirque du Soleil. For infinitely more impressive gymnastics, there’s the Olympics. Here, it was as if every Hero was suffering from the Twisties. The whole thing was like a bad spoof of American Ninja Warrior. Mostly though, it reminded me of open play time at the New York Kids Club. I’ve logged several hours in kiddie gyms over the past five years, and “Air” did not seem all that different from watching a bunch of children exploring their physicality in a padded room. The Heroes just grinned maniacally instead of wailing when they wiped out. Does that make it art? Also, it is a far more pleasurable experience to watch toddlers wondrously decipher their physical limits than it is to watch middle-aged adults forcibly abut theirs. For what it’s worth, much of the audience seemed to find it entertaining. Perhaps I’ve sustained too many injuries to be able to enjoy the Streb brand of motivational crashing. Moving on . . .

Thankfully, the A.I.M. troupe followed on the bill, and with the NY premiere of “Our Indigo: If We Were a Love Song” Kyle Abraham’s winning streak continues. This work, set to six Nina Simone tracks, was the polar opposite of the aggressively pandering Streb antics. In fact, much of the dancing was done facing the backdrop rather than the audience. The superb cast of seven was dressed in varying shades of black, with Dan Scully’s lighting design likewise plumbing the dark end of the spectrum. “Our Indigo” felt personal and intimate—it was as if we in the audience were spying on private scenes through neighboring apartment windows. The opening number, “Black is the Color of My True Love’s Hair” was the only group dance. At one point, while Simone breathily sustained the word “black,” the group arched back slowly to expose their throats to the overhead spotlight. This display of collective vulnerability was startling and poignant.

Donovan Reed was a standout in his flaming solo to “Keeper of the Flame” (seriously, only Abraham could pull that pun off!) and also in a sensuous pas de deux with the talented Jae Neal, “Don’t Explain.” Abraham has the ability, like Alexei Ratmansky, to infuse his choreography with vague narrative impetus. There are no pat stories, but there are distinct moods and much detailed characterization in his dances. Abraham also excels at mashing up genres and styles, and here Nina Simone was a perfect collaborator. In “Little Girl Blue” Simone improbably samples “Good King Wenceslas.” In the same subversive spirit, Abraham had the excellent Gianna Theodore breakdancing to the tiddly piano intrusions of this theme. Claude “CJ” Johnson paced his long solo “Wild is the Wind” beautifully, building to a rapturous explosion of emotion. And Catherine Kirk’s brief, haunting solo to the spoken track “Images,” was a surprising yet effective closer. She repeated the gesture of self-consciously tapping her shoulders, head, and then shoulders again. It was powerfully symbolic paired with Simone’s text. This piece will run at BAM in the winter. Go see it.

The evening closed with the Fall for Dance commission “Sweet Gwen Suite,” a tribute overseen by Nicole Fosse to commemorate the longtime choreographic collaboration between her parents: Gwen Verdon and Bob Fosse. New York City Ballet soloist Georgina Pazcoguin brilliantly assumed the Verdon role, flanked by Zachary Downer and Tyler Eisenreich. The Fosse style is so distinct, and so oft-quoted, that I forgot how jokingly self-aware Fosse was himself. The crowd chuckled when Pazcoguin first lifted her head and took a puff of her cigarette. She was decked in a bedazzled, bellbottomed, bronze cowgirl unitard complete with a hat, a medallion belt, and a cropped jacket. I had seen Aaron Sanz as the Rhinestone Cowboy in Balanchine’s “Western Symphony” at the NYCB the night before, and this getup made him appear tastefully understated in comparison. The Fosse/Verdon choreography was winking, sexy, and wonderful. Small pelvis isolations registered in the nosebleed seats, and the influence on the likes of Beyoncé, Michael Jackson, and Lil Nas X was amusingly obvious.

Though history is being rewritten concerning how much credit Fosse and/or Verdon should take for many works, there is no mistaking their strong, unified choreographic voice. It was interesting to have this hallmark example of a signature style directly following Abraham’s chameleonic genius. It was exactly what I expect from the FFDF: a head scratcher or two, but also serious food for thought generated by unexpected juxtapositions in programming. What a joy to have it back!

Next
Singular and Strong