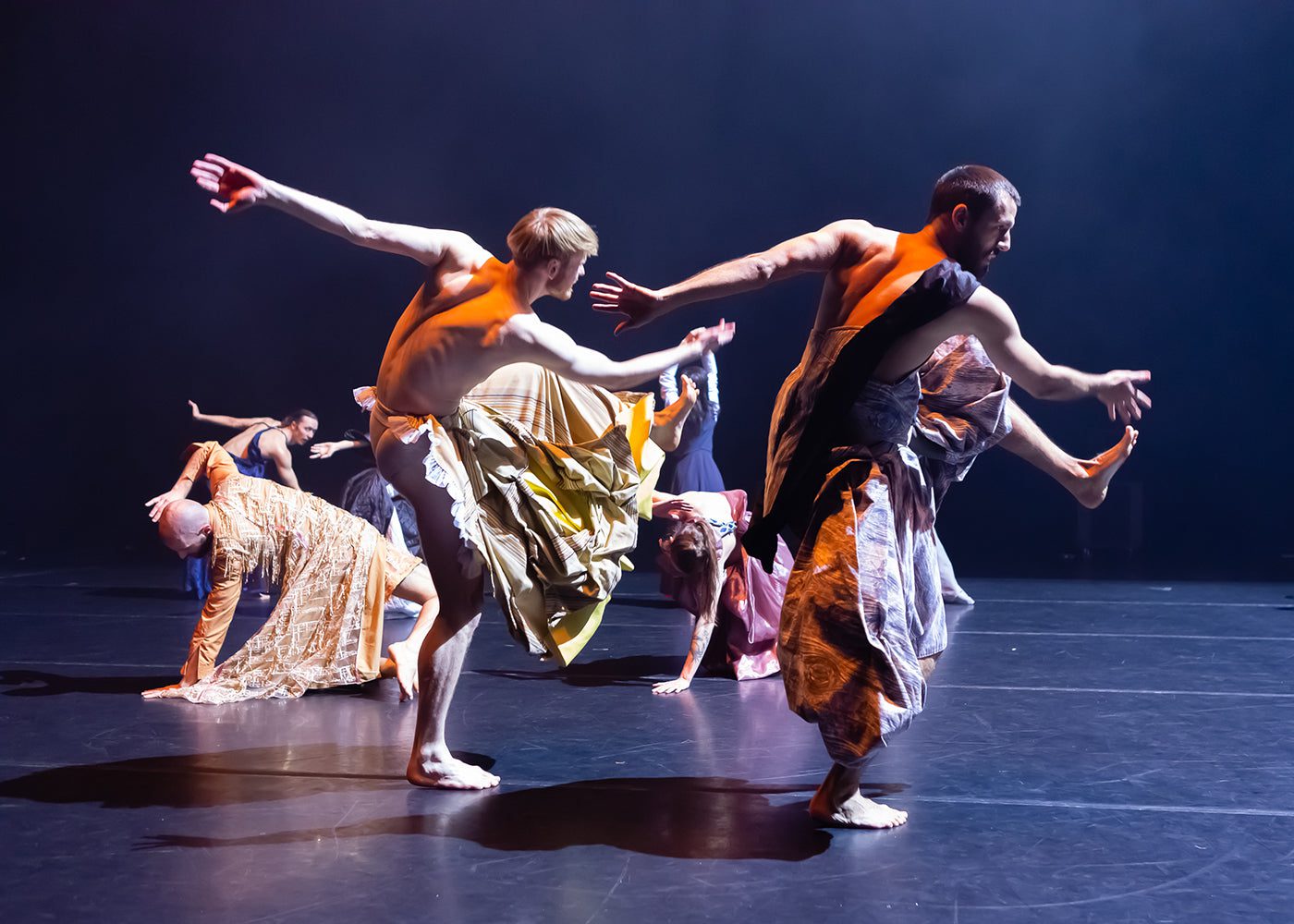 Emanuel Gat's “Lovetrain2020” set to music by Tears for Fears

What is it about Emanuel Gat’s “Lovetrain2020” that is so captivating? The piece, which came to the Brooklyn Academy of Music this week, is set to songs by the emo-electronica band Tears for Fears, and that is certainly part of its charm, at least for members of my generation (Generation X), which, let’s face it, constitutes a significant portion of BAM’s audience. But it’s hardly one of those jukebox medleys that basks in the beats of a previous era. Nostalgia is part, but not all, of the story.

Really, the evening draws its strength from a combinations of elements that add up to a kind of elation, though the feeling does ebb and flow as the evening goes on. First and foremost, there are the fabulous costumes by Thomas Bradley, who is also a dancer in the France-based  company Emanuel Gat Dance. Fantastical constructions of layered texture and colors, they add volume and whimsy to the dance, and contribute to the sense one has at times of peering into a painting by Velázquez or Caravaggio.

And speaking of Caravaggio, there is the lighting, designed by Emanuel Gat, whose shifting intensity and focus lends drama and contour to the action (again, as in a painting). There are Gat’s dancers, all interesting to watch, unique, at times feral and strange, at others touchingly human. And yes, the booming, keening vocals of Tears for Fears’ Roland Orzabal and Curt Smith, couched in the industrial, synth-heavy sound the band was famous for. A perfect soundtrack for the solitary reflections of gloomy teenagers. At times, one can’t help losing oneself in the music’s voluptuous, solipsistic groove. (There was a lot of head bobbing at BAM.)

What haven’t I mentioned? Ah yes, the choreography. This is not a comment on its effectiveness, for despite the fact that it often feels like a continuous stream of improvisation, it works well with the other elements. The dance is described as being “created with and performed by” the dancers, and that’s exactly the way it looks. It is not difficult to imagine the dancers working alone and in small groups (there is very little partnering), to develop a vocabulary that suits each of their bodies, and that can then be transferred to others. It consists, for the most part, of moves that are pedestrian, though by no means easy to execute: jagged slashing for the arms and legs, lunges that look like they could pull the body in half and dissolve knees, running, buckling, sliding, shaking, and in one witty moment, a hula-like undulation of the hips.

In one section, the dancers balance on one leg, in variations of yoga poses, and in another they gesture toward each other like the figures in Jacques Louis David’s The Death of Socrates. One man skitters across the stage, holding up the edges of his long skirt like a Tudor lady-in-waiting rushing to assist his Queen, only to slide on the floor, aided by the skirt’s silky surface. Then he sashays off, into one of a series of doorways or portals that line the rear of the stage, behind which we see figures in profile, walking along a fog-filled corridor. Where are they going? What are they talking about?

None of the movement reflects what is being sung, really, nor does it exactly replicate the rhythm of the songs, though everything the dancers do appears to respond in some way to the atmosphere and dynamics of the music. It is as if the whole dance were taking place on another plane, a room in outer space where rhythm and coordination follow different rules.  This keeps the goings-on from becoming banal.

More interesting are the dancers themselves, and the way they fill the movement and interactions with their personalities. Having never seen the company before, I can’t name the dancers, but several of them stand out, including a tall, rangy blonde in a yellow dress, in the “I Believe” section, who crouches and runs like a crazed animal, and then stands at the lip of the stage, looking vulnerable (but not mawkish) and holding out her hands to the audience. (Shades of Pina Bausch, without the self-congratulatory irony.) A man in a sequined dress who joins her lowers himself to the floor and worships at her feet. You can see why a person might want to do that.

Robert Bridger, with his rear end exposed (his skirt only covers the front of his body), does an ecstatic dance, mouth open, twitching, rocking, stretching to “Mad World.” His state of bliss translates so well that you feel yourself dancing alongside him.

Admittedly, some passages, particularly the ones that happen in silence, begin to feel protracted. And there are times when the dance looks too much like an improvisation exercise. But by the end, something has happened.

The dance begins with a sense of isolation. The dancers share the stage, but seem almost unaware of each other. But gradually, that disconnect dissolves. “Lovetrain2020” was created and first performed at the height of the pandemic, and Gat likely saw it as an antidote to the feelings of isolation it caused. Over the course of the piece, the invisible partitions between the dancers melt away. By the finale, set to “Sowing the Seeds of Love,” the people onstage have become a group, or rather a conglomeration of groups. Dancers move together and apart, mirroring, imitating, responding to one another. Smaller alliances form and dissolve. And as this happens, and the faces of the dancers open up, the audience finds itself drawn into their hazy, eccentric, jagged euphoria.