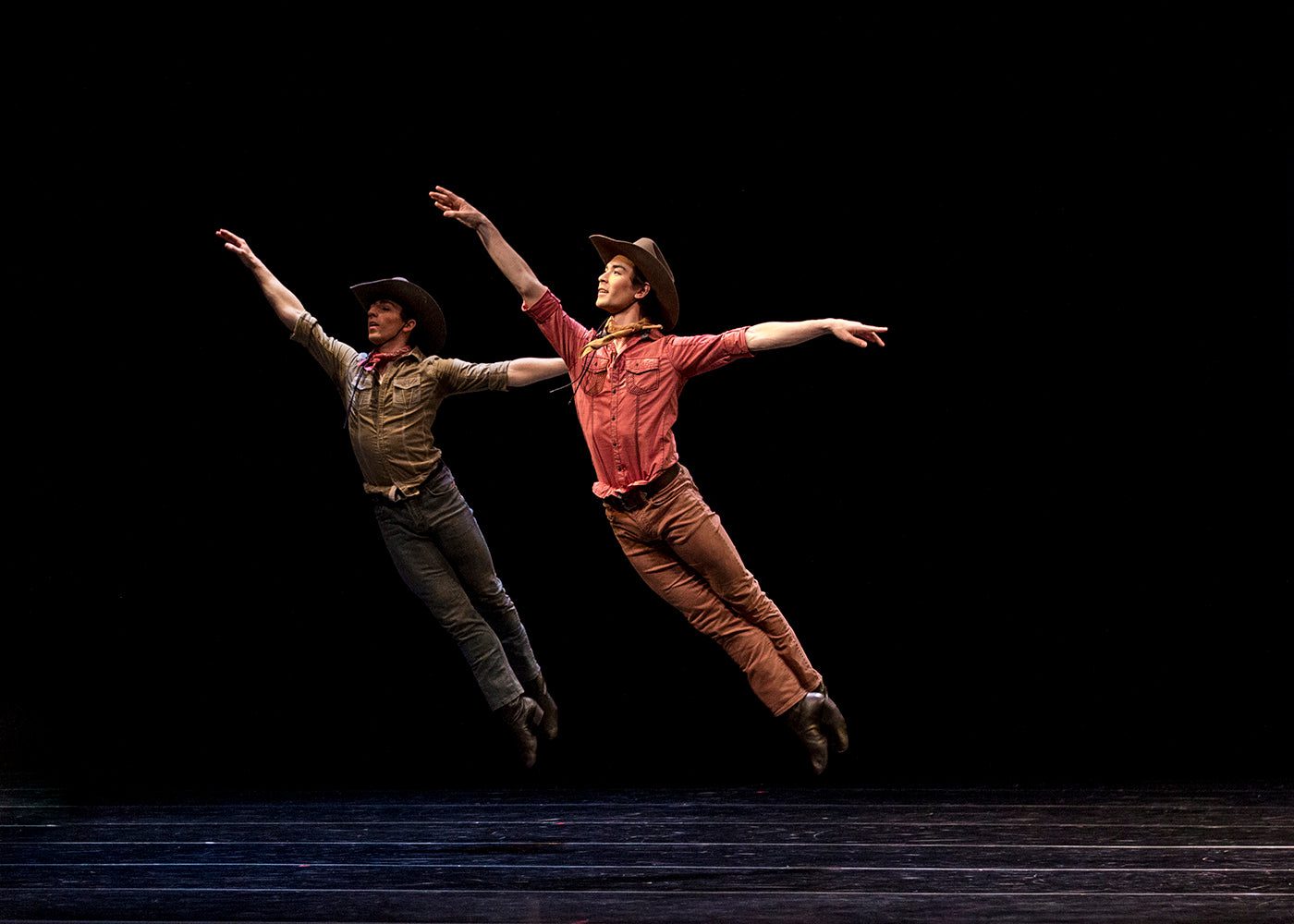 Noah Martzall and Christopher D’Ariano in Donald Byrd’s “And the sky is not cloudy all day.” Photograph by Angela Sterling
Rachel Howard·
Reviews
·6

I’m having a pandemic love affair with Pacific Northwest Ballet. It’s most unexpected, as so many of the emotional complexities of the past year have been. I live in California’s Bay Area; San Francisco Ballet has been my “home” company for two decades; I feel a loyalty to them. Yet it cannot be denied that when it comes to meeting the many challenges of these times with grace, authenticity, and whole-heartedness, Pacific Northwest Ballet has proven not just impressive but exceptionally endearing. It’s their behind-the-scenes glimpses of the dancers in each program’s “Five Minute Call” that carve a place in one’s heart, and artistic director Peter Boal’s kind and committed program notes. It’s also their new rep.

This is especially true in the fourth program of their digital repertory season with the first of two world premieres. Donald Byrd’s “And the sky is not cloudy all day” is a wonderfully weird work of art.

What we have here is an African American modern dance master directing six men in a boots-and-ten-gallon-hat-clad evocation of a John Wayne movie, set to minimalist music for string quartet by John Adams. Is this satire, or something stranger? In his program note, Byrd writes that he is rethinking the mythic West and the racial implications of playing “cowboys and Indians” as a child: “the movement West brought with it the genocidal murder of the Indigenous people, now turned into a game for boys.” But even without Byrd’s commentary, a viewer can see that this is hardly “Bonanza” served straight-up.

The immediate stage picture evokes Agnes DeMille’s “Rodeo,” with the projection of an OK Corral landscape at the back, though this is contained on a screen rather than enveloping the whole stage, which makes one think of the movies and suggests a subtle irony. The men stride in, bowl-legged. Soon they are heel-clicking and thigh-slapping, but the music has more starkness and edge than a soaring Copland fantasia. And the dancing gets stranger.

At first, Kyle Davis is moving big and fast, delivering entrechat in those leather clodhoppers. Gradually, the virtuosity, interspersed with belt-hitching, leans more towards traditionally feminine steps. Ezra Thomson whips through fouette turns, and the ensemble gambols with pas de chat. It’s not camp, exactly. Is this some kind of cowboy-trolling on Byrd’s part? And then comes Davis’s solo.

He twirls his hips—a little fandango? The twirling takes over different parts of his body, as though he’s a human lasso. Different parts swirl, driven by a churning violin, while his gaze at the camera remains wily, but not exactly teasing. Finally he throws off his hat, and it’s like watching a Champagne cork pop. And then Dylan Wald takes a solo, full of tensely unfolding developpes, and a jaw-dropper moment when he rolls his hips right through the middle splits. It all ends with a cowboy taking a seat to wistfully watch the sunset, and a static-y phonograph playing “Home on the Range.”

In short, it’s a masterful piece of ambiguity. The whole cast was strong, and they are fascinatingly intermingled. For instance, Thomson has stocky lines; Christopher D’Ariano is irrepressibly elegant, even in denim. There’s a Mark Morris-esque sense of inclusivity in how they are used for ensemble effect here, and it’s heartening.

The other world premiere, Alejandro Cerrudo’s “Future Memory,” left less of an impression. A large architectural element that resembles a concrete square looms overhead (the scenic design is by Cerrudo and Reed Nakayama). Wald and Elle Macy deliver a spinning duet, her feet skimming the floor like ice. The choreography alternates between wave-like and sculptural, each dancer taking yogic solos.

The music—a piecemeal of scores by Peter Gregson, Jóhan Jóhannsson, Dustin O’Halloran, and Jean-Michel Lais is mostly blandly lamenting; a clip of movie dialogue asking about anger sets a vague context of relationship difficulty. But I didn’t see the dynamics of the relationship change, as transfixing as these dancers are. (You could just watch the rippling of Wald’s torso on repeat if it’s dazzlement you’re after.) A bit of contrast came with the entrance of Leah Terada and Miles Pertl—Terada is a very interesting dancer with her occasionally flaring eyes, with a wonderful weightedness in her connection to the stage. You could imagine her really letting wild in an Ohad Naharin dance. But though she held the stage, “Future Memory” itself did not seem to build either emotionally or formally.

A pandemic-produced program offering two-thirds world premieres is quite a feat. Boal capped this slate with a 2017 performance of Alexei Ratmansky’s “Pictures at an Exhibition,” as staged by Wendy Whelan, and it was well worth the re-run. This is a piano ballet in the Jerome Robbins tradition set to the famous Mussorgsky score, featuring a community of ten that intermittently frolic together, then deliver strikingly contrasting solos and duets. The projections using a painting by Kandinsky are stimulating and grand, and Adeline André’s Rothko-esque shifts for the women float delightfully. Rachel Foster, who evidently retired two years ago, remained in mind long after the bows for her contrasts of agitation and calm. Karel Cruz, also recently retired, wielded his miles-long arms with weightless grace.

PNB has two more digital season programs coming up: Balanchine’s “Coppélia,” and a slate of Edwaard Liang and Christopher Wheeldon ballets featuring two world premieres. I’ll be happy for their Seattle audiences and sad for their new digital admirers when the company gets to return fully to McCall Hall.

Next
Afternoon of Fauns and Nymphs