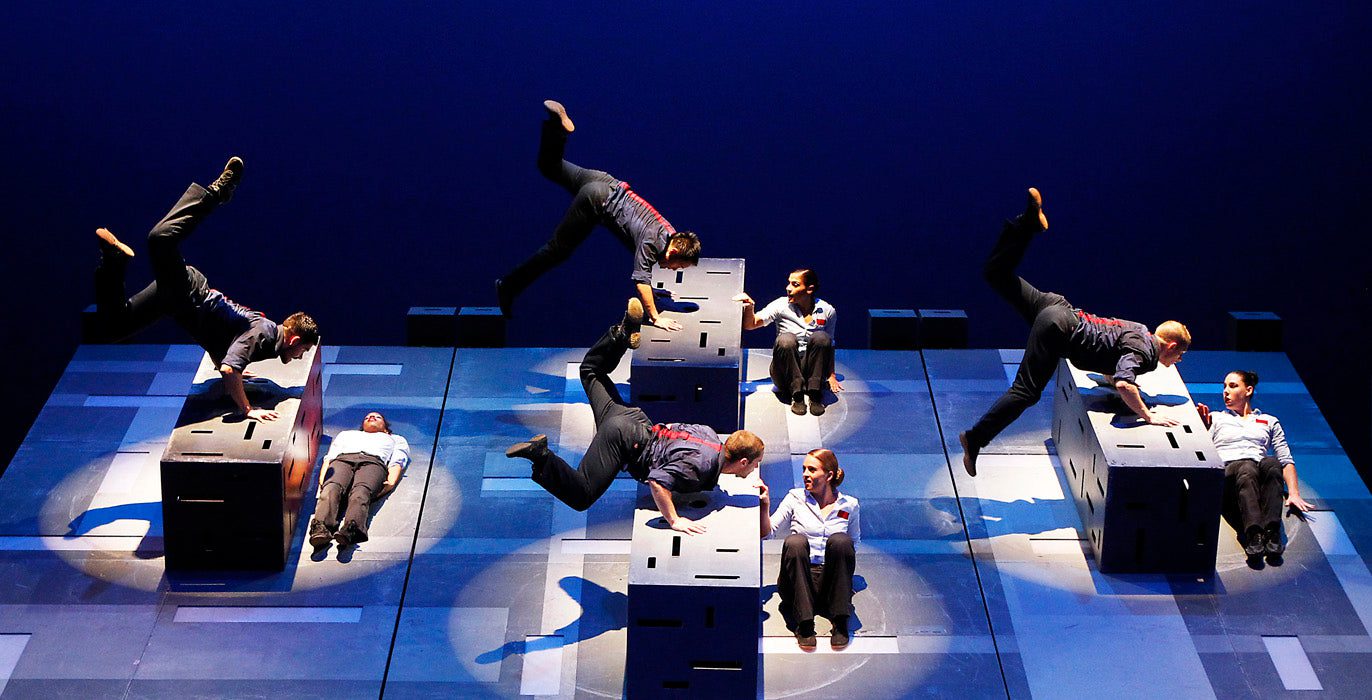 When it comes to geometric shapes, Jacques Heim, 50, is obsessed. After founding the risk-intensive, hyper-physical dance troupe Diavolo in Los Angeles in 1992, Paris-born Heim translated that passion into full-blown, custom designed stage sets. Included are a 2-1/2-ton aluminum wheel, a 17-foot-long rocking boat and an enormous cube with more configurations than Mr. Rubik’s.

When Chad Smith, the Los Angeles Philharmonic’s vice president of artistic planning, commissioned a trilogy from Heim in 2005, the long-haired dynamo jumped at the prospect. Collectively known as “L’Espace du Temps,” the first work, “Foreign Bodies,” debuted in 2007 at the Hollywood Bowl (summer home of the L.A. Phil, it seats 18,000), to original music composed and conducted by Esa-Pekka Salonen, then the orchestra’s music director. Followed by 2010’s “Fearful Symmetries,” set to John Adams (conducted by Bramwell Tovey), the trilogy concluded last September with “Fluid Infinities,” performed to music by Philip Glass, again conducted at the iconic venue by Tovey.

When performed separately (Diavolo is in its 17th year of international touring), each opus proves a huge hit, although all three had never before been performed in one evening … until, that is, the Movimentos Festival presented it (alas, without live music). Dubbed, “L’Espace du Temps,” the work is nothing short of dazzling, with Diavolo’s dozen dancers* owning the stage of the 900-seat theater, a power factory and perfect metaphor for performers that not only manipulate the various structures, but move like demi-Gods in the process.

Opening with “Foreign Bodies,” Salonen’s 2001, three-movement, 20-minute work, the dancers unite the cerebral (music) with the visceral, i.e. an 800-pound, 7 by-12 foot aluminum cube, which they masterfully reconfigure. A prop for the ages, the cube first houses the dancers, who soon emerge to booming percussion and pulsating brass: Arms jauntily appear through the cube’s holes, heads and bodies follow, as if an egg were cracking open, revealing new life. Then, in a gasp-worthy moment, the cube breaks apart and, Sisyphus-like, the dancers push the deconstructed sections together to create a pyramid in an ever-mutating landscape.

Dressed in red and black, with flowing skirts (all costumes designed by Brandon Grimm and Laura Brody), these are samurai courtesans by way of “The Hunger Games.” Performing astonishing feats of balance, strength and agility, all while maneuvering the massive metal sculpture from cube to bridge, to pyramids, as well as an ominous looking wall, the dancers are exquisitely lighted by John E.D. Bass and Evan Merryman Ritter.

Sumptuous partnering and genuine emotion punctuate the work; the quieter, Debussian second movement oozing eroticism. In yearning mode, the performers’ outstretched arms beckon—and find—consolation amid chaos. The final movement, with daredevil leaps from atop the cube into each others arms is breathtaking, as the crashing, closing chord signals the structure’s return to a simple cube, split-second timing crucial, all moves nailed, Olympian-style.

Dressed in workman-like trousers and shirts, dancers manipulate a pair of 150-pound U-shaped arches and a 360-pound aluminum and wood cube.  They also gambol on a trifurcated, 5,000 pound motorized stage that rakes up to 17 degrees, isolated rectangular areas frequently illuminated, as if by angels. Back-flipping off the 7’4” columns? No problem. Hopscotching atop the monoliths (think Kubrick’s 2001: A Space Odyssey)? Why not! As for executing soaring swan dives into the arms of able partners, Diavolonians could be exotic birds. Humorous ones, at that, as a pair of performers are squeezed between pillars before disappearing from view (hello, Penn and Teller!), only to pop up elsewhere.

At the core of “Symmetries,” though, lies an authentic humanity, with couples coming together, smooching and even neo-Lindy Hopping (a nod to Adams calling his music “a big boogie-woogie”). Such is the synchronic nature of the dance that the performers become one beating heart, one solitary pulse, yet connected to a vast universe, both unknown and unknowable.

“Fluid Infinities,” set to Glass’ 24-minute Third Symphony, is the trilogy’s most dancerly piece, with a dome the central structure. This dome, according to Heim, could be an egg, a spaceship or even somewhere in the unconscious. Unlike in the other works, dancers are not asked to manipulate the 1,600-pound orb, but to execute thrilling duets, trios and Rockettes-like unisons (with assistance from associate choreographer Monica Campbell), on a 1-ton stainless steel ‘deck.’ Needless to say, Windex bills are high!

We first see the ‘moon’ covered in silver lame, accompanied by a soundscape of astronauts communicating with N.A.S.A. This fabric quickly gets sucked up and into a hole, as the throbbing Glass score begins, and the performers, frolicking on, around and under the fiberglass planet, pop in and out of its Swiss-cheese-like openings as if terpsichorean mice.

As the half-sphere opens, quasi-yurtish, its crevices luminescent, the dancers, clad in flesh-colored unitards featuring skeletal renderings, seem safe within its confines, albeit constantly on the move: exploring, bonding, wondering, stirring to Glass’ modulating strings. Ah, but this is a transitory cosmos, yet cosmos it is; one begging the big questions: Where do we come from? Where are we going? What is our destiny?

As we behold this spectacular morphing scenario, this action painting of beautiful bodies, this Einsteinium world of physics made fleshly, we symbolically ride along with the dancers as they glide/crawl/pull/push themselves through an elongated Plexiglas tube, a cylinder reminiscent of Elon Musk’s Hyperloop.

All aboard! Yes, here is the transportation capsule ready to take us. But where? There is no destination. There are no answers. There is only this moment. “Houston, we don’t have a problem. What we have here…is art.”

Next
Lost in Transfiguration