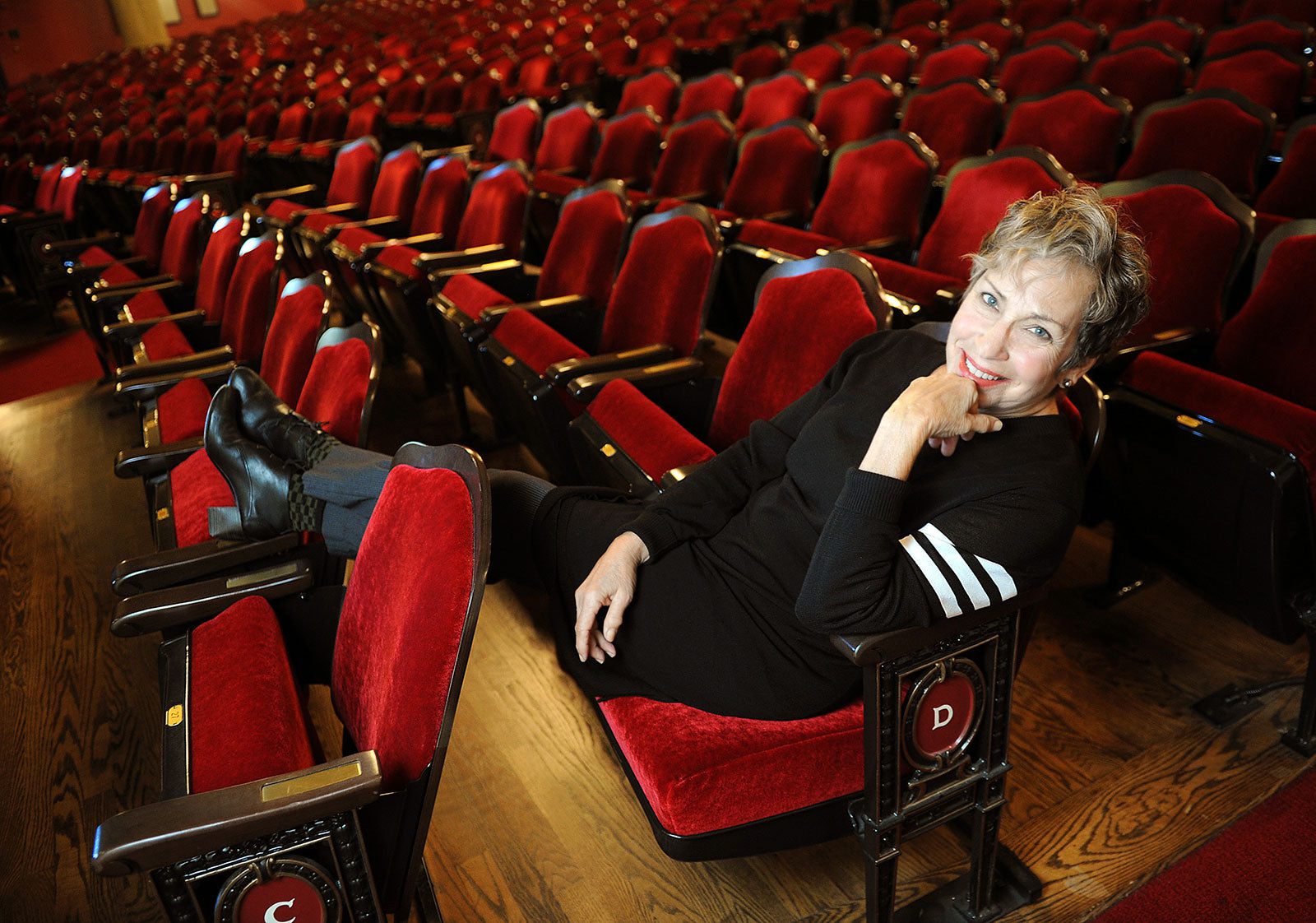 A Decade of DANCEworks

Dianne Vapnek, at the heart of DANCEworks

For a month in summer, across the country from the beating heart of dance in America, New York, the coastal town of Santa Barbara becomes the backdrop for a unique dance residency, known as DANCEworks. Over the last decade, the invitation-only residency hosted by the Lobero Theatre has been instrumental in the forging the artistic careers of some of the country’s foremost contemporary choreographers, including Aszure Barton, Kate Weare, Larry Keigwin and more.

DANCEworks celebrates its tenth anniversary this week with special solo performances by DANCEworks alumni on September 7 & 8, alongside the presentation of new work by this year’s artist in residence, Doug Elkins. “We’re thrilled to have everyone back,” DANCEworks artistic director Dianne Vapnek said, speaking by phone from her home in Santa Barbara.

Over the last ten years, Vapnek has invited select artists to spend an uninterrupted month to work within the Lobero Theatre, with technical support and artist housing, and to simply create. “We try not to ask too much more of the artists,” Vapnek says.

This focussed approach has yielded remarkable results, launching nine new and important works of modern dance on the Lobero stage, and elevating artists to new levels of recognition. But over and above facilitating new work and artistic growth, through DANCEworks a creative community has formed; “we’re almost like a family, I would say,” Vapnek says. “I really feel like we have been able to make a difference for a number of choreographers, and that’s very gratifying.“

Vapnek has nurtured a lifelong passion for dance, starting ballet at age three, and taking “every other sort of dance imaginable” until she developed asthma in her early teens. She went on to study philosophy at University of Miami, eventually finding her way back to dance, teaching courses and workshops. So it was a natural segway, when the Vapneks and their three daughters settled in Santa Barbara, to consider dance as a philanthropic focus.

“One of the original aims was to build an audience for contemporary dance,” Vapnek says. The precursor to DANCEworks was an ambitious city-wide dance festival, SUMMERDANCE, that Vapnek and her fellow dancer and friend Laurie Burnaby started in 1997. The festival took off immediately, hosting big-name artists such as Doug Varone the first year and Doug Elkins Dance Company the next. The guest list was equally A-list; Mikhail Baryshnikov attended in 2006. After 10 years of running the festival, which included a busy schedule of free performances, master classes, workshops and more, they decided to retire the model.

One of the most satisfying elements of the festival, Vapnek reflected, was offering time and space to the artists to create. “It wasn’t for everyone—it was sort of off the grid,” she said. During a meeting with Elkins in New York, Vapnek posed the question of whether that creative time had made a difference.

“I still remember his face—‘o, o, o, o my God yes, are you kidding?!’ He answered me in spades, basically. And that was the confirmation that I needed.”

She approached David Asbell, executive director of the Lobero Theatre with an idea for a residency modelled on Jacob’s Pillow in Massachusetts, and it clicked.

“We wanted to do something different. Something special and unique, with the intimacy to match the intimacy of our theatre. The format of DANCEworks succeeds at that,” Asbell, who is also the former operations director of Atlanta Ballet, writes.

The first residency was offered to Aszure Barton and artists in 2009. During Barton’s time there, she created “Busk,” a dance inspired by the streets of Santa Barbara itself. A formative work, “Busk” Vapnek has said, could not have been made at other residencies, for this very reason.

“It is a dream destination for an artist that supports and nurtures growth, aliveness and pure creativity,” Barton notes. The Canadian-born choreographer has since shot to stardom, having choreographed for major companies around the globe, and running a busy touring schedule of her own company, Aszure Barton and Company.

Weare, artistic director of Kate Weare Company, who joined the residency in 2017, was delighted to swap sweltering New York in August for the sequestered Lobero Theatre and work in “a space to take risks, and ask questions,” she said, speaking by phone from New York. Her work was a unique co-creation with Union Tanguera, French/Argentinean contemporary tango company based in Lyon and Buenos Aires. Throughout the development of “Sin Salida” / “In Love I Broke Beyond,” a cross-cultural collaboration not without its tensions, Weare says, “Dianne was with you through thick and thin.”

“It feels special, and personal with Dianne,” Weare continued, noting the value of the residency lies with its emphasis on process and exploration over product. “Even though we’re showing all the time there,” (members of the DANCEworks’ Friday Club are invited to view works in progress), “it’s to an audience of lively, educated, hungry individuals prepared by Dianne. It’s just a magical experience.”

A magical experience that has led to the creation of wildly different and unique works. 2015’s resident Adam Barruch created a physical theater production of Stephen Sondheim’s musical “Sweeney Todd” complete with live singing, a production that he is currently renovating. In 2012, Brian Brooks created the multi-disciplinary “Big City,” featuring an architectural set built by the performers as the dance unfolds. Mark Dendy, 2014 resident, created “Dystopian Distractions!” that Vapnek couldn’t stop thinking about for weeks. Shannon Gillen, artistic director of VIM VIGOR, filled the stage with rubber mulch for her presentation, “Future/Perfect,” described by the Santa Barbara Independent as “part Indie-film-like-play and part immersive electronic music concert” and “nevertheless all about dance.”

The residency is pitched at mid-career artists, who are often left in limbo when it comes to arts funding. “It has to make sense for the artist,” Vapnek says. And she has honed an instinct for knowing when it does—and that includes inviting artists to return to the residency if it appeals. In 2010, Vapnek invited New York-based Larry Keigwin to DANCEworks, where he created “Exit,” as well as the acclaimed “Bolero Santa Barbara,” a community-based production in which hundreds of Santa Barbarans danced, hula-hooped, hung from the rafters or pedalled a beach taxi.

Keigwin first came to Santa Barbara for SUMMERDANCE, where he attended as a dancer with Dendy Dance Theater, led by Mark Dendy. After viewing a solo Keigwin had created to Stevie Wonder’s “You Are The Sunshine Of My Life,” Vapnek encouraged him to do more. Shortly after, Keigwin launched his own company, Keigwin + Artists. In 2013 Keigwin returned to DANCEworks, enriching the creative community once again with a community-based work for dancers and non-dancers alike. Rosyln Sulcas writes for the New York Times, “Mr. Keigwin’s work is witty, kinetic and musically responsive, mixing the stretched lines of ballet with the more weighted, blunt quality of contemporary dance,” and his genial approach has won him a lot of fans.

Vapnek continues to invite artists in whose work she believes, and that includes Elkins, this year’s DANCEworks resident. A serial guest of SUMMERDANCE, during his first time at DANCEworks in 2011, he created the ripping “Mo(or)town/Redux,” a retelling of Shakespeare’s tragedy Othello set to a Motown and neo-Motown inspired score. The work was named on of the top 10 dance pieces of 2013 by critic Alastair Macaulay of the New York Times.

“I had no need to ask Doug what he might have in mind for this residency. I knew to trust his hard earned wisdom, his keen intellect, his curiosity and of course his abundant talent. The new work would naturally follow. It has. The trust has been justified,” Vapnek writes on her candid blog for DANCEworks.

The world breaks everyone and afterwards many are stronger at the broken places. Ernest Hemingway.

Having expressed an interest in Japan, Elkins joined the Vapneks on a trip to Kyoto last autumn. (Dianne has a love and fascination with Japan, and our interview concluded when it was time for her Japanese language lesson.) It was there, in ancient Kyoto that inspiration struck for his upcoming work. Kintsugi! he announced to Vapnek one evening. Kintsugi is the delicate art of repairing broken ceramics using lacquer and gold, such that the repaired item, with its veins of gold, is regarded as more beautiful and more interesting than the original unbroken item. Let us say, we are intrigued.

The tenth anniversary performances promise to be as unique as DANCEworks itself, as a collective of vastly different, equally brilliant choreographers come together to dance on a stage, meaningful to each of them, in front of an audience who has likely seen, and possibly been part of, a host of stories over the years. And at the centre of it all will be Dianne Vapnek, visionary philanthropist, dance lover. “She’s more than a patron,” Weare said, “she’s all heart.”