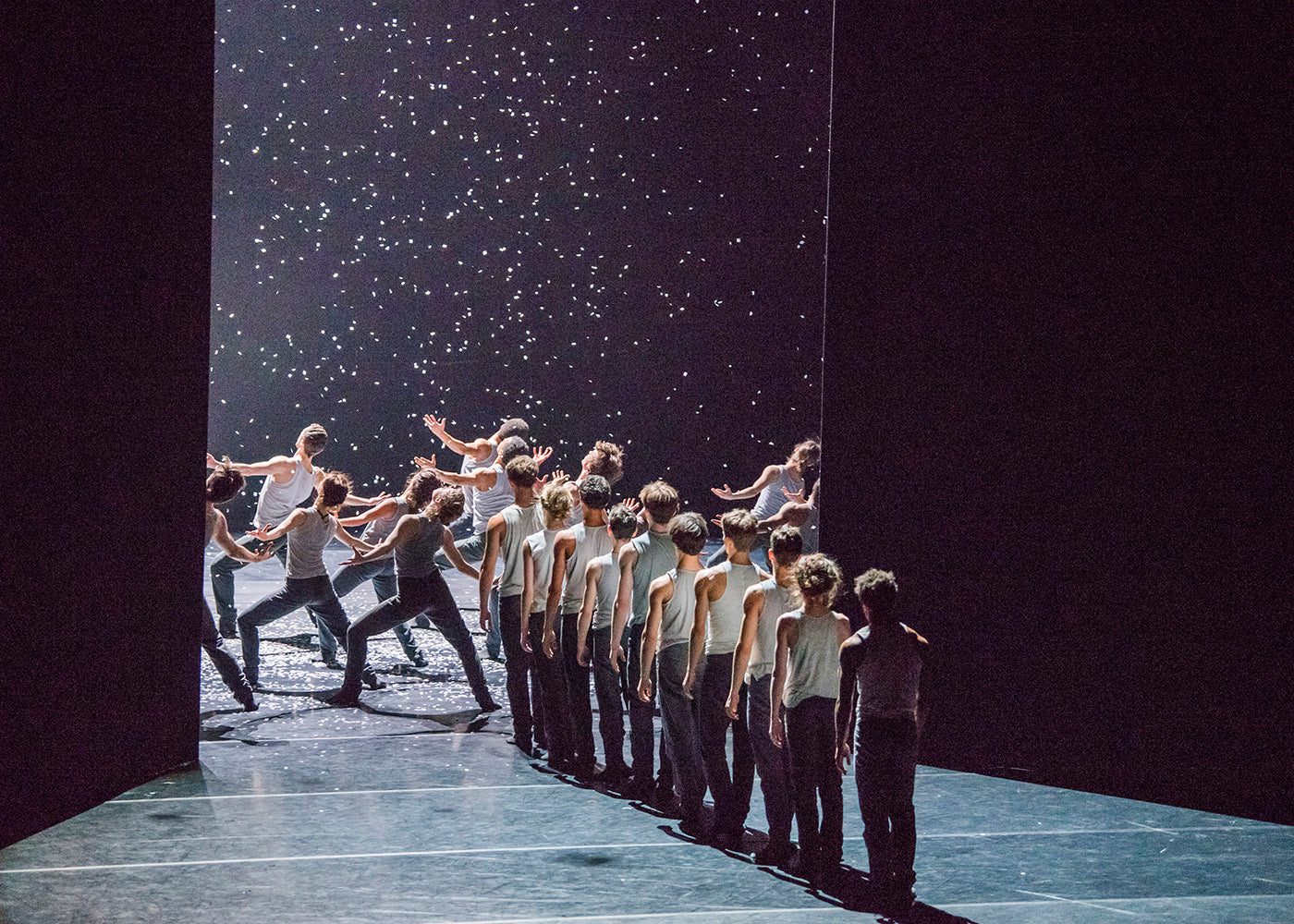 From mimicking the swarming of bees in “Emergence,” to grappling with forces of nature in “The Seasons’ Canon:” Crystal Pite often eagerly looks to complex configurations and omnipotent powers when working with a corps de ballet.

In “Flight Pattern,” her first commissioned work with the Royal Ballet, Pite turns her eye to what she sees as “the story of our time”—the refugee crisis. While the migration of birds is constant and purposeful, the plight of displaced persons across the globe is fraught with uncertainty, peril and persecution. It is this lived experience of displacement that Pite focuses on in this abstract and predominantly emotive piece: there are no evil antagonists, no larger context explaining the journey, only the movement itself.

“Flight Pattern” is performed en masse by 36 dancers; Kristen McNally and Marcelino Sambé are the only recognisable “characters,” often peeling away from the group as the choreography zooms in on their personal tragedy. Opening on a very darkly lit stage, the dancers dressed in drab grey clothing, the group stands compliantly in profile. They shift back, and forth, look side to side, very subtly. They are on, or have become, their own conveyer belt, resigned to some larger unyielding dictate, deadened by a journey made from lack of choice. At times they reach out to support each other, yet at other times, the cruel exigency of their pilgrimage means that one person is left behind unnoticed, lying unresponsive on their front.

There is continuous movement and advancement, but towards what is unclear. Doorways of light appear—are they exits to salvation or do they lead to a grimmer fate? This is particularly poignant in the closing scene, as Sambé hovers and then turns away from a narrowing door that looks into a snowy landscape. We can see the rest of the dancers dashing frantically back and forth through the thin slit: we see and feel their intensity, but their surroundings are obscured.

Pite’s movement language contrasts expansive arcs with sharp, spikey isolations. Impressive though the articulation is, it’s a struggle to pick out something particular to this group of people, apart from a general sense of loss and oppression. At times, there are powerful moments of painterly stillness when the dancers explode outwards from each other but then pause, just at the edge of connection, arms straining to continue cradling backs and heads. As they hold these elongated connections, the audience sees a physical manifestation of the ripples of grief, the shared pain and support of kinship.

With all the dancers dressed in the same nondescript, dusky clothing, Nancy Bryant’s costuming feels closer to Orwellian uniformity than the assorted clothing worn by displaced groups. Tom Visser’s lighting remains dark throughout—as such, the production can feel underlit rather than atmospherically hopeless, though this could be a result of filming a staged work in performance conditions. There is some relief when a warm glow bathes the dancers, and in the crisp dusting of snow at the end. The work is choreographed to music from Henryk Mikolaj Górecki’s Symphony of Sorrowful Songs. Its constancy, while stark, contributes to a certain lack of dramatic tension within the work.

McNally artfully portrays pain and weariness, while Sambé’s final solo injects a sudden shift in pace as he explodes angrily across the stage. Overall, something gets lost in the filming—the group configurations look small and far away, but there are not many up-close, individual moments to dig into.

Pite’s signature is here, but on the whole, “Flight Pattern” feels less exacting than some of her other works, which see her worry away at an idea to sublime brilliance. “Flight Pattern” exists mainly on one emotional level: exhaustion. But in depicting the almost easy reduction of humans to a trudging, indeterminate mass, in choreographing humanity’s capacity for both empathy and callousness when placed in dire situations, Pite nonetheless taps into very current questions of connection, understanding, and culpability.

Next
The Flip Side