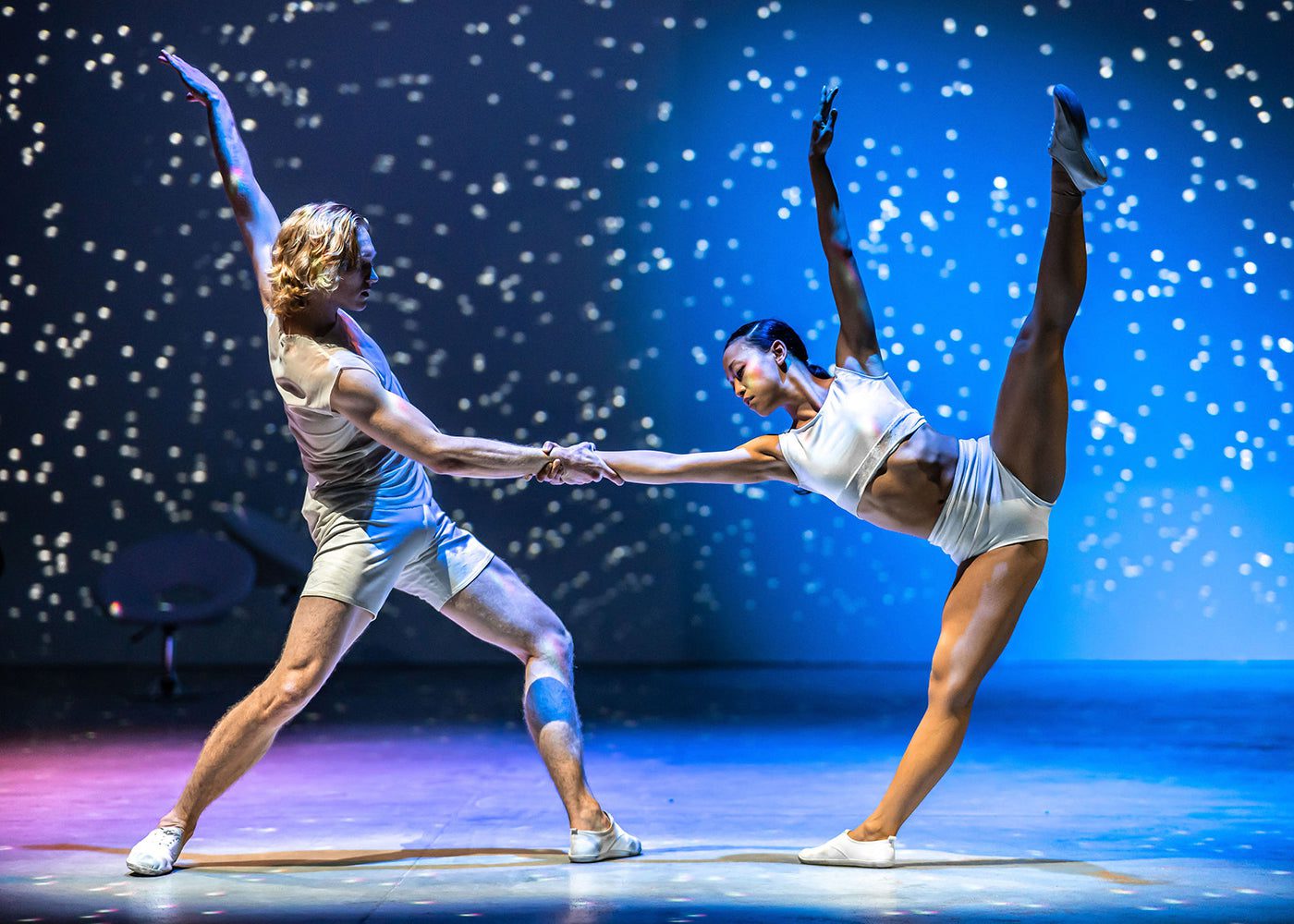 What does dance and the car of the future have in common? In a warehouse of the former Toronto Star printing press, restyled as the Lighthouse Immersive Artspace at the city’s waterfront, the world premiere “Touch” from Côté Danse and Montreal multimedia artist Thomas Payette turns the technology of self-driving vehicles into a vehicle for an experiential multimedia dance installation.

For the less-than-year-old dance collective Côté Danse, founded by National Ballet of Canada artists Guillaume Côté and Etienne Lavigne, “Touch” expands on the artists’ long-time interest in dance on film and sees them boldly push into newer territory with this latest production at the intersection of dance, digital art, and interactive media.

The piece is commissioned by the same presenter of “Immersive Van Gogh,” which sold over three million tickets to its 360-degree projections of the artist’s paintings. Yet, “Touch” is an entirely different show—not the pure spectacle that turned Starry Night into a pixelated video, a hundred times its size. Even if the title does come off as slightly ingenuine in leveraging our current moment—a year when touch became universal nomenclature for a dangerous if not lethal proximity; when we learned to forego handshakes and hugs; exchanged fingertips for elbows— “Touch” delivered with depth and sincerity. Côté’s choreography for the 50-minute live duet complemented by Payette’s projection design, immediately proves to be less about entertainment than it is about probing the darker aspects of the human condition.

Performed on opening night by dancers Natasha Poon Woo and Larkin Miller (with alternate cast Carleen Zouboules and Evan Webb) “Touch” is a non-narrative work expressing phases of longing, fear, and intimacy in a relationship on the rocks.

As the lights go out, the room grows brighter from the cool and empty glare of abstract video projections. Stars encircle the two dancers and audience, weaving us all into a planetary dimension. A non-place. The couple stands facing each other, mirroring their gestures without touching. It’s a deceptively quiet beginning that soon vortexes into a choreography that doesn’t let up: fast-moving turns that are more compulsion than calculation, acrobatic lifts that turn upside down, extremes in staging, and a complex language of hand gestures, all worked to convey the often desperate lengths we go to attain human connection.

Sneakers burnishing the concrete floor, Poon Woo and Miller give a solid performance. They deftly execute Côté’s styled mix of contemporary and balletic movements with athletic command. It was incredible to watch their gravity-defying partnering to an audience on four sides. Around us, fourteen projectors produce a moving backdrop of computer-generated animations: meteor showers, falling sand, rapid-fire montages, and shapes of light. While it promises immersion, I can’t help notice how the streaming images are interrupted by the corner of the room (it somewhat spoils the trick).

Vantage point is a challenge in this lofty industrial space. A friendly pre-show announcement forewarns that our view of the dancers might be obstructed due to the four enormous pillars running down the middle of the room. My unusually luxe swivel chair provides 360-degree rotation, but does little to correct blocked sight lines.

Even so, I like that the choreography attempts to use the entire architecture of the space. One of the pillars becomes a third partner in some of the more complicated lifts and the dancers frequently travel back and forth from the centre to the perimeters of the room. Finding maximum distance from each other in opposite corners, the dancers hold quiet moments apart before returning to each other. It lends expression to that special type of agonizing relationship where you constantly break up and get back together again. Miller might leave us on a high in his soaring grand allegro, but we also see him doubled over under a harsh spotlight, making painfully slow progress across a wall.

The piece is relentless in its emotional trajectory; it doesn’t journey or resolve. Foreheads locked like bulls, Poon Woo and Miller maintain a steel-like antagonism throughout. Arms thrust back and forth to grip throats, a body presses close only so it can tear itself away, and a body violently propels forward into a lift crystallized in fragility and co-dependency.

Beneath the dancers’ feet or on nearby walls, video projections respond to this action in ripples and swirls. Underfoot, it can look like a dimensional spotlight that echoes the dancers’ steps. On walls, a waving hand can set off a smattering of light or an elliptical band that grows and stretches across the room.

Ironically, the projections are not activated by the dancers’ touch at all. That is only an illusion. The effect is created by real-time tracking of the dancers’ bodies by three LiDAR (Light Detection and Ranging) sensors used in dynamic projection mapping of the performance space. It’s the same tech that helps driverless cars respond to objects at a distance (though Tesla maintains that LiDAR is inferior to cameras). Nevertheless, in creative applications like “Touch,” the tech seems to do exactly what it’s supposed to.

In one interactive projection, Poon Woo and Miller stand side by side, triggering a simulacrum of their bodies on the wall. The two projected bodies, filled with a dense geometry of magenta neural networks, sway with the real bodies as if to symbolize connectivity across temporal, geographic, and psychic realms.

Other than this brief moment of hopefulness tinged in purple-pink, “Touch” serves up a cold and empty world. This couldn’t have been more apparent than when a massive light-grid is projected onto the floor, largely reminiscent of ’80s outmoded futurism and the unfulfilled promise of late capitalism. Or when closeups of a face and body in high contrast duotone effect stretches the entire height of the walls.

In this low-fi retro palette, the allure of technology is nostalgic and underplayed. It’s a nice contradiction, given the show uses some of the latest in expensive, intelligent systems. A technological feat—yes. But the interactive bits were largely accessory. As a duet between digital media and performance, the greater feat in “Touch” was that the aura of live dance was never diluted [overshadowed?] by the glow of the future.