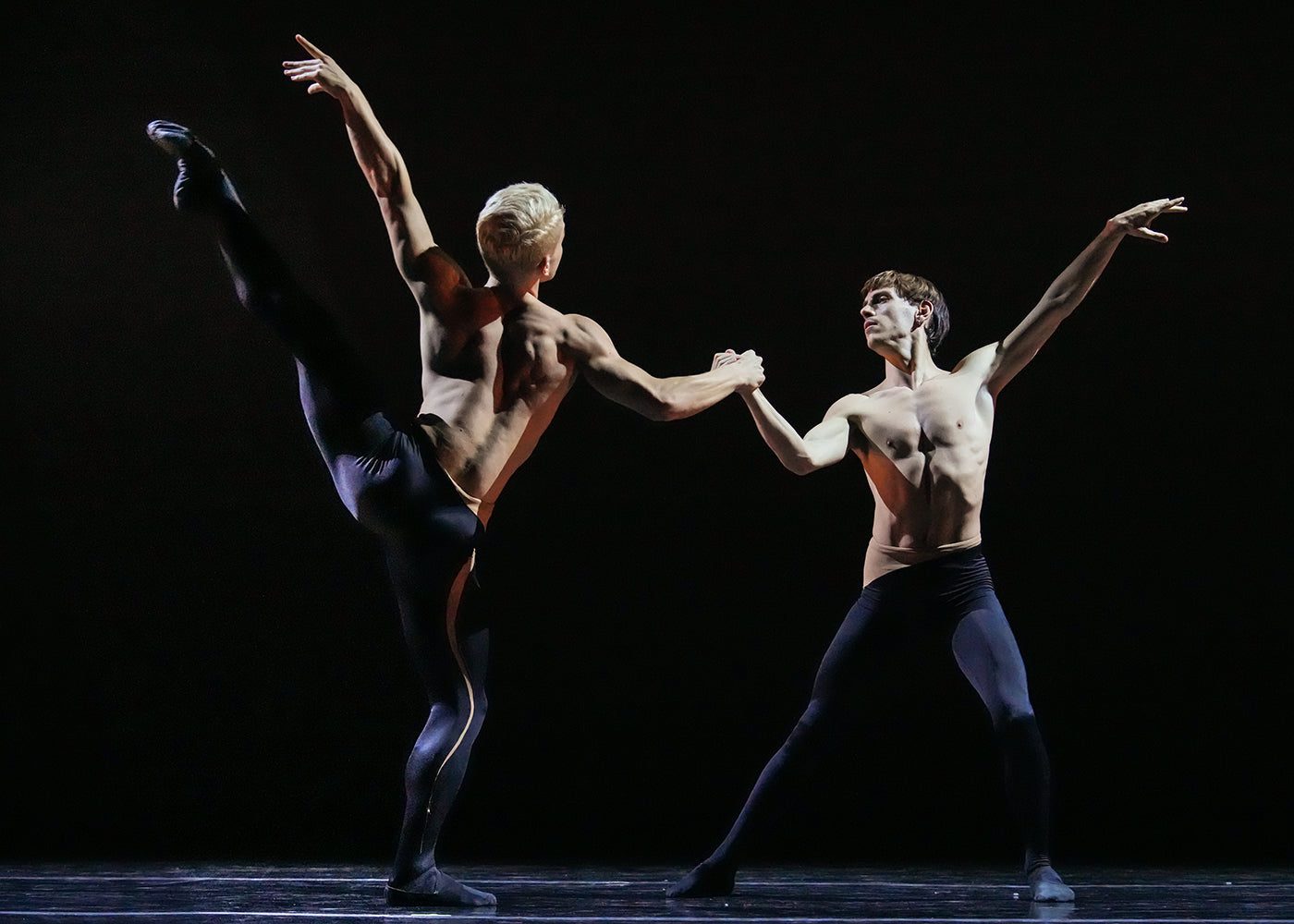 Dwight Rhoden might be the only person in the world who likes a high leg as much as I do, so I have a fondness for his work. Wacked-out extensions are the defining feature of the troupe he co-directs with Desmond Richardson, the Complexions Contemporary Ballet. But aside from this undeviating, extreme pliancy, the Complexions roster is one of the most diverse groups working today in terms of race and gender, and especially size and shape. There’s Jillian Davis, who towers even on flat, at 6’2”, and whose powerful, shapely legs could’ve used a bigger stage. And then there’s Vincenzo Di Primo, a delicate and refined technician whose charisma far surpasses his diminutive stature. This exciting bodily variety is underserved by the repertory, however, which suffers from a sameness in tone, style, and everything else. Program B, which premiered at the Joyce Theater on Tuesday night, consisted of five works by four choreographers, but it felt like one run-on sentence.

This was exacerbated by the fact that the pauses in between the first four pieces were infinitesimal: no sooner had one cast bowed than the next dance had begun. As a result, even the strongest and most distinctive work, William Forsythe’s “Slingerland Duet,” got swept up in the tide. It also didn’t help that the stage and lighting design (by Michael Korsch) was essentially uniform throughout the night: blackness all around with various can light configurations and smoky haze effects. This was a shame, because the flexible and technically assured Complexions dancers appear capable of anything. And Rhoden has innate skill and a good eye for talent. If only they would switch gears now and then.

The show commenced with excerpts from Rhoden’s pandemic-response ballet from 2021: “Snatched Back from the Edges.” It was not the usual Covid box-solo affair, so that was refreshing, but it was also not very different from most Rhoden pieces, so that wasn’t. The program listed other crises covered by the dance, including the “additional challenges of gun violence, racial inequity, and social struggles” as well as “pain, tenacity, and advocacy for change.” That is quite the conceptual umbrella, and the wide-ranging soundtrack by Martin Gore, Gabriels, Shirley Caesar, Terrell Lewis, Tye Tribett, Jon Batiste, Frederic Chopin, Aloe Blacc, Benjamin Clementine, and Sananda Maitreya only added to the diffusion of intent. The dancers were intense and committed, but with so much on the docket, the overall feel was more anodyne than pointed. The next work, “System,” by Francesca Harper, improved upon the opener because its message was clearer. The gifted Tatiana Melendez and Miguel Solano danced to snippets from the ABC News Report of the 1967 Loving Case interspersed with Bach’s Air on a G String. But the look and vocabulary were similar. Like Rhoden, Harper was partial to slides on pointe, penchés rolling through to à la secondes, skimming lifts, partnered pikes, and hoisted embraces.

“Serenity,” a world premiere by former Complexions principal Jae Man Joo, was impressively danced by Thomas Dilley and Di Primo. They were in tight unison for many difficult feats, including multiple pirouettes in nearly every position and even a long relevé balance in the tricky waist-high side range (balancing is easier with sky-high legs). They alternated in solos that demonstrated their differences too, highlighting Dilley’s grounded calmness and Di Primo’s lacy nimbleness. I liked the trompe l’oeil costumes by Christine Darch: spandex tights with blue and nude bands that made the colored areas appear to be painted skin against exposed hipbones. “Serenity” was fine, but it suffered from sharing so much vocabulary with the dances before it, as well as a similar soundtrack of relentless arpeggios, this time by Max Richter.

The company premiere of Forsythe’s “Slingerland Duet” (from 1989) also consisted of many of the same moves and adhered to the cyclical music trend (here, Gavin Bryars’s String Quartet No. 1). But it had a sharper focus, which got me thinking about the faction of George Balanchine disciples that includes Forsythe, Rhoden, Christopher Wheeldon, Ulysses Dove, Wayne MacGregor, and Peter Martins. This group of men, all born in the 1940s-1970s, took the streamlined aesthetics, detachment, and intricate partnering of “Agon” and ran with it, with mixed results. Forsythe and Wheeldon have the best track records, but why? “Slingerland” has some possible answers. In “Slingerland,” the push-pull between classicism and its distortion is constant. Even the woman’s costume, a sleek, turtleneck leotard with one of Forsythe’s paper-thin tutus, reflects this tension. The garment was patterned in a pale pink toile, nodding to ballet’s filigreed history, but the skirt was wavy and see-through, so that it evoked planetary rings as much as imperial grandeur.  In the same vein, the choreography included classical steps like petits battus as well as daring off-balance promenades tracing the floor like a compass. Forsythe juxtaposed hard geometries with fluid grace throughout, while pushing his dancers’ lines past the parameters of the classical zone. Dancers Jillian Davis and Joe González were great at teasing out the drama of the many arm-wrestling partnering motifs while making other moments look easy and unforced. They were by turns melty and definite, struggling and composed. Her far superior height while on pointe also made their coupling freshly compelling.

“Slingerland” worked because more lurked beneath the athletic surface of the dance (in this case, formal experimentation).  Sometimes this second-gen camp focuses on aesthetics or enhanced physicality alone. Those elements were important to Balanchine, of course, but only insofar as they reflected his brilliant musicality. (Wheeldon adheres most closely, and winningly, to the archetype in this regard.) Too often in this genre—with its tendency towards looping, atmospheric, or droning music—the steps seem to exist because they look neat and it’s amazing that the dancers can do them. It doesn’t seem to matter much if the score is by Richter, Chopin, John Adams, Arvo Pärt, or various pop stars. This isn’t bad per se, but it can encroach upon exhibitionism and result in hollowness—especially over the course of an evening. That feeling of emptiness peaks when this style abuts self-seriousness (as in “Snatched Back from the Edges” and a number of Martins ballets: “Guide to Strange Places,” “River of Light,” “Naïve and Sentimental Music,” “Slonimsky’s Earbox”) and ebbs when choreographers embrace the showmanship aspect—or at least wink at it (as in Forsythe’s “In the Middle, Somewhat Elevated,” Dove’s “Red Angels,” and Martins’s “Fearful Symmetries”).  Luckily, Rhoden went all in on the circus vibes in the evening’s world premiere closer: “Endgame/Love One.” Though the work dipped into repetitive vapidity at times (too many duets in spotlights with nothing new to say), for the most part it was a sequin-encrusted celebration anchored by the supreme talents of Di Primo (with strong assists from Davis, Dilley, and Christian Burse).

“Endgame” was like a balletic equivalent of the blockbuster Top Gun: Maverick. The score—with selections by Drake, Post Malone, and Kendrick Lamar—hinted at contemporary issues, but the choreography didn’t engage with them on a deep level. (Like the anonymous Top Gun enemies who never removed their helmets, the same thrashy moves signified every social grievance.) Everything in “Endgame” was coated in a shiny gloss and subservient to the bravura charms of the bankable, Tom Cruise figure at its center. Di Primo, in a tiny, sparkly black vest and glittering fuchsia bell-bottoms (again by Darch), sailed through the showy, hard moves Rhoden teed up for him with panache. The piece really gelled during Måneskin’s cover of Elvis’s “If I Can Dream.” The music, costumes, and steps finally coalesced in support of each other. An Italian glam rock band’s interpretation of a befringed American icon made an apposite soundtrack for a spectacle built around a bedazzled, magnetic, Sicilian ballet whiz. I leapt to my feet with the rest of the audience when Di Primo bowed. I could see “Endgame” running in Vegas. I’d buy a ticket.