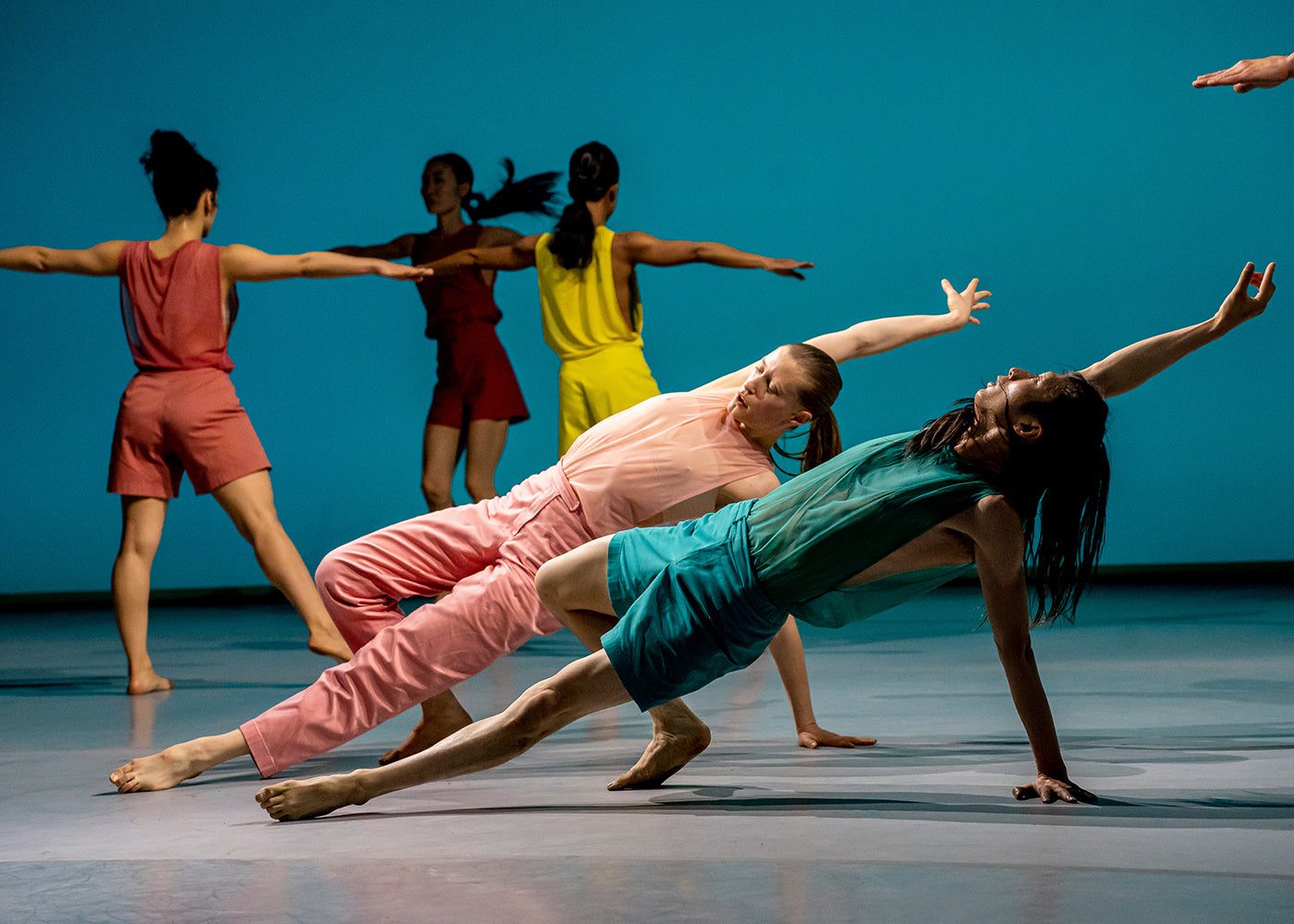 The Collective is Strong

Best of dance downtown in 2022

2022’s abundant, and at times, overwhelming, calendar of dance was a weekly reminder of New York’s place as ‘a’ if not ‘the’ major dance capital of the world. Though the pandemic caused an exodus of artists from the city in search of affordability and space, I was thrilled again and again, by how many have stayed and continued to make powerful work centering their fellow dancers and uplifting their communities. And while there were many singular performances of note—like Jacquelin Harris’s brilliant conjuring of Winnie Mandela in “Survivors” during Alvin Ailey American Dance Theater’s winter season last week—what has stayed with me is the spirit of care for one another that permeated both the creative processes and the performances of a large swath of shows I experienced.

This tender and experimental spirit is not unconnected to the many hurdles dance faces as the industry seeks to rectify entrenched racism, sexism, heterosexism, ableism, fat phobia, and pay inequities. In fact, it was just this breakthrough of intersectionality—the result perhaps of increased collaboration as an antidote to the isolation of the pandemic—that made dance resonate so deeply as a form this year.

Even solo works and evenings created out of personal histories lent themselves to highlighting other artists and charting a path forward, together. Worlds collided in Kyle Marshall’s whirlwind of a solo “I & I” exploring his relationship to his Jamaican body and maternal homeland at Chelsea Factory; canons were formed in the delightful reimagining his disabled body as a classic work of art in Jerron Herman’s “Vitruvian” at Abrons Arts Center; and in “Dichotomous Being: An Evening with Taylor Stanley” at Jacob’s Pillow, layers of dance history and the multitudes of self were peeled back in a stunning restaging of Talley Beatty’s 1948 solo “Mourner’s Bench.” Benjamin Akio Kimitch’s “Tiger Hands” at the Shed, danced by three women, complicated and undermined East/West tropes while honoring Kimitch’s late mother. These works drew on personal terrain and multiplicity but through their dancing, brought a sense of wholeness that defied easy resolution.

Togetherness was an all-out party in some memorable ensemble works: from Ayodele Casel’s “Chasing Magic” to Kyle Abraham’s “An Untitled Love, Lia Rodrigues’ “Encantado,” and LaTasha Barnes’ “The Jazz Continuum.” All offered a place for the individual (and their lineage!) inside of a bumping group dynamic, accompanied by music that had people dancing in their seats and out on the street upon leaving the theater. In Sasha Waltz and Guests/Bang on a Can’s “In C,” at BAM, an ecstatic and colorful game of improvisation bound dancers, musicians, and audience together in the task of deep listening. In Emily Johnson’s ‘Being Future Being,’ at New York Live Arts, the collective action of making and experiencing a dance was inextricably linked to land justice and activism, pushing on the bounds of how much change a performance can generate.

In short, our collective power is as strong as ever.

Which brings me to a new work by the now three-year-old Brooklyn arts group called Tribe. Anchored by the choreography of founder and artistic director Shamel Pitts, this Afrofuturistic arts collective has been making multi-disciplinary dance work with a distinguished group of collaborators while eschewing the traditional dance company model.

This past October saw the world premiere of Pitts’ “Touch of Red” at MASS MoCa, co-presented by Jacob’s Pillow. Following in the wake of his stirring “Black Series” triptych, “Touch of Red” is a new duet for Pitts and Tushrik Fredericks that belongs to a body of work known as the “Red Series.” I intended to write about this event back in the fall, but Covid tore through my family and by the time we had all recovered, the bounty of dance shows in November and December kept me from capturing my thoughts. However, the dance’s use of our culture’s long-held obsession with the sport of boxing to play with the idea of the gladiator as entertainment, all while subverting hyper-masculinity in service of radical vulnerability and connection, had me thinking about this performance long after the evening.

“Touch of Red” begins with a procession of the audience into their seats, on four sides of what looks like a black cube sliced open. Designed by Mimi Lien, this contemporary and minimal nod to the boxing ring was an intimate and beautiful container for the dancers and Lucca Del Carlo’s video mapping and Rus Snelling’s lighting design.

Inside, Pitts and Fredericks warm up to the sounds of a shuddering bass, bouncing with small, subtle grooves. Stools sit empty in opposing corners. Bathed in red light and clothed in red spandex outfits layered with gauzy wrappings and black boots designed by Dion Lee, they could have been fighters shadow boxing before the main event or just as easily, partygoers just getting started at a nightclub. This ambiguous line is a needle the pair continue to thread throughout the ten rounds of the evening-length duet.

When they make their way to one other, instead of jabbing or swiping, they simply reach. Moving through a kind of deconstructed Lindy Hop (thanks to Lindy Hop instructor LaTasha Barnes), they rock around the ring. Del Carlo’s projections cut constellations on the floor and entangle their shadows in an exaggerated moving image. As their swinging steps gain steam, black lines and squiqqles paint over their bodies. Stretching back into a hinge, their lithe bodies hover over the floor in what feels like a nod to martial arts.

The house lights finally dim, and Pitts and Fredericks begin to chart the negative space around each other’s bodies. One leans forward as the other hangs back and it is hard not to wonder about the near kiss implied in the composition of it all. A charged intimacy hangs in the air, floated by an openness to whatever the next escalation might be and the rising tension of the almost. Their arms extend out to the side from the shoulder, their bodies pivot as if against a turnstile. As their movements grow larger to Sivan Jacobovitz’s electronic score, their torsos spiral, arms cutting across and past one another in ever nearer misses.

Ending in a dancing embrace, they are the image of exhausted boxers leaning on one another. Only this hug is not broken up. Instead, the hug pulls them all the way to the floor. Once there, they grapple like two jumbled spiders. Complete with wrestling flips to the ground and the audible sounds of breathing and groaning, their permeable energies are revealed.

For Pitts, who was a dancer with Batsheva Dance Company before starting his choreographic career, there is almost always a sense of total commitment in his body. But for Fredericks, even as he pins and pushes and pulls at Pitts in dominance, there is something softer in his physicality. Like their sweat mixing on the floor, an effeminacy transfers through this scene of roughhousing and dominance, heard in Pitts’ gentle and vulnerable acknowledgment of “okay.”

Later, that word returns in recorded repetitions as Pitts dances his way through an injurious solo, performing bourrées on his knees and scooting on his tail. Projected circles of light literally saw around him as his body exorcises something painful. Fredericks walks the perimeter, arms wide open, as if to say, ‘And what?’ or perhaps, it is also a pleading. Either way for a moment Fredericks takes on the role of the champion while Pitts, curled up in the fetal position, embodies the vanquished.

But all is not lost. And potentially, something new is born of the last fiery scene. With a series of itchy convulsions, Pitts is back on his feet and the pair are pushing each other’s chins up. A mangled hug melts and brings the thought, is this the first truly tender embrace? Fredericks perches atop Pitts’ feet, and their slow dance seems to answer the question in the silence of a private moment. When they part, their hands trail.

The final round is more animalistic than anthropomorphic. In this new territory, they explore on hands and knees, free of the last vestiges of their combativeness. When they return to their opposing corners, it takes a long time for the audience to realize the performance is over. And in fact, it really isn’t.

After applause, Pitts and Fredericks bring their radical vulnerability to the audience as a gesture of thanks. Dragging their stools to sit facing each of the four sections in turn, they quietly express a snippet of what they were feeling while dancing. When they come to my section, Pitts talks of the beauty and inspiration of seeing two dogs playing on the beach. I smile as I revisit all the rounds through that lens.

In its churn of conversions—from violence to care, playfulness to vulnerability, and vulnerability to strength— “Touch of Red” unsettles and nudges us toward the future. Based on this work, the other dances I have mentioned above, and the many, many others that were excellent and for whatever silly reason didn’t fit into the text here, I am hopeful about how dance artists and their collective efforts will continue to push us all in 2023. I await the new year full of gratitude for all the ephemeral mood boosts and perspective shifts 2022’s performances gifted me. Thank you.

Next
The Power of Performance