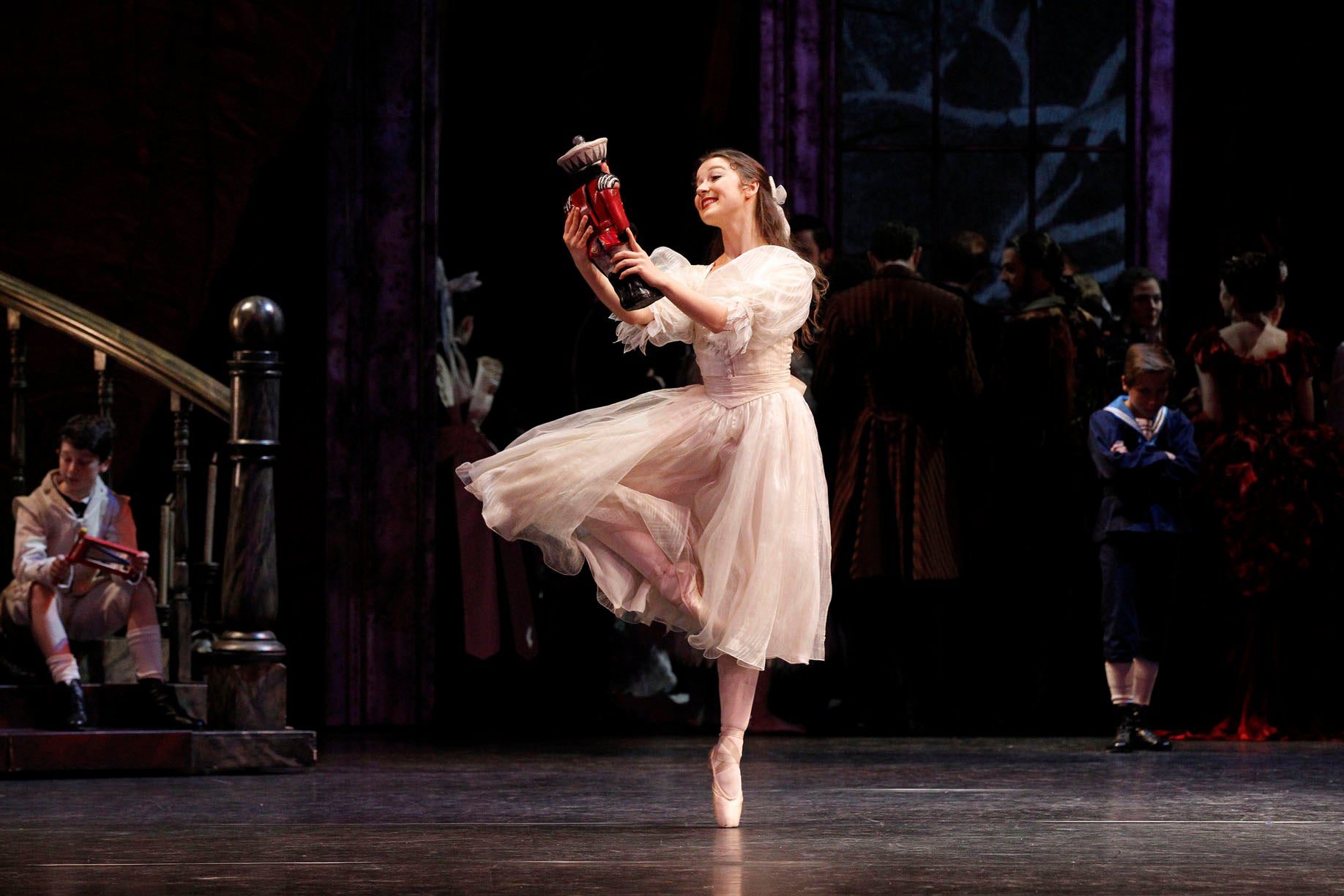 The Australian Ballet's “The Nutcracker”

Flourishing his sword in the air, the Nutcracker cried aloud, “Crack—crack—crack—stupid pack—drive mouse back—stupid pack—crack—crack—mouse—back—crick—crack—stupid pack.”1 In the beginning, in the words of E. T. A. Hoffmann, there was a “hateful” Mouse-King with fourteen eyes and seven heads who gnawed with sharp teeth at the gingerbread and sugar-plums. In the beginning there was a Mouse-King and his ragged army to defeat. A dancing cast, there on the page, their actions written as sounds, ripe for musical translation and, arguably, the makings of a timeless ballet. And though Tchaikovsky when invited to compose the score for “The Nutcracker” found the story to be poorly suited to a ballet, commenting that “these images do not gladden, do not excite inspiration but frighten, horrify and pursue me, waking and sleeping, mocking me with the thought that I shall not cope with them,”2 “The Nutcracker” in its many guises remains a Christmas favourite.

“The Nutcracker’s” roots may be in the ten chapters of Hoffmann’s dark tale replete with the “hideous squeaking” of the mouse army who throw “themselves with fury” and broken glass “clatter—clatter—rattle—rattle,”3 but the choreography draws more from Alexandre Dumas’ 1844 lighter confectionary spin that is today synonymous with all things Nutcracker. A series of pleasurable divertissements has become the focus of our tale from the snap of Spanish chocolate led by Laura Tong, to the bubble of Chinese tea exemplified by Charles Thompson and Rohan Furnell, and the quiet seduction of Robyn Hendricks as Arabian coffee smoothly poured. Delicious treats in excess to make the eyes grow wide and the head spin, Tchaikovsky’s score flies at a dizzying pace, inviting me to relate to or transform into today’s Clara, the ballet student, or Maria of Hoffmann’s original tale: “Ah, how delightful it is here!” cried Maria, entranced in happiness.”4 Mice become rats, Maria becomes Clara, but the invitation to view the world through the eyes of a child once more remains chiefly what this story is about.

Things may have moved from the darker altogether more romantic leanings of Hoffmann to the lightness of Dumas, but it is the spirit of former I look for whenever I attend a performance of “The Nutcracker.” For in Hoffmann’s tale there is not only bite but a terrific sense of contrast between the regulations and stiffness of family life and the freedom of imagination and dreams. The very name that Hoffmann gave to Maria’s family, Stahlbaum, meaning ‘steel tree,’* and the imaginary world which Maria escapes to is one where, by contrast, she is free of all constraint. Hoffmann had her traverse through Candy Meadow and pass through Almond and Raisin Gate, to a world where pavements were inlaid with lozenges and from the fountains poured ”lemonade, mead, and soda-water.”5 Hoffmann believed that music “reveals an unknown kingdom to mankind: a world that has nothing in common with the outward, material world that surrounds it, and in which we leave behind all predetermined conceptual feelings in order to give ourselves up to the inexpressible.”6 He invites us to embrace, delight in, and rediscover a world of the unexpected that along the way may have become lost to us.

Tchaikovsky’s score, though he may have had reservations, retains Hoffmann’s call to liberation and wildness at heart, and so too does Sir Peter Wright’s “The Nutcracker” (1990) when coupled with John F. Macfarlane’s painterly costumes, where the fantastical Snowflakes appear dirtied at the edges and the rat army leap in their pilfered and now-frayed regimental attire. We are presented with a world where Richard House’s Rodent Regent’s very sleeves appear gnawed at, his crown askew, looped over his right ear. The King Rat appears in glorious contrast to the soldiers’ pristine and spotless attire, and the precision of their wooden bodied movements. There may be no swans sporting golden collars as they glide across Rose Lake in Wright’s “Nutcracker” nor golden chariots drawn by silver horses but wonderment is the order of this classic. Wonderment served complete with a soaring goose to transport Clara, played with light-hearted glee by Benedicte Bernet, to the Kingdom of Sweets. Wonderment typified by Madeleine Eastoe’s Sugar Plum Fairy, all lyrical light freedom, with feet rarely seen to touch the ground. Eastoe’s Sugar Plum Fairy sounds like a Celesta (think: Harry Potter’s Hedwig theme) and the Celesta is Eastoe’s Sugar Plum Fairy, tinkling and twinkling in sugar dusting. The two bound together, the heavenly name suits this magical character.

From austere outset, in Wright’s “Nutcracker” things are not all too sweet. There is a sinister edge throughout akin to the frayed sleeves of the rats and the greyed pink tutus of the waltzing Flowers. Luke Marchant’s Jack-in-a-Box has menace in equal proportion to spring, and Christopher Rodgers-Wilson’s Harlequin and his Columbine embodied by Vivienne Wong have an eerie too-real terror to them as they defy gravity. Noted the German writer Heinrich von Kleist, ”these marionettes, like fairies, use the earth only as a point of departure; they return to it only to renew the flight of their limbs with momentary pause.”7 Dreams, and magic come up against the Stahlbaum restrictions and order, and this dichotomy is one Wright serves up beautifully. Act I begins with shades of Ingmar Bergman’s film Fanny and Alexander (1982) not only in look but in feel with its epic fairytale sweep and its “reaffirmation of faith in magic and the unexplainable …. The very first moments of Fanny and Alexander find … our main protagonist, alone in the rooms and corridors of his family’s home. Here, in this richly furnished, inviting place of safety and comfort, Alexander searches in vain for human company while otherwise occupying himself with the idle delights of make-believe and aimless boredom: a miniature puppet theatre that literally raises the curtain on both the story and our little hero …, the sight outside a frost-covered window of furiously colourful flowers on display from merchant stalls, an impersonation of a proud king interrupted by the loud clack! of a rat trap”8 is the Stahlbaum house and Clara’s experience of it to a T.

Harking back to its original source, in Wright’s telling of this familiar tale, it is up to us to determine whether or not our Clara awakens to find all is a dream (as in Dumas) or not. As suggested by Bernet’s Clara, I think she will flit between the two words, the real and the imagined. Accompanied by a dashing and assured Prince in Kevin Jackson this seems all the more likely an option. “After all, [as] Jean Cocteau noted children [have a] superior ability over adults to suspend disbelief and surrender themselves to the strange and mysterious.”9 Indeed, much about “The Nutcracker” has the feel of all being as it should be, and this is quite a feat given that our days are not typically peppered with fairies and petals that dance alongside candies and rats, be they seven-headed or otherwise. That we are able to suspend our disbelief is its great strength. I don’t look to see how Andrew Killian’s commanding Drosselmeyer conjures his magic. I don’t look to see the tiny wires. Just like I don’t look at the artifice of a tree that is really a painted stage prop. To be sweep away by it all feels like the objective to me, or, at least, that is what I seek.

Magical transformation and the power of the imagination lies at the sugar-dusted ever-beating heart of “The Nutcracker” for this is a work that allows us to reacquaint ourselves with the uninhibited rules of the child whilst reveling in the excess of it all. It is a little like drinking too much red cordial and being encouraged to do so. Whether it is George Balanchine’s “The Nutcracker” (1944) for New York City Ballet or the Australian context to a Christmas wonderland provided in “Graeme Murphy’s Nutcracker—The Story of Clara” (1992) that you call to mind, one common golden thread is that of transformation and the invitation to dream. Whether Nijinsky’s curious Sugar Plum solo in the 1911 Ballet Russes two act version of “Swan Lake” or  Wright’s “Nutcracker,” Tchaikovsky’s score is timelessly enchanting, whether you take your dosage of sugar from upon the back a flying goose or surrounded by a menagerie of peacocks, tigers, and bears.

In the words of Hoffmann’s Maria: “Ah, if I could linger here but a while…. Oh, it is too, too charming.”10

* For example, Dumas changed the family name to Silberhaus, translated as ‘Silver Horse.’ He changed Maria (Marie) to Klara (Clara).

Next
The Summit is Blue