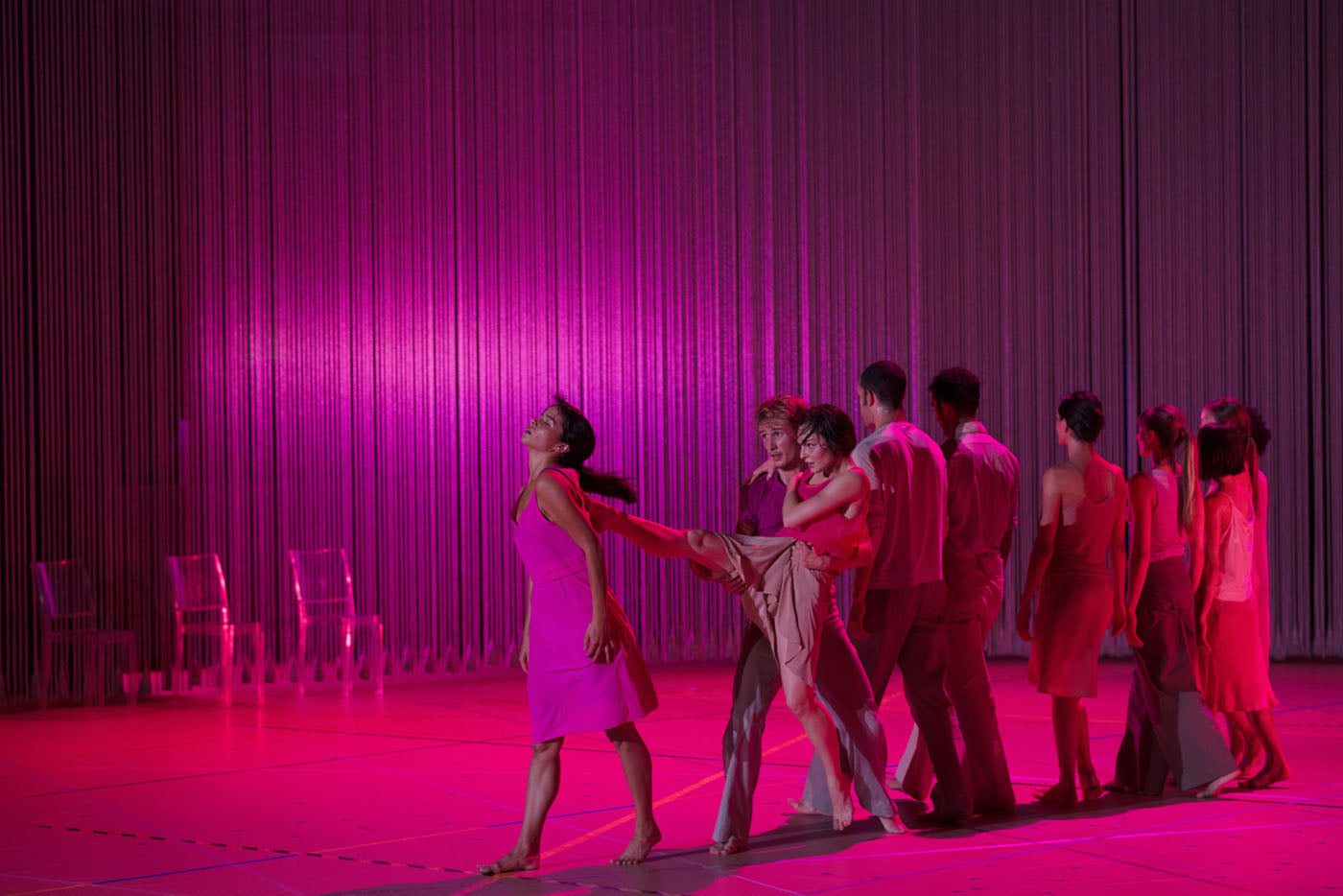 “First and foremost it’s a party.” This is how Belgian choreographer Anne Teresa de Keersmaeker characterises “Rain,” created in 2001 for her troupe Rosas. As far as festivities go, it falls more on the side of relaxed rendezvous than all-night rager, but certainly a feeling of elation defines the work. Over the past 16 years, “Rain” has become a signature feature in the Rosas repertory and part of the wider pantheon of contemporary classics. Crafted not just in sync but in symbiosis with Steve Reich’s minimalist score “Music for 18 Musicians,” it swirls song and dance to form a dreamy churn of leaps, bounds and zippy xylophone chords.

The company is currently touring the work around Europe, with ten new dancers navigating the intricate geometric tangles that illuminate it. These patterns—mosaics and helixes woven across a circular, fringe-ringed stage—aren’t cold calculations but sunny tessellations that evoke joy and even caprice, despite their elaborate composition. They set the performers on a roil of constant movement tided by the surges of the score, played confidently here by the Ictus Ensemble. It’s an easy flow to get swept up in, by turns vigorous and meditative, though the unconventional pacing can leave you feeling unmoored at points.

The atmosphere shifts subtly across the piece, a gradual evolution from buoyant and sanguine to sharp and forceful as the pale neutrals of the lighting and costumes are swapped out for vivid chromatics. An early male trio boasts jaunty slides and gymnastic tumbles, while a frothy female phrase bubbles over with tilts and flicking feet. As the strings in the score pick up, so do the dancers’ dashing and darting, their leaps sharpening, and the piece concludes with the group marching en masse in an insouciant sashay. Léa Dubois looks especially luminous, her every spin and reach pulsing, and Frank Gizycki too stands out for his effervescence as well as his adroit linearity.

The group dynamic is impressive, lifted by a deeply felt, collective energy. While the unison phrases are loose and fluid, softening the linearity of the choreography, the dancers bring a snappy, reactive quality to the partnerwork, as if they’re atoms in constant collision and retraction. In these latter sections, they look particularly nimble, poised but never rigid as they pursue Keersmaeker’s tricky configurations. The ebb and flow occasionally loses its organic edge, slipping to reveal the some constrained efforts and less-than-tidy transitions, but for the most part free spirits reign.

Next
A Sense of Style