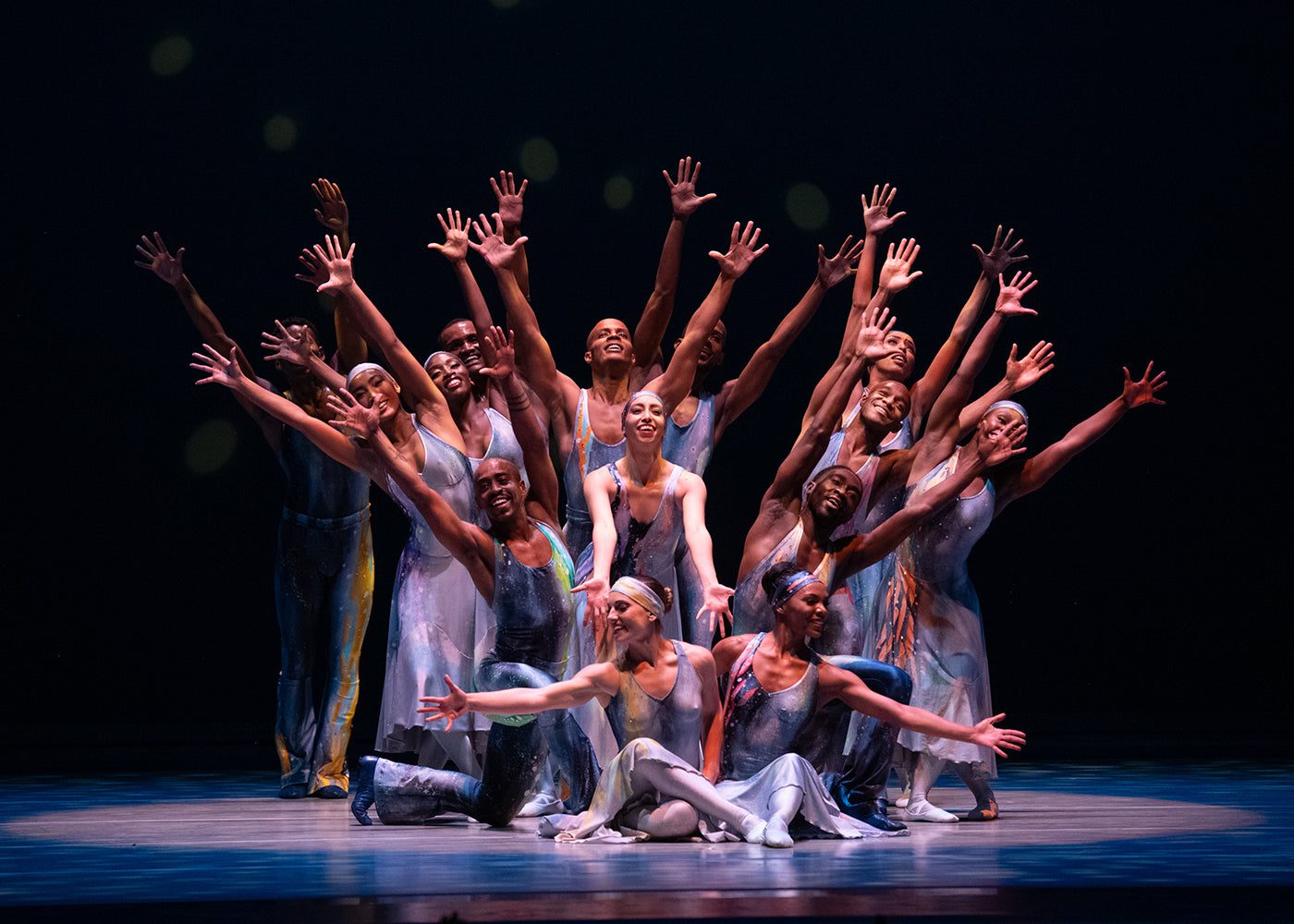 You know something is up when, on the Friday night the last weekend before Christmas, “Revelations” is not the peak of an Alvin Ailey American Dance Theater performance at City Center. This was not the fault of “Revelations,” which still galvanized the sold-out crowd. But it couldn’t hold a candle to the opener: Ailey’s “Night Creature,” which was brilliantly led by Sarah Daley-Perdomo and danced in front of the Future of Jazz Orchestra, curated by Jazz at Lincoln Center. Throughout the first half of the evening, the pairing of the live band with some of Ailey’s best pieces to Duke Ellington made for a momentous occasion. It felt like a gala; the ever-chummy Artistic Director Robert Battle even appeared at a podium for pre-show introductions—naturally, he started his speech by doing jazz hands. Battle’s own “For Four” also got the live-music treatment, and it was about a thousand times better with its Wynton Marsalis score played onstage too.

One could make the case that Ailey’s “Pas de Duke” was the high point. I would happily have that debate over a glass of wine. It doesn’t get much better than Jacquelin Harris and Chalvar Monteiro duking it out to Ellington classics while wearing denim tuxedos made of black and white satin (by Rouben Ter-Arutunian). Ailey created this competition pas for Judith Jamison and Mikhail Baryshnikov in 1976, but Harris and Monteiro are nothing like the original pair, so they had absolute freedom to make it their own. Where Jamison towered over Baryshnikov with her 5’10” frame, Harris is a petite dynamo, so she relied on her amazing control and sprightly jumps. Monteiro has long lines and high extensions, so his exquisite balances in arabesque were the highlight. Both Harris and Monteiro have some of the best coupés jetés en tournant in town, so they were evenly matched at the finish line. They are both wonderfully present performers too, and, with the live band behind them, they made the entire piece feel like improv—particularly when backed by the excellent Joe Block on piano. “Pas de Duke” closed out the live music portion of the show, and I wondered how “Revelations”—with canned music—could ever hold up. “Pas de Duke” was even seasonal, with the “lovely weather for a sleigh ride together” melody floating through the coda.

But “Revelations” is the AADT’s signature closer for a reason. The moment the choral humming of the traditional “I Been ‘Buked” began, with the curtain still down, it began to cast its spell. That humming has become as Christmassy to me as the “Nutcracker” overture. And like the “Nut,” you can quibble with casting, but both pieces will work their magic regardless of who is dancing. So, what of the casting? I was thrilled to see Ghrai DeVore-Stokes in the “Fix Me, Jesus” pas de deux, alongside the elegant Jermaine Terry. DeVore-Stokes is a chameleonic dancer, which she proved again in “Revelations.” She looked haunted and humble in the pas, but she gave good stank face and danced with sass in the “Rocka My Soul” finale. The “Fix Me” choreography is endlessly compelling, with its perfect depiction of two people on separate paths who come together to support each other in moments of need, and DeVore-Stokes and Terry were very moving in it. Renaldo Maurice was another standout, with his awesome freak out at the end of the “Wade in the Water” section. And Khalia Campbell was a goddess with an umbrella in the same number as well as a star of the finale.

Vernard J. Gilmore was lovely in the “I Wanna Be Ready” solo, but as he’d already danced Ailey’s meditative “Reflections in D” solo with the live band, it felt redundant. This is not to take away from Gilmore, whose port de bras is wondrously pure. He reminds me of former NYCB principal Peter Boal: nothing is extraneous to his line, not a fingernail. When he repeatedly lifted his hands to meet in the high 5th position in “Reflections in D,” it was powerful. But for variety’s sake, I’d have liked to have seen James Gilmer in the “Revelations” solo. His stellar turn in Jamar Roberts’s “Morani/Mungu (Black Warrior/Black God)” during the Fall for Dance Festival proved he’s ready. But Gilmer made his commanding presence known in “Sinner Man” and elsewhere in “Revelations,” and also in “Night Creature.” Samantha Figgins, likewise, was beautiful in everything she danced. I’ll also single out Christopher R. Wilson, who made his moments in “Night Creature” count.

“Night Creature,” was a knockout all around. With its glittery, ice-blue costumes (by Jane Greenwood, fabric dyed by Elissa Tatigikis Iberti) and sultry moves, it was like sitting by a fire during a snowstorm. The choreography featured the cast in a canon of shoulder-shaking on the diagonal, and in a wedge doing hip rolls and pas de chats in unison, making it like the Radio City Rockettes and the “Nutcracker” Snow Scene rolled into one. Throughout “Night Creature,” Ailey used classroom jazz and ballet steps, as when Patrick Coker and a quartet of women performed a long petit allegro combination of temps de cuisses, glissades assemblés, and ballottés. Several transitional sections featured the whole company doing grand allegro passes across the floor, as in a lesson, or running fish lifts. But the squareness of the classroom vocabulary hit up against Ellington’s syncopations in a magnificent way, especially in the hands of the Future of Jazz Orchestra and the spectacular Daley-Perdomo. You either have it or you don’t, as they say, and boy did she have it. Oh, and there were T-Rex arms. Lots and lots of T-Rex arms.

December in NYC is overstuffed with festive, annual offerings. There’s “The Magic Flute” at the Met Opera, “A Christmas Carol” on Broadway, the Holiday Lights at the Bronx Zoo, the Train Show at the Botanical Garden, the Rockettes, Dorrance Dance and the Trocks at the Joyce, and umpteen “Nutcrackers” and Handel “Messiahs” around town. It’s hard to choose what to see, and nobody can see it all. The AADT’s annual run at City Center is always a good bet, and something I never miss if I can help it, but the addition of the live jazz orchestra should move it to the top of everyone’s list. If they could get the live chorus to sing for “Revelations” too, as they have in the past, they could probably corner the holiday market.