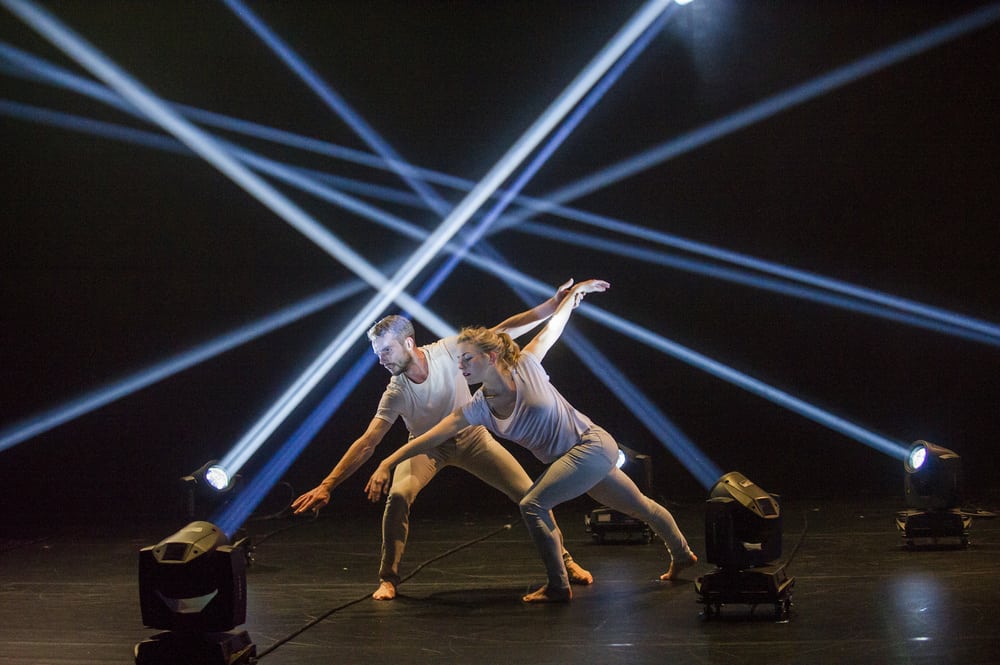 This performance of Alexander Whitley’s “Pattern Recognition,” which premiered at London’s Platform Theatre in April, was the kick-off to a five-leg autumn tour around the UK. The London-based choreographer has teamed up with digital designer Memo Akten to create a 50-minute contemporary work that uses motion-responsive technology to explore themes of consciousness, memory and fragmentation in the digital age. The technology comes in the form of eight chunky floor lamps that sense and track the dancers’ movements, responding with their own illuminated patterns. The lights, the programme makes clear, “are not pre-programmed but are driven only by the movement of the dancers.”

The work is a duet, here starring the excellent David Ledger and Julia Sanz Fernández, though it’s perhaps more apt to call it a trio since the lighting quickly emerges as a player in its own right, strobing and flickering in sync with the dancers, who frequently rearrange the lamps’ positioning and on a few occasions step aside so the technology’s ‘performance’ can take centre stage. The lights even take a bow at the end, demurely casting their bulbs downwards following the dancers’ own bow.

It’s an engaging effect, helped along enormously by Whitley’s elegant choreography and the excellent chemistry of the dancers. Ledger and Sans Fernández know each other’s bodies and rhythms well, and navigated the intimacies of the choreography—tight embraces, slinky leans and twirls—with aplomb and commitment, their interactions purposeful and impassioned but not overly earnest.

The opening is fast-paced and fleet-footed, the pair flinging, crawling, sliding, clinging, their partnering complementary rather than supportive—a grasp of an arm here, entwined hands there. The lights here chime in with rapid-fire flashes, blitzing short-lived shadows across three scrims. Later sequences are slower and steadier, the industrial score decelerating and the partnerwork graduating into intricate tangles of coiled postures and limbs. One phrase sees the pair slink in silence, scored only by the mechanical whir of the swivelling lamps; in another they glide amid a forest of vertical beams. A snake-like motif recurs frequently: slithering floorwork, sensuous body rolls, an undulating move from Ledger that’s best described as ‘the worm upside down’.

While the movement and lighting produce a neat dialogue, though, I’m not convinced the ideas they aim to communicate fully emerge, particularly the concept of “a fragmented world of recollection.” And structurally speaking, the work feels a little bottom-heavy. What feels like a natural ending—a lovely iteration of the opening phrase, this time softer, with slower lights that let us indulge in the shadows cast instead of trying to catch them as they flicker—is drawn out with a lengthy series of solos that have their moments but don’t quite flow as a whole.

Still, the work’s reflective timbre is a pleasure to take in, as is the unexpected sweetness of the lamps’ wheeling and whirling, which at times recall the inquisitive swivels of Disney’s WALL-E or Star Wars’ BB-8. I’d love to see the piece fleshed out in the future, perhaps with more dancers—its foundation is strong, and its innovative technology clearly lends itself to some intriguing artistic applications.