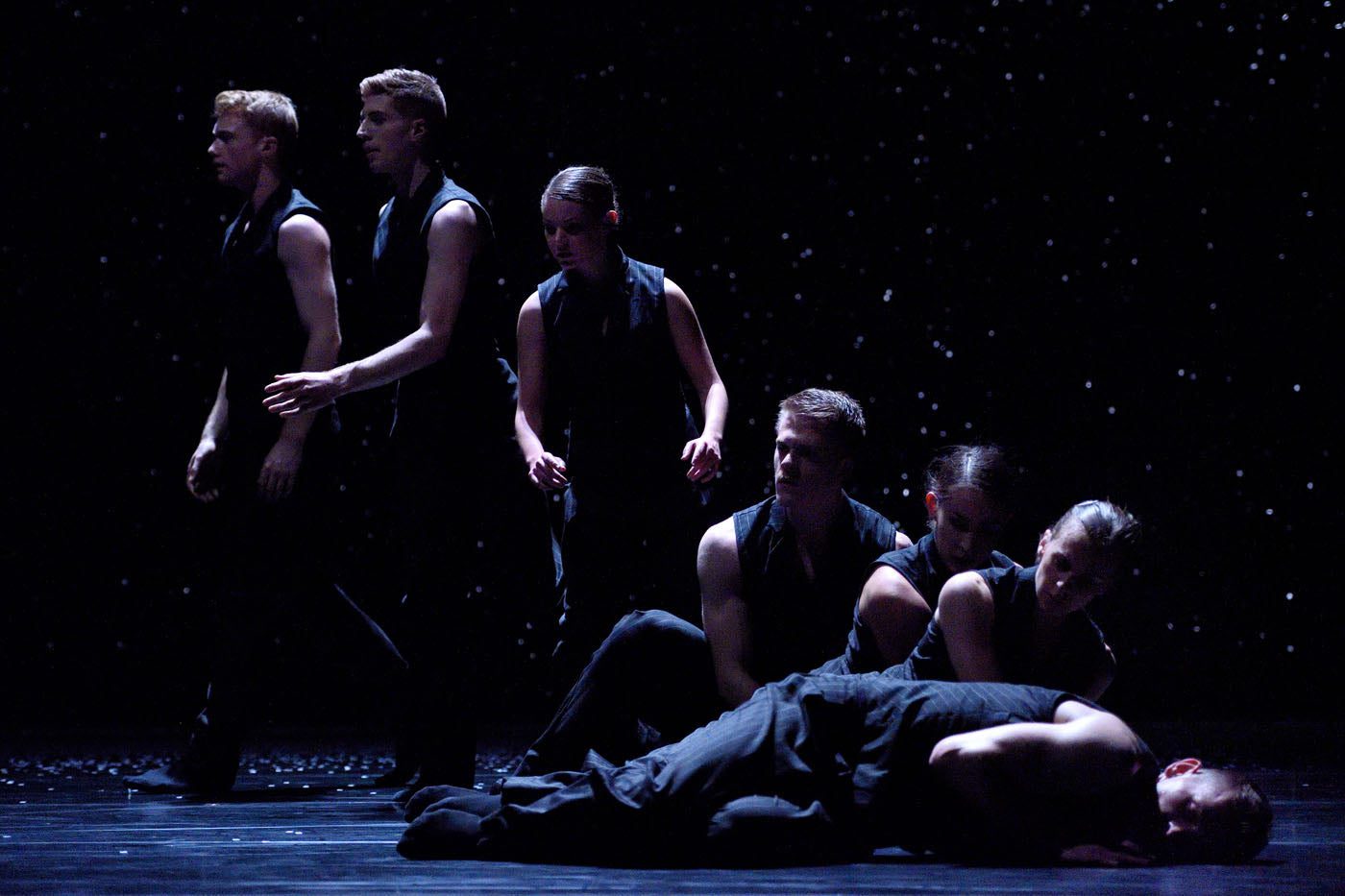 Ballet BC tours to London

In the ballet world, female choreographers remain, unfortunately and infuriatingly, the exception rather than the norm. Ballet British Columbia artistic director Emily Molnar shines a spotlight on this imbalance with a new bill of ballets from Crystal Pite, Sharon Eyal and herself—a welcome redress to a centuries-old deficit, made even more so by its cool absence of progressive intent. The programme champions women not by specifying feminist themes but by simply making space for female dancemakers to present their choreography—a resounding statement in itself.

The three works call on the robust talents of Ballet BC’s company, a 16-strong collective that skews young and takes in a heartening array of bearings and frames. Individual personalities are best showcased in Eyal’s “Bill,” created with long-time collaborator Gai Behar for Batsheva Dance Company. The jaunty, jiggly piece plaits eccentric solos and ensemble phrases, tiding a wave of gender-bending sashays and android sways. An early male soloist evokes the puckish air of a faun; another motors along tautly, a perky C-3PO who busts out the occasional harlequin toe-touch. Elsewhere we’re treated to crouching strongmen, squirmy gaggles of limbs, Etruscan paintings come to life. Aided by the throbbing notes of a bespoke score by Ori Lichtik, the vibe is roguish, knowingly silly, the dancers in on the joke and inviting us to be part of it as well.

This wink fades somewhat in the rhythmic finale, which sees the 18 dancers split into cohorts, a small group rocking at the front while the others perform a mechanical samba behind them, a long-winded chorus that starts out as entrancing but ends up a tad monotonous.

By contrast, there’s nary a trace of tedium in Crystal Pite’s “Solo Echo,” which opens with a luscious cascade of snow, a lone dancer dispensing heavy swivels and ricochets. From here, six others join for a poetic promenade to two Brahms sonatas. The work—originally created for Nederlands Dans Theater—animates the melancholy verse of Mark Strand’s 1978 poem “Lines for Winter,” pondering its themes of grief and perseverance with insightful, searching choreography that matches waving torsos with furious lifts and falls.

The dancers establish a superb communion, epitomised when they link arms to rescue a fallen comrade; later they line up to form a creaturely spine, their arms grasping and legs sliding in a searing image of restlessness. Ricochets, staggers and interruptions are central to the movement vocabulary, the cast trudging against an agitation that never lets up. It takes a dynamic choreographer to wrangle the chaos of anxiety into something elegant, meditative, and Pite—a Ballet BC alum herself and one of today’s sharpest choreographers—proves well up to the challenge.

Rounding off the bill is Molnar’s “16+ a room,” which uses writing from Jeanette Winterson, Virginia Woolf and Emily Dickinson as a springboard for reflecting on the elusive properties of time. Signs crop up to unmoor the linearity with declarations that “This is a beginning” or “This is not the end,” but more effective is the syncopated choreography, which ambitiously twists the tempo of Dirk P. Haubrich’s electronic score, the 13 dancers suspending balances well past their allotted eight-count, then cantering to catch up. Haubrich’s capricious electro twizzles and winding synth further warp the continuum, offering little in the way of pacing.

The movement itself, with its dynamo extensions and prowling struts, recalls William Forsythe and other late 20th-century powerhouses. It’s a good look on the company, most of whom chase the slides and whacks with admirable sleekness, though a few struggle to fully articulate their pointework in the fiddlier moments.

These three works, with their distinct moods and stylish energy, amount to a bill that speaks to Molnar’s self-professed desire to “introduce audiences to various voices and a diversity of styles” and “create more of a definition of what it means to be contemporary with the legacy of training in ballet.” The London show was the inaugural performance of a six-city tour around the UK—the Canadian troupe’s first sojourn this side of the pond and hopefully not its last.