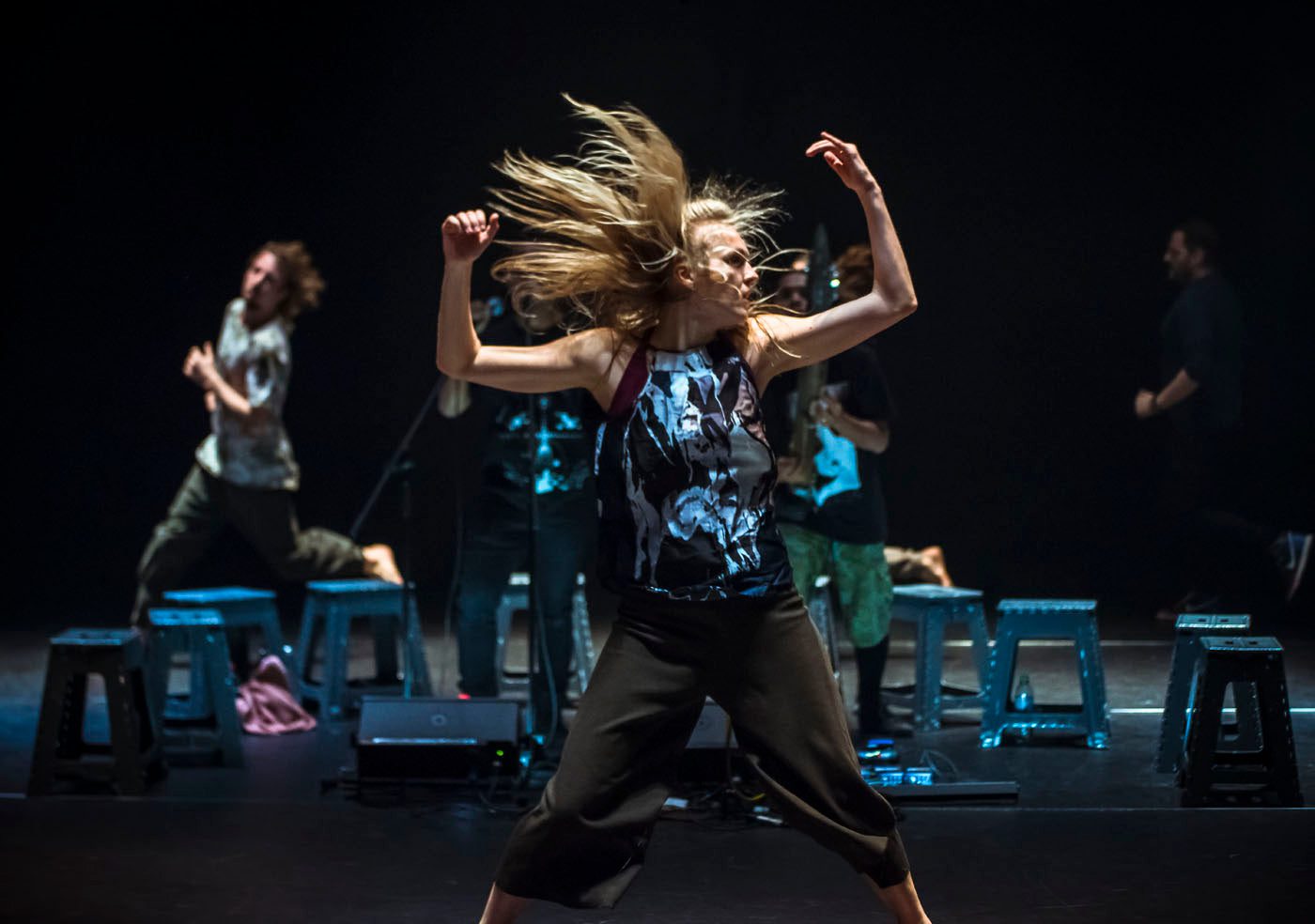 Arthur Janov, the recently deceased nonagenarian psychologist who developed primal scream therapy, would, no doubt, have felt right at home experiencing “Attractor,” a ritualistic, twerky-jerky rave directed and choreographed by Lucy Guerin and Gideon Obarzanek. Oh, and the unhinged neo-apocalyptic score, performed live by Indonesian duo, Senyawa (vocalist Rully Shabara and Wukir Suryadi on electrified “Bamboo Spear” and other instruments), was itself a gut-punching primal scream of, well, Mozartean proportions.

In other words: This work was one for the ages—or at least our current age—where rage, fear and uncertainty rule. Happily, in this case, there was also a collective sense (and sigh) of release/relief at the end of the opus. The call-and-response motifs between the eight dancers and two musicians had reached fever pitch when 20 unrehearsed volunteer movers (pre-chosen), rose from their seats and strode onstage, joining the choreographed mayhem during the last 15 minutes of the nearly hour-long work.

This brilliant ploy, a coming together of humanity—back-and-forth rockings, joining arms in a Hora-like dance and rhythmic clapping—embodied a spirit of unity and trust. (The novices had been given short briefings and tiny earpieces, and were talked through the show by participant/rehearsal director Amber Haines.) And while the ending proved supremely satisfying, what came before was also transgressive as well as transcendent.

Both Australians, Guerin established Lucy Guerin Inc in 2002, and Gideon Obarzanek, who founded Chunky Move in 1995 and co-curated the inaugural Asian Pacific Triennial of Performing Arts (Asia TOPA) in 2015, make for ideal choreographic bedfellows, with “Attractor” having bowed at this year’s Triennial.

And while, according to the press notes, Senyawa “reinterprets the Javanese tradition of entering trance through dance and music,” their powerful, head-banging fortissimo riffs, influenced by Black Sabbath, Metallica and Iron Maiden, with this viewer reminded, at times, of the Grateful Dead’s late Jerry Garcia—on steroids—took their ear-shattering sonic landscape to new highs. Indeed, these Indonesians are a far cry from Yo-Yo Ma and pals’ Silk Road Ensemble.

Which was a perfect complement to the controlled frenzied of the dancers. From wielding Shiva-like arms and executing hyper-fluid lunges, the clad-in-street clothes performers (costumes by Harriet Oxley), led by the fierce Samantha Hines and a take-no-prisoners Kyle Page (Dancenorth’s artistic director), also quivered, tumbled and hip-swayed at times as if participating in an exorcism. These trance-dance tableaux were heightened, as well, by Ben Bosco Shaw’s Rembrandt-esque lighting (realized by Samuel Doyle).

Hallucinatory, the rampant unisons were punctuated by repetition, whether slo-mo crawling, hail-Mary arm-flailing or hair-tossing. With Shabara’s eerie, often gutterally operatic vocalizing piling on top of Suryadi’s manic thrummings, the ambient feeling veered from New Year’s Eve revelry to Frankensteinish. Whether the dancers were feeling trapped or jubilant was not at issue, and though pairings occasionally resembled a Worldwide Wrestling meet, replete with faux sparring and ultra-loose limbs, the amped-up notion of the body as cipher was nevertheless a triumphant one.

On another level, the work was reminiscent, if ever so slightly, of Jiří Kylián’s iconic “Stamping Ground,” with Georgia Rudd’s spins, leaps and jumping in place having an aboriginal bent. At one point, when the musicians were literally dragged on the floor and then carried around the stage, funereally—and Suryadi having relinquished his strings for a recorder, Shabara his raw, raga-inspired wailings recalling a shamanic deity, the dancers, in spasmodic mode—never missed a beat.

Metaphoric pinballs jostled about in a machine on perpetual tilt, these performers, including Jenni Large, Ashley McLellan, Mason Kelly, Jack Ziesing and Felix Sampson, gave new meaning to the word kinetic. There were, of course, moments of calm (few and far between, however, and mostly on the floor), and some necessary silence, building to that climax of moving bodies in corporeal conversations—trained, untrained, leashed, unleashed—at last uniting in unbroken circles and finally, facing front.

This was, in every sense, artistic fortification for the 21st century.

Next
The Stars Align