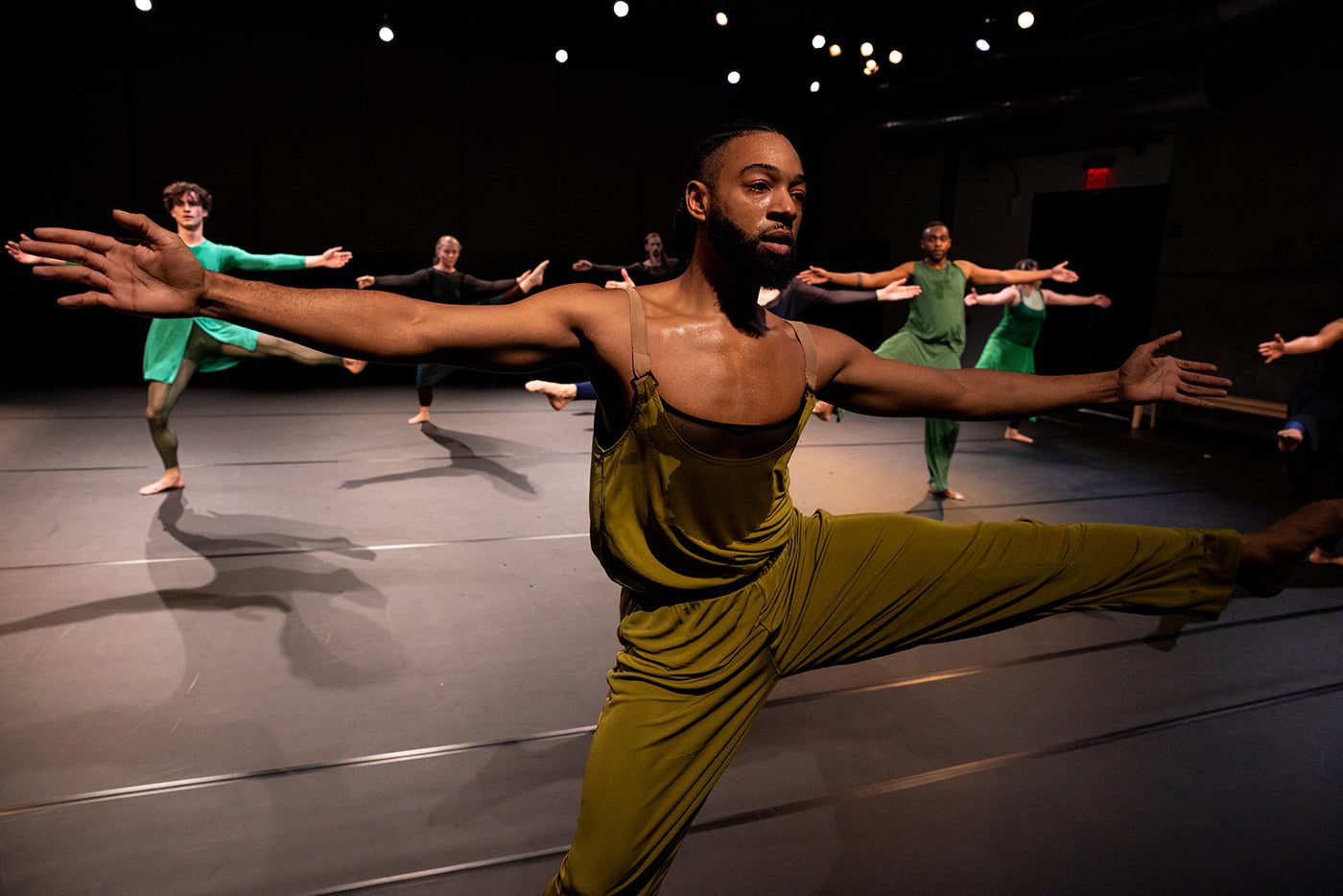 Evoking its title, Tere O’Connor’s “Rivulets” trickled through a series of dreamy episodes where movement, music, and gathering collided with a quieter sense of interiority. The world premiere at Baryshnikov Arts Center on Wednesday evening was an unfussy affair, staged in a studio with a light grid and a few rows of seating on either side of the floor. Without a discernible plot or recognizable story, the dancers communicated with one another in streams of expressive and at times, exhausting, choreography (to which they received collaborative credit).

Two long braids of dancers flow out on the floor from where Leslie Cuyjet and Tess Dworman perch on a bench in front of ballet barres. In the dawn of a single light, it is a gorgeous opening tableau. Cascading voices call out in high and low registers as they stir; the clinking of loose change fully awakens the group, encouraging them to spread out across the floor. A techno beat makes a few interruptions as they find their way, setting the tone for O’Connor’s transporting musical score that moves constantly between a broad range of sound, in direct conversation with his eclectic and balletic movement vocabulary.

A promenade propels Mac Twining into a liquid solo whose outward swoops flow from an inward spiral. An embrace precedes the group splitting apart into two lines facing in toward the dancing space. Emma Judkins walks a broad figure eight pattern, and they watch her example before joining in. When they do, their steps trace pools and eddies in a delightful mosaic. Each dancer’s tract eventually winds tighter and smaller, their arms thrusting out to initiate a shift in direction, bringing the group into a close huddle. To the sounds of classical piano music, they paddle the air, each with their own gestural language.

O’Connor has been making work for forty years that resists easy interpretation. His stated interests in time, memory, and consciousness layer his dances with references that are amorphous and flexible. Like Lao Tzu in the Tao Te Ching, O’Connor’s choreography in “Rivulets” seems to be buoyed by the many virtues of water, its ability to cut a path and find a way. Patterns emerge only to evolve, adapt, and move on; motifs return like waves. Often it is clear who or what is leading the group into a new section of movement—as when when Judkins originates the figure eight for the others to try out, or later, when Cuyjet summons the other dancers with a commanding high fifth port de bras. Other times, it is more mysterious, with shifts bubbling up from an unknown source.

In a sort of free-flowing conversation between eight people, non-unison dancing was carefully crafted to intersect with unison movement in what felt like casual, fortuitous moments of alignment. Duets and trios rolled out of ensemble sections, while solos tended to invite everyone to coalesce again. Moods shifted along with the group dynamics, quick and without getting caught up in any drama of meaning.

A trio moves across the floor like a roving whirlpool, and Jessie Young, Jordan Demetrius Lloyd, and Wendell Gray II reach, pull, and thrust to a section of string instruments. They meet up in smooth arabesque turns before Young’s sharp kicks toss them back into individual, yet connected, movement phrases. Later, a duet with Lloyd and Gray II shows off a softer side as the two men ripple their arms in a simple offering. As their small explorations of touch grow into larger movements and partnering, a tender attentiveness remains in their gaze at one another. Their vulnerable rapport gives way to a more humorous gathering of women, ambling about with wide walks, that eventually grows into a convivial assembly of all. Grasping hands and walking past one another, their circular weaving resembles a maypole dance. At intervals, they lunge into the center, making one large constellation of interlinked arms.

Sitting to one side of dancers playing on multiple fronts, the staging often offered a profile view. The sense of peering through the action created a necessary intimacy for me to engage with this work, which was as much ephemeral form and cerebral poetry as it was practiced patience and more tangible care. And while the organization and dissolution of the group sections captivated, the solos were not without intrigue. They seemed to act as natural palette cleansers and yet, more than a few contained a great deal of virtuosity and personality.

In an adagio solo that I struggle to fully see, Jordan Morley’s lithe body stretches time.  Cuyjet charts a choppier course, tossing her arms in windmill motions, swims, and swings; a welcome break in O’Connor’s score gifts us the silence to appreciate the rhythms of her pounding feet. After a mob of glissades, Lloyd pushes the bounds of the space with the forever reach of his extensions. Following a duet with Cuyjet in which the pair eye the horizon like two hungry explorers, Dworman intensifies their gestural language in a frenetic and stirring solo. The others return and lay her to rest on the floor.

In this moment a question grabs me: is there a story threaded through these vignettes that I have been too dense to intuit? But in the next breath I simply let the thought go, and it is easily absorbed into the playfulness of a pas de cheval game, the ecstasy of sharply convulsing spines, and the sweat beading up on bodies, saturating the flowing layers of Reid Bartelme’s green and blue costumes as they churn through a petit allegro. The jumping melts into sways that tilt the dancers side to side; the swaying is shrugged off for pivot turns that move them in and out. A blackout eats the moving image of their overlapping lines. The sound of three notes in the darkness drops us out, a denouement revealing none of its secrets.