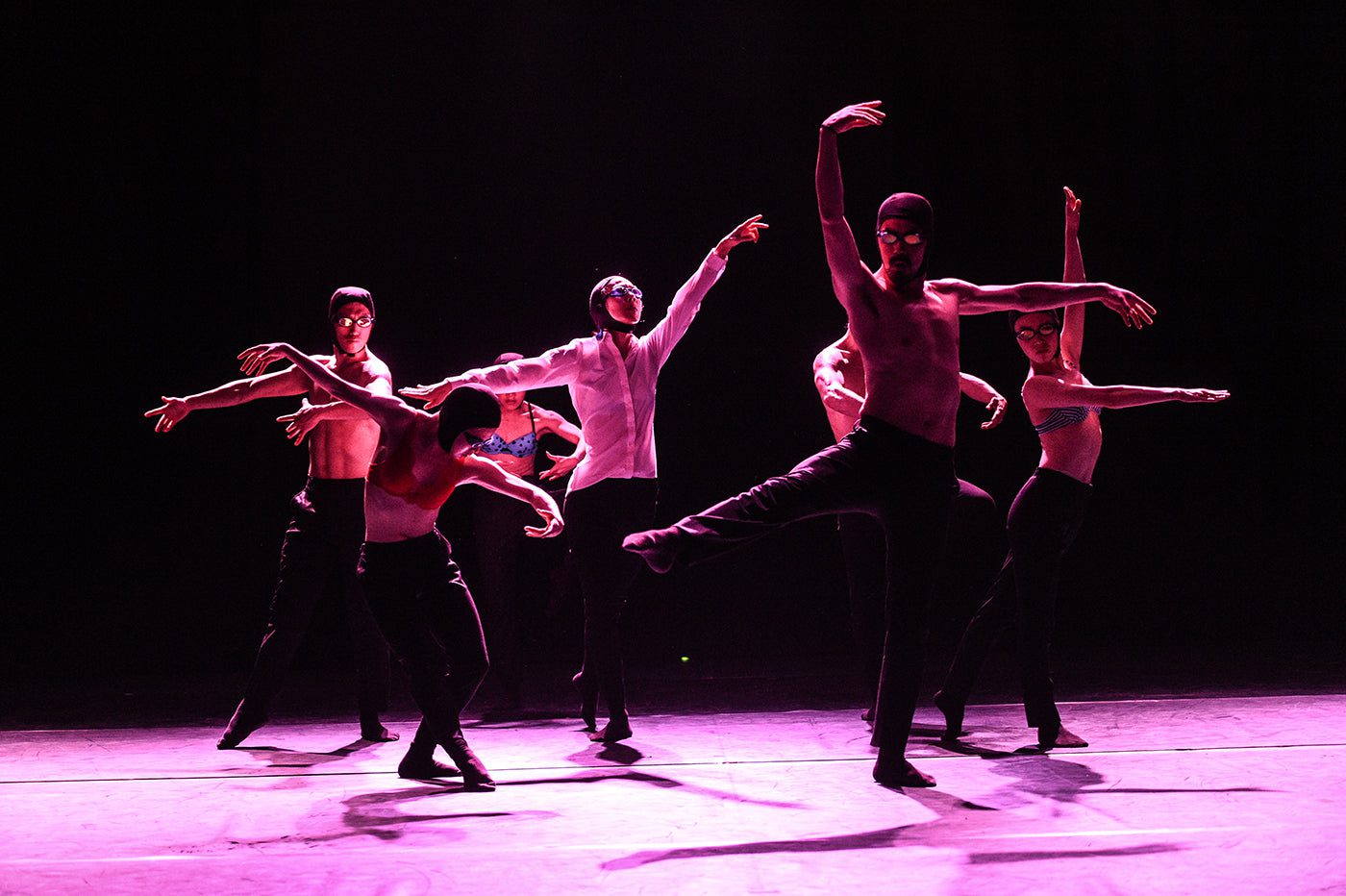 With the Berliner Festspiel under renovation on Berlin’s western end, artistic director, Virve Sutinen, spread this year’s Tanz im August festival (TIA)—its 33rd—throughout venues in the eastern part of the city. By theater and neighborhood, here are 15 of the shows I took in at this year’s TIA. Each theater has a bar, but not one has so much as a standing or ceiling fan to fend off sweltering heat. So it’s BYOF—Bring Your Own Fan.

In Kreuzberg, the edgy venues along the Landwehr Canal are HAU2 at Hallesches Ufer 32, the HQ for the festival with a new dance library that hosts intimate panels and brief talks, an elevator and a cool outdoor café where everyone discusses the show afterwards. HAU (all short for Hebbel am Ufer) 1 is a bit of a shabby but wonderful old proscenium theater with box seats. The funkier HAU3 is across the canal on Templehofer Ufer.

At HAU2 Canada’s Catherine Gaudet’s “The Fading of the Marvelous” could be a futuristic look at how humans may ambulate and show emotion (or not) after a world or personal calamity. It was rivetingly danced by Dany Desjardins, Caroline Gravel, Leïla Mailly, James Phillips and lastly, Simon Renaud—seen also in Daniel Léveillé’s “Quatuor tristesse” at the Venice Biennale, in June. Both works from Daniel Léveillé Danse, a Montreal-based consortium, were remarkable for their intensity and strange beauty. Side by side and nude from the waist up, the five take three miniscule steps forward and the same back, imperceptibly advancing toward the audience until suddenly they’re upon us. All the while, shoulders awkwardly lift, hands and fingers splay like crooked branches, knees bend inward, then down, hips jut out, arms rise above the head like slo-mo club dances—yet all remain in the cluster, invisibly connected, an agonized grimace turns to a little hiccup of a laugh. One motile organism motivated by a primal force, they seem to be fulfilling a biological imperative in this brilliantly conceived, well-realized dance that ultimately ends in tableau vivant.

At HAU1, from South Korea, Ambiguous Dance Company’s “Body Concert” was by far the most endearing and provocative dance, often uproarious in its themes and executions. They plunge us into total darkness to appear beneath the stage’s apron and among the audience. Wearing what look like diving hoods and goggles over white dress shirts and black suits (that later strip off to shiny leggings) the seven dancers engaged us instantaneously as strange sea creatures, house dancing among us before diving up onto the stage to make a splash in our imaginations. They horse around as cowboys at a hoedown, swim through Handel’s aria Lascia ch’io pianga, and use ten different pieces of music ranging from Baroque to MC Hammer to create as many different dance styles. They can do it all, and you can’t pin them down. And that’s the way they want it, Uh Huh.

Sweden’s Gunilla Heilberg/Theater im Bahnhof performed “The Wonderful and The Ordinary” a forgettable play on memory. I do mean play, as it mostly presented a series of theatrical monologues, well delivered but with very little dance. Discussions in the café centered on why it was on the festival at all. It should have relied more on muscle memory than mental.

From Norway Alan Lucien Øyen/winter guests: “Story, story, die” takes its title from the improv game where one player begins a story, an MC cuts it at will and points to the next player who must take up the story as though it were hers, or be told by the audience to DIE! Øyen replaces the players with dancers, and even if you don’t know the premise, it becomes clear that each is picking up the other’s thread. Tanztheater Wuppertal chose Øyen to mount the first new choreography on it since Pina Bausch’s untimely death. With “Story,” you see why. Episodic in style, sexiness, and startlingly original highlights do give it that Bauschian feel. Zander Constant is especially compelling whether as a painted skeleton or in his slinky red sheath.

At HAU2, France’s Latifa Laâbissi’s “White Dog” began as a community activity with Laâbissi, Sophiatou Kossoko, Jessica Batut, and Volmir Cordeiro primordially crouching around a mound of white rope. They fashion fantastical headdresses for themselves with endless variety. As the cast rises to dance, the atmosphere devolves into trance-like individual dances and then into a kind of drugged madness. Their gold dental fixtures increased the menacing sense of aggression. The haunting, fantastical set by Nadia Lauro comprised poles wrapped in the white roping that snaked out like tree limbs and bobbed slightly from the dancers’ vibrations as they moved among them. They end in an apotheosis of slapping, yelling, spinning and deep bowing to sound designer Manuel Coursin’s bluesy endnotes.

HAU3: At this third floor black box theater, the U. S./Belgian couple Albert Quesada and Katie Vickers danced “OneTwoThreeOneTwo”—titled after the counts for flamenco. Vickers, a stand-in for the work’s co-choreographer, Zoltán Vakulya, danced as though she had invented it. And in part, she did, since there was leeway for improvisation in this whiplash smart work that evoked flamenco and bullfighting in subtle and overt ways. The costumes echoed a toreador’s outfit, deconstructed and minimal. Hers: high-waisted white pants, a black bandeau slashed across her breasts. His: a red jacket over black shorts with what at first looked like a tattoo or a bruise on one thigh. Gradually sweat causes it to dribble down like black blood, as though the thigh had been gored. The two daringly danced this forceful work, simple in concept, complex in execution. To a soundscape by Quesada that included the jaleo or hand-clapping urging flamenco dancers onto the floor, they rapidly circled and bruised by each other, juddering across the space on their heels as in an arena. Vickers, arms arcing like propellers forcing her backwards, reminded me of a tape rewind—to a past era? The dance signifies very differently with a female dancer than it does between Vakulya and Quesada where intimate masculinities collide. (Philadelphia Dance Projects presents the work in Philadelphia next January.)

Radialsystem—a former sewage pumping station—sits on the Spree river not far from Berlin’s famed all night anything-goes clubs like the Berghain/Panorama Bar in Friedrichshain. It has its own cool vibe and was an appropriately funky venue for “Kata,” performed by France’s Anne Nguyen and her Compagnie par Terre. The now 40+ year old street art of breaking is becoming an Olympic sport. So when is it a dance? Not here. Nguyen tells us in the program notes she wants to show male aggression but this aggregation of superbly virtuosic street stunts doesn’t make it to the stage as a coherent work of art. Telling us your intention doesn’t mean you’ve reached it. Show it.

In other parts of the venue, this year’s festival fêted honoree, American choreographer Deborah Hay with many seminars and talkbacks as well as performances of her works. In “The Match,” Sweden’s Cullberg unflinchingly performed a complex dance that began with Eleanor Campbell in skirt, sweater, tennis shoes and anklets à la Rosas (she did study at P.A.R.T.S) cantering around the stage in perfect circles for about ten minutes before coming to a stall among the lineup of her three colleagues. They break out into Babylonian histrionics—“spontaneously cast” solos that have been described as funny and odd. Some audience simply walked out of the fully lit theater (original lighting design by Jennifer Tipton, and adapted by Ivan Wahren) unconvinced about the first adjective. Later, in another part of the building, “Ten’s” decuplet of Berlin dancers failed to find their geometrical groove among the vertical and horizontal poles defining the space.

In the Mitte, Deutsches Theater Berlin is a beautifully spare classical building that hosted Jérôme Bel’s “Isadora Duncan.” He simply branded the reenactments “choreographic,” as performed with Duncanesque vigor by Elisabeth Schwartz and pedantically narrated in English by Sheila Atala off to the side reading from a computer. Bel no longer flies in order to help save the environment. Wondering what he’s going to do with all those computers when they fritter out from repetition.

Sophiensaele, near the famed Hackescher Markt, is a former trade association building turned into a theater in the mid-90s. It presents much of Berlin’s dance throughout the year and was a good spot for Hay’s “The Man Who Grew Common in Wisdom.” Eva Mohn danced its three different sections with astonishing versatility. And 1999’s “Fire,” danced by Ros Warby, was another stunner that held up to time’s ravages. Another night, Belgium’s deufert&plischke’s “Liebestod” vaguely and vainly attempted to connect their spoken banal stories of love to the dances run on a diagonal band across the space. Didn’t move me.

Magnificently restored since WWII, the Volksbühne on Rosa-Luxemburg-Platz gave a three night nod to the Merce Cunningham Centennial: Berlin. Thomas Caley, a six-year veteran of MCDC, whose larger-than-life performance stunned me in Cunningham’s “BIPED” in 1999, directed rehearsals for the two iconic MCDC favorites, “RainForest” and “Sounddance” performed by CCN—Ballet de Lorraine. “RainForest,” was far more successful. Andy Warhol’s wondrous “silver clouds”—helium-inflated Mylar balloons—bobbed from cables above and bounded around the stage and off into the audience to the delight of front row seaters who patted them back. David Tudor’s score evoked birds chirping madly before a storm or from an onrushing fire. The dancers, in nude body suits, custom razor slashed by Jasper Johns, did their bits as furiously as birds going this way and that in leaps, death drops to the floor, rapidly flicking limbs, and alternating whiplash turns.

Ty Boomershine led his Dance On Ensemble of five in this dance of interchangeable solos, duets, and trios determined by a blackboard, with another Cunningham alum, Daniel Squire (a ten-year MCDC tenure that ended in 2009) as rehearsal director for “Berlin Story,” a re-imagination of Merce Cunningham’s 1963  “STORY.” The Robert Rauschenberg-directed set is constructed of randomly found objects on performance day making it a seminal work in the history of Object Theatre. Its frequent costume changes, blithely joyful dances, nonsensical set machinations, and live music by Rabih Mroué, Mattef Kuhlmey, and Tobias Weber, gave the piece its larkiness.

“Sounddance,” too carefully performed and without the burst of energy performers like Cunningham or, later even more so by Robert Swinston, lacked that initial explosion through the curtains and then being sucked back into its vortex that makes the dance so thrilling. But Tudor’s scores for each work sounded fresh as this morning’s first burst of birdsong.