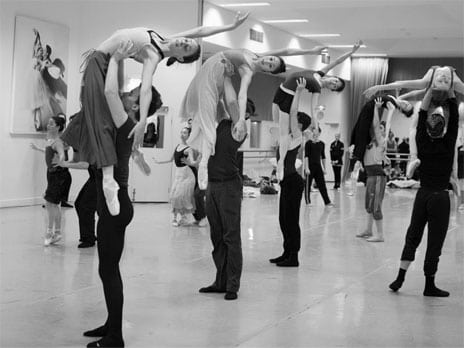 Artists of the Australian Ballet in rehearsal for “Swan Lake.” Photograph by Lynette-Wills
Gracia Haby·
Reviews
·6

It is circles I see, and always have, whenever I listen, and often I do, to Piotr Illyich Tchaikovsky’s “Swan Lake.” For me, one stimulates the other, and the composition upon every visit sets to the business of drawing its familiar beloved circles, from the large and sweeping to the tightly coiled. Melodic circles that anyone can hum or whistle, or with finger tap out on the table; such a union of the senses is what “Swan Lake” is for me. That is what I hear in the music, and see in the choreography, a melody and a romanticism impossible to resist or ignore.

In anticipation of Stephen Baynes’ “Swan Lake” an Australian Ballet premiere, I listened often to a recording (split over two discs) by L’Symphonique de Montréal, conducted by Charles Dutoit. I watched on DVD the Royal Swedish Ballet with Nathalie Nordquist as Odette/Odile and Anders Nordström as her Prince Siegfried (with choreography by Marius Petipa and Lev Ivanov, and Sir Peter Wright). And I watched an episode of A year inside The Australian Ballet, “Dressing the Ballet” in which we follow senior artist Amy Harris through the costume department of the Australian Ballet to view the exquisite work of designer Hugh Colman and team. In this sixth episode of a planned ten behind-the-scenes appetisers, set amidst the brocade and tulle, we learn that the pearls upon the bodice of the Swans speak of the tears the parents of Odette have shed. Their tears have formed pearls, such is their anguish; their grief has formed a lake, in this ballet tale familiar to so many. Familiar and loved by so many, to see a production of “Swan Lake” is close to some kind of magical love affair. The preparation I have briefly spoken of here reads almost like the preparation one does to meet a loved one: the polishing of ourselves in order to best present a handsome, ravishing, knowledgeable picture. “Swan Lake” is a ballet loved by many, few would disagree, and to the ballet, we, the audience, bring with us all our memories and devotion.

Earlier in the year, I was invited to see a little of the 19th century styled costumes designed by Colman for the Australian Ballet’s then forthcoming production of Baynes’ “Swan Lake.” (Such stuff to whet the appetite! Delirious emersion!) There, with own eyes I saw, hanging in neatly ordered and labelled rows, White Swan tutus awaiting only a dancer to bring to life their beauty and elegance, the moving dream that is the power of costume. Seeing the Black Swan’s tutu brings me closer to imagining how it might feel to perform Odile’s thirty-two fouettés. (Of interesting note: the Black Swan first appeared in 1941 “in a performance by the Ballet Russe de Monte Carlo in New York. Today the Black Swan is an essential element of the story, though few realise how recent an addition she is.”1 Previously she appeared in disguise, but not sporting black feathers.) Seeing the costumes made for the Queen, to be played by former Australian Ballet principal Lisa Bolte, I feel as though I have stepped into the year 1890, the year in which this new production is set. This is what one would wear in a Prussian court.

To then see those very costumes on stage worn by Lucinda Dunn as Odette and Ty King-Wall as the Prince, the night was as magical as long I’d hoped, with their final intimate pas de deux a beautiful pull at the heart strings. At glorious end, I am left full of gathered and marvellous impressions that I scarcely know where to begin.

Hearing the orchestra play, I am reminded of a journal entry on January 30, 1915 in W.N.P Barbellion’s The Journal of a Disappointed Man:

I love the way in which a beautiful melody flits around the Orchestra and its various components like a beautiful bird.2

Where I hear circles described by music’s tempo—sometimes tightly revolving, sometimes wide in lyrical sweep—for Barbellion, a bird in flight. Perhaps this ability to transform from one thing to another ensures a certain timelessness. A little musical metamorphosis, much like Odette’s own painful transformation. We all bring different things to “Swan Lake.” Some identify with the anguish of the Prince (which in Baynes’ choreography, the Prince’s suffering is deeply etched and adds to the narrative), others are held transfixed by the beauty of sorrow. For some, it is the choreography replete with its multiple turns of the body, back and forth, changing direction, changing pace. And everybody, it seems, loves those cygnets in perfect unison. We give ourselves up freely to sink into the beautiful tragedy of it all, with its promise and hope at the tail, and its fantastical lake so inky and becoming. And what a lake it is we are treated to in this recent production. It is mesmerising stuff, this wild, untameable nature that has held in its spell Byron, Wagner, Shelley, Wordsworth et al. This lake serves almost as another character in the tale. It shimmers and is ever present. It is more than mere background fodder. Choreography, costumes, set design: this “Swan Lake” is connected to and pulled by water. We are not flying through the air and light. Real and human aches are explored.

I had been forewarned of a particular brief though no less fantastical and powerful moment that occurs twice in the production. No more about this was I told. Wait and see; you’ll know it. Indeed I did. A subtle yet effective use of projection by designer and director Domenico Bartolo (of the design group 21.19), the brevity of this projected symbolism ensured it struck the right chord: a visual punch that adds but never distracts.

As principal artist Amber Scott explains in “Becoming Odette,” ‘in the current company, no one has danced the full four acts of the classical “Swan Lake;” everyone is making a debut this season.”3 In Baynes’ “Swan Lake,” the narrative arcs that Odette and Prince Siegfried wend are of greatest importance. Characters are fleshed out and extended, and new meaning and import given. Of the choreography, Scott continues, “ . . . because it is so pure, you have to have this really uncluttered technique. Every little nuance and ruffle of your feathers, there’s a lot of really fine detail that needs to be clarified and personalised as well.”4 As Baynes’ himself expresses in his Choreographer’s Note, this new production is traditional. “Apart from [Act II] and the Black Swan pas de deux, all the other choreography for the other three acts is my own. In Act II I have adhered mostly to the Kirov version, although I have made several alterations, including the choreography for the Lead Swans, which is essentially my own.”5

I leave you with this quote from W.N.P. Barbellion after spending an evening listening to Tchaikovsky: “Came away thoroughly delighted. Wanted to say to everyone “Bally good, ain’t it?” and then we would all shake hands and go home whistling.”6 It sums up, in part, how I felt as I left the State Theatre. Exhilarated. Entranced. Connected. Capable of whistling.

Previous
The Shock of the New

Next
Move to Move