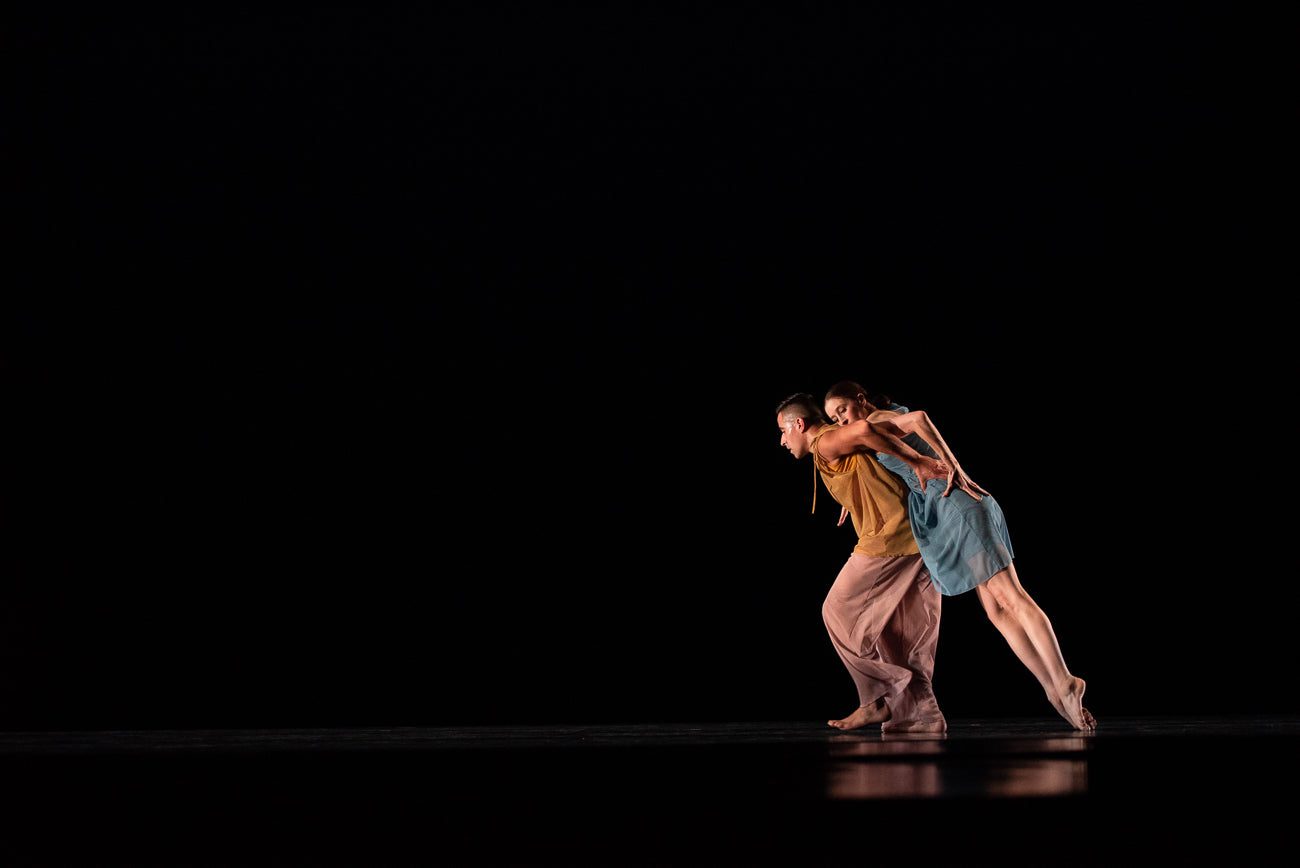 At first glance, everything in Salt Lake City, Utah’s Jeanne Wagner Theatre looks relatively typical. Rows of red velvet seats line the two aisles that lead to a dimly lit proscenium stage. Audience members chat in hushed tones as they take their seats. Ushers shuffle programs as they prepare for the show to begin.

At a closer glance, though, there are a few things that make the theater different this afternoon. In the back corners of the room, nearest the doors, two colorful children’s tents are pitched to create quiet, cozy areas. Small, type-written signs designate the left-most side of the theater as a “scent free zone.” The house lights don’t fully dim, even as the show starts. And in the front of the house, an ASL interpreter signs as Ririe-Woodbury Dance Company’s education director Ai Fujii Nelson welcomes the audience and explains why this afternoon’s performance is so special.

The matinee show on Saturday, September 18 marked the first iteration of Ririe-Woodbury’s Moving Parts series, which focuses on creating an inclusive experience for disabled audience members. In addition to the cozy areas, scent-free zone, and ASL interpreter, audience members are allowed to leave during the performance if needed, and the intensity of lights and sounds are reduced. Each of these adaptations was designed with the disabled community in mind. In turn, the added accommodations and relaxed atmosphere also make the Moving Parts series perfect for young children or people new to experiencing dance.

“Ririe-Woodbury’s motto is ‘dance is for everybody,’ so accessibility has really been close to the core of our mission.” says Fujii Nelson. “The sensory-friendly type of performance came on our radar a while ago and was kind of one of our dream goals.”

In fact, it took about nine years of dreaming, planning, and educating before the company felt equipped to put Moving Parts together. With the sudden abundance of time afforded by the Covid lockdowns in March 2020, Fujii Nelson, outreach director Juan Carlos Claudio, and artistic director Daniel Charon took a six-week accessibility-focused course targeted at arts organizations.

“That pushed us and gave us the foundation and the courage to do it,” Fujii Nelson says. “They held us accountable, too. They told us not just to do the workshop, but to make something happen.”

Ririe-Woodbury is not the only company taking these steps; the dance world at large is having an accessibility reckoning. Across the field, the status quo is being examined and organizations are looking more critically at who gets an opportunity to see dance—and the type of audiences for which dance is traditionally made.

Dance has long held itself as an elite art form, accessible to only a select few. And beyond that, dance performance has long been available in only one way: a quiet, proscenium theater. Site-specific dances and the Covid-necessitated move to a virtual format have made dance more available than ever, but the theater is still falling behind in terms of accessibility.

“Moving Parts is an invitation to new ideas and new ways of opening and breaking those Western—or universal in many cases—standards of what it is to see a dance performance,” says Claudio. “I don’t want any family having to leave their kid at home because he has behavioral issues and they want to go to the show. We want to make that child part of the art, part of dance, and part of the experience we offer.”

For the first iteration of the Moving Parts Series, the six-dancer company presented “Total Ellipse,” a three-part bill featuring two premieres, “On Being,” by Charon, and “Two-Hearted,” by Keerati Jinakunwiphat, in addition to a screening of “Blue Sky Theater,” an educational dance film created by the company at the onset of the pandemic. In terms of programming, the only difference between the Moving Parts performance and the two evening renditions of “Total Ellipse“ was the replacement of Raja Feather Kelly’s “Pantheon” for “Blue Sky Theater.”

Going forward, Ririe Woodbury plans to hold a Moving Parts counterpart to each performance they present. There are hopes to expand access points through added elements such as audio descriptions and pre-visit materials to make sure audience members feel comfortable in the space. According to Fujii Nelson, Charon is brainstorming ways to integrate accessibility elements into the artistry of the performance, too.

But in some ways, they already are. During a Moving Parts show, the music and the sounds of the dancers are accompanied by the soft voices of children talking to their parents—and in some cases—the movements of their little bodies dancing along. The theater feels like a less rigid space; there’s no need to be proper, and audience members aren’t hesitant to engage with the art in their own way.

To some, perhaps a Moving Parts performance isn’t so different from a typical afternoon at the theater. But to others, the difference is paramount.