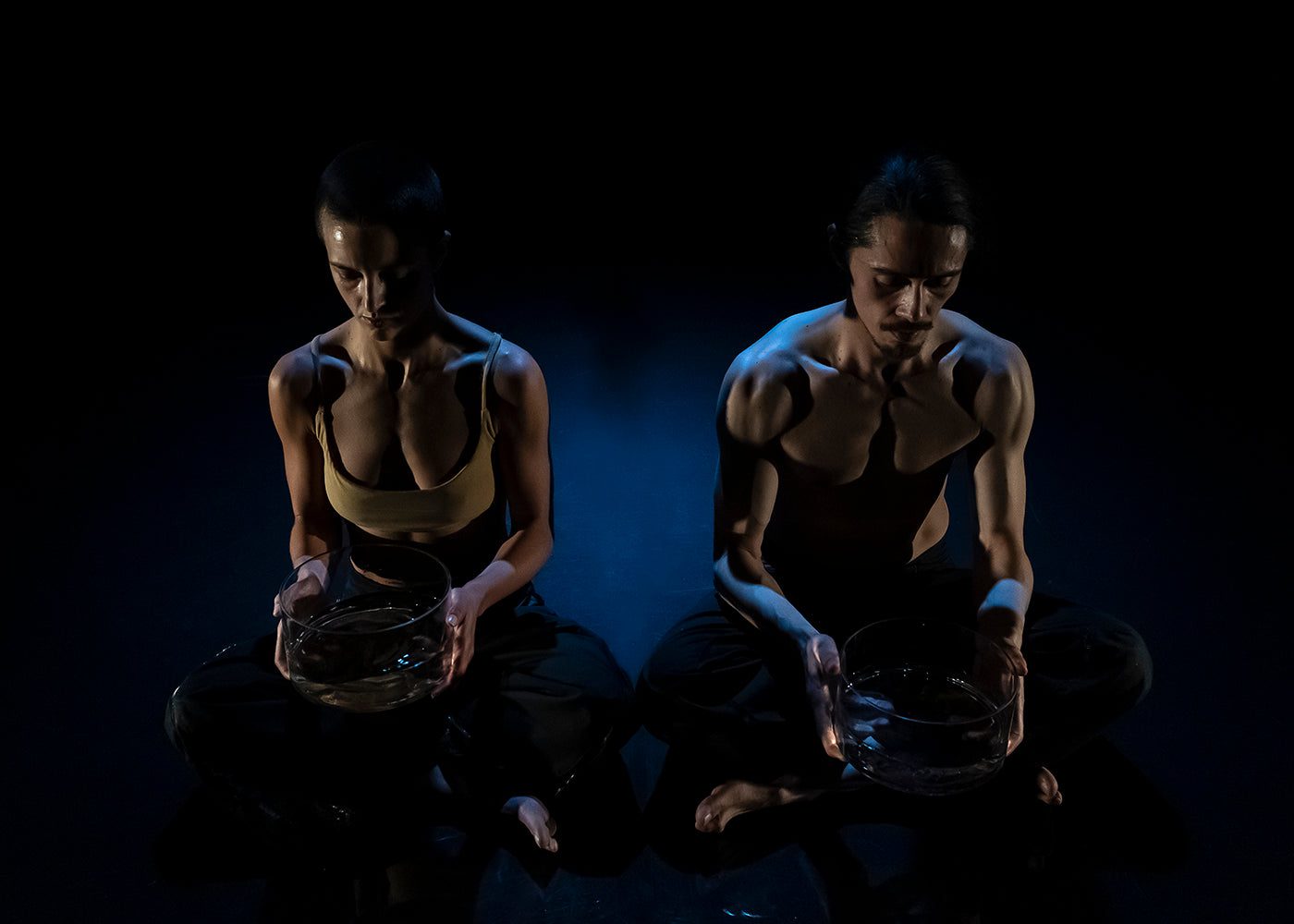 Explicit content may refer to a parental advisory warning label used by the music industry, but add an ‘s’ to ‘content’ and it is more likely that the explicit contents choreographer Rhiannon Newton is referring to come from the physical act of unfurling something to reveal what lies within.

The Latin origin of the words, explicitus est liber, translate as ‘to unfold’ or ‘to roll out.’ They are the closing words of a manuscript. Today’s “The End.” You have unrolled the text, absorbed the knowledge, and in doing so, your action has rendered the information, the contents, ‘explicit’ to the world. Just as explicit implies an unfolding across space, laid out before us, and the light that is required to read what is laid out before us, so too does Newton’s “Explicit Contents” (2021), on the night of its Melbourne premiere.

“Explicit Contents” began before we entered Dancehouse’s Sylvia Staehli Theatre, with dancers David Huggins and Ivey Wawn inhabiting the space. Each in their own world, yet connected, feeling the space. Ready to unfurl, in the light. Newton invites us, the audience, “to feel, in a bodily kind of way, how we are part of the environment and how the environment continues inside us. I almost imagine we share a nervous system,”1 she explains. If within each and every one of us there is a central and peripheral nervous system that works together to communicate sensory information and needs to the body, imagine the exhilarating charge of sensory information if we connected all those receptors together in the one scroll, one space. Not a chain of impulses, but a theatre of impulses bubbling messages back and forth!

The lights go out! Pitch black. The potential of a super-feeling collective mass may have overloaded the system.

Eyes adjust, slowly, and the figures of Huggins and Wawn are barely discernible. I am in the theatre still, I think. Earlier, I had been standing in someone’s front garden, waiting for nightfall. Waiting for the birds to roost so that I could release a recuperated microbat back into the wild. I listened then as I listen now to ‘see’ around me—it is the closest I’ll get to being able to echolocate. A “visceral journey through the body’s entanglement with the environment”,2 just as Newton hoped. Dance extends beyond the moment you are in the theatre. That’s the beautiful intricacy of the nervous system for you.

Huggins and Wawn are barely moving, and yet now they are lying face down. Now, they are reclining backwards. Weren’t they facing the other way before? Each is held in a faint puddle of light which makes the darkness around them denser. Or perhaps that’s my eyesight? Either way, they appear to float in space, thanks to the evocative lighting design of Karen Norris. Each moves in accord with the other, but in a distinct way. As variations, just like in nature, no two strictly alike. Huggins and Wawn each extend a tentative limb, a sensory receptor, and respond to the airflow, just as bats do, too, using tactile feedback from their wings to control their flight manoeuvres. The hair follicles on their arms having triggered a necessary adjustment, Huggins and Wawn, in Plough-like pose, slowly move their legs clockwise before folding over on their sides. It is mesmerising, this suspension, ever questioning “how we can sense ourselves as a part of—and constituted by—the ecologies of the world.”3

Drip. Drip. Drip. A leaky tap, but from somewhere overhead. Two puddles appear on the black mirror-like flooring before both Huggins and Wawn. And just as a theatre of people are responding with a combined nervous system, there might be two puddles, but I hear only one drip, drip, drip.

Crackle. Frizzle. Hum. The sound like an old radiator heater. Huggins and Wawn are now upright and a current appears to run through them. “The body heats up and burns from the inside out. Charged with more energy than one can hold.”4 They push at the walls, as if to prevent them from caving in. They mop the floor, but the electricity still sparks, dangerously conjured by sound design by Peter Lenaerts.

Slurp. Nibble. Chomp. At the foot of the stage, Huggins eats a mango, and Wawn, a passionfruit, with the quiet fixation of the hungry. From “burning and cooling [to] hungering and satiating, incorporating and expelling, the body emerges as a site of action and exchange” in this reading, hollow to full, and ever alert to any change in state. “The skin, like the theatre, is porous—dotted with entrances and exits.”5 I hadn’t expected to be thinking about merkel cells, our touch receptors found in the skin that dance endlessly each day with our touch screens. Before the performance, I’d been looking up about how microbats fly. They cradle their young with their wings, and they climb walls, and so the merkel cells in a bat are located at their thumbs and fingers and along the leading edge of their wings. Together with their hair receptors that monitor air flow, and what is believed to be stretch receptors at the outer wing which respond to changes in wind, it makes them the nimblest of flyers. Thinking about the neuroscience of bat flight merges with the performance’s contents, where “one material meets another and pushes up against it realises the force of its own will,”6 Wednesday’s sensorial encounter, at the blurry edges.

Next
United in Intention, Individual in Execution