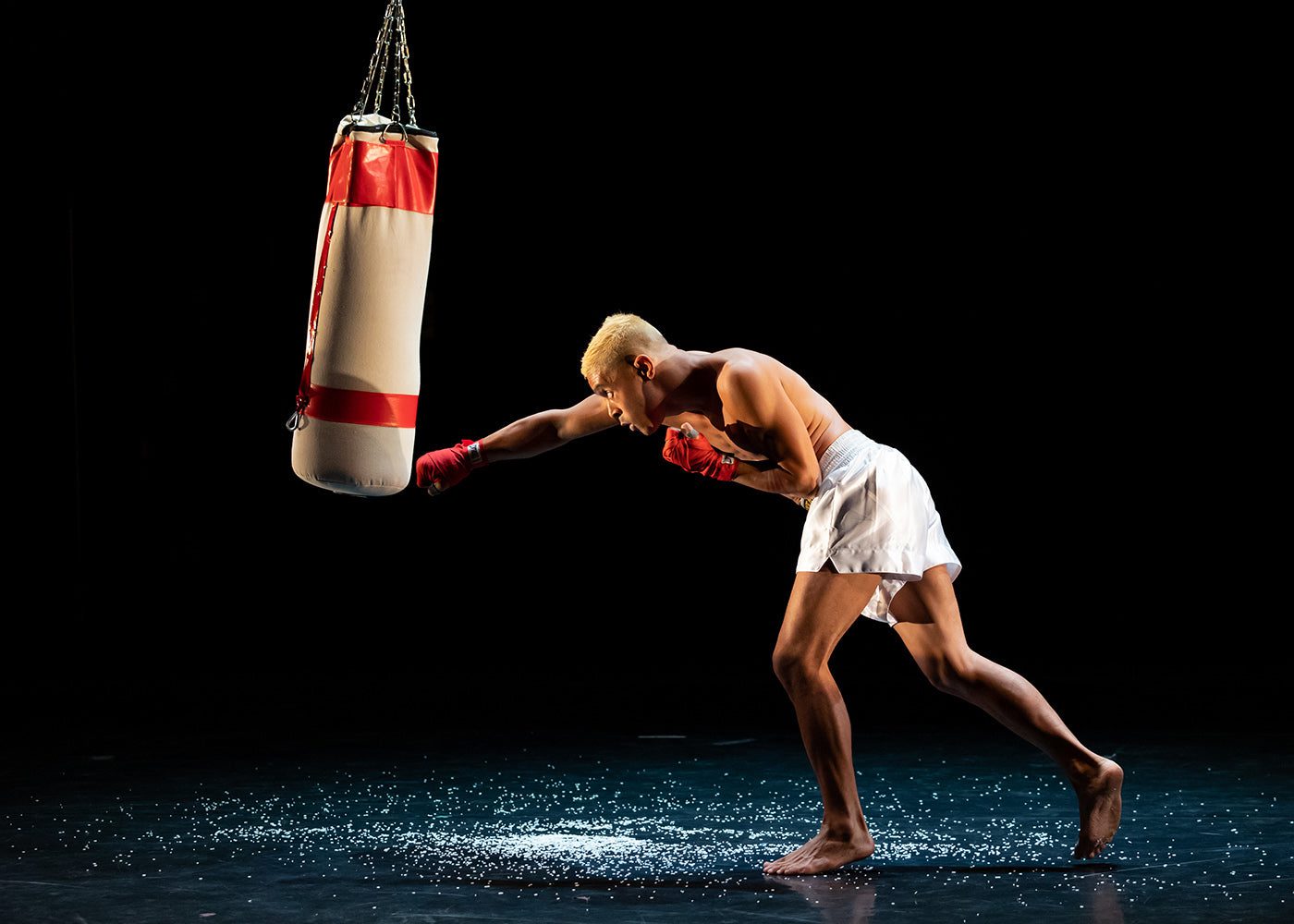 After the pandemic shutdown, it felt so good to be back in REDCAT’s beautiful black box space for its annual three-week New Original Works Festival (NOW). Currently in its 19th edition—a feat in and of itself, the theater having opened in 2003—the celebrated series features nine premieres by some of Los Angeles’ foremost dance, theater, music and multimedia artists.

And with so much happening in the world today, it was no surprise that the trio of works in Week Two were heavy on the drama, with Joe Diebes’ piece, “ENG,” kicking off the evening in, one might say, depression mode. The press notes refer to the work as a “broken-word opera structured around a newscast format . . . in relation to the Middle East,” with Diebes’ music, words (except for actual news stories) and video on full display.

The so-called broadcasters/actors, Christina Campanella and John Rose, sat behind desks reciting snippets of news, with buzz words including ‘Israel,’ ‘Iran,’ ‘enriching uranium,’ and the like, their voices perfectly modulated in that anchor-desk kind of way. Set to Diebes’ restless score, the work had a lean look (lighting design by Chu-Hsuan Chang, who provided same for all three works), with visuals projected behind them recalling a black and white YouTube tutorial: A lone hand traversed the screen, drawing and then erasing things such as checked boxes and scribbly doodles.

The duo effectively punctuated their monologues with existential phrases—“What I say I say,” and the inevitable, “It is what it is,” occasionally leaving the confines of their desks to come forward and speak directly to the audience. Their robotic delivery recalled Kubrick’s iconic computer, Hal, from his 1968 masterpiece, 2001: A Space Odyssey, making this reviewer wonder when the performers’ voices would also wind down en route to malfunctioning à la Hal.

If the work aspired to be something akin to that of avant-garde composer/performer Laurie Anderson, it did not succeed. Indeed, another performer, Simone Forti, who literally danced the news during her illustrious and lengthy career, managed to create a more lasting impact with her physicalized monologues of current events. Because, as clever, well-produced and ably acted as the 25-minute work was, it lacked a veritable freshness. But maybe that’s the point: The news today, well, mostly sucks, so what can we really do about it?

“Novena” (derived from the Bisaya ritual for grieving and healing), was directed and performed by queer Filipinx American dance artist Jay Carlon, with Micaela Tobin making her own music and occasionally crooning in wistful, ethereal tones while situated at the rear of the stage and elevated.

The opus began with much promise: Carlon, clad in a pair of boxer’s satin shorts, darted around the theater carrying some sort of bag on his back before he took to the stage, in this case, Carlo Maghirang’s design of a pulley-type chain and long piece of plastic. As for the contents of the aforementioned bag Carlon bore like a burden? Rice. Pounds and pounds of rice that the performer used to fill what then became a heavy bag that boxers use in training.

An excerpt from Carlon’s “WAKE,” which premieres next year, “Novena,” took its time . . . deliberately. The performer, now sparring, did not conjure images of Rocky running up those Philadelphia steps or De Niro’s Jake LaMotta, giving and receiving blows in Scorsese’s Raging Bull. But it did have some Zen-like elements, with Carlon doing a bit of aerial work on and with the bag, as well as cavorting with it in a scene that nearly—but not quite—recalled Charlie Chaplin’s brilliant ballet with a giant globe/cum/balloon in his 1940 film classic, The Great Dictator.

Shortly thereafter, Carlon began letting the rice out of the bag (“Like sands through the hourglass, so are the days of our lives”), eventually having it rain down on him as he thrashed around, with the work, unfortunately, slowing to a sloth’s crawl.

With both Carlon and Tobin striving to reimagine the Filipinx experience through performance, their vision did not prove strong enough. But a skilled director with an outside pair of eyes would certainly help.

Danced mostly in silence, save for the sounds of the performers’ bare feet, breathing, and occasional bouts of bawdy laughter, there was also a judicious use of bells, Tibetan or otherwise. The piece saw the quartet deploy a variety of moves from backwards somersaults and yoga-like poses to splits and active couplings. In essence, the composition was its own breed/brand of ASL, a type of sign language . . . of the body, if you will.

At one point, Feder brandished a tiny harp: Accompanying herself with pianissimo vocals, it was her own tune, “The Sunset Song,” that helped create a meditative calm that seemed to wash over the space. It was then that the other three dancers resembled muses, their arms raised and, yes, evoking in some distant way, Balanchine’s “Apollo.”

A sense of play and exploration also coursed throughout the creation, with connotations of religious rituals interspersed between the silences. Chang’s lighting made for some appealing shadow play, as well, the dancers’ silhouettes generating suggestive tableaux. Enigmatic at best, random and unfocussed at worst, Zaletel’s work-in-progress could also benefit from keen direction.

Still, the concert was testament to the power of imagination and a shared hunger—from the audience point of view—to behold performers in the flesh, if only for a few hours on a Saturday evening in the City of Angels.