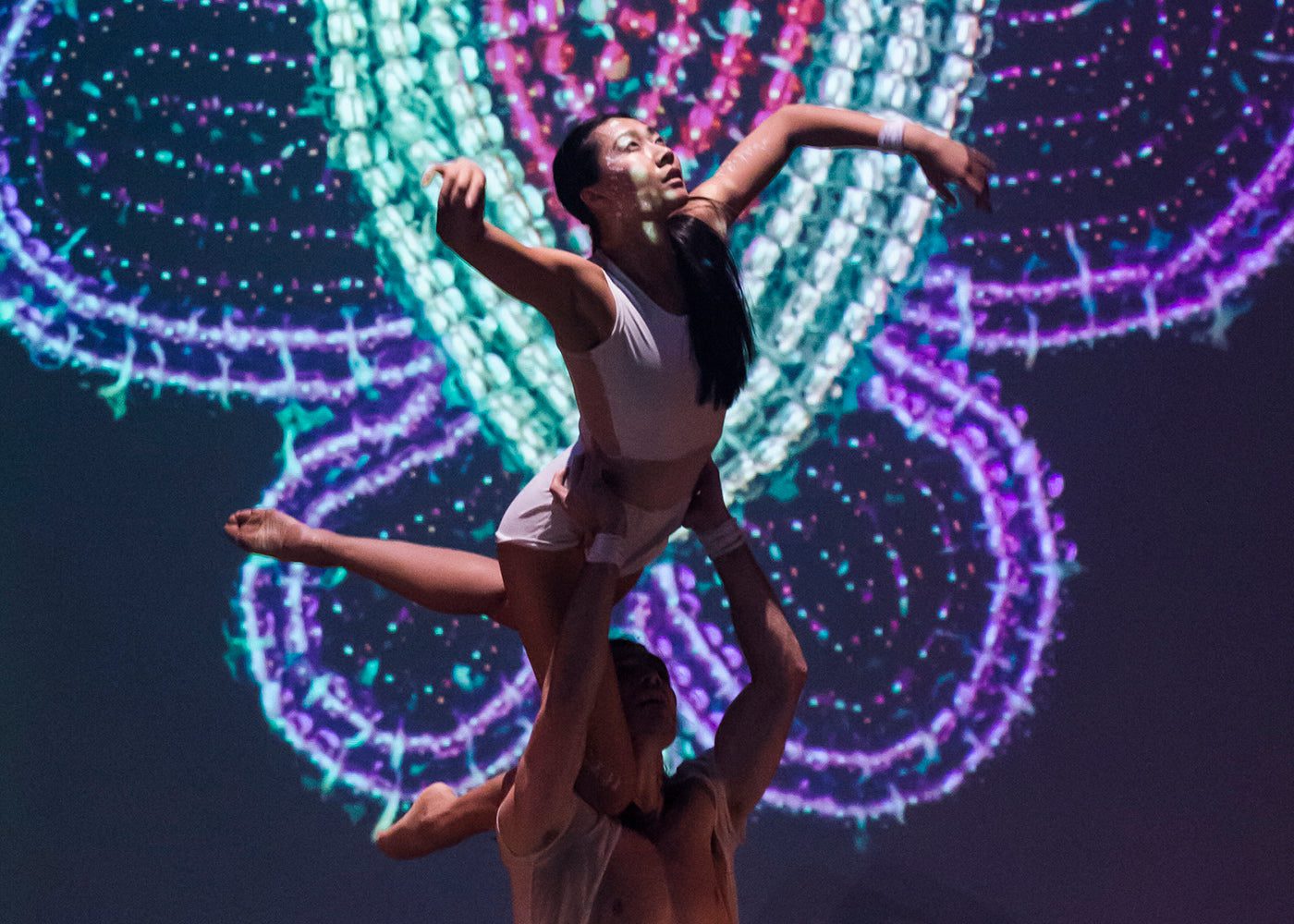 Red Sky Performance present More Than Dance, We Are A Movement

For Red Sky Performance, dance is deeply connected to oral traditions, ceremony, and place—the land and water of Turtle Island, a name that many Indigenous communities in Canada use to refer to the continent and the ancestral territories where they live, work, and create today.

The interconnectedness of Red Sky’s work as an indigenous contemporary dance company based in Toronto/Tkaronto comes to light in their recent feature-length film More Than Dance, We Are A Movement, co-produced with Les Productions Rivard. Spending their 20th anniversary year at home rather than on a planned North American tour, the film celebrates Red Sky’s ethos and distinct style, featuring excerpts of recent creations, “Miigis,” and “Trace.” Both pieces give expression to Anishnaabe origin stories with concept development by Red Sky Artistic Director Sandra Laronde of Anishnaabe heritage, and the choreography of Métis dance artist Jera Wolfe.

The first piece, “Miigis,” opens with a cluster of five dancers, bodies overlapping and close to the ground as they are slowly awakened by a dancer at the centre. It’s an evocative image of an organism breathing and coming to life, propelled into movement by the steady, low tones of six Indigenous music artists and vocalists performing live on stage. In unison, the dancers build in energy, thrusting their palms skyward and rolling their bodies from side to side in a motion suggesting the stride of a boat. Based on the Anishnaabe story of migration, miigis is the name for the oval-shaped cowry shell of a sea snail that symbolizes “the perfect breath of life” which guided Anishnaabe clans westward from the Atlantic Ocean to the Great Lakes.

There are many moments evocative of water throughout the piece, in the dancers’ rolling formations and undulating upper bodies. When the six-person ensemble gently unravels into smaller groups, Lonii Garnons-Williams emerges with an unwavering presence and technical precision, as do Julie Pham and Jera Wolfe who perform a virtuosic duet that begins in contact with the ground and progressively winds upwards in a series of twists and turns, growing in complexity like a pattern of knots.

There is a vibrant energy to “Miigis,” but it is somewhat hindered by the dark lighting and minimal costumes of the presentation, and some crucial storytelling elements have been left out in this recorded version. When “Miigis” was previously performed on the open stage of Fort York National Historic Site, it included a basket-like dome encapsulating the dancers, suggesting a miigis shell from which the dancers’ limbs push beyond like beams of radiating light. The dancers wear loose garments patterned with the many shades of water, bringing an ethereal and fluid texture to Wolfe’s choreography in this more colourful rendition.

Developing the theme of origins in the second half of the program, the film runs excerpts from “Trace,” which delve into Anishnaabe star and sky stories. While these smaller segments were artfully selected to convey the overall arc of the piece, it left me craving a fuller, uninterrupted performance. Without having seen “Trace” in its entirety, the production took greater leaps in its storytelling than “Miigis,” with layered soundscapes by Eliot Britton, live vocalists, projections by Marcella Grimaux, and animations by Daniel Faubert. In a tense opening scene, overwhelming electronic noise leads into a recording of Nelson Tagoona’s “throat boxing” from northern Canada to accompany dancer Julie Pham as she is carried and turned in a never-ending sequence of lifts that slowly descend to hover just above the floor, only to remount again. It’s a moment of multimedia synthesis, bringing narrative clarity to the moment that Sky Woman falls through a hole in the roots of a tree towards Earth, only to be guided gently downwards by a flock of birds.

Other notable moments in “Trace” include a ceaselessly flowing duet with Jera Wolfe and Bridget Lee who seem to be dancing the cycle of life itself, and the contrasting play of rhythms between dancers and music in a six-person ensemble executing rapid hand gestures over staccato notes and lone drum. There is a cosmic and metaphysical quality to “Trace,” as projections visualize the night sky, constellations, eclipses, fire, and history—a projected animation of white letters fall like snow behind Maori dancer Eddie Elliott who performs an engrossing solo, the projection transforming into a matrix of words from a 1921 document detailing Canada’s ban on Indigenous dance.

Notably, even when Red Sky touches upon a dark colonial past for Indigenous peoples in Canada, the dance never lingers on suffering. Rather, Red Sky wholly celebrates the alive-ness of Indigenous stories and worldviews, channelling this present moment for Indigenous arts while calling forth a resilient future.

Next
When We Fell