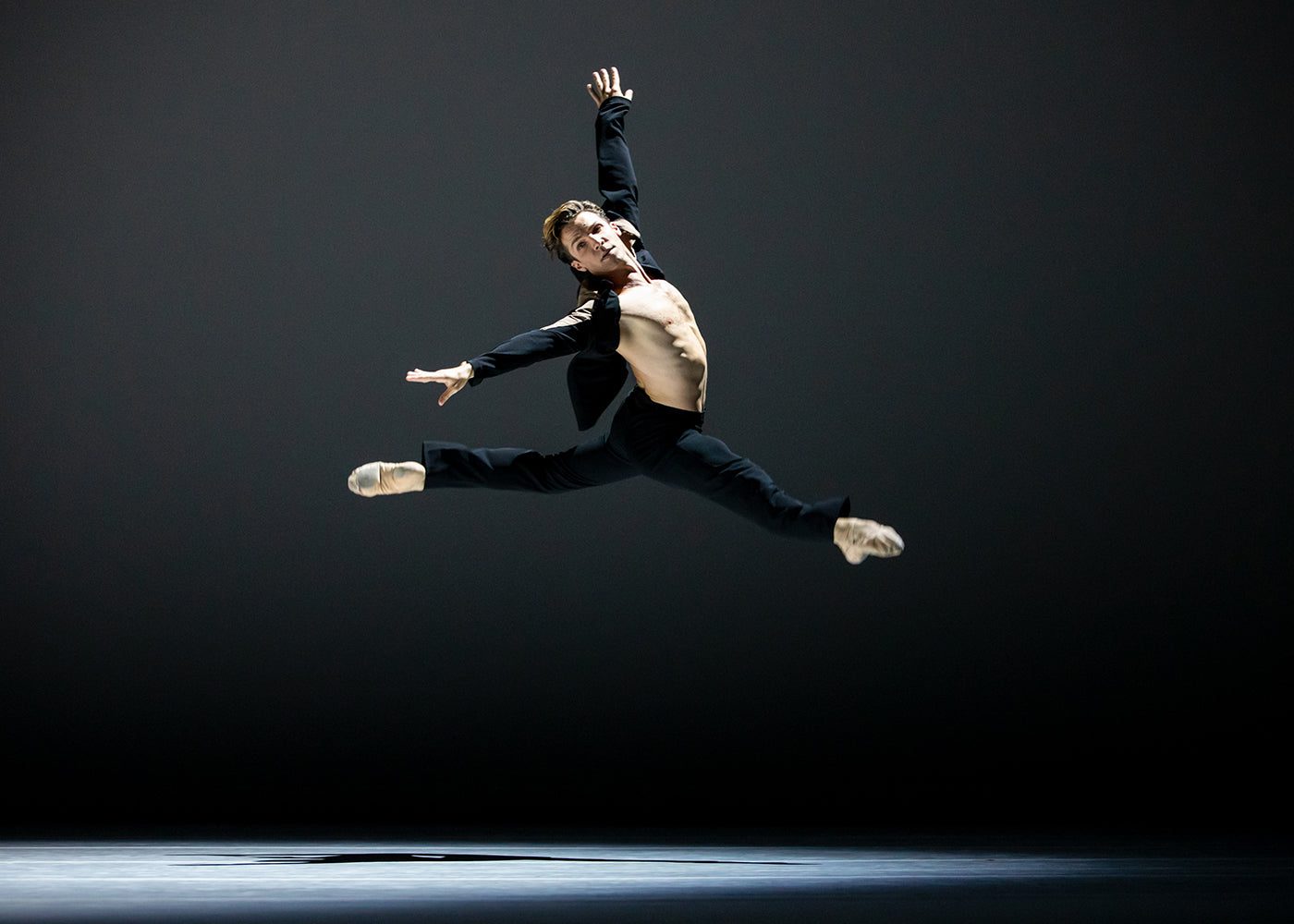 According to his note accompanying Pacific Northwest Ballet’s latest digital stream, twice a week, artistic director Peter Boal attends a pandemic-strategizing Zoom meeting with the world’s leading companies—American Ballet Theatre, the Royal Ballet, the National Ballet of Canada, and many more. Let’s hope other ballet leaders are listening keenly to his contributions, because this second repertory program shows PNB stepping up to our moment with encouraging grace and boldness.

Exactly what PNB is getting so right is not easy to pin down. It has to do with the tone of presentation. This program offered two world premieres, but what stays in mind more than the ballets is a behind-the-scenes openness to the company’s approach that is somehow profoundly humble. Like program one, this program began with a “Five Minute Call” film by soloist Dylan Wald showing the dancers in their dressing rooms. This could have been made glamorous, but wasn’t—no posing, not the slightest tinge of escapism, just a spare, focused feeling of work ethic.

Forgive me for further delaying a report on those world premieres, but a 30-minute interview between Boal and Twyla Tharp, offered as separate after-viewing for this program and worth the ticket price in itself, seems relevant. In it, Tharp and Boal talk about the dance studio as a kind of religion that replaced their early experiences as the children of Quakers, a space of every individual accepting the “burden” of giving his or her best. Her ballets, Tharp explains, are about the relationship between society and the individual—the beauty of the society supporting the individual so that the individual can in turn enrich the society. The daily faith required to maintain this spiritual endeavor in current conditions is no small matter. A normal repertory season would net $12 million, Boal notes in the interview; this PNB digital season will net one-sixth of that and run deeply in the red. Tharp makes a similarly frank admission about working with pandemic logistics: “Creativity used to get us to where we’ve never been before,” she says. “Now we’re using it to get us to where we used to be.”

But oh, what a blessed relief to be back there.

Neither of the two world premieres created for this program are about the pandemic, and neither tries to do anything particularly innovative in how they are filmed and edited. And frankly I found that refreshing.

Jessica Lang has choreographed her new “Ghost Variations” to “seamlessly transfer to the stage for live performance,” she writes in a program note. The subject is the history of its music, though you don’t need to know the story behind it to become absorbed in the human drama onstage.

Robert Schumann wrote his “Ghost Variations” for piano near the end of his life, as he was about to be committed to an insane asylum; he was tortured by a sense that dead composers were dictating the melody. Here, as soon as Lucien Postlewaite stretches into the light, he is followed by a shadow (a dancer behind the scrim) that chases and taunts. But there’s another shadow—a woman who could be interpreted as Clara Schumann, who guarded Robert’s work after he died. Lang uses Clara’s arrangement of Robert’s lieder “Mondnacht” for her final movement, a tender pas de deux between Dylan Wald and Elle Macy that you could read as a loving dance between the collaborating couple. But one thing I appreciate about this ballet is that any symbolic overlay is secondary. The more elemental story here is in moving from self-doubt to self-possession. Feeling that trajectory, I was most stirred by the penultimate section, a solo by Kyle Davis, in which the shadow (though cast in triplicate) is finally his own.

Ballet goers on the East Coast are now highly familiar with Lang, given her demand with major companies, but we’ve seen little of her work out west. “Ghost Variations” shows why she’s ascendant: the total package has quiet sophistication and integrity (the costumes by Jillian Lewis are especially fine, combining yards of Romantic-era tulle and patches of avant-garde asymmetry) but the choreography itself is the substance. Postlewaite gives us the prime motif, a kind of S-curve attitude with flexed foot that looks gestural, entirely natural. There’s rich subtlety in just that motif, which the ensemble men and women later pick up, but in a way that always feels organic and absorbed into the classical. There’s so much subtlety, too, in how the dancers drop in and out of unison; the whole ballet feels like a ball of mercury, and you marvel at how the atoms cling and separate, morphing the total shape. In short, this is a ballet to watch many times. Kanji Segawa, who has served as an assistant to the choreographer on a few past Lang works, is here credited as Creative Associate; pianist Christina Siemens deserves applause for her sensitive playing.

Penny Saunders is more of an emerging choreographer, in residence at Grand Rapids Ballet and beginning to pick up a lot of commissions, and what her world premiere “Wonderland” evidences on this program is more of a flair for theatrical devices than a subtlety in the movement itself. The “Wonderland” refers to Alice, although the character does not appear. (There’s another extra video with Noelani Pantastico in a separate “Alice” solo). This is just Alice’s universe, the inhabitants wearing tuxedo pants and white gloves, and dancing with angular freneticism to highly percussive music by Michael Wall that I think strains a little too hard toward the zany. What’s beautiful, though, is how Saunders uses the empty McCall Hall as a vast cosmos, with Lucien Postlewaite dancing a lonely, Pierrot-like solo in a high balcony. Also, Elizabeth Murphy delivers a gorgeous solo making softness her tool of illusion to a bit of warped Satie, and Dylan Wald and Elle Macy have a sweet duet sitting on the lip of the stage, and finally touching lips, to a hummed bit of Stephen Foster’s “Beautiful Dreamer.”

Another side-by-side duet, Susan Marshall’s signature work “Arms,” didn’t translate as well to the screen. Perhaps you need to be in a small blackbox space like New York’s P.S. 122, where this dance premiered in 1984, for maximum immersion; it’s also harder to endure Luis Resto’s pinging electronica score over a computer speaker. Miles Pertl and Leah Terada gave their dancing the full raw power of Marshall’s “action and response” technique, flinging arms around each others’ shoulders until the unvarnished velocity climaxed with mesmerizing rhythm. “Arms” function on this program seemed audience education, and I appreciated that, especially the fact that Boal included extra post-show videos of the duet performed by himself and Jim Kent, and Sarah Pasch and Ezra Thomson, to open eyes to the possibilities of gender fluidity in dance casting.

A different bit of dance history, excerpts from Tharp’s 1994 “Waterbaby Bagatelles,” came together marvelously. You would not have known, unless you listened to the Boal-Tharp interview, that the three bathing beauties of the ballet were filmed separately, and the men’s solos superimposed. Jerome Tisserand had the first solo, of fluttery entrechats; Joshua Grant was soaring in his sisonnes; Dammiel Cruz brought effortless majesty to his developpes; Kyle Davis fired off his Prix de Lausanne-winning turns; and Tharp’s whole high-low hijinx of American movement vocabularies felt wonderfully weird as ever beneath those aquarium-like fluorescent lights.

PNB’s next stream, in December, is Balanchine’s “Nutcracker;” then in February they present Jean-Christophe Maillot’s “Roméo and Juliet.”