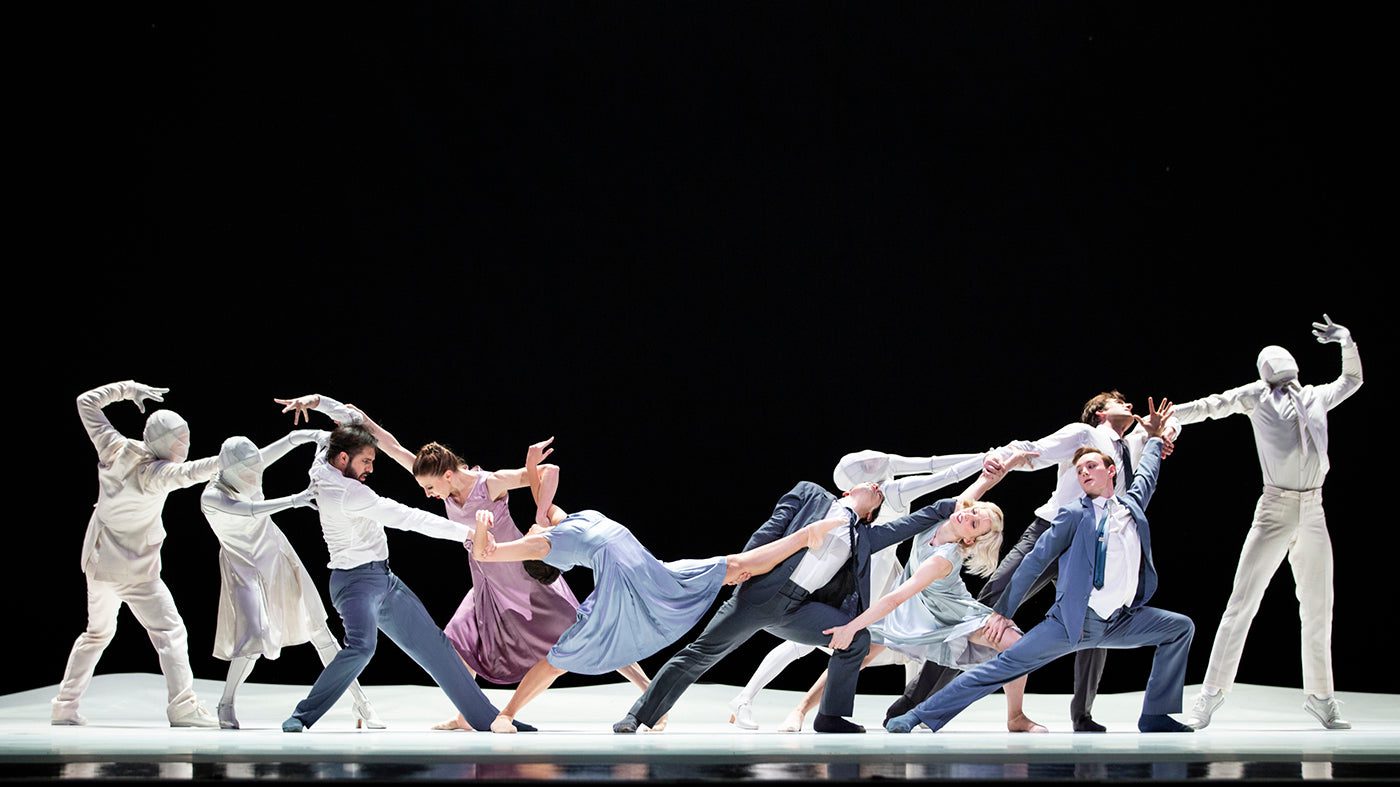 Recently, when a fellow San Francisco-based critic told me how much he had “resented” watching dance on screen during the pandemic, I had to say that for me there had been an upside: getting to know Pacific Northwest Ballet.

Prior to shelter-in-place, I had thought of PNB as a Balanchine company with a smattering of respectable mainstream commissions, not realizing that artistic director and former New York City Ballet principal Peter Boal must have headed downtown to see works by avant-gardists like Susan Marshall on his nights off from Lincoln Center. He seems to have a taste for unpretentiously experimental work that feels more like movement theater than ballet with a capital “B.” That’s continued with this fourth repertory program of PNB’s 2021-22 season, which fortunately the company has continued to offer online alongside in-person performances.

The major work here is Crystal Pite’s “Plot Point,” created for Nederlands Dans Theater in 2010 and first danced by PNB in 2017, but the new work is Robyn Mineko Williams’ “Before I Was,” and it is peculiar, contemplative, and refreshing. Williams is a former Hubbard Street dancer still based in Chicago, and for this second PNB commission she has collaborated with composer-performers and fellow Chicagoans Macie Stewart and Sima Cunningham, formerly known as the indie band OHMME. Their score here is a stunner, at first grand and cinematic (think soaring horns and strings), but with a Copland-esque feeling of dignity. As it goes on, with the singers appearing onstage as a kind of ghost presence in white, singing in tight harmony, it becomes tenser and more minimalist.

The action and the score feel equal, and thoroughly integrated. The curtain rises on two children playing rock-paper-scissors in the dark; they pick up their flashlights and enter a house (simple but effective set design by Andrew Boyce and Williams), and come across two bodies: their future, grown selves, danced by Leah Terada and Christopher D’Ariano. The relationship is intimate, playful, still innocent in adulthood, qualities that ooze from these two unmannered dancers. But though these two seem almost Edenic together, when he lifts her on his shoulders, she flails, and as they kneel the two-child selves come to soothe their foreheads. Terada is the emotional center of the work and has a solo in which you wonder whether her innocence will break, but it doesn’t—in the final dancing together she and D’Ariano again smile and gambol and play hand-games, even as the sung text (written by Stewart and Cunningham) repeats “And smaller. And smaller. And Smaller,” and bursts forth with “Today I was a pebble in someone’s shoe.”

I still don’t know what to make of the disjunction between that text and the continually tender rapport between Terada and D’Ariano, but I like it. Though in her program note Williams writes of being inspired by the “uninhibited authenticity” of kids and how she seeks it in her adult self, thanks to Stewart and Cunningham’s text I found myself thinking about intimate partnership—how even when it is ideal we lose ourselves in it, and that is still a kind of loss. I found myself thinking of two particular couples I know who have been together since high school, how their love is both beautiful and a tiny bit creepy to me. I found myself holding a combination of wonder and unease that I think testifies to what is subtle and distinctive in Williams’ work.

Pite’s “Plot Point” makes you understand in an instant why other critics find the former Ballett Frankfurt member’s work worthy of obsession. I want to call it a meta-analysis of story conventions and noir tropes that uses Bernard Hermann’s score for Alfred Hitchcock’s Psycho as ur-text, but any summary of it seems grossly reductive. Suffice to say there are maquette-like figures in white that represent the story tropes, and “real” people in Hitchcockian costumes who are manipulated by the maquette figures with scenic designer Jay Gower Taylor’s maquette-like world, which culminates with a terrifically otherworldly forest of wavering-white-line trees.

The irony here is that this ballet about the psychological power of narrative conventions is itself non-narrative, yet intellectually stimulating in every scene. It’s a great credit to PNB that Pite let them take it on and in fact that she revised the work down to 32 minutes from its original 47 while working with the company. In this edition, Elle Macy and Miles Pertl are especially memorable as the two lovers meeting under lamplight—the ever-slinky Macy could have been an NDT dancer in another life.

The program ended with the PNB company premiere of a spectacular but shallower work, Justin Peck’s “The Times Are Racing,” made on NYCB. It’s one of his rockin’ out sneaker ballets, quite similar to “Hurry Up, We’re Dreaming” at San Francisco Ballet, but to the drum and synthesizer driven music of Dan Deacon. On the one hand, I love the whole “celebration of youth” thing Peck does, and the varied street-chic costumes by Humberto Leon that emblazon t-shirts with words like PROTEST and DEFY; on the other hand, it seems a little insulting to activists who actually put themselves in danger for important causes to make these words empty fashion slogans.

That said, compositionally there’s a lot to enjoy here in what Peck does with a cast of 20, and “The Times Are Racing” showed off the company well. Kyle Davis was the blue-jeaned Everyman whirling through and even dancing a little soft-shoe with James Yoichi Moore. Mischievous Lucien Postlewaite had bunheaded Elizabeth Murphy had the long, time-bending pas de deux of clever repetitions, and the connection between them crackled.

David Parson’s “Caught” was also on this program when it was danced live, but Parsons withheld permission to film for the digital offering. One wonders if PNB will continue to offer digital performances for 2022/23, when the company premiere of Pite’s “The Season’s Canon” will be on offer, and world premieres by Dwight Rhoden, Kiyon Ross, and Annabelle Lopez Ochoa. One hopes.