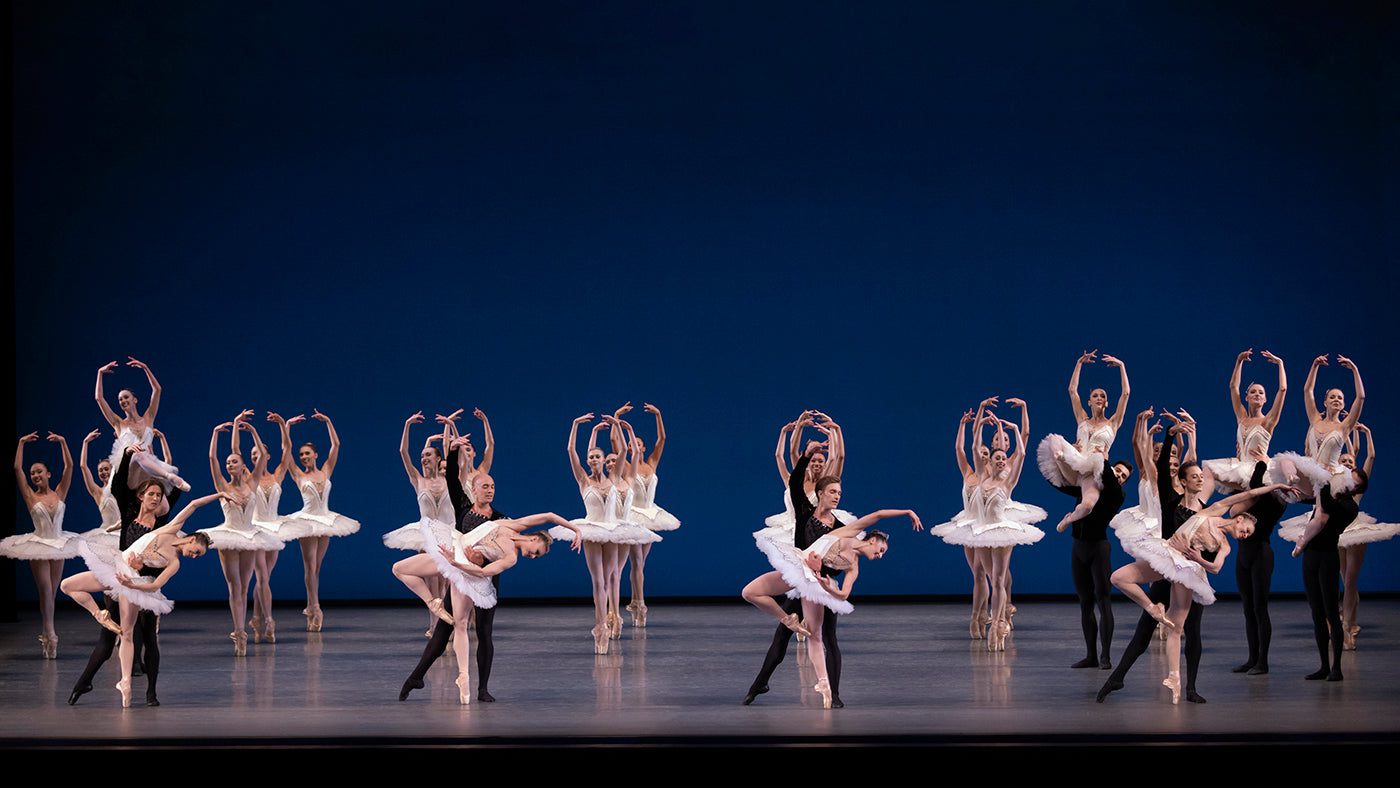 After an 18-month shutdown, New York City Ballet is back

It was a historic event. The New York City Ballet performed at the David H. Koch Theater on Tuesday, September 21st for the first time in 18 months. The audience was entirely vaccinated, entirely masked, and even more revved up than a Fall for Dance crowd. Dance legends were scattered all around, Edward Villella sat prominently in the first row. It was a cathartic evening. The outpouring of love for the dancers and the musicians was immense. Each ballet received three curtain calls and a standing ovation. Confetti fell from the rafters at the end. It was wondrous to behold. Was it the best performance? Not by a long shot. But how could it be? The dancers had spent a year doing ballet barres in their kitchens. There’s a reason “work from home” has never been an option for a ballet dancer in the history of the art form. But it was a show I felt lucky to bear witness to, and one that will stay with me.

Balanchine’s spectral, moving, “Serenade” opened the bill. The curtain rose on 17 women, still as statues, shielding their eyes from the moonlight with outstretched hands. Tchaikovsky’s chords reverberated through the auditorium as the dancers waited motionlessly. This can be an emotional passage on an average weekday night; I confess I have cried through it onstage while dancing it before. It was incredibly powerful in this context. Yet, it is also a hopeful sequence. And it was the perfect way to honor the pandemic’s many losses—human and otherwise, not least of which was a significant portion of each company member’s career. I was pleased that no speeches were made at the top of the show. Those initial moments of “Serenade” were all the commentary that was needed.

As soon as the women began to move, however, “Serenade” fell apart. Due to the fact that the program was without intermissions (to prevent the audience from mingling in the lobby), there could be little overlap in casting. “Serenade” is a big ballet, and the closer on the program, Balanchine’s “Symphony in C,” is gargantuan. Ladies in the 1st movement of the last piece could not appear in “Serenade” as well. Because of this, “Serenade” was filled with a lot of new faces—and the greenness showed. Unison and diagonals were obscured, unforced errors abounded. The corps was not the only problem: the principals were often either rushing (Ashley Bouder) or late (Megan LeCrone). I can imagine the nerves going into a night like this, so I bet things will settle down as the senior dancers get their sea legs back and the younger ones get more practice.

Mishaps aside, it was glorious to see this masterpiece live again. There is a lot going on in “Serenade,” and though some of the big-picture moments were marred, there were little flashes of beauty all around. It was a case of not being able to see the forest through the trees, but what trees! There was Mira Nadon, picking her momentum right up from a year and a half ago, bending as far as she could in sous-sous and then swooping offstage before the Swimming in the first movement. And Mimi Staker, joyously bouncing through her arabesques and penchés in the Russian Dance. And also India Bradley, soaring across the stage in the Flies. At one point I got lost in the loveliness of Isabella LaFreniere doing simple soutenus to posed tendus in the finale. Ashley Bouder delivered a heart-stopping moment in her long jump through the air into Aaron Sanz’s waiting arms in the Elegy section. And Adrian Danchig-Waring made a zingy debut as the Waltz Boy, a role often approached with a subdued, “old reliable” mentality.

The middle piece on the bill was Christopher Wheeldon’s “After the Rain” pas de deux, performed by the imminently retiring Maria Kowroski and Ask la Cour. When the curtain rose on them calmly standing there—a theme of all three pieces—it was already impressive. They are two tall willows. Slowly, they rocked back and forth, rolling through their feet. Their long lean frames made the simple transfer of weight from one foot to the other engrossing. It saddened me that we are about to lose these artists, and these bodies, in this context. La Cour was dancing with a newfound pathos, each small step seemingly felt up through his spine and to his brow. And Kowroski, for all her years, has none of the physical markers of degeneration that are common in ballerinas who dance into their 40s. Her arabesque has not lowered, she shows no signs of strain, her knees are not bending when they shouldn’t, there is no stiffness or tension in her upper-middle back, she is not shaky or brittle. (Yes I know, ballet is cruel!) With her bouncy brunette locks and her baby pink camisole leotard, she looked like a Collector’s Edition Barbie Doll taken out of the box for the first time.

Any lingering melancholy turned to hope when the curtain lifted to expose the corps women standing in glittering tutus for “Symphony in C.” There in the back row were a trio of promising redwood saplings: Miriam Miller, Christina Clark, and Emily Kikta. They had excellent company: Olivia Boisson, Jacqueline Bologna, Meaghan Dutton-O’Hara, Laine Habony, and Emma Von Enck. Demi-soloists Olivia MacKinnon, Ashley Hod, Daniel Applebaum, and Christopher Grant completed the strong, precise cast. This 1st movement was a highlight of the performance, with Megan Fairchild (miraculously back on the stage after having twins 5 months ago!) and Joseph Gordon confidently leading the team.

Gordon’s newly long hair whipped furiously in his turns. His hairspray could barely handle so many brilliant pirouettes. He should consult Daniel Applebaum, who flanked him on the right, and who has perfected long ballet hair. Though it seems funny to note dancer hair styles, hair emerged as a huge story of the night—not unlike how haircuts, and the lack thereof, became a nationwide plotline during quarantine. At City Ballet, Sterling Hyltin and Harrison Ball had chopped theirs. Gretchen Smith and Megan Fairchild went from brown to blonde. Marika Anderson went from rainbow back to brown. And most radically, handsome Tyler Angle led the 2nd movement of “Symphony in C” with no hair at all. I can’t remember ever seeing a bald head on the NYCB stage before—history in the making. Let’s hope it’s not the only glass ceiling that’s shattered at the ballet this year!

Angle and Sara Mearns danced a controlled, intense 2nd movement. When she slowly draped over his knee in the last notes, I imagined she was down for a deep Sleeping Beauty sleep. But the 3rd movement dancers were snappy enough to awaken anyone. The demi-soloist pairing of Mary-Elizabeth Sell and Gilbert Bolden III was inspired. They smiled so much my cheeks hurt smiling behind my mask too. Likewise, the leads Indiana Woodward and Harrison Ball were gleeful and impressive.

But my biggest smile of the night was reserved for Lauren King, who led the tricky 4th movement. She is one of the finest interpreters of this role—in a league with Tiler Peck and Pascale van Kipnis. In fact, with her auburn hair and her winking grin, she evoked the Riverdance spirit of the latter in all the stompy pointework. Unfortunately, “Symphony in C” is a one-off this season, and King retires in a few weeks. So this was her last time leading the charge in one of Balanchine’s most epic works. Well, she nailed her last hurrah. No Covid rust or return-to-the-stage nerves in sight. Andrew Scordato squired her with devotion and a grin to match hers. The entire cast of 47 was beaming by the end, they seemed so happy to be back where they belong. Though a lot of dancers are retiring this season, and many quietly left during the pandemic, this jubilant performance of “Symphony in C” was a reminder to cherish every moment we get of dancers dancing. To judge by the audience response throughout the evening, it was clear that everyone was doing exactly that.