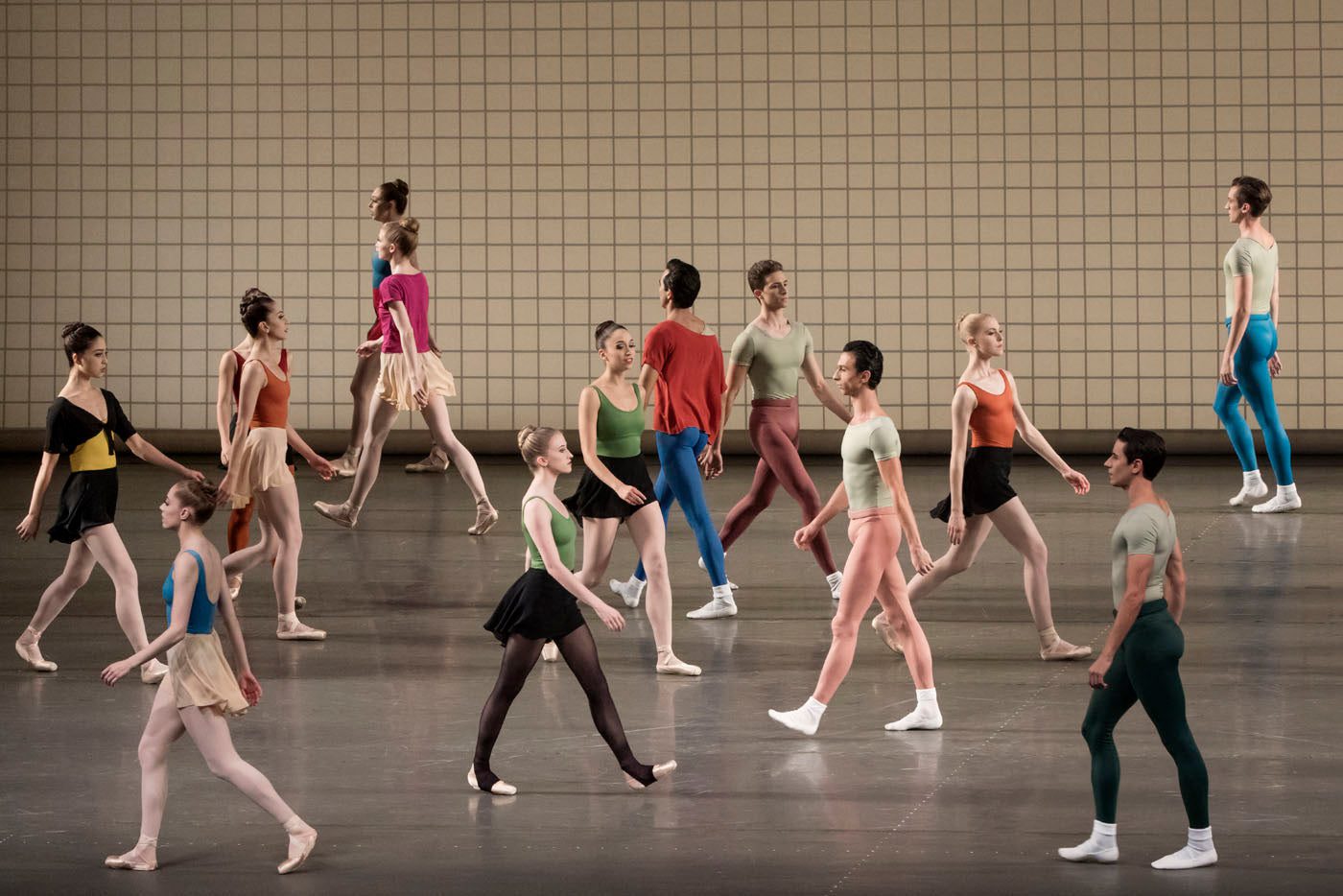 In less than a month, New York City Ballet will unveil its “Robbins 100” festival at David H. Koch Theater in New York to commemorate the centennial of Jerome Robbins’ birth. In the course of a three-week period, the company will present six distinctive programs, featuring 19 ballets by Robbins, plus two world premieres, including a new ballet by Justin Peck choreographed to the music by Leonard Bernstein.

During NYCB’s recent sojourn at the Kennedy Center Opera House, the company presented an all-Robbins bill that comprised “Glass Pieces,” “Fancy Free,” and “The Four Seasons”—a perfect sampler of some of the most popular pieces by the great American choreographer and a warm up for the main celebration ahead.

Robbins regarded “Fancy Free” as his “first real ballet”—everything else he created before it he called “sketches.” The year was 1944. The country was still in the midst of the war; and sailors were going to the faraway battlefields, shipping out from the port of New York. At the time Robbins was just 25-years old, a rising dancer with Ballet Theatre (now American Ballet Theatre) with a talent to boot and a desire to create ballets about “subjects of our own land rather than Russian fairy tales.”

So it’s no surprise that there were no princes and fairies in “Fancy Free,” just three sailors on shore leave looking for a drink, a date and a good time—a snapshot of the ordinary life in wartime New York and, as it turned out, a formula for success. “Fancy Free” proved an instant hit and a record-setter (there were more than 20 curtain calls on opening night; the ballet received 162 performances during its first year and shortly after its premiere morphed into the Broadway musical “On the Town”) as well as a career booster not only for Robbins, but also for the ballet’s composer Leonard Bernstein and set designer Oliver Smith.

It’s a tall order to pull this piece off the way it was envisioned. Every gesture, every turn, every glance in this ballet is carefully choreographed and staged to give an authentic representation of the subjects and the period. And it was a real pleasure to see a performance that did justice to the original text—the opening night cast did a terrific job keeping the charm and the vibe of the era genuine and alive.

As the first sailor, Roman Mejia brought to the role his great technique (his double-air turns in a split looked effortless and sharp) and loads of charisma. His character is a charmer and a show-off; and the sheer excitement and masculine bravado of Mejia’s dancing perfectly expressed his hero’s easy-going and relentless nature.

Harrison Coll was dramatically convincing in the role of the second sailor, a gentle guy with a heart of gold, at once naive and sentimental. His romantic duet with Sterling Hyltin looked utterly touching; and his pantomime scene where he boasts about his military escapades was comedic genius.

Sebastian Villarini-Velez, as the third sailor, was appropriately hapless but ardent nevertheless, his hip-swiveling rumba (or danzón) a dance approximation of hope and regret. The striking Miriam Miller imbued the role of the Girl No. 3 with a super-model glamour; and the indomitable Mary Elizabeth Sell was the embodiment of no-nonsense attitude and determination as the Girl with the Red Purse, a tough cookie, who is not so easily wooed or intimidated.

If “Fancy Free” is a complete opposite of a ballet-fairytale, his “Four Seasons” is a spoof on 19th century ballet divertissements, with allusions to classics like “The Nutcracker” and “A Midsummer Night’s Dream.” Set to the Verdi score, this big and flashy but ultimately delightful ballet has four distinctive parts; each depicting a particular season, each packed with technically challenging dancing. The ballet was created in 1979 with a reason: “to showcase the company’s newest acquisition, Mikhail Baryshnikov,” wrote Amanda Vaill in her biography of the choreographer titled Somewhere. (The Russian star didn’t stick around for long, leaving New York City Ballet the following year to assume artistic leadership of American Ballet Theatre.)

In addition to the demanding classical steps, “Four Seasons” is filled with wit and humor. “Winter” is a wild evocation of an ice skating party, featuring a flock of shivering snowflakes, while “Fall” is “an over-the-top bacchanal, whose cavorting satyrs, careening nymphs, and leaping, leering Pan figure are reminiscent of Leonid Lavrovsky’s Soviet-era “Walpurgis Night.”

There were many notable performances on opening night. Keeping her dramatic excesses in check, Sara Mearns was particularly compelling—uncharacteristically reserved, even fragile, dancing with a palpable freshness and ebullience in “Spring.” Her partner, the suave Tyler Angle, provided her with a competent support and was assured and ever gallant. Ashley Bouder brought an air of mystery in her evocative pas de deux with Joaquín De Luz in “Fall,” rendering the choreography with an exotic flair and allure; and Ashley Laracey and Taylor Stanley vividly played out the heat of “Summer.”

Just like “Fancy Free,” Robbins’ “Glass Pieces,” from 1983, is an apt reflection of the atmosphere of the time. Choreographed to musical pieces by Phillip Glass (thus its title), the ballet translates in movement the inexorable power of human energy and spirit. From the opening section’s pulsating rush-hour crowd, to the central cryptic pas de deux (performed with an exceptional skill by the divine Maria Kowroski and Russell Janzen) set against an equally enigmatic chorus of the corps de ballet, to the vigorous and bracing ensembles of the finale, “Glass Pieces” still retains its sense of novelty, freshness and exhilaration, even after all these years since its creation—a testament to the genius of the man who made it.

Previous
Music of the Ballet