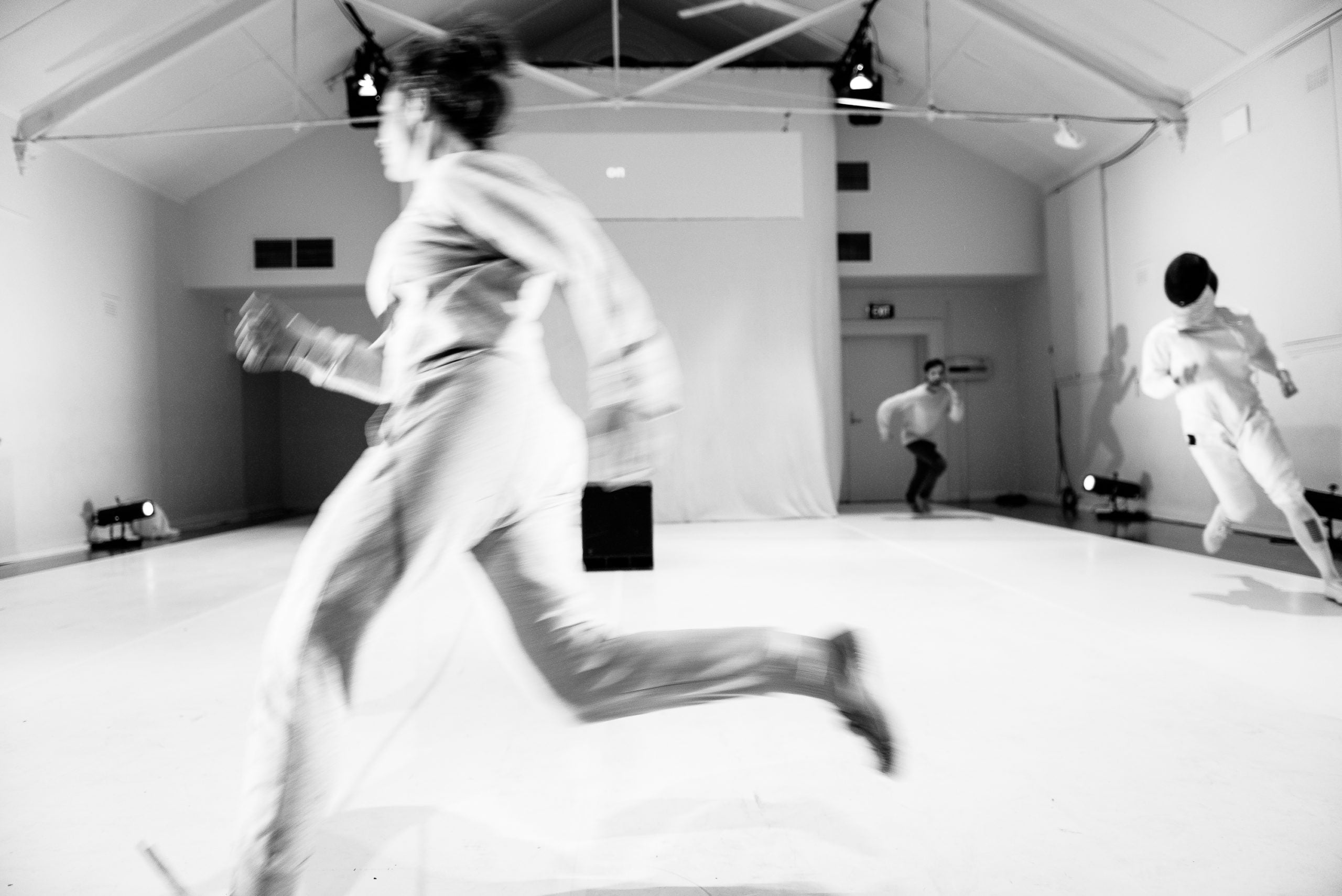 To begin, it is all about numbers and the patterns they form. One inaugural award, the Keir Choreographic Award, dedicated to commissioning new choreographic work and fostering innovation in contemporary dance both nationally and internationally.

One biennial prize of $30, 000, with the intention to raise “the profile of and cultivate new audiences for contemporary dance within Australia by commissioning and presenting new choreographic works in a competitive context.”1 With a second work to be awarded a $10,000 prize, determined by audience vote.
From some seventy-seven applications, eight talented and diverse semi-finalists—Sarah Aiken, James Batchelor, Tim Darbyshire, Matthew Day, Atlanta Eke, Shaun Gladwell, Jane McKernan and Brooke Stamp—were drawn and commissioned to develop a new work.

Each semi-finalist was given 100 hours of studio access, and two months concentrated development time, an artists’ fee, and a production budget enabling them to work with up to five collaborators from lighting designers, visual artists, sound engineers, and others.

The result: eight commissioned multi-disciplinary works (each between 20 to 25-minutes in length) presented before an international and national line-up of five judges as diverse as the artists and works themselves—Mårten Spångberg, Matthew Lyons, Josephine Ridge, Becky Hilton, and the Award’s visionary, Phillip Keir—and an audience of wide-eyed enthusiasts.

From eight semi-finalists comes four finalists*, and from four comes one winner**, but, really, it is all about dance, and the commitment to newness in contemporary dance, above all else.

In the end, it is not a numbers game, but a willingness to negotiate uncharted waters, pushing the absolute limits of what constitutes dance. “This award is about bringing a little more attention to this art form which, quietly but firmly, organises our bodies in space and our minds in our bodies, and to its makers who relentlessly craft those journeys,” 2 explains Angela Conquet, the artistic director at Dancehouse. All eight works, seen during their two-week season at Dancehouse, question the very definition of dance, of the body in orchestrated movement, and in turn ask: what is choreography? Some do so gently, some do so aggressively, some quietly, and some with a triumphantly tuneless trumpet blast (Brooke Stamp’s “Tearaway—Part One: The Crater of Motor Power”), but all seem in accord that it begins in the body. Brooke Stamp, choreographer and performer in Program One, illustrates this through both her performance and her words, “I think that a lot of people in this award are thinking about choreography as being grounded in the body but moving beyond that and into objects, visual art and sonic spaces.”3 The stage for her work dotted with props, some called upon and made animate, and all the while the legacy of Isadora Duncan and Martha Graham keenly felt. Stamp’s beautiful and brief dance with her projected shadow on a suspended cloth depicting through line the figure of a dancer is perfectly balanced by the trumpet’s brashness.

Indeed, dotted throughout all the performances, little gems: the humble one-handed prop against the wall to remove one’s shoes celebrated in Tim Darbyshire’s “Entitled Title (Working Title)”; the meditative repetition of the 8 x 8 grid played out in different configurations of bricks, and the water-like reflections of the plastic sheeting on the ceiling of the upstairs studio at Dancehouse in James Batchelor’s “Escape to the Infinite;” the quiet humour winked at in the seemingly random sequences of the individual that slowly reveal themselves to be unified, shared, and passed down in the choreographic language that is Jane McKernan’s “Mass Movement,” and the slow, fated tumble of three soldiers in Shaun Gladwell’s “Dead Flag Blues.” From the slow build of increasing intensity in Matthew Day’s “Rites,” echoing “Rite of Spring” (1913) and the choreography of Vaslav Nijinsky to the frame within a frame within a frame, in-your-face prodding of Atlanta Eke in her aptly named allegory of the present, “Body of Work,” this investment in dance is what we need to see more of.

Of particular strength, the considered beauty of Sarah Aiken’s “Three Short Dances,” which features a dance of increased rhythmic effect between three large cut-out shapes that, as sound builds, appear to almost pulsate, thereby questioning our understanding of what is dance. Objects can be made animate, if our patience holds, and slowly a rainbow-sacked larva is revealed on the floor, it metamorphoses before our eyes, shedding its encasement and unfurling its wings. But it is the third dance, in which a series of six fine timber rods are balanced on the body that remains the most striking visual. Before my eyes, one moment an imagine synonymous with a bird cage, the next, a tightrope walker in meditative trance, before finally assuming a slowly spinning hybrid porcupine, with quills near grazing the walls. Balanced atop the head, and across each shoulder, within both hands, the appearance is mesmerising when coupled with the sound design and performance of Daniel Arnott.

Asked to question what we see and redefine what we think we know, I take especial delight in watching the stage being prepared in between the performances in both the upstairs studio and downstairs theatre. It reads like a part of its own performance as plastic sheeting is unrolled and props are quietly placed in assigned positions. And it is in this moment that I am given space to absorb what I have seen and ready myself for the next journey into the unknown.

These commissioned works are in glorious flux, still assuming final shape, dust still settling. Akin to the soldier’s awkward dance performed on a pair of crutches, with the legs not allowed to touch the ground, in “Dead Flag Blues,” these works are not for the idle. As they should, these works ask a lot of the audience. They are “new and unsettled”4 in both their feel and energy, notes judge Becky Hilton. And from where I sit, this is what the award is all about, and it is exciting.