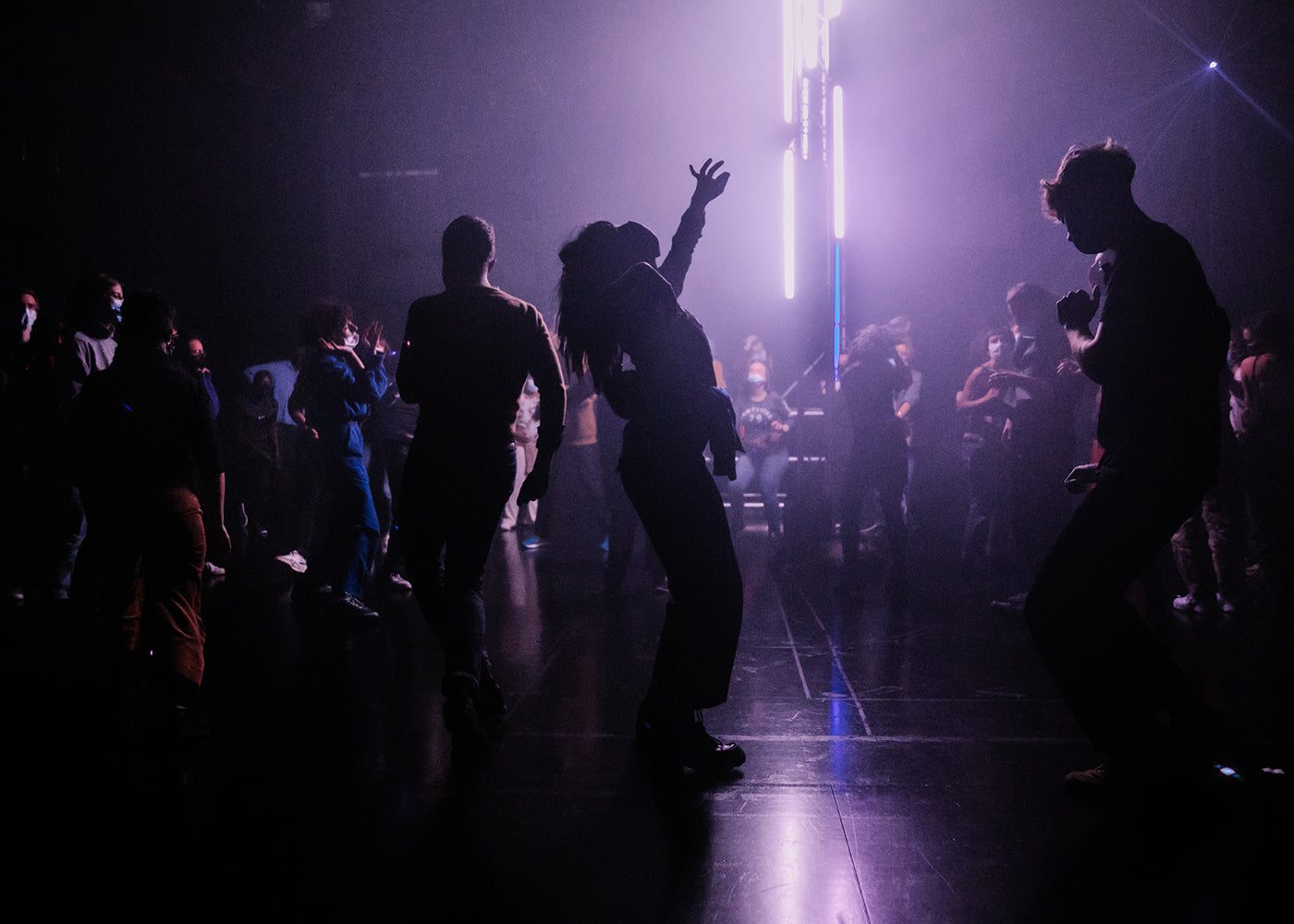 Mette Ingvarsten's “The Dancing Public” at Tanz in August

I am sitting at a bar with a glass of wine waiting to watch Danish choreographer Mette Ingvarsten’s “The Dancing Public” as part of Tanz im August festival. Part dance party, part spoken word concert, the piece, according to press materials, aims to consider the 14th-17th century phenomenon of dancing plagues in our current post-pandemic context. “I hope there’s not going to be audience participation,” says one of the friends I’m attending with. Of course, from that moment, our fates were sealed.

After making our way from the bar to Berlin’s Sophiensaele theatre, we (attempt to) enter the performance space. It feels more like trying to get into a nightclub than a contemporary dance show: one friend tries to wade through a line of people queuing for the waitlist to try and get her press ticket, another’s QR code doesn’t work at the stage door, we can’t find anywhere to buy water, and as the group gets seperated, we resort to texting “where are you? I’ll save you a seat,” until we finally reunite in the hot, sticky auditorium.

There, it becomes apparent that sitting down isn’t part of the programme. A relatively spartan room with unpainted walls, exposed rigging, and vertical neon strip lighting adorning each corner, the performance space is devoid of seating aside from a couple of platforms constructed out of metal poles and wooden panels, which tempt more sluggish audience members to take a perch on the sidelines rather than stand amidst the throng of the growing crowd.

Almost imperceptibly, Mette Ingvarsten, the sole performer of the piece enters the room. Wearing a simple costume of a tank top, cycling shorts, and black boots, she announces her presence with a repetitive chant—“Tonight is for dancing, my eyes will be dancing, my tits will be dancing, the sky will be dancing”—that is accompanied by a pulsing techno soundscore. Weaving her way through the crowd as she speaks, adopting the classic “side to side” rhythmical sway seen in clubs world wide, Ingvarsten catches people’s eyes, silently encouraging them to mirror her motions. While some stand resolutely in place, only moving when they want to change position or get a better view of the performer when she moves out of their vision, others copy her. At first awkward, they slowly get more confident, generating an energy that ripples through the audience and inspires motion elsewhere.

“Tonight is for laughter . . . dancing . . . feelings” Ingvarsten continues. After a while, she climbs up on one of the stages, displacing the people who have set up camp there and forcing them into the crowd. In her new position, she begins to recount uprisings of maniacal dancing, or “dancing plagues” that have happened throughout history. They were particularly prominent in Europe between the 14th and 17th centuries as a result of the stresses of the periods (or the devil, depending on who you listen to). According to Ingvarsten, whole towns would be overtaken by uncontrollable movements that would travel from one person to another, a transference of energy that the choreographer is presumably attempting to recreate in this piece.

Leaving the stage, she re-enters the audience, her movements getting larger and wilder. She shakes uncontrollably, makes screeching noises, stumbles unsteadily on her legs, convulses her torso, climbs up a strip light like King Kong on the Empire State building, and, at one point, even barks like a dog and adopts a canine physicality. Her hair loose and skin sweaty, she reaches out and places her hands on people’s arms and shoulders, presumably hoping to pass on her affliction to others.

Individual elements of the movement language are engaging: tribalistic facial expressions in which Ingvarsten bulges her eyes, sticks out her tongue, and obsessively scratches at her limbs are particularly effective. However, in general, the choreography is neither abandoned enough to be convincing as mania, or crafted enough to be intricate and hypnotic. (I’m thinking of Isreali choreographer Sharon Eyal’s similarly club culture inspired works, in which dancers mesmerizingly repeat gestures, pushing the movements and themselves to their absolute limits.)

Ingvarsten’s commitment to speaking coherently throughout the majority of the piece in order to impart facts and figures about dancing plagues from her thorough research, is potentially responsible for preventing her full on descent into insanity. The way she “raps” at one point also feels slightly out of context and uncomfortable. This said, the text does offer some interesting food for thought: Ingvarsten’s mention of the rise of Charleston during the 1930s depression in America, makes me think of how as a medium, dance has repeatedly been used as a cathartic outlet during tough times. As choreographer Hofesh Schechter put up in neon lights at the end of his seminal work “Political Mother” (2010), “where there is pressure, there is folk dance.”

The world’s been under a lot of pressure over the past two and a half years, yet the nature of the crises meant we were prevented from the tried and tested outlet so many have used before us. With this in mind, it may seem like an odd choice for Ingvarsten to attempt to draw parallels between dancing plagues, the Covid-19 pandemic, and club culture in “The Dancing Public.” However, there is something incredibly touching about the enthusiasm of the audience to stay for a dance at the end of the show. Even after Ingvarsten has exited the space, the thumping music keeps playing, inviting the party to continue in the choreographer’s absence. Individuals who were unwilling and audience participation-averse at the beginning of the show now give themselves over to the music of their own volition. It’s beautiful to watch the simple joy that can be found in collective movement, which proves dancing should no longer be considered a demonic-induced pandemic, but a powerful and potent way of coping with them.

Previous
This Just In

Next
Fame! with Rafael Bonachela