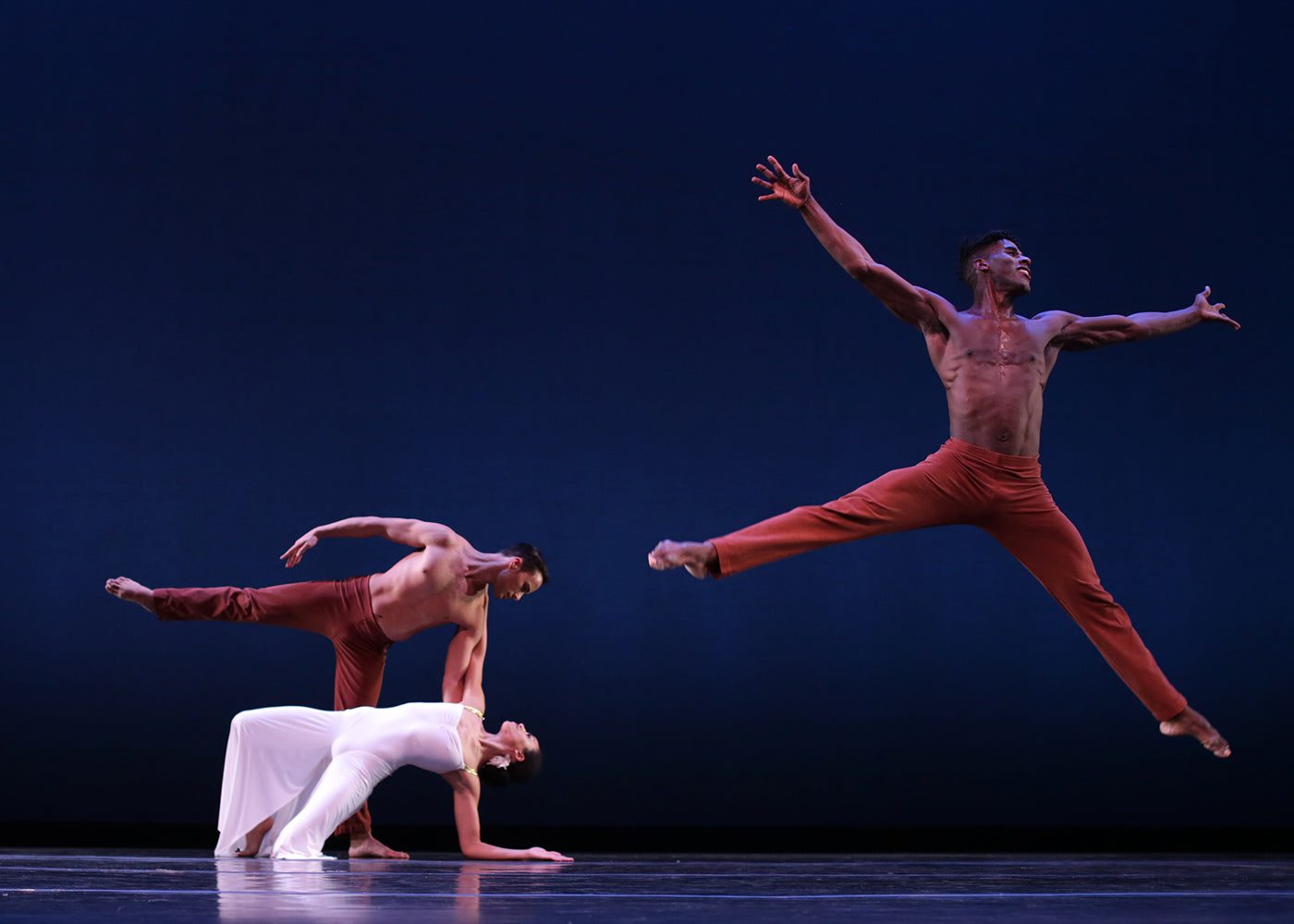 Opening night of Martha Graham Dance Company’s run at the Joyce Theater was a momentous occasion. Not only did this engagement mark the MGDC’s return to live performance in its home city—a milestone nearly every other marquee company based in New York City has been celebrating this fall—it was also the start of the company’s 96th season. On Tuesday October 26, 2021, the company dancers were in fine form despite more than a year of pandemic protocols, carrying on Martha Graham’s legacy with technical virtuosity and dramatic intensity.

The program opened with Graham’s joyful 1948 work, “Diversion of Angels.” In a pre-show speech, artistic director Janet Eilber mentioned that this dance, made for three couples and a small ensemble, could be interpreted as highlighting three different women—one dressed in red, one in white, and one in yellow—or one woman at three different stages in her life.  If one were to go with the latter interpretation, it would seem to cast the ensemble in the role of time, sweeping across the stage with sautes and swirling through the couples to create bright and playful transitions. The woman in red, So Young An partnered by Lloyd Knight, was flirtatious and inviting while the woman in yellow, Marzia Memoli partnered by Richard Villaverde, was youth incarnate and seemed to have springs for feet that allowed her to jump incredibly high into the air with very little preparation. (I heard audible gasps in the audience when Memoli leaped spontaneously onto her partner’s shoulder.) Both served as foils to the woman in white, the calm and regal Natasha M. Diamond-Walker partnered by Alessio Crognale but all three women were unapologetically dominant.

Diamond-Walker, and the fabulous length of her limbs, were a vision to behold, maintaining difficult adagio positions and doing so with apparent ease from start to finish. It was a reminder of how balletic Graham can be; in some phrases Diamond-Walker seemed to do as many penchee arabesques as any Giselle. A gorgeously crafted duet for the white couple was composed of striking architectural moments between the two dancers, along with enough space and time to absorb them. In one such moment, Diamond Walker stood over a prone Crognale; sensing her presence, he lifted his upper body and legs up, bending his knees to offer her a seat on his feet. As she sat, she created a right angle in front of her chest with her forearms. Something about the deliberate sequence of movements was so touching, I might have gasped.

“Diversion of Angels” was followed by the “newly recovered” Graham solo “Immediate Tragedy,” with “danceturgy for reimagining” by Neil Baldwin. This was the first time the work has been seen onstage, and it was a gift to see Xin Ying tackle it. The solo, which premiered in 1937 and was subtitled a “Dance of Dedication,” was created in solidarity for those who suffered during the Spanish Civil War. As soon as Xin strode onstage, she began carving through the air with her arms and torso, creating spiral shapes for her body to orbit around. With her hair tied back in a red bow and a glimmer of red fabric visible from the underside of her voluminous floor length skirt, she brought a spirited Spanish flair to this lamenting dance without slipping into caricature. Her fists reached behind her as her body contracted forward, they even pounded the stage, and yet she avoided melodrama by fully committing to the unyielding intensity—her body moved pliant metal, bending without breaking. Her interpretation of Graham’s choreography was raw and ultimately, relevant. The solo ended defiantly with Xin upright, walking toward the audience as the lights went dark.

Next up in the program was the world premiere of Andrea Miller’s “Scavengers.” After two Graham pieces, the fluidity and vulnerability inherent in Miller’s movement vocabulary was welcome. The first duet with Leslie Andrea Williams and Crognale immediately set a new tone as the pair traversed the stage with arms and heads flung behind them in abandon, her orange silky dress flowing freely. A voice sang long notes of “oooooo” and it felt as though these two had been let loose in a field of wildflowers at night. The virtuosic partnering continued into the second duet with Jacob Larsen and Marzia Memoli, though the mood morphed with a music and lighting change to a setting that felt more interior and cosmopolitan. There also seemed to be a shift in power dynamics: whereas Williams had seemed to lead Crognale with a confidence, Memoli’s choreography grasped and clinged to Larsen. They exited the stage with a rotating lift where Larsen seemed to hypnotize Memoli with his hand hovering over her face. The third and fourth duets continued in the same vein with expert partnering and lovely dancing, but something seemed amiss. Perhaps it was the representation of four cisgender, heterosexual relationships in a row, complete with women being whipped around and dragged across the stage by their limbs. After so much manhandling, Anne Souder’s solo felt necessary. Wrapping her arms around the space, she seemed to be dancing with a memory or a ghost; but as the solo progressed, she began dancing with no one and for herself, hugging her knee in tight with her arms before letting her limbs explode out. Ending the work with Souder’s solo, with its homage to Graham floor work, added a much needed layer to a dance that ultimately felt a bit dated.

Disappointing premiere aside, the evening closed with a natural coda: Graham’s iconic “Appalachian Spring” (1944), complete with music by Aaron Copland and set by Isamu Noguchi. Eilber described it as Graham’s contribution to the war effort, cheering on a nation in the darkest days of World War II. It felt a little sad to watch a hopeful and earnest dance about the beginning of the American empire—seeming to revere the troubling doctrine of manifest destiny—at a time when it often feels like we are witnessing its slow decline; and yet, we also seemed to be another audience in need of cheering after all the last 18 months has wrought. However, racism underpins “Appalachian Spring’s” pioneer story: a one-sided affair that does not acknowledge the genocide First Nations and Indigenous peoples suffered at the hands of such pioneers (a footnote to give this context or even a land acknowledgment from MGDC would be a positive first step). On one hand, I wonder why this work continues to be programmed given its problematic premise. On the other hand, there is Noguchi’s flawless set design, Graham’s brilliant organization of tableaux within it, and music that drives such myth making.

Noguchi brought a refreshing minimalism to the stage with simple wood structures and furniture that still look modern today. And that collaboration clearly sparked Graham’s imagination, prompting her to create scenes where the dancers posed around the space demand as much attention as those on center stage. When it came to the Bride and the Husbandman, Anne O’Donnell and Lloyd Manor, that fervent dancing brought out all the passion and naïveté and solipsistic planning needed for two newlyweds on the frontier. Leslie Andrea Williams as the Pioneering Woman tempered that sometimes spastic energy with her maturity and precision, moving in a way that the most thoughtful and articulate person might speak, with pauses before revelations. Lloyd Knight in the role of the Preacher (originated by Merce Cunningham) brought necessary complication to his role, presiding over The Followers with a devotion that was ultimately brought low by what one imagines to be the crises and horrors of life, let alone one on the prairie. In a solo where he is tortured and plagued, his body seemed to almost spit out the spirit before quickly recovering his divine composure. Knight’s performance came with so much subtext, it would have been enough to watch him stand in profile on his divinely crafted “pulpit,” eyes lifted to the heavens. For their part, the four women who made up the group of The Followers did their best to squeeze all of the humor out of Graham’s extremely musical choreography for them. Eight little cupped Graham hands holding up the Preacher’s wide-brimmed hat; the moment when The Followers’ supported The Preacher, laid out on his back with his arms extended in the shape of a cross; and every time a character spent a few minutes gazing out with hungry eyes at what must have been an endless expanse of wilderness on the horizon—those are among the many powerful and complex images that remained after the curtain call.