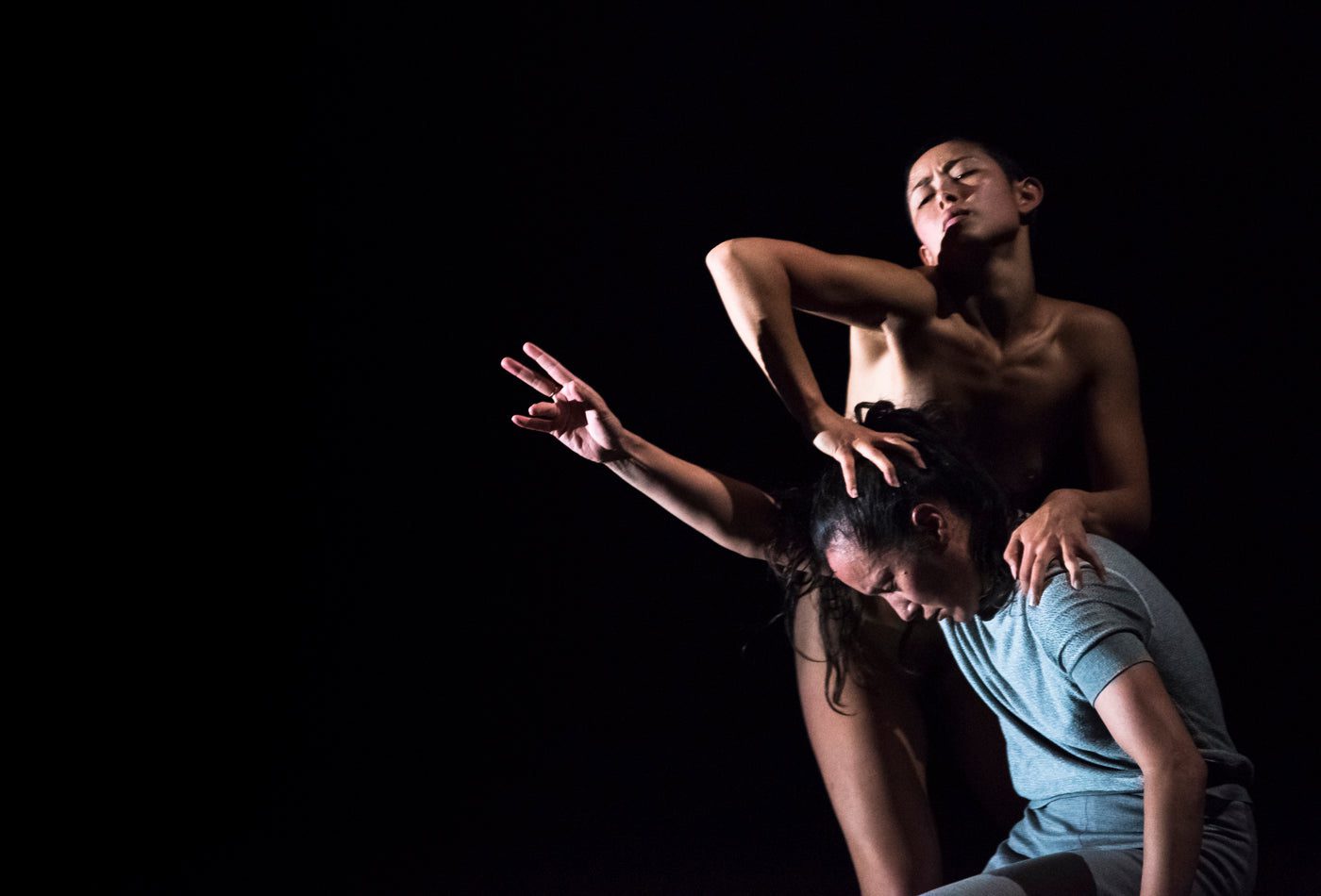 Lucy Guerin is known for her left of field works, and “Split” is no different. The scene of the performance is the Sydney Opera House’s Studio. As far as the Sydney Opera House goes, it is not a common setting for a dance performance. Rather than a large performance space, it is an intimate theatre space; dimly lit, roughly the size of a community hall. The stage is just an open space in the middle of the seats—no curtains, no props, but cordoned off with masking tape to mark the boundaries. Our bags have been security checked and we’ve been told twice that phones are not to be used during the performance. There is no hint of what is to come except the unusual.

As the lights lift, two female dancers stand on the stage. The lighting is subtle and low, and it shades parts of their bodies. It is only after a minute or so that it collectively dawns on the audience that one of the dancers, Lilian Steiner, is completely naked. The other dancer, Melanie Lane, is draped in a shapeless, knee-length olive green dress. It is as though no one in the audience dares move. Perhaps it is a collective sign of respect for this courageously naked dancer, or maybe, it is shock. But through the stillness, you can hear the audience’s internal dialogue ask—why?

After the initial revelation, the beauty of the work emerges. Lucy Guerin’s choreography is clever. While not conservative, she engages a repetitive series of steps that highlight the female form. The dancers display both grace and strength, but in key moments are necessarily coy. Meanwhile Scanner’s cathartic drum-like score rolls repetitively in the background, rocking the audience in to a trance-like state to absorb the work. Paul Lim’s lighting is also key. While hiding nothing, Steiner’s body is draped decorously in light.

In the opening sequence the two dancers perform side by side. And despite the impeccable synchronicity, you are naturally drawn to watch the nude form of Lilian Steiner. In comparison with the clothed Melanie Lane, Steiner’s movements felt more physical, performed with greater strength and vitality. I’m not sure why. Perhaps because the audience can see her every muscle? Or perhaps it is just sheer curiosity, wonderment at her bravery? I felt both honoured and challenged to watch Steiner’s performance. While museum walls drip with naked bodies, both male and female, it is less common in dance.

As the piece progresses, the dancers take small breaks to split the stage in half with masking tape. First halving the stage, and then repeating the division until only a tiny square remains within which to dance. With each new square comes new lighting phase and a new interaction—some loving, some quarrels and some ambiguous. Eventually the remaining space is so small, the dancers have run out of space, the clothed dancer kneels, with Steiner’s naked body kneeling on top. Throughout the entire performance, Lane takes the supporting role; Steiner is the clear standout in this work, but without Lane there is no contrast.

“Split,” first presented in 2017 as part of DanceMassive, is a pinnacle work for Lucy Guerin, award-winning Australian dancer and choreographer. As its name suggests, it divides you as a watcher. Was the nudity essential to the work? In the beginning, I questioned. Yet on reflection, the bravery combined with impeccable casting and elegant lighting means this unique 50-minute piece not only works, it was a privilege to watch.

Previous
Drag Me To Hell